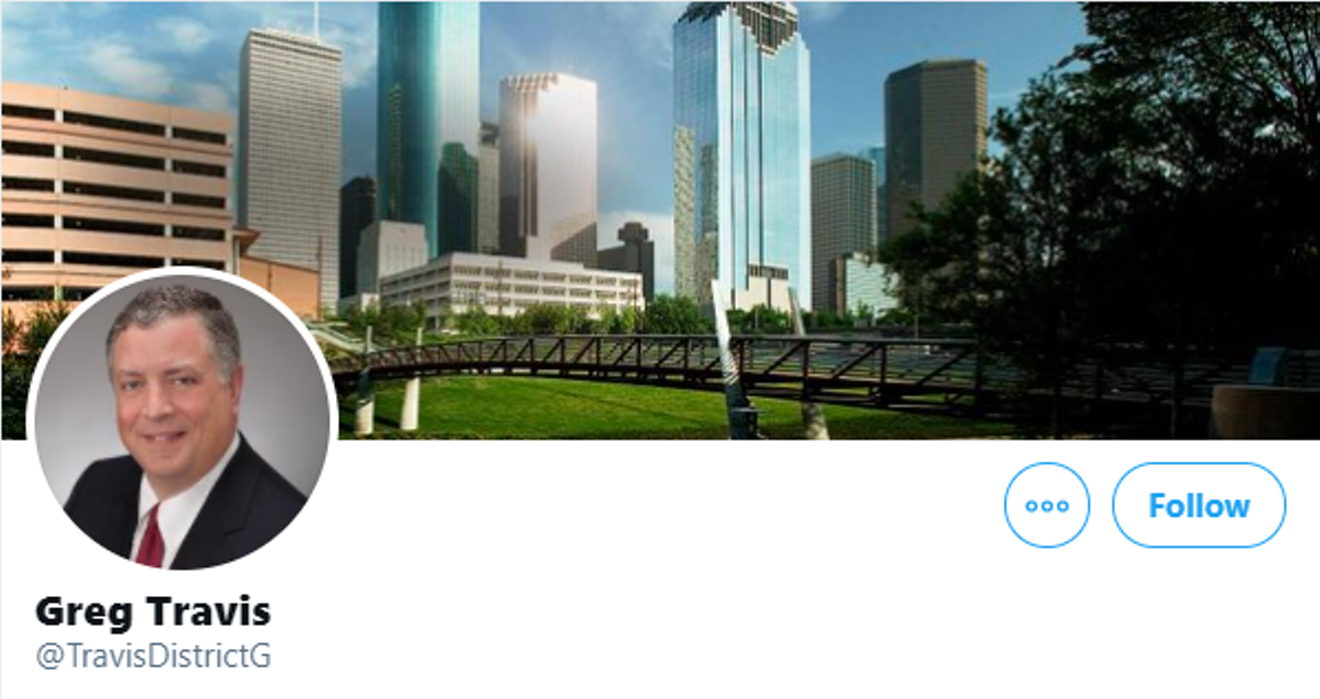 Your one-stop shop for right-wing ass-hattery. Screengrab from Twitter
Greg Travis, the Council Member from District G, Spends a lot of his time online being a complete right-wing prat and spreading conspiracy theories about wealthy Jews (or at least George Soros) stealing the election. His latest bout of verbal diarrhea is a comment about how major female political figures from the left have either slept their way to the top or only got there through affirmative action.

On December 21, he shared a popular meme on his personal Facebook page comparing First Lady Melania Trump and former First Lady Michelle Obama. The picture shows Obama sitting in a chair with her legs apart and Trump sitting with her legs crossed. The caption reads “No Comparison.” Travis tagged the meme with “yep, just saying.”

When some people began to push back against the image, Travis began spiraling into full on misogynist and racist nuttery about Obama and Vice President-elect Kamala Harris.

“It’s called Affirmative Action,” he said. “Doesn’t take much—[Obama] was born with her qualifications. She isn’t the brightest bulb in the lot. You really should look up the reason why she lost her law license. She gave it up because they were going to yank it for real estate fraud—she was ripping off one of her clients. That’s how she rolls. And let’s not talk about Kamala—her qualification is that she sleeps with powerful men—some role model of a strong woman. Without Willy [sic] Brown she’d be working in an office cubicle… Feminism is dead on the Left.” 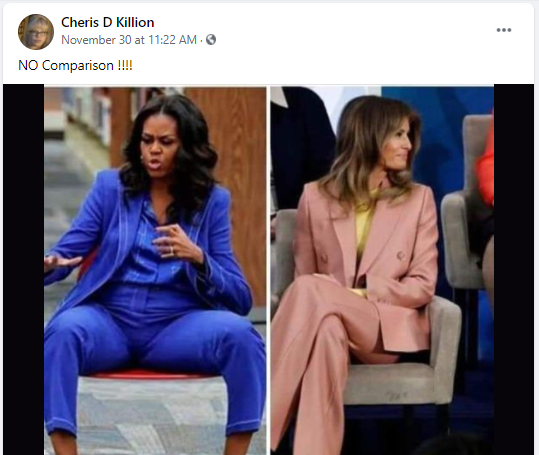 The page Travis shared from is even kookier than he is.
Screengrab from Facebook
There’s a lot to unpack here. First, the idea that Michelle Obama had to surrender her law license for criminal reasons is a very old bit of conservative bullshit that’s been fact checked by everyone from Snopes to Reuters. The original viral claim said that Obama was involved in insurance fraud, not real estate, because apparently Travis cannot even double-check his conspiracy theories. Obama voluntarily moved her status as a member of the Illinois Bar to inactive when she became First Lady, and there are no records of any disciplinary actions taken against her. The claim is simply not true and never was.

Did Obama get into Princeton? It’s possible, and Obama herself wondered that in her autobiography Becoming.

“It was impossible to be a black kid at a mostly white school and not feel the shadow of affirmative action,” says Obama in the book. “You could almost read the scrutiny in the gaze of certain students and even some professors, as if they wanted to say, 'I know why you’re here.' These moments could be demoralizing, even if I’m sure I was just imagining some of it," she wrote. "It planted a seed of doubt. Was I here merely as part of a social experiment?” 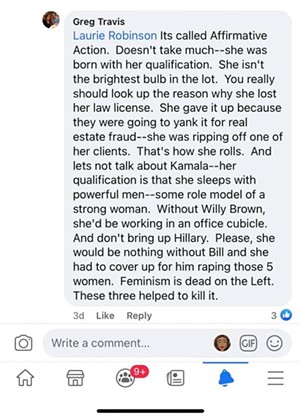 Travis' response to criticism.
Screengrab from Facebook
Regardless, Obama graduated in the top ten percent of Whitney Young Magnet High School before she went to Princeton and also served as school treasurer. She later graduated from Harvard Law School with a J.D. — the same degree Travis has from University of Texas School of Law. While affirmative action might have played a role in her getting to Princeton, it’s ridiculous to believe that it had anything to do with Obama actually earning her degree through hard work and good grades.

Travis’ remarks about Harris are gross, which is unsurprising as being a vile mouthpiece for fetid brain scat seems to be his only job skill. Yes, Harris did indeed date San Francisco Mayor Willie Brown in the mid-90s while her own career as a district attorney was taking office. It’s also true that Brown did appoint Harris to a couple of positions, including the Unemployment Insurance Appeals Board.

However, despite calls of cronyism there is no evidence that Harris somehow slept her way into the elected position of San Francisco County District Attorney. Brown supported her bid, yes, but then again, he supported other California politicians such as Gavin Newsom, Dianne Feinstein, and Nancy Pelosi at more or less the same level. As David Siders wrote for Politico Magazine, “It is difficult to find any successful politician in San Francisco who does not have history with Brown.” The idea that she hadn’t previously proven her capabilities for the role while in the Alameda County district attorney’s office in Oakland is just sexist blue skying from a far less accomplished man.

It’s also baffling considering that the basis of Travis’ entire rant is the idea that Trump is somehow a class above the women he is throwing shade at with all the grace and skill of a freshman trying to snap a girl’s bra. After all, Trump’s entire body of work involves some mediocre modeling, making Christmas ball-retractingly terrifying, and being married to the president. Without her husband, literally no one in America would have ever heard her name. I’m sure that it appeals to the conservative mindset that the acme of womanhood is someone who occasionally crosses her legs for pictures, otherwise keeps quiet, and bears male heirs, but that says far more about the fragility of people like Travis than it does accomplished women like Obama and Harris. He wouldn’t know feminism if it free bled on his clown shoes.
KEEP THE HOUSTON PRESS FREE... Since we started the Houston Press, it has been defined as the free, independent voice of Houston, and we'd like to keep it that way. With local media under siege, it's more important than ever for us to rally support behind funding our local journalism. You can help by participating in our "I Support" program, allowing us to keep offering readers access to our incisive coverage of local news, food and culture with no paywalls.
Make a one-time donation today for as little as $1.