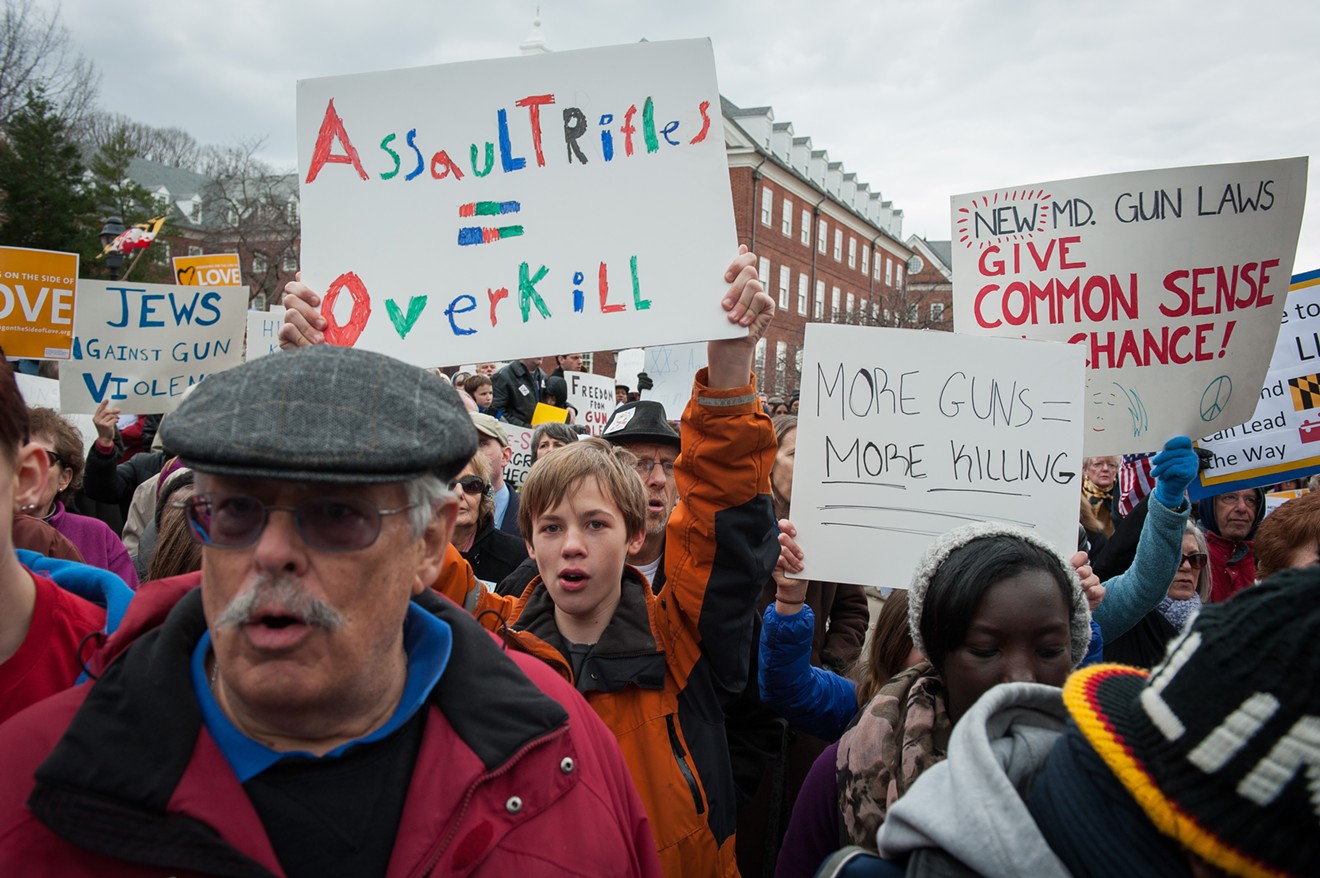 2013 Rally to Prevent Gun Violence in Annapolis, MD Photo by Maryland GovPics/Jay Baker via Flickr
This month New Zealand experienced a horrible white supremacy terror attack that killed 50 people. In the wake of that tragedy their government is skipping the “thoughts and prayers” portion of the Stages of Mass Shooting and going straight into banning “military-style semiautomatic weapons.” Their neighbor, Australia, passed similar measures after the Port Arthur Massacre In 1996, and the country has not had a mass shooting since.

As this story and its effects reach America I see a lot of angry commenters who are incensed that they can’t buy a weapon in a country they will likely never visit. At least one person I saw asked how this can happen with the Second Amendment, apparently unaware that the rest of the world gets along just fine without one.

The most remarkable new talking point I’ve noticed in multiple places is that gun control is a function of privilege. I’ve seen it called white supremacist, sexist, and ableist, which is once again proof the right will co-opt the language of the left for its purposes without having the first clue what words actually mean.

Let’s take these one at a time. The idea that gun control is a tool of control by whites against non-whites does have some basis in fact. The role of guns in white colonization is historically overstated, but American gun control has been used to keep minorities disarmed. Virginia prohibited slaves from owning guns in the 17th century, numerous laws were passed after the Civil War to keep freed blacks from arming themselves, and Governor Ronald Reagan outlawed open carry in California specifically to combat the pro-gun Black Panthers.

However, as Saul Cornell, a professor at Fordham University and researcher who focuses on the history of gun control told Al Jazeera, "Saying gun laws are always racist is just false.” The Black Panthers armed themselves to protest police violence, but even the most heated Black Lives Matter activist these days probably wouldn’t advocate that because we’ve seen what happens when police with the power of authority and often with militarized arsenals come up against armed black people.

The practical result is that police just end up shooting people because they feel threatened. EJ Bradford, Philando Castille, Tamir Rice, and Jerry Smith are good examples of real world consequences when police know or even think a black person is armed. As RJ Young, a black author with instructor status from the NRA put it, “I don't carry a handgun because through the process of learning to become proficient with one, I learned just how dangerous being near one has become for a person like me.”

The white supremacy lens on guns would argue the police should disarm in part or whole, not that minorities should openly carry. Removing guns from situations where racial bias may contribute to violence saves lives, not the other way around.

Sexism is another ridiculous charge. In keeping with the gun nut delusion of individual power, guns are seen as the equalizer between physically stronger men and physically weaker women. And sometimes it’s true. I have a female friend who is absolutely alive today because she was armed against a male intruder.

The facts, though, show this is an exception rather than a rule. The Violence Policy Center found in a look at FBI data that women were 100 times more likely to be killed by a man with a gun than use one in self-defense. The majority of those murders involved domestic or intimate partners. The most likely outcome in these situations is not a woman bravely fending off a violent man with a pistol and pithy line, but a woman having her own gun used on her.

Let’s also not forget what happened to Jacqueline Dixon when she shot her abusive estranged husband who was attacking her. She was arrested even though Alabama is a Stand Your Ground state. Charges were eventually dropped, after intense media coverage, but she was far from the only woman that has happened to. When you’re a minority and you try to equalize a system with guns, the system tends to retaliate by upholding the inequality.

As for the idea that disabled people are empowered by guns... no. The Ruderman Family Foundation found that half of all people shot by police have a disability. Armed cops often lack the training to deal with the disabled, which leads to fatal shootings. Just as with armed black suspects, a disabled person with a weapon is in more danger from police, not less. There’s also the fact that the disabled experience abuse at three times the rate of the abled population and we’ve already covered how guns in those situations usually contribute to the victim’s death.

The American gun culture identity is based on possible heroism and self-reliance, so the argument that gun control only further marginalizes people from protecting themselves is possibly not entirely in bad faith.  However, any sincere look at how guns are actually used and who uses them shows that they are far more likely to make beneficiaries of privilege into killers than to equalize their victims in defense. White supremacy and anti-feminist terrorism are on the rise in precisely the demographics that already own the most guns in this country: white men. They’re the ones who are likely to be touched in a negative way by gun control, not minorities.

No one is going to shoot their way to a better world, least of all marginalized people for whom guns are generally in the hands of the oppressors instead of their own no matter how lax the laws are. Gun fanatics trying to twist the language of equality to impede progress on ending gun violence have zero interest in fighting bigotry. They just want a better reason to be armed, and this one is a lie we should deny them.
KEEP THE HOUSTON PRESS FREE... Since we started the Houston Press, it has been defined as the free, independent voice of Houston, and we'd like to keep it that way. With local media under siege, it's more important than ever for us to rally support behind funding our local journalism. You can help by participating in our "I Support" program, allowing us to keep offering readers access to our incisive coverage of local news, food and culture with no paywalls.
Make a one-time donation today for as little as $1.