Historic Eppes House Back On Market, Ready to Enter Its Second Century

The Eppes House features a concrete stucco exterior and hipped concrete roof. Photo by Tad Krampitz
Those in search of a new estate home will instantly become part of Houston's history with the Italian Renaissance Villa at 5322 Institute Lane. The Eppes House is named for its original owner, concrete pioneer Ned Alwin Eppes, and the home is one of our city's first residences made from framed concrete. Other notable families have lived here over the years, and for decades it was owned by the Abercrombie family.

Built in 1926 by Albert Edward Scott and designed by architects John McLelland and Brickey, Wiggins and Brickey, the home has been beautifully preserved and is ready to enter its next century with recent upgrades to infrastructure — HVAC, water heaters, sewer pipes, electrical and duct work — as well as restoration of the original windows.

McLelland, an English-born architect, also received commissions for his work on many area schools, Eastwood Episcopal and Harrisburg Episcopal Churches, the Polk County Courthouse in Livingston, and the now demolished Golfcrest Country Club. The Dallas firm Brickey, Wiggins and Brickey designed another home on Institute Lane and is known for its work on the famed Warwick Hotel. 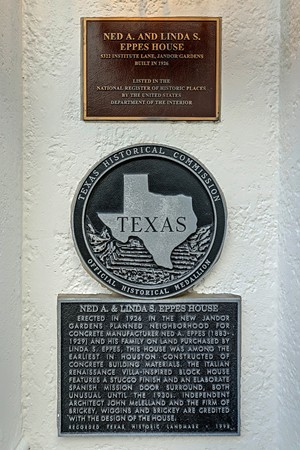 Looking good at 93.
Photo by Tad Krampitz
Properties in Jandor Gardens don't come on the market often, and Marty Warren with Martha Turner Sotheby's International Realty just listed this property at 5322 Institute. It is registered on the National Registry of Historic Places and has been designated as an Official Houston Landmark.

Warren tells us that preservations and improvements along the way have been in keeping with the home's character. "The components are original; they think most of the floors are, the built-ins, the arched doors, those are mahogany."

A backyard oasis was realized when the Teeters family purchased the home in the 1980s, adding the porte-cochere, rear loggia, swimming pool and pool house. Today the back yard is a stunner with meticulous landscaping, lighting that transforms the space into a paradise after dusk, a custom fountain, privacy fence, and storage building for equipment and a generator. The loggia has been expanded to include a fireplace, summer kitchen with granite counters, and a period-appropriate bead board ceiling.

"It’s also got the corbels under the eaves around the edge of the house, which  makes it stand out," says Warren. "There are so many windows around the house; there are actually views of the pool from almost all of the rooms." 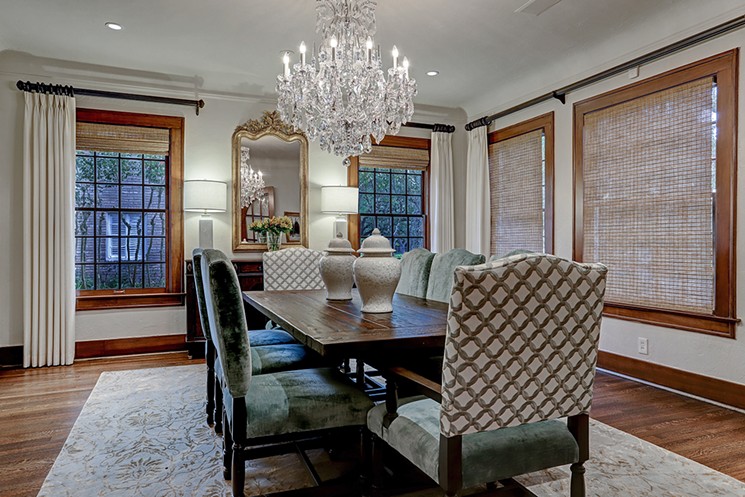 It is believed that the hardwood flooring is original to the home.
Photo by Tad Krampitz
The interiors have been painstakingly and lovingly restored with original mahogany archways and cove ceilings. The sunroom contains original glazed brick floors, and the living room features hardwood flooring and a cast stone fireplace. The centerpiece of the formal dining room is a Swarovski crystal chandelier, while mahogany French doors open out to the gardens.

Downstairs is a custom basement that was literally carved out of the original foundation and has been supported by massive concrete columns — a nice nod to its original owner, the concrete innovator. The basement features a walk-in wine cooler and storage for 180 bottles, a fireplace with reclaimed brick and part of the original foundation running through it, and dry/wet bars with granite countertops.

Warren describes the basement as one of the most unique rooms he's ever seen. "They basically carved that space out from the original foundation. At the entry, you can see where they chipped off around the edges. And they actually raised the ceiling," adds Warren.

The master bedroom also features hardwood floors and an abundance of windows, and leads out to a recently added balcony above the expanded loggia, with views of the pool and back yard. Warren says the homeowners spared no expense when looking for a company to plaster the expanded loggia; it was important to them that it matched the original exterior.

A separate guest suite, or a fifth bedroom, has its own entrance and full bathroom. 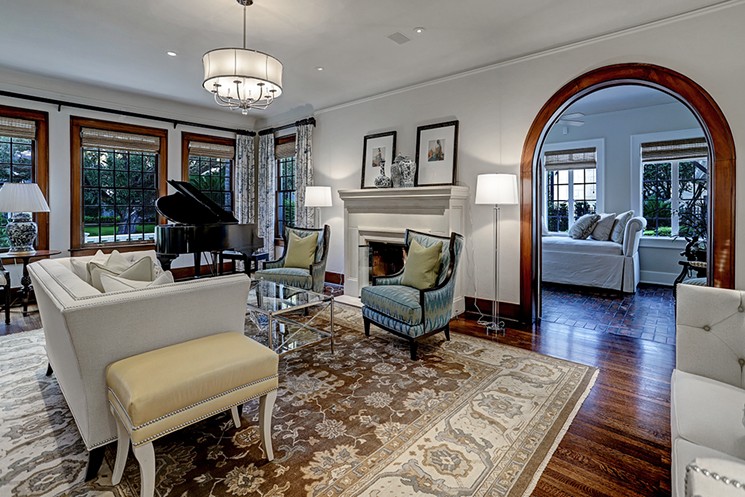 Original mahogany arches have been lovingly presrved.
Photo by Tad Krampitz
In the formal living room, all of the original windows have been recently reglazed and restored to open and close with custom remote controls. The windows look out onto the front yard and cul-de-sac.

Not shown, but the kitchen is light and bright with white floor-to-ceiling cabinetry, a granite-topped island with a soothing blue facade, seating for informal dining, a Thermador double convection oven with large vent hood, and a built-in Sub-Zero refrigerator. Just off the kitchen is an intimate breakfast room that still contains the original built-in arched china cabinets.

To view the City of Houston's landmark designation report for the Eppes House, visit houstontx.gov/planning/HistoricPres/landmarks.
KEEP THE HOUSTON PRESS FREE... Since we started the Houston Press, it has been defined as the free, independent voice of Houston, and we'd like to keep it that way. With local media under siege, it's more important than ever for us to rally support behind funding our local journalism. You can help by participating in our "I Support" program, allowing us to keep offering readers access to our incisive coverage of local news, food and culture with no paywalls.
Make a one-time donation today for as little as $1.