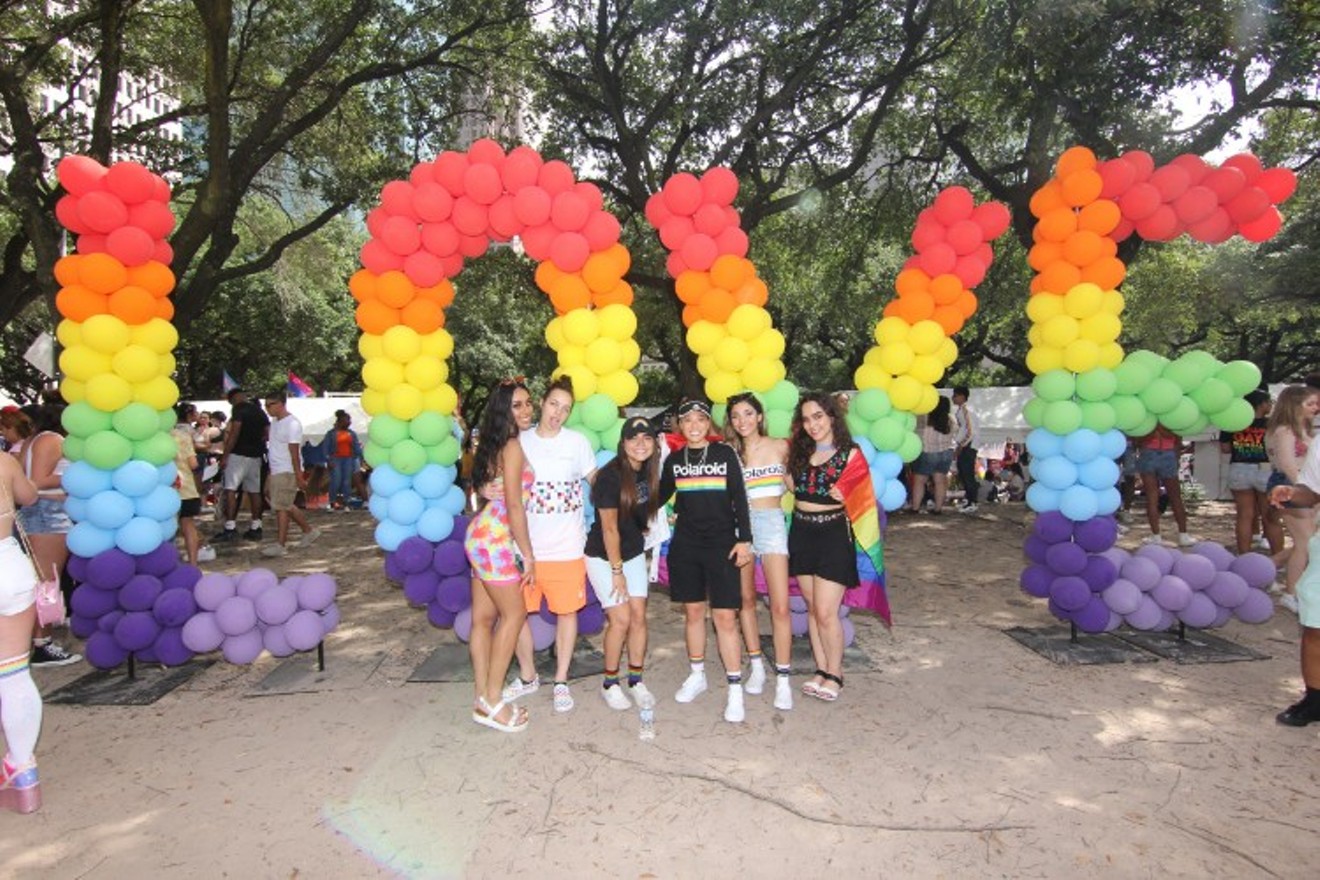 Houston's Pride Parade is a massive celebration of love. Photo by Doogie Roux
Twice in the last decade, we at the Houston Press have compiled our list of the 100 things every Houstonian must do. The first list was nearly 10 years ago and limited to a very small radius around the city (30 miles). In 2017, we expanded it to include distances slightly farther away — up to 100 miles — given at how much is so close to us. How can we exclude the Gulf of Mexico?

Just in time for this list, it's Pride Month! And, in Houston we do it big with celebrations throughout the month culminating with the a full-day celebration (this year June 25) in front of City Hall. Despite grumblings when the parade moved from the Montrose to downtown, it is a massive success every year with literally hundreds of thousands of people attending.

As much as we like to party, we equally enjoy eating. This year, Houstonians have a new place to do just that at POST Houston. After the former Barbara Jordan Post Office in downtown was shuttered, it hosted the arts and concert festival Day for Night for a few years before developers swooped in to turn it into one of the coolest food halls you'll ever see complete with numerous vendors, concert venues and one of the best views of the skyline from the rooftop gardens.

Cross over on the Bolivar Ferry. [CLASSIC]

As kids, those of us who grew up here probably have fond memories of riding the Boliver Ferry and watching the dolphins occasionally leap alongside. We may or may not have pissed off commuters by tossing bread to throngs of seagulls. Regardless, riding the ferry from the island to the mainland is far more entertaining than going over the causeway (albeit a much longer drive to get to it from Houston) and, more importantly, it gets you to the Bolivar Peninsula, one of the more interesting parts of the Texas Gulf coastline. 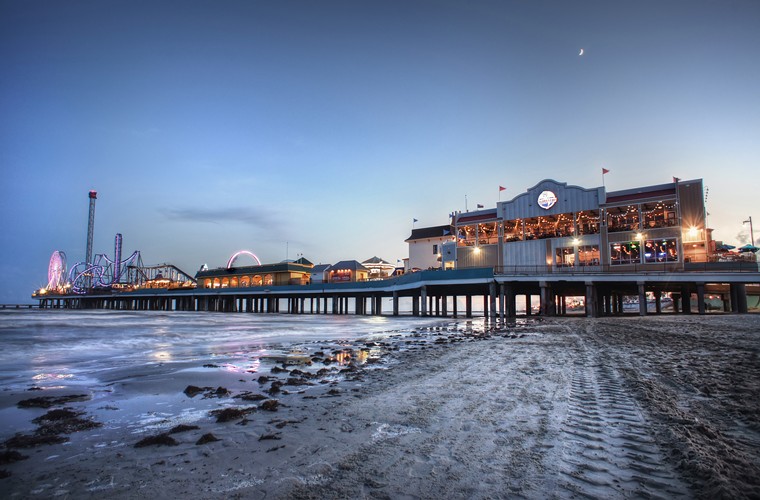 Wild rides and fried foods over the Gulf of Mexico.
Photo by Katie Haugland Bowen via CC
Take a ride at the Galveston Pleasure Pier. [CLASSIC]

When billionaire restauranteur and Rockets owner Tilman Fertitta promised to convert the dilapidated old Flagship Hotel, which sat on a long pier over the Gulf, into Galveston's version of Coney Island, no one should have questioned it. And, without a doubt, the Galveston Pleasure Pier is one of the biggest attractions on the island with rides that fling you out over the water, carnival games and boatloads of fried seafood.

Climb down into the Cistern. [CLASSIC]

No one could have possibly imagined how Buffalo Bayou Park would transform the downtown and surrounding area. But, it did. Additionally, no one thought that part of that transformation would include the discovery of an underground cistern all but forgotten. But, that happened too and now it is a magical and fascinating spaced used for art and sound projects. Truly one of the most odd and spectacular finds in a city seemingly full of them.

Get your groceries at the Houston Farmer’s Market.

There were many native Houstonians skeptical of the move to close the old farmer's market on Airline, which had been operating for decades, and re-imagine it as something akin to Seattle's popular Pike's Place Fish Market. But, those of us who didn't believe it could deliver on that promise while still retaining the uniqueness it held for all those years were wrong. Yes, the Houston Farmer's Market is a modern reimagining of the old open air place we grew up with, but it has many of the same vendors and feels almost like a bazaar from a foreign country. It's more than a place for fruit, vegetables and herbs you've never heard of before, it is a bona fide tourist attraction. 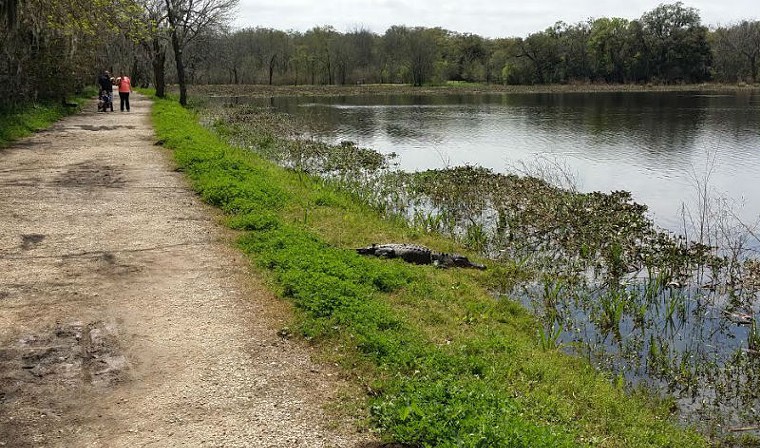 Someone once explained to us that the American alligator is not aggressive like their far more dangerous cousins, the crocodile. We still don't believe them, but we've managed to make our peace with the plentiful gators found at Brazos Bend State Park. Look, we don't go up and try to pet them, but we also don't generally run in fear. Progress is progress. If you are as fascinated by these prehistoric looking creatures as we are, take a drive south down Highway 288 and poke around the nearly 5,000 acres of incredible nature along the banks of the Brazos River. Walking paths are wide and well maintained. And you're nearly guaranteed to see one of our leathery friends in the water or sunning themselves on the bank. You'll be fine.

Marvel at some of the most amazing bird watching in the world. [CLASSIC]

Speaking of nature, the Texas coastline is the destination for thousands of birdwatchers every year. With plentiful coastal birds and millions of other migratory species who visit in the winter, places like the Smith Oaks Rookery on High Island are packed at different times of the year with people watching and photographing roseate spoonbills, brown pelicans and more. But don't think for a second that you need to even leave town. Houston is home to tons of our winged friends including ducks, geese, hawks and hundreds of other species both year round and as part of winter migration patterns. In fact, bodies of water around Houston are prime spots to see bald eagles all year.

Watch some college baseball during the annual Silver Glove series between University of Houston and Rice. [CLASSIC]

Neither Rice nor UH have been particular baseball powerhouses lately, but both have long storied histories of their successes on the diamond. They also have a local rivalry that goes back many years. And for spectators, Reckling Park (Rice) and Don Sanders Field (UH) are some of the best ballparks you'll ever visit. They are intimate and tickets are pretty reasonable even for good seats. If you love the game of baseball (nevermind the intoxicating ping of the aluminum bats allowed outside the pros), these are fun places to see a gam.

Eat a turkey leg at, where else, Turkey Leg Hut.

Talk about a sensation. When the now famous Turkey Leg Hut opened with modest accommodations on Almeda Road, roughly equidistant to downtown, Midtown, Third Ward and the Museum District, it didn't feel like that big of a deal. Turkey legs felt like something for the Renaissance Festival. But, the restaurant has turned into more than just a place to grab some unique and delicious grub. It is a hub of the African American community in Houston and a favorite destination for celebrities, politicians and, quite often, a boatload of Slingshots, particularly on weekends when lines can wrap around the block.
KEEP THE HOUSTON PRESS FREE... Since we started the Houston Press, it has been defined as the free, independent voice of Houston, and we'd like to keep it that way. With local media under siege, it's more important than ever for us to rally support behind funding our local journalism. You can help by participating in our "I Support" program, allowing us to keep offering readers access to our incisive coverage of local news, food and culture with no paywalls.
Make a one-time donation today for as little as $1.