One Dead, Two Injured As Another Plant Fire Hits the Houston Area 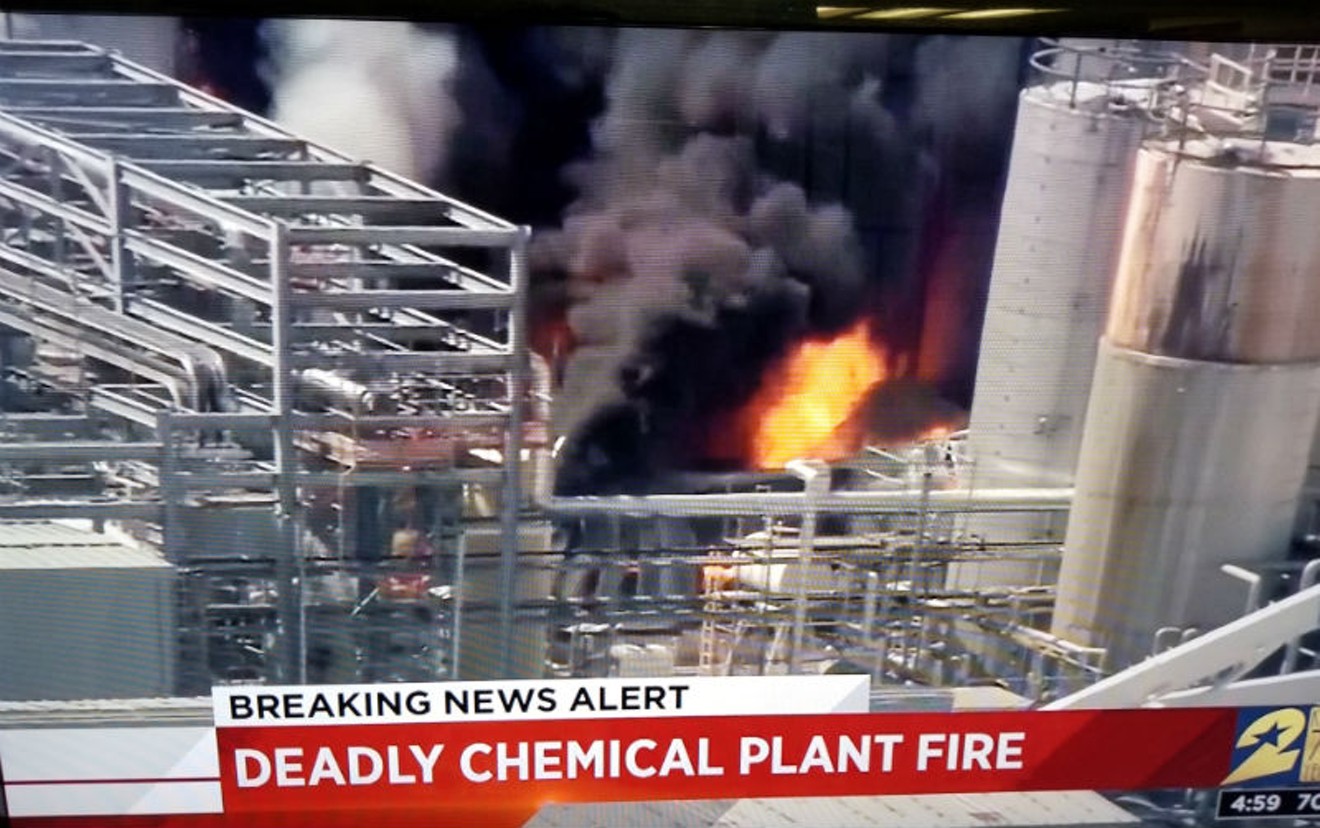 Another plant fire, this one deadly. Screenshot from Channel 2 News
On Tuesday afternoon, fires were still burning at the KMCO chemical plant in East Harris County with reports that one person died in the blaze and two others were critically injured and were taken by ambulance to Memorial Hermann. By 5 p.m. the fires were out and the one-mile shelter-in-place order was lifted.

In a 5 p.m. news conference company President and CEO John C. Foley expressed "great sadness" at the loss of one of the KMCO employees in the fire and explosion that occurred just before 11 a.m. Tuesday. He apologized for both the inconvenience and the worry the Crosby plant fire caused. All three people hurt in the fire were company employees, but no information was released about their names or specific injuries.

Pilar Davis from KMCO Operations, who was described by Foley as the former plant manager, said "Today the fire initially ignited with isobutylene. It was then further fueled by ethanol and ethyl acrylate. These are chemicals and solvents used to make fuel additives at our facility."

She said the company was working with the EPA to monitor air quality "And they have not reported any issues at this time."

The absence of a strong wind was one of the factors that enabled emergency personnel to contain the fire more quickly. The plume of dark smoke went straight up into the air instead of spreading out to a larger area. The Environmental Protection Agency, Harris County Sheriff's Department and other emergency personnel were on hand as air monitors checked the atmosphere.

Although Davis said that they had handed over all needed information to the authorities about all the chemicals on site and the number of employees were working at the time, for some reason she didn't bring those notes or records with her to the press conference and repeatedly said without that information right in front of her, she couldn't answer those questions. Instead she repeatedly said: "We have safety and compliance as a priority at our facility."

Neither she nor Foley directly addressed questions about KMCO's past operations. It has been sued, investigated and fined more than once in the last ten years including for violations of the Clean Air Act by the federal state and county agencies.

Occurring only three weeks since the ITC fire in Deer Park, the KMCO facility caused local authorities including Houston ISD to spring into action, in a routine that is becoming all too familiar. Neighbors were told to shelter in place and Houston ISD called off outdoor activities at more than 50 of its campuses in the east and north areas of the district. Other local districts including Crosby, Sheldon, Channelview and Sheldon, ordered a shelter in place.

The affected HISD campuses are:

This morning at approximately 11:00 am, a deadly explosion occurred at the KMCO Plant in Crosby. Sadly, one person working at the plant was killed and two other workers were critically injured. Our thoughts are with the victims and their families. A shelter in place for Crosby and nearby school districts was issued out of an abundance of caution and has been lifted.

Finally, I want to remind residents that Harris County is taking action to do what we can to address these challenges in the long term. Just last week, in response to the ITC incident, Commissioners Court passed a motion to conduct an overall risk assessment of refinery and chemical plant operators and contractors, and a separate motion to expand our air monitoring capacity so we can communicate more information about air quality to Harris County residents. The KCMO incident further underscores the urgency of improving our response and data gathering capacity.
In the meantime, visit www.readyharris.org/CrosbyFire for air quality data as it becomes available.