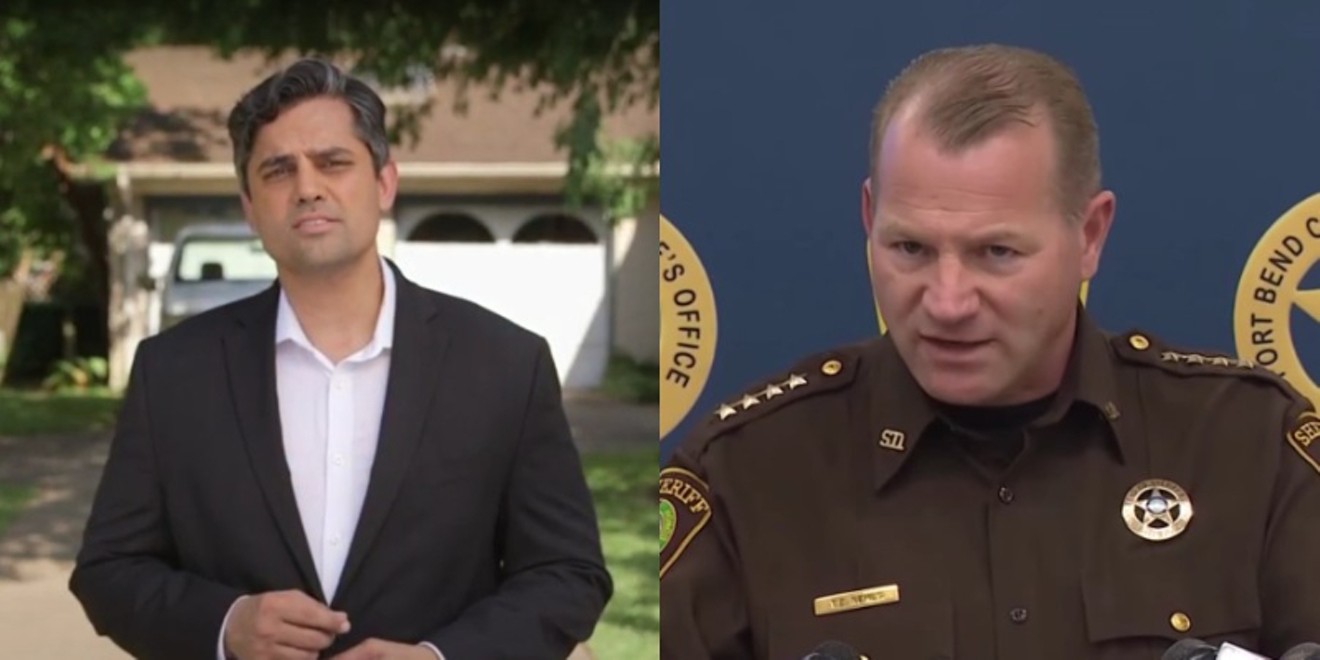 Democrat Sri Preston Kulkarni (left) is running against Republican Troy Nehls (right) in the toss-up race for Congress in Fort Bend County's TX-22. Left: Screenshot from Sri for Congress 2020 via YouTube; Right: Screenshot from KHOU broadcast via YouTube
In Texas's 22nd Congressional District, TV viewers have been routinely bombarded with ominous attack ads from both sides of the aisle for weeks now. One tells the tale of a reckless police officer who was fired for destroying evidence and turned a blind eye to racial profiling, while another commercial accuses that cop's opponent of being a far left-wing radical drug user who goes to crazy desert parties and doesn't share district voters' suburban values.

The two men portrayed in these salacious TV spots are Republican Fort Bend County Sheriff Troy Nehls and Democrat Sri Preston Kulkarni. In the latest battleground to turn red seats blue in Texas, Democrats are hoping that their candidate, a former Obama-era foreign service officer, can pull out a victory against Nehls in the race for retiring Republican Rep. Pete Olson's seat in the U.S. House of Representatives.

TX-22 comprises most of Fort Bend County, as well as the chunk of Brazoria County where Pearland sits and a tiny bit of Harris County around Friendswood. The 22nd district as a whole is extremely diverse in its makeup, thanks mostly to Fort Bend County. Twenty-seven percent of district residents are Hispanic, 18 percent are Asian and 14 percent are Black, while white residents make up 38 percent of the district's population.

Nehls is betting that his longtime ties to the area — he’s been elected Fort Bend County sheriff twice now, has served in local law enforcement for decades and raised his family in the district — will help give him the edge over his opponent, who spent most of his adult life working around the world as a diplomat.

“My opponent has not served a single day in any public service role in our communities. I have served our communities 28 years in law enforcement and our country 21 years in the U.S. Army Reserve,” Nehls wrote to the Houston Press in a prepared statement.

While Kulkarni doesn’t come close to Nehls’ years of working in local government, he’s out to prove that his multi-racial upbringing and experience dealing with tricky global conflicts make him better suited to serving the district’s diverse constituency than his rival.

Kulkarni’s father was an Indian immigrant, and his mom can trace her roots back to Texas founding father Sam Houston. He trotted the globe for 14 years as a foreign service officer, with stints in Israel, Taiwan, Russia, Iraq and Jamaica. Kulkarni is fluent in English, Spanish, Mandarin Chinese, Hebrew, Hindi and Russian, and his campaign has been reaching out to voters in 27 different languages. If elected, Kulkarni would be both the first Asian American and the first Hindu representing Texas in Congress.

“This is one of the most diverse districts in the country, and it’s never had leadership that really represented that,” said Jack Doyle, communications director for the Kulkarni campaign.

This isn’t Kulkarni’s first race to represent the 22nd district in D.C., as he ran and lost against Olson in 2018. The defeat was a narrow one though, and Kulkarni gave Olson a much tougher challenge than his previous opponent did.

Back in 2016, Olson handed his Democratic challenger Mark Gibson a 16-point walloping, but only managed to eke out a 5 point win against Kulkarni in 2018. That tight race coupled with President Trump’s disastrous handling of the COVID-19 crisis has Kulkarni and Democrats across the country bullish that this could be the year the historically right-leaning district turns blue.

One signal of how close the race is (both the nonpartisan Cook Political Report and University of Virginia political forecaster Larry Sabato called it a true toss-up) is those nasty attack ads, which were bankrolled by outside groups representing each candidate.

The Republican-aligned Congressional Leadership Fund is responsible for running the ad that paints Kulkarni as “too reckless and too liberal to deserve a seat in Congress” based on a drug arrest for possession of less than a gram of cocaine when he was 18 (which was dismissed after two years of probation) and the fact that Kulkarni once attended the rowdy annual Burning Man festival in the Nevada desert.

Kulkarni’s campaign laughed off both incidents, and referenced the fact that even Grover Norquist, the famously hard right-wing tax reduction advocate, has raved about his own trip to Burning Man in the past.

“I think it’s pretty clear that if they want to talk about something that happened to Sri when he was a teenager, or him going to a festival that Grover Norquist attended, that they don’t have a lot,” Doyle said.

Meanwhile, the Democratic Congressional Campaign Committee has hit Nehls hard on multiple concerning incidents in his law enforcement past. Their ad calls out the fact that Nehls was fired from the Richmond Police Department in 1998 for destroying evidence and disregarding orders from supervisors, citing a 2017 report from Houston Public Media. The ad also references accusations that some members of the Fort Bend County Sheriff’s Office racially profiled Latinos and a suicide by an inmate at Fort Bend County Jail under Nehls’s tenure, and blames Nehls for both incidents.

“That ad and many others like it are full of lies, distortions, and baseless accusations,” Nehls wrote in a statement, without mentioning any specific claims made in the ad in question.

When asked what his top priority is, Nehls wrote that “It’s two issues intertwined: COVID-19 and the economy.”

He cited the “tremendous damage to our economy” caused by the coronavirus, and called Washington’s inability to deliver another relief package “unacceptable and something I will work to address immediately.” In terms of responding to the pandemic, Nehls only mentioned the need “to develop a safe vaccine a quickly as possible and continue to increase testing access until it’s completely universal.”

Kulkarni has roundly criticized Nehls for a Facebook post the sheriff made this past April, where he called Harris County Judge Lina Hidalgo’s attempted mask mandate that would have come with a $1,000 fine for noncompliance “unAmerican” and “an unprecedented overreach which looks more like a communist dictatorship than a free Republic,” although he did write in the same post that he encourages people to wear masks “if they have one” and “to be conscious of others when we’re out.”

“Those are rules that are meant to stop the spread of coronavirus and save Texans’ lives. He called those mandates communist and unAmerican, and basically [was] just playing political games instead of listening to public health experts,” Doyle said.

“When you talk [to voters] about the coronavirus…. it’s impossible to talk to them about it without bringing up the fact that right now, Texas Republicans are suing to kill the Affordable Care Act, which would take health care away from millions,” Doyle continued, calling healthcare and COVID-19 the campaign’s main focus areas in the home stretch.

Nehls hasn’t weighed in on the Obamacare debate, but his campaign website said he wants to “increase healthcare offerings while protecting those with preexisting conditions” and that he believes in “protecting private insurance.” Kulkarni’s team believes Nehls’s silence on the Affordable Care Act is akin to a rubber stamp on the ongoing Republican efforts to overturn the bill.

In his last race for Congress, Kulkarni advocated for Medicare For All, but his stance on government-run insurance has changed. This time around, he’s tacked to a more center-left strategy, running on a promise that he’d work to beef-up Obamacare with a public option for health insurance, and now opposes eliminating private insurance.

“In 2018, he was open to a lot of ideas. And I think now, in talking to more voters and talking to experts, he feels a little stronger that the public option is just such a slam dunk, and such a great way to just simply get real solutions to people,” Doyle said.

“He wants to just make sure he can both provide more affordable healthcare, but he also wants to make sure that no one’s going to lose their insurance if they’re happy with it, because that doesn’t solve anyone’s problem,” Doyle continued.

As of October 14 when both campaigns’ most recent finance reports were filed, Kulkarni had a solid lead against Nehls, with $712,232 in the bank compared to his opponent’s $164,611.

Kulkarni’s team hopes that cash advantage coupled with their opponent’s mixed-messaging on the coronavirus and Trump’s bad reputation will help them come up victorious. Meanwhile, it seems like Nehls is hoping that by staying out of the limelight and backing away from his previously strong embrace of Trump will help him win over county residents who might have historically voted red but have soured on the president.

Nehls has refused multiple requests from Kulkarni to publicly debate the issues, and he’s turned down invitations to speak with both Community Impact Newspaper and the Houston Chronicle for their election guides.

An archived version of the sheriff's campaign website from back in July when Nehls was facing a primary challenge from far-right whack job and prolific GOP fundraiser Kathaleen Wall had a huge section titled “STANDING WITH PRESIDENT TRUMP” and mentioned the president by name five different times.

Check out his website now, and there’s no mention of Trump to be found. When a conservative sheriff in Texas feels like he has to distance himself from an incumbent GOP president in a race for a seat in Congress held by a Republican, it really drives home how much things can change in four short years.
KEEP THE HOUSTON PRESS FREE... Since we started the Houston Press, it has been defined as the free, independent voice of Houston, and we'd like to keep it that way. With local media under siege, it's more important than ever for us to rally support behind funding our local journalism. You can help by participating in our "I Support" program, allowing us to keep offering readers access to our incisive coverage of local news, food and culture with no paywalls.
Make a one-time donation today for as little as $1.