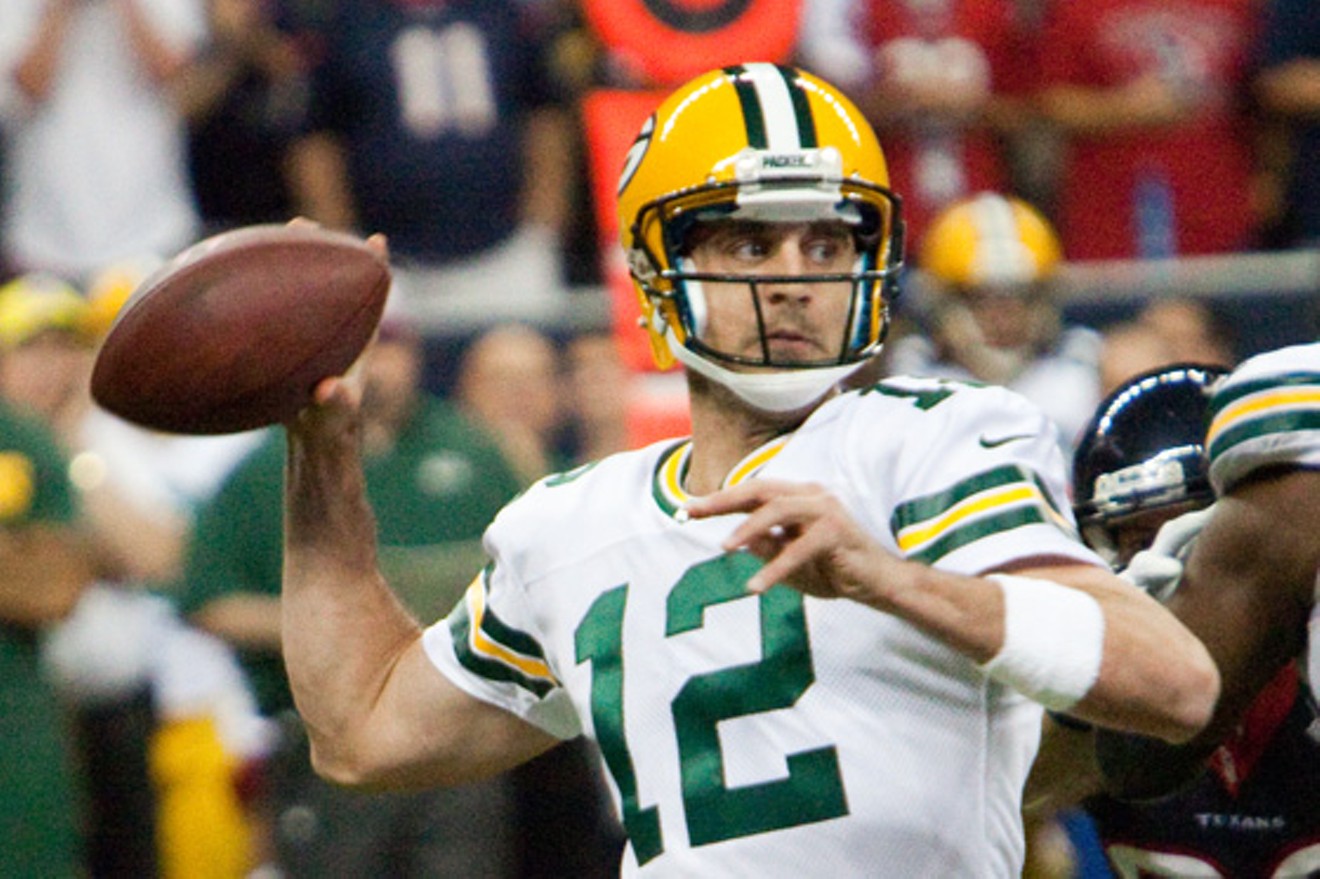 Aaron Rodgers has a LeBron James style decision coming down today. Photo by Daniel Kramer
It's a fun time on the NFL calendar, with the league year set to begin next Wednesday, with free agency on the horizon, and the NFL combine now in the books. Soon enough, the NFL Draft and the bounty of picks the Houston Texans will hopefully deploy with be the big talking point. In the midst of all of this, though, we are on the cusp of a possible league-altering decision likely coming Tuesday from the two-time reigning league MVP, Green Bay Packers quarterback Aaron Rodgers.

Reportedly, today Rodgers will choose where he will be playing in 2022. He is under contract to the Green Bay Packers, and according to reports, the Packers have offered him a multi-year contract extension that would reshape the QB contract market. However, that may not be enough, as Rodgers is mulling over playing next season for a new employer. Courtesy of Mike Florio with Pro Football Talk:


Per a source with knowledge of the situation, Rodgers has specific deals lined up with other teams — and those teams have trade compensation lined up with the Packers. The potential moves have been arranged, essentially, with the permission of the Packers.

The destinations are believed to be exclusively in the AFC. To little surprise, the Broncos are one of them. Other viable possibilities are, we’re told, the Titans and Steelers.

To be clear, if Rodgers chooses Denver or Tennessee or Pittsburgh, the deals will fall into place quickly, both as to the trade terms and as to the contract Rodgers would sign.

Obviously, a player of Rodgers' stature moving on, despite the repeated playoff failures since winning his first and only Super Bowl in 2010, would result in dramatic ripple effects across the league, effects that would be felt in every market, even Houston. So let's start there with a few thoughts on where Rodgers goes from here:

How does this all affect the Houston Texans?
It's wild to think that, at 4-13 last season and light years removed from the playoff picture and any Rodgers conversations, the Texans would feel any effects of Rodgers' choice, but they will. For a couple reasons, Texans fans should be rooting for Rodgers to stay in Green Bay. First, if he were to choose the Tennessee Titans, now the Texans would have to deal with playing Aaron Rodgers twice each season. That is not fun. If Rodgers chooses the Broncos or Steelers, then those are both potential suitors for Deshaun Watson, one of whom would be eliminated from whatever budding war Nick Caserio can get going, if and when Watson is cleared to be traded.

Which place makes the most sense for Rodgers to choose?
The good news for Texans fans is that notably do many around the league think Rodgers will stay in Green Bay, but that is also the most sensible solution for Rodgers. If he is interested at all in his legacy, I think history will look back more kindly, in HIS case, on a quarterback who played his whole career in one place and winning Super Bowls there with completely different teammates, than needing to leave for another franchise to accomplish that goal. Green Bay is a blue blood franchise with incredible tradition, and his relationship with the front office seem to be repaired after a very contentious summer in 2021. For what it's worth, the people voting in this Twitter poll seem to agree:


#Penderpoll … simple one… which destination should AARON RODGERS choose?

OK, but if Rodgers is hellbent on LEAVING Green Bay, what makes the most sense?
That would all depend on what's most important to him. All three have rosters that are immediate contenders if they add Rodgers, so I would say the talent level surrounding him is a wash among all three teams. Hell, Tennessee was the 1-seed in the AFC with Ryan Tannehill has their quarterback in 2021. I would say that if he is looking for similar football tradition and passion in a fan base as he has in Green Bay, then Pittsburgh is the choice.

If he is looking for familiar faces, Denver's new head coach, Nathaniel Hackett, was Rodgers' offensive coordinator in Green Bay the last couple seasons. If he is looking for the clearest path to a division title, Tennessee would be a runaway favorite in the AFC South with Rodgers, while Denver and Pittsburgh might not be favored to win their own divisions with him. Connecting the dots, Rodgers reportedly is shopping for real estate near Nashville, although that's not always the harbinger we think it is. This just in — athletes have a lot of money, and thus, own real estate in a LOT of places where they don't play sports.

Will Green Bay burn to the ground if Rodgers leaves?
This is the really interesting question — how does Green Bay react to Rodgers' leaving, if he does? The closest thing I can think of to Rodgers' concocted melodrama this week is when LeBron James had an ESPN special created to announce that he would be leaving Cleveland for the Miami Heat in 2010:
The reaction from Cavaliers fans was pretty unhinged and emotional:
I'm guessing all of these Cleveland fans were able to forgive and forget when he returned to Cleveland and won a title. I need a "Where are they now?" of this YouTube video. Holy hell! Now, back to Rodgers. I host a nationally syndicated radio show on Sunday afternoons on CBS Sports Radio, and I have been amazed at just how ready some Packer fans that call my show are to move on from Rodgers. Clearly, this is a fan base that hasn't had to experience any downtick in QB play since before Brett Favre arrived in 1992. They're quite spoiled! So what I am saying is that I doubt we get the sobbing, wailing, unhinged Cavalier fan reaction that LeBron got in 2010.

Look, I get that Rodgers can be a handful, no doubt. However, you know what else is a handful? Going 4-13 every year. Ask Texan fans.