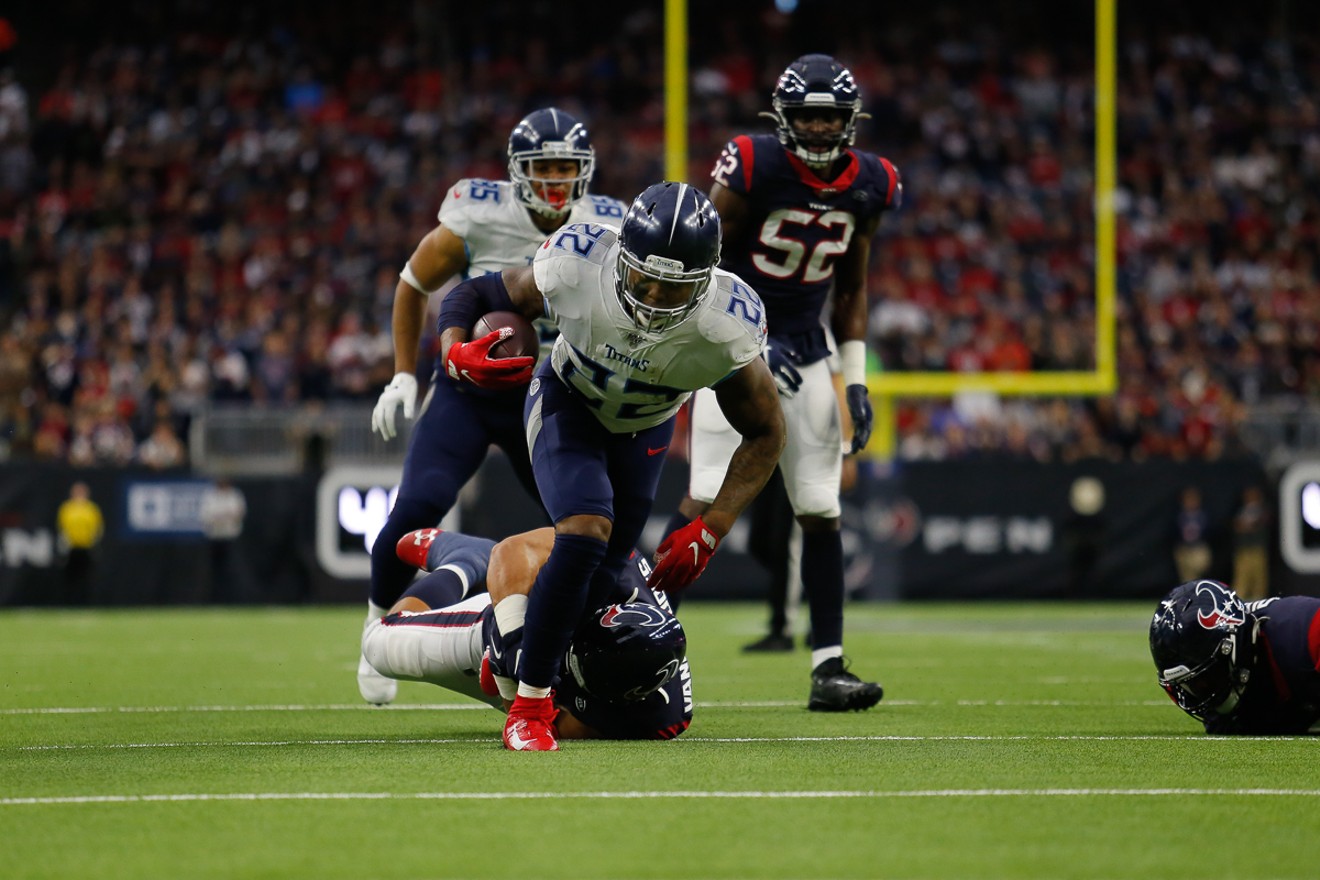 Derrick Henry (22) will be one of the key figures in this weekend's conference title round. Photo by Eric Sauseda
We will get to the AFC and NFC title games in just a moment, but first, as long as gambling is the topic in this post, give me a brief moment to frame the impact of Major League Baseball's punishment of the Houston Astros for their electronic sign stealing back in 2017 and part of 2018. Now, to be clear, there will be a profound impact eventually, but probably not for a few seasons. That's when the lack of first and second round draft picks in 2020 and 2021 will begin to be felt.

For the 2020 season, it's full steam ahead. There have been no punishments dished out to any of the players, this is a veteran team that can be managed by any sound, sane baseball guy, and honestly, with the team lacking big time prospects in the minor leagues and up against the luxury tax threshold, there probably aren't any big Verlander/Cole/Greinke deals to be had this season, hence, Jeff Luhnow's absence is less impactful.

In short, the Astros are still one of the best teams in baseball in 2020, and this is reflected on the betting website Bovada, where the Astros' odds for winning the World Series in 2020 remain unchanged compared to Sunday night, before the beheadings started. They remain at +600 (6/1 odds), tied with the Dodgers for second on the board, and behind only the New York Yankees, who are the heavy favorites at +325.

Here is the board:


So there you go. You have a team here in Houston that is (hopefully) angry and feeling like they have something to prove to the haters. As for the impact of the actual punishments, see me in, like, 2023 so we can all go to therapy together.

Now onto the two Texan-less conference title games this weekend:

CHIEFS -7 over Titans
This is a game that is going to be a tough watch for Texans fans. On the one hand, you have the team that dissected you like a dead frog in biology class for the final three quarters last Sunday. (I get angry just typing about that game, thinking of Bill O'Brien). On the other hand, you have the team that was pilfered from your city by Nashville, but on a more practical level, you have a team IN YOUR DIVISION making the conference title game. In fact, now all three Texan foes in the AFC South (Colts, Jaguars, Titans) have been to a conference title game since O'Brien arrived here in 2014. OK, now that that's out of our system, back to the game itself.

If there is a team that stylistically is built to combat the Chiefs in a hostile road environment, it's Tennessee, who could theoretically ride Derrick Henry for another 30 carries on Sunday, and keep Patrick Mahomes on the sideline as a glorified spectator. Henry's carried the ball 96 times over the last three weeks — NINETY SIX TIMES! — so I question how much more pounding he can take. Ryan Tannehill will need to make some plays, as the Chiefs are going to cash in on all the trips to the red zone that the Ravens couldn't cash in on last week. The Titans have some talent on defense, but this Chiefs offense is doing everything right, and at just the right time. The Titans will be thrown off the Henry script and forced to lean on Ryan Tannehill a little too much.
CHIEFS 35, TITANS 24

Packers +7 over 49ERS
This is a battle of two Gary Kubiak disciples as, believe it or not, both of these head coaches, San Fran's Kyle Shanahan and Green Bay's Matt LaFleur, were once Texan offensive assistants about a decade ago. In fact, Mike Vrabel is also a former Texan assistant. Man, if one certain head coach could have held onto a 24-0 lead, then we'd have four teams remaining, all with Texan ties, but alas, he didn't, and here we are. Back to this game, expect to see some mirror image offensively for both teams, with both offenses looking to get their quarterbacks on the move with some play action, helping avoid the fearsome pass rush of both defenses.

In the end, it feels like time for Aaron Rodgers to make a later-in-his-career Super Bowl run. I just trust him to make plays more than I do Jimmy Garoppolo, even though the Niners destroyed the Pack in the regular season. It's playoff time now, I'll back Rodgers.
PACKERS 28, NINERS 26