Opinion: What I Learned From Getting Starbucks With QAnon 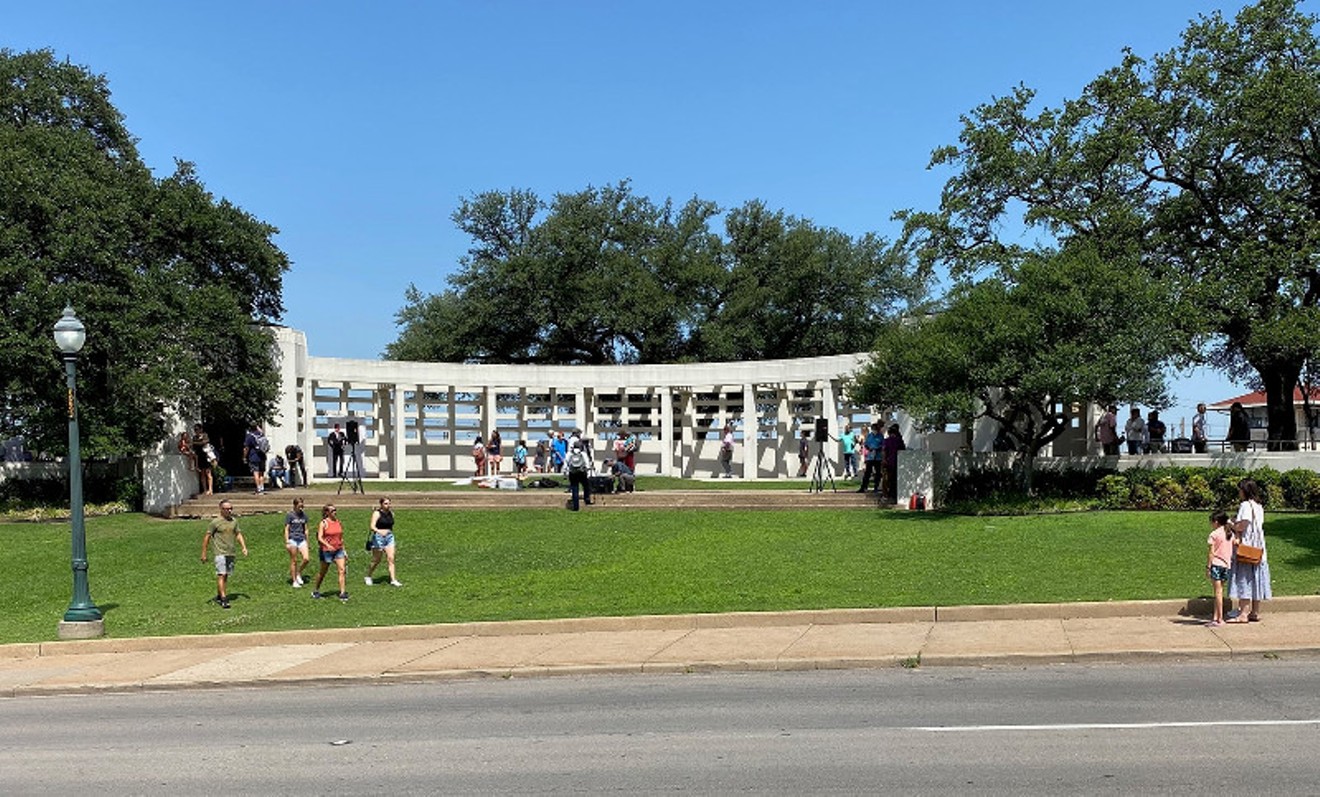 How did Dealey Plaza and JFK ever get tied into QAnon's prognostications? Photo by Jeremy Parzen

The sound of water flowing swept over the lobby atrium of the Hyatt Regency in Dallas as conventioneers streamed in earlier this month.

A classic example of the post-modern architecture that defined hotel design in the American 1970s, the Hyatt was completed the same year as the city’s iconic Reunion Tower, in 1978. Known by locals as “The Ball,” the observation tower was connected to the Hyatt in the late 2000s when the hotel was expanded. Today, the tower can be accessed from the bowels of the hotels on the same subterranean floor where many of the conference rooms are located.

The entire complex lies a short walk — about 1,000 feet — from Dealey Plaza and the Grassy Knoll where Abraham Zapruder shot 26.6 seconds of 8 mm Kodachrome II safety film on November 22, 1963.

Most families began arriving at the hotel on Friday of that week, the first full day of the TMTA — Texas Music Teachers Association — conference, its first gathering since the lockdowns that began in early 2020.

But my wife Tracie and our daughters Georgia, age 10, and Lila Jane, age 8, and I had decided to come up a few days earlier because I had landed a Thursday morning speaking gig in another Dallas ballroom across the city. The girls were to perform in solo piano recitals and with a six-handed piano ensemble led by their private music teacher.

Drowning in the din of the atrium’s large water fountain, it was challenging to discern what a group of 40-50 middle-aged adults was so excited about. They seemed to be huddled around one person as they held their Androids and iPhones aloft trying to capture the moment on video. Unwittingly baited by curiosity, I approached a woman standing on the edge of their minyan.

“Y’all must be here for the music conference,” I said to her as I mustered my best Texas twang.

“No, we’re not,” she answered in perfect New Jerseyan. She smiled nervously.

“Oh, so, what brings you to Dallas?” I pressed.

She turned away from me and beckoned a friend, a woman roughly her same age, to come over. I smiled and they both smiled back at me.

The first woman leaned in closer to me.

“Have you ever heard of Q?” she asked.

Her hushed tone seemed to betray an uneasiness, as if the spectacle of her group’s Trumpophile paraphernalia was something others might notice if she spoke up too loudly.

“If you don’t like Trump,” read the message on another woman’s T-shirt, “then you probably won’t like me. And I’m okay with that.” The text flowed over a distressed American flag.

There must be a psychological term for people who publicly and unapologetically project messages like that to those around them (there is: sociopathy). But hers was on the milder side of the partisan spectrum. Many had T-shirts that said, with no elision or apology, f—- Joe Biden.

“What are all the young Texas music students going to make of this?” I thought to myself as I walked back over to my wife and kids. “These are just little kids!” I said to Tracie. “What are these people thinking?”

As fate would have it, the Wednesday night Q crew would grow as more people with similarly branded T-shirts and caps that said “I told you so” continued to stream in over Thursday and the weekend. They were followers of Michael Protzman, a prolific QAnon influencer and virulent anti-Semite who has openly praised Hitler. As recently as May of this year, he broadcast the following message to his Telegram followers: “there are no Jews. Period. Anywhere. Period. There is no Jewish race. And the Jewish leadership are basically the British empire, the Roman empire, it’s just the criminals.”

He already had told them that the 35th president of the United State would be resurrected in Dealey Plaza in November of last year. After he failed to reappear, Protzman told them that his prophecy would be fulfilled in early June of this year. Nearly a week had passed since the second “second coming,” but these believers were still hanging to their dream that JFK would return and that by some bizarre cosmic connection, this apparition would lead to Donald Trump returning to the White House.

The vibe of the weekend only became more bizarre as cosplay enthusiasts began to show up for Fan Expo, which was also scheduled that weekend in the behemoth hotel. Our youngest nearly fainted when she saw Dr. Strange sit down at one of the hotel’s restaurants with the Ancient One.

Until one of the other music parents did some sleuthing and discovered that they were followers of Protzman, it all appeared to be a harmless gathering of people who want to share their cultish hobby with other likeminded souls. By eavesdropping on their conversations, we learned that many if not most of them had traveled to Dallas from across the country for the JFK resurrection. 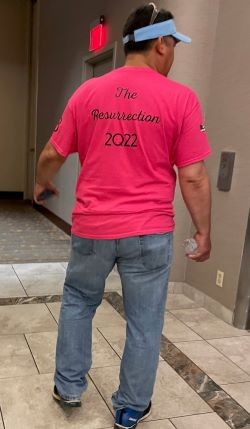 Or whenever it comes
Photo by Tracie Parzen

But once the true driver of this happening came into focus, it dawned on us that we and our children had been getting Starbucks in the morning and drinks in the evening side-by-side with people who very literally believe that Jews are the root of all the world’s current ills. We even exchanged hellos and pleasantries with them, although, throughout our interactions with them, only that first woman was willing to reveal the inspiration for their “convention.” We were surrounded, as it turns out, by Jew haters.

All of this was playing out as the January 6 committee hearings were being streamed. The CNN coverage in our hotel room provided an eerie backdrop to the pageant of post-Truth believers. But our Houston-community bubble in Dallas seemed impenetrable to the QAnon folks. Or to be more precise, they appeared to have no interest in interacting with anyone but their fellow believers.

I thought we were immune to their frankly bat-shit crazy toxicity. But then one of the parents in our group, someone who sends their son to an alternative Christian Boy Scouts camp because the regular Boy Scouts are not Christian enough, spoke up about the masks that the kids were supposed to wear from their performance (we know they go to Christian Boy Scouts because they had come to the ensemble dressed in their uniforms, both father and son).

Even though the masks had been part of the kids’ costumes since the earliest discussions of the trip, he would not allow anyone to force his son to wear a mask, he told the group. Either his son’s mask was to come off or he was pulling from the performance, he declared, not concealing his rising anger at the perceived attack on his family’s dignity. In the end, none of the kids wore a mask at the concert, including our semi-Semite children (I’m a Jew, their mother is a gentile).

It would seem that the “alternative facts” people live among us.

A week later, when I attended a high-end wine dinner in Houston’s Memorial neighborhood (undercooked sausage, overcooked steak, and overly extracted red wine), I told the story of our weekend in Dallas to my dining companions. One couple, both in their 70s, fell silent as I related our experience and at one point they simply turned away and focused their attention elsewhere. As soon as I finished telling my tale, they turned back around and re-engaged with me and the other guests.

It would seem (or does it?) that QAnon and conspiracy theories (like Italygate and the Big Steal) are not so foreign to our community after all. The experience brought to mind a relevant passage from Dante: If evil appetite cry aught else to you/Be ye as men, and not as silly sheep,/So that the Jew among you may not mock you (translation by Henry Wadsworth Longfellow).
KEEP THE HOUSTON PRESS FREE... Since we started the Houston Press, it has been defined as the free, independent voice of Houston, and we'd like to keep it that way. With local media under siege, it's more important than ever for us to rally support behind funding our local journalism. You can help by participating in our "I Support" program, allowing us to keep offering readers access to our incisive coverage of local news, food and culture with no paywalls.
Make a one-time donation today for as little as $1.

Jeremy Parzen writes about wine and modern civilization for the Houston Press. A wine trade marketing consultant by day, he is also an adjunct professor at the University of Gastronomic Sciences in Piedmont, Italy. He spends his free time writing and recording music with his daughters and wife in Houston.
Contact: Jeremy Parzen