There's Never Been a Better Time For the Vulcan Salute 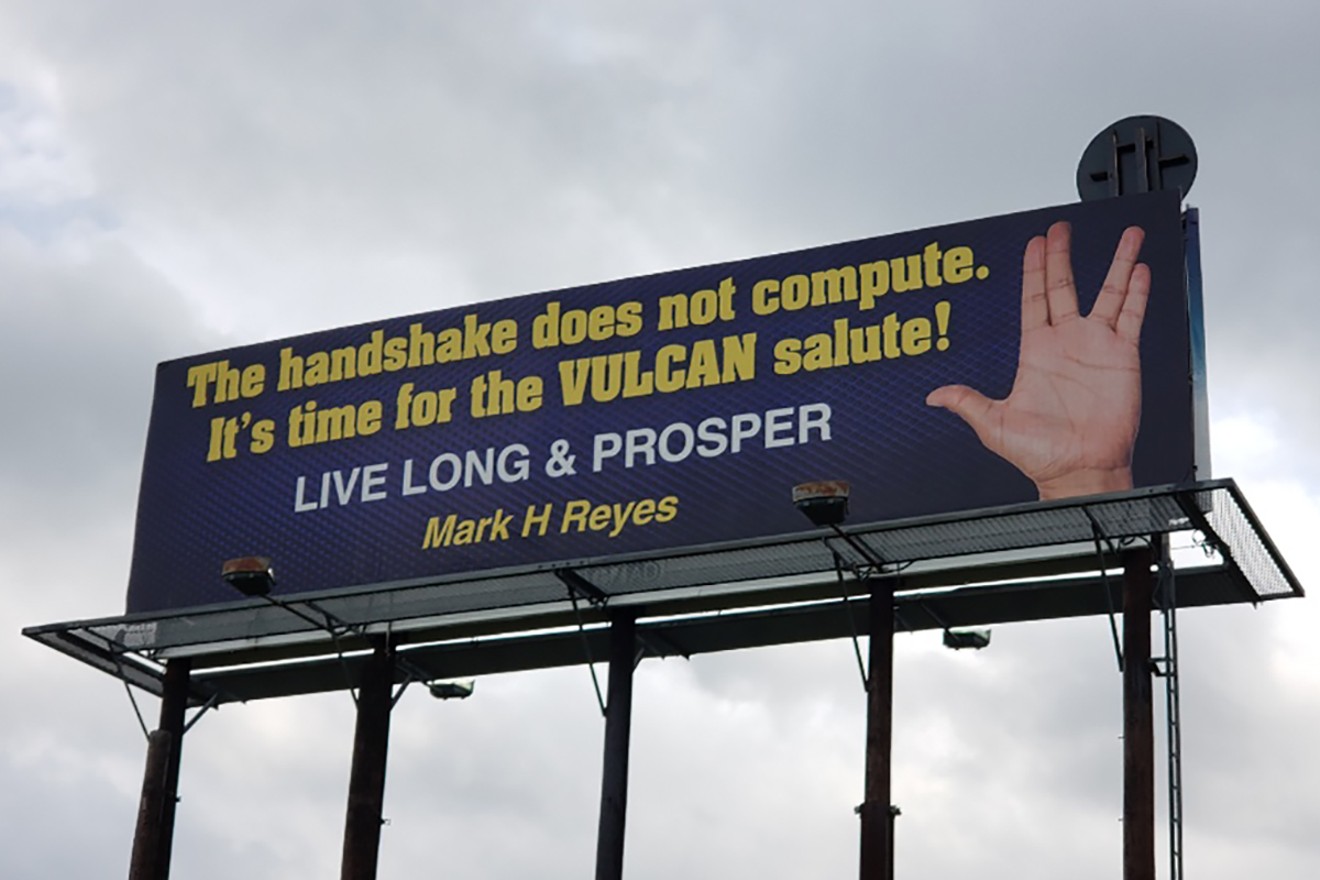 The message we need for right now. Photo by SignAd, courtesy of Mark Reyes

As with all new habits, we've still got some fine-tuning to do. The handshake — an age-old custom designed to show the hand holds no weapon — is now verboten. It seems our hands are in fact weaponized with insidious, invisible little viruses that are hell-bent on demolishing humanity.

We've seen a few alternatives: the Wuhan shake where friends tap shoes together, the fist bump, the elbow nudge, among others. With the exception of the namaste greeting with the respectful head nod, all of these other greetings still involve contact and also violate the prescribed six foot distancing rule.

There's no better time to reinstitute the Vulcan salute, and that's why we need Mr. Spock's message for the here and now, a logical reminder that can now can be viewed on a billboard I purchased along Highway 290 near Chappell Hill. Bluebonnets aren't the only thing cropping up in the country, so are novel anti-coronavirus ideas.

"The handshake does not compute. It's time for the Vulcan salute. Live long & prosper."


In fact, let's expand on that premise and explore how the original television series Star Trek is actually quite relevant during these troubling times.

Star Trek's message is for humanity to put aside its differences and boldly go forward in a united mission. And in this search for a cure we will also find other discoveries tangible and intangible. In fact, Planet Earth may get a much needed break from humanity's incessant need to take, pollute, use up and exploit.

I believe in teamwork, human ingenuity and faith. Star Trek is the best living example where humans/humanoids came together to solve a problem efficiently and logically under the pressure of time. There were many instances where the crew of the USS Enterprise was in a rush to save another planet from a disease or some type of contamination. At the same time, the Enterprise crew was infected with some type of virus or space sickness. True to form, the crew worked in tandem along with the talents of Mr. Spock, Dr. McCoy and engineer Scott and command decisions balanced by Captain Kirk to overcome the impossible.

Vintage science fiction, written decades ago, has become our reality: There's The Naked Time when the crew of the Enterprise was infected with a mysterious disease through physical contact, The Galileo Seven when medical supplies were so desperately needed on the planet Mockus 3, and The Tholian Web where the crew entered a region of uncharted space and became ill.

Uniting the world and our country during this hour of uncertainty needs to be our top priority. Panic is not our friend, but a reminder of what will come without action.

There are simple behaviors that will save lives and stop the spread of SARS-CoV-2, such as avoiding human contact and maintaining our distance. This is a pivotal moment in human history and our next steps will have lasting effects for generations to come. Greetings that involve physical contact or bring us within six feet of another should be avoided; a simple nod or gesture will suffice for now and just may serve as the new cultural greeting moving forward.

Adopting (or re-adopting) the Vulcan salute brings us both a moment of levity while also serving as a metaphor for thinking outside the box. A forever reminder of the COVID-19 disease and how the citizens of our planet can rally together (while remaining apart) to boldly move forward.
KEEP THE HOUSTON PRESS FREE... Since we started the Houston Press, it has been defined as the free, independent voice of Houston, and we'd like to keep it that way. With local media under siege, it's more important than ever for us to rally support behind funding our local journalism. You can help by participating in our "I Support" program, allowing us to keep offering readers access to our incisive coverage of local news, food and culture with no paywalls.
Make a one-time donation today for as little as $1.