HISD Board Told Moving Special Ed Children Off the T.H. Rogers Campus is a Bad Idea 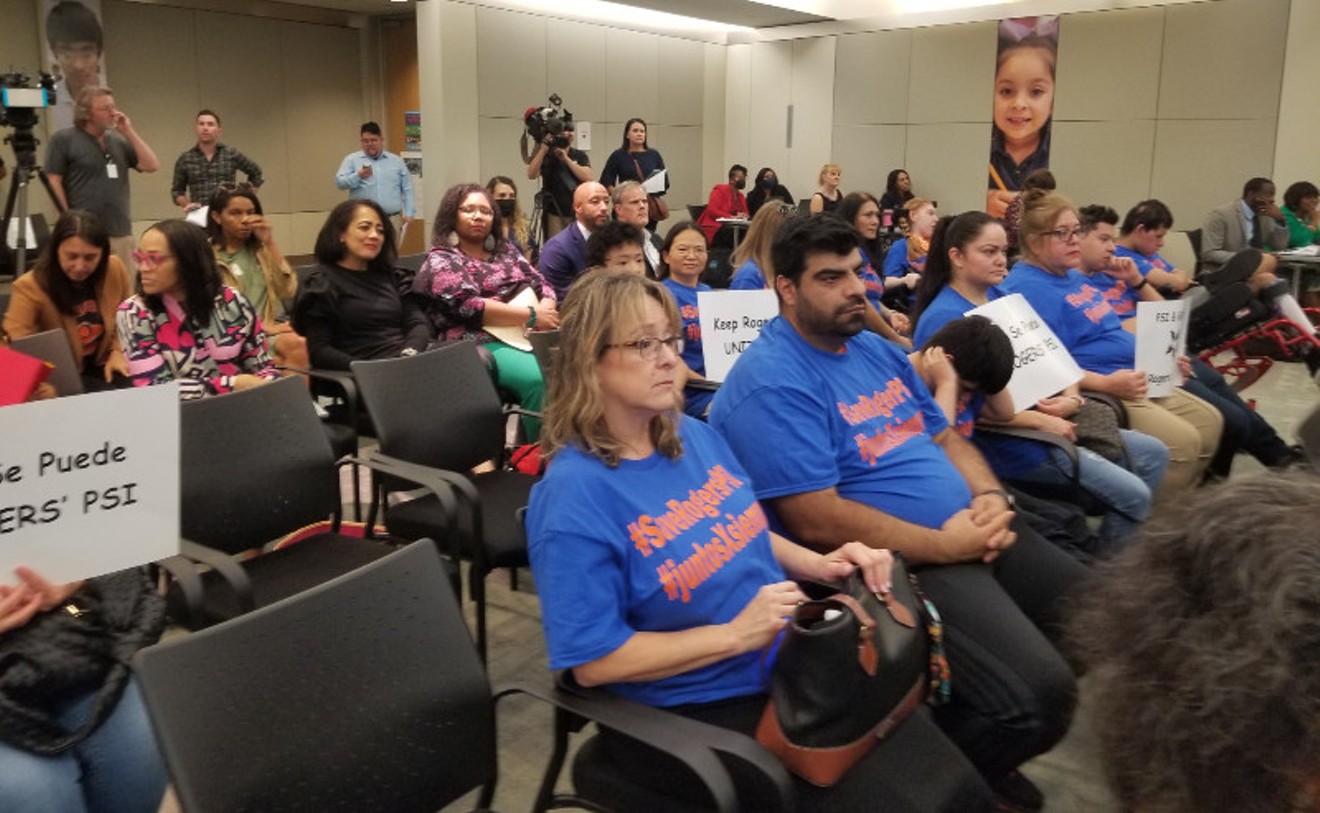 So whose great idea was it to move special ed kids off the T.H. Rogers campus anyway?

Certainly no one was owning up to it at Thursday night's school board meeting as parents and alumni took turns walking up to the speaker's mic or Zooming in to tell Superintendent Millard House II, his administration and the trustees how incredibly stupid this was.

Parents had aired many of their concerns at a November 18 meeting at Rogers with administrators. This time House himself and the school board got an earful.

As we reported Thursday afternoon, earlier that day the staff at T.H. Rogers were told by letter from Chief Academic Officer Dr. Shawn Bird  that the planned transition had been "temporarily paused" and that "Parent Feedback is critical to this process." That last part being a little hard to take at face value since for the past 11 months (or more) parents hadn't been included in any of the discussions about this major change affecting their children and themselves.

The decision to hit pause took place after House and a few of his administrators met Tuesday with a small group of parents, during which the superintendent conceded that the announcement — delivered by letter via students' backpacks — hadn't gone smoothly. He also said he'd talked with Texas Commissioner of Education Mike Morath on Monday asking for help in sorting out the situation, after so many T.H. Rogers parents and alumni had reacted so negatively to his plans.

He told those parents alternatives might include housing two separate schools on the same Rogers campus.

A series of individual and group meetings between parents and HISD administrators will be held to listen and take in their input and while nothing is certain that this will change anything, at the very least administrators are now willing to listen.

For years the school has been awarded all kinds of honors for its unique operation in which three different groups — the deaf, special ed and Gifted and Talented students — are all housed in the same school. At the end of the last school year deaf kids were removed from Rogers and sent to several district schools. Now the plan HISD came up with — if it goes forward —is to do the same with the special ed population, and instead expand the GT program at the K-8 school in the 2023-24 school year.

Several speakers expressed concern that regular classrooms and their teachers are not equipped to handle the needs of special ed children.

"Rogers PSI children are amazing souls but they have incredibly complicated school days that would be highly disruptive to regular ed students and teachers," she said. "PSI classrooms include explosive bowel moments, vomiting, uncontrollable crying, screaming, seizures, respiratory distress, self-stimulation behaviors like shaking, and rocking. Flailing arms and legs uncontrollably. And the beeping and the vibrating of the different machines and equipment that's required in most classrooms every day.

"But Rogers PSI [Preparing Students for Independence] classrooms are designed to handle these things with maximum support and minimal disruption."

Parent Ruthie Green talked about her son who was born with severe underdevelopment and a small brain. "His brain now is the size of an infant's and he functions at that level." She said he has seizures during which he completely stops breathing. "You have about five minutes to administer his anti-seizure medicine plus oxygen so that you won't cause even more damage to a brain that's already had some damage."

Jose Sanchez, father of a PSI student, was overcome with tears and couldn't talk for a while before addressing the board. "I just don't understand why this is happening. T.H. Rogers is good. The people are good. Everybody's good. We did our research and T.H. Rogers is the school for our kids to go to.

"I don't understand going back to their local schools. What's that going to resolve?" he asked. "It's going to throw us back 30 years," he said.

Parent Julie Beeson whose son is in special ed at Rogers, urged House when he talks to the Commissioner of Education to "talk about LRE (Least Restrictive Environment) and how LRE does not apply to our children.

"You  can look at our children. Our children are never going to live independently. Even the name of our children [PSI] is marginalizing for us." Change their name to 'medically fragile' like it was in Spring Branch. Make them their own little entity. Check whatever box you have to check to make this work," Beeson said.

Several parents of children in the Vanguard program said they sent their children to Rogers specifically because of the presence of the deaf and special ed programs there .

Millner and Beeson filed a public information request for any communication between the TEA and HISD about assessments of the Rogers PSI program, any recommendations and directives shared by TEA with HISD concerning the PSI program at Rogers  or basically anything concerning moving special ed students out of Rogers, TEA has responded that there were no documents to that effect.

It follows then, said attorney and Vanguard parent Melvin Huang "that the board has the authority to make that decision," and could go ahead and change course right now. He added that in the lack of communication in the whole process was "a violation of the board's own policies regarding transparency."
KEEP THE HOUSTON PRESS FREE... Since we started the Houston Press, it has been defined as the free, independent voice of Houston, and we'd like to keep it that way. With local media under siege, it's more important than ever for us to rally support behind funding our local journalism. You can help by participating in our "I Support" program, allowing us to keep offering readers access to our incisive coverage of local news, food and culture with no paywalls.
Make a one-time donation today for as little as $1.