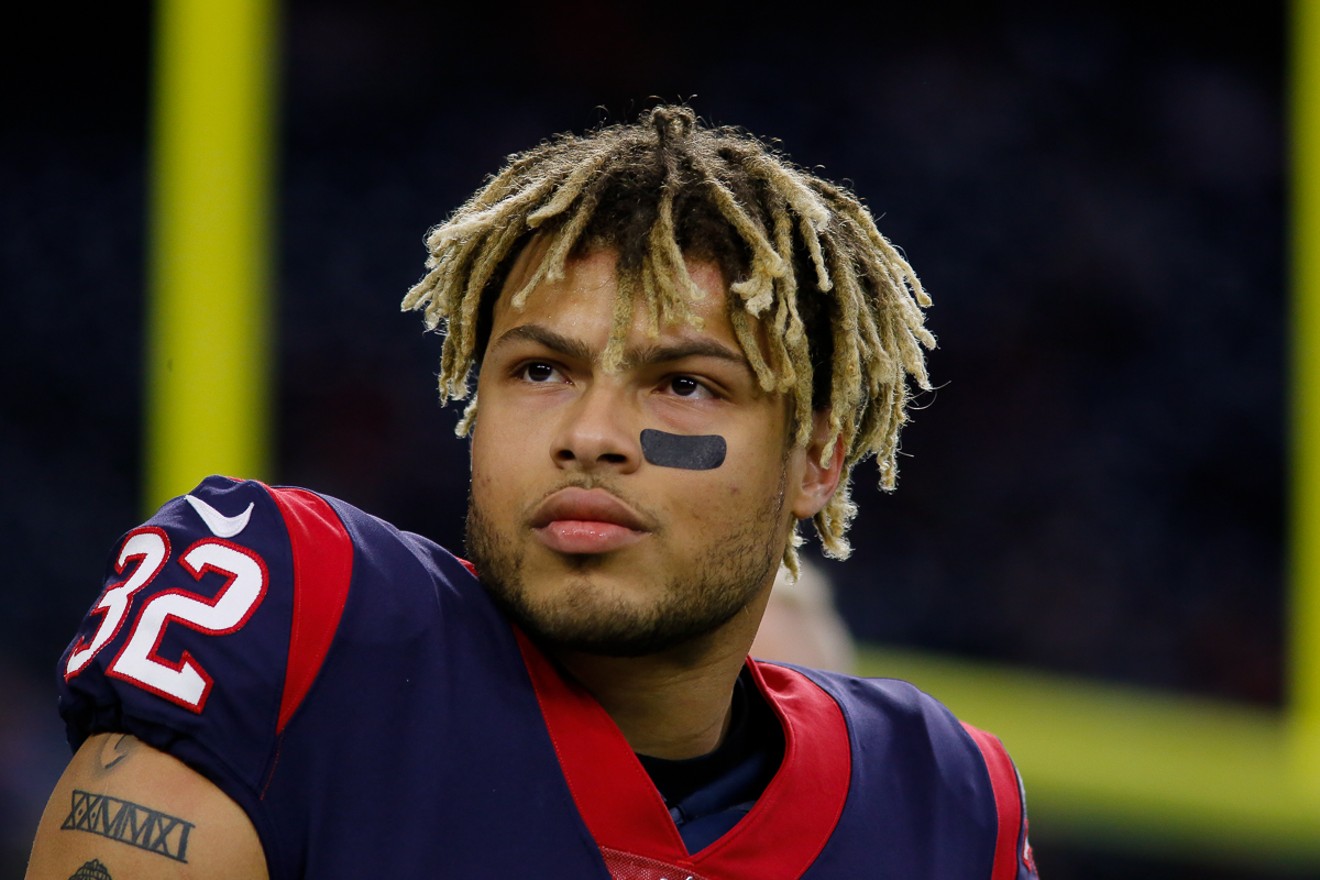 The signing of Tyrann Mathieu was one of Brian Gaine's better offseason moves of 2018. Photo by Eric Sauseda
As off-seasons go, this one should more closely resemble what Houston Texans general manager Brian Gaine will become accustomed to during what is hopefully a long and successful reign as the architect of this franchise's roster. Last offseason was short on both resources and time, as the team was lacking a first and second round picks in the draft, and Gaine was brand new to the job in January.

Now, Gaine has his staff in place, his scouts in place, and the team is flush with resources to fix the soft spots on the roster, what with notably a first round pick, but two second round picks, as well. Additionally, the Texans are among the league leaders in expected salary cap space entering free agency.

It was only one, slightly off-kilter offseason, but let's see if we can at least learn a thing or two on what to expect from Gaine in the coming months based on how he functioned in the last year as a the team's general manager. So without further ado, here is my hindsight report card on all of Gaine's moves in 2018, leading up to the season and during the season:

A+
Drafted S Justin Reid in 3rd round
Gaine's first draft pick was his best move so far as Texans GM. Reid looks like a future cornerstone piece, as he routinely made game changing plays all season long, including a 101-yard pick six to essentially win the Washington game in November. Reid was a sure tackler, and a first team all-Rookie selection.

A
Drafted WR Keke Coutee in 4th round
This grade isn't necessarily for the type of season Coutee had, but more the potential that the slot receiver flashed, when healthy. It appears Coutee is going to wind up being a great selection, if he can get these mysterious hamstring issues figured out. Clearly, this has the makings of a great pick, and I'll give Gaine the benefit of the doubt that Coutee will resume being healthy next season, as he'd been his whole career at Texas Tech.

A
Overall special teams facelift -
I'm grouping the signings and pickups of Johnson Bademosi, Joe Webb, Buddy Howell, A.J. Moore, Mike Tyson, and anyone else not listed here who made plays on special teams in one bullet point item. Gaine's keen focus on unearthing special teams aces was the driving force behind the Texans' surging to the upper quartile of special teams in the league.

A-
Signed S Tyrann Mathieu to a 1 year, $7 million ($6.5 million guaranteed) deal
Mathieu's play was probably closer to a B than an A-, but this move gets the A- for the value and for Mathieu's leadership. If the Texans re-sign Mathieu to a long-term deal, he will need to play better to achieve an A- grade again.

A-
Picked up WR DeAndre Carter off waivers in Week 9
The Texans found a guy on the waiver wire, and he became their regular kick and punt returner, and by the end of the year, he was the No. 2 receiver (mostly due to injuries, but still). That's pretty good.

B+
Extended ILB Bernardrick McKinney on a five-year, $50 million ($21 million guaranteed) deal
McKinney made his first Pro Bowl, and expanded his game, improving in coverage and making some splash plays in the second half of the season. I didn't think he'd be worth the money, and the extension kicks in this coming season, but so far, so good.

B+
Drafted TE Jordan Thomas in 6th round
Thomas flashed some red zone chops, and for a sixth round pick, looks like he will be a real keeper.

B
Drafted OLB Duke Ejiofor in 6th round
Ejiofor flashed big with some pass rushing in the preseason, but it was tough having it translated in the regular season. Injuries were an issue during the middle part of the season. The big question with Ejiofor will be "Does he show enough for the team to feel like he can be a viable replacement for Whitney Mercilus, and if so, how soon?" His cap hit is about a tenth of Mercilus'.

B
Drafted ILB Peter Kalambayi in 6th round
Solid special teams guy, and some necessary depth when injuries wrecked the inside linebacker depth chart in November.

B-
Drafted TE Jordan Akins in 3rd round
The later bloomer of the two rookie tight ends, but appears to have a solid physical skill set.

B-
Re-signed CB Johnathan Joseph to a two-year, $10 million ($3.9 million guaranteed) deal
Had some very solid games and a few really rough games, usually against teams with high end speed guys at wide receiver. Joseph was miscast as the team's No. 1 cornerback, but if he's back as the second or, even better, third cornerback, he's certainly worth having around.

B-
Traded 2019 4th round pick for WR Demaryius Thomas
This move gets a solid grade based on (a) the sense that it made at the time, (b) Thomas' fit in the locker room, and (c) the enthusiasm generated by having a forward-thinking GM. Thomas' impact was muted by the adjustment period to a new system, and on the back end, the season ending injury. Still, I liked the move, and the grade might be a half a letter grade higher if Thomas remained healthy, and was open to a redo on his final contract year.

C
Signed OL Senio Kelemete to a three-year, $12 million ($5 million guaranteed) deal
Signed OL Zach Fulton to a four-year, $28 million ($13 million guaranteed) deal
I'll group these two together, since they were signed within like a day of each other, and were the starters for most of the season. Both were just OK, both dealt with injuries, and both are up for replacement if the Texans find a suitable upgrade.

C
Signed UDFA WR Vyncint Smith
Aside from having the most frequently "corrected by autocorrect to something else" name on the team, Smith had one big play in his rookie year — the go ahead touchdown late in the loss to the Eagles. The team clearly sees something in him, as they kept him on the 53-man roster all season, largely inactive until the depth chart got ravaged by injuries.

D
Drafted OL Martinas Rankin in 3rd round
The biggest disappointment of the drafted rookies, although I'm not sure he was really put in a great position to succeed. He's probably more built to be a guard, but once the injuries hit the tackle position, he was out there as a left tackle, then benched a few games in. Jury is still out, but it was an inauspicious first season, for sure.

F
Signed CB Aaron Colvin to a four-year, $34 million ($18 million guaranteed) deal
The talk before the season on Colvin was some subdued excitement that he could be a versatile piece of the secondary, playing either inside (his strength) or outside (unknown). As it turned out, he could only play inside, and he didn't even do that very well. Injuries played a role, as he hurt his ankle in Week 4 against Indianapolis, but it was an abysmal season for Colvin. He'll be back in 2019, largely because it would cost more on the cap to cut him than keep him.

INCOMPLETE DUE TO INJURY
Draft CB Jermaine Kelly in 7th round
Enthusiastic rookie was injured during training camp, and played on injured reserve before the start of the 2018 season. Opportunity will be there to make an impact in 2019, with the CB position set for some churn.

Signed OL Seantrel Henderson to a 1 year, $4 million ($1 million guaranteed) deal
Henderson sustained a broken ankle in the first half of the season opener in New England, which set in motion all kinds of movement at the tackle position. Henderson re-signed last week with the Texans on a one-year deal.

Signed street free agent CB Kayvon Webster late in the preseason
Webster was coming off an Achilles tear with the Rams in 2017. He hurt his quad two plays into his Texans career, went on injured reserve, then came back late in the season, and re-injured himself a few plays into his comeback. About as short and undistinguished a Texans career as you'll find.

Listen to Sean Pendergast on SportsRadio 610 from 2 to 6 p.m. weekdays. Also, follow him on Twitter at http://twitter.com/SeanTPendergast and like him on Facebook at facebook.com/SeanTPendergast.
KEEP THE HOUSTON PRESS FREE... Since we started the Houston Press, it has been defined as the free, independent voice of Houston, and we'd like to keep it that way. With local media under siege, it's more important than ever for us to rally support behind funding our local journalism. You can help by participating in our "I Support" program, allowing us to keep offering readers access to our incisive coverage of local news, food and culture with no paywalls.
Make a one-time donation today for as little as $1.