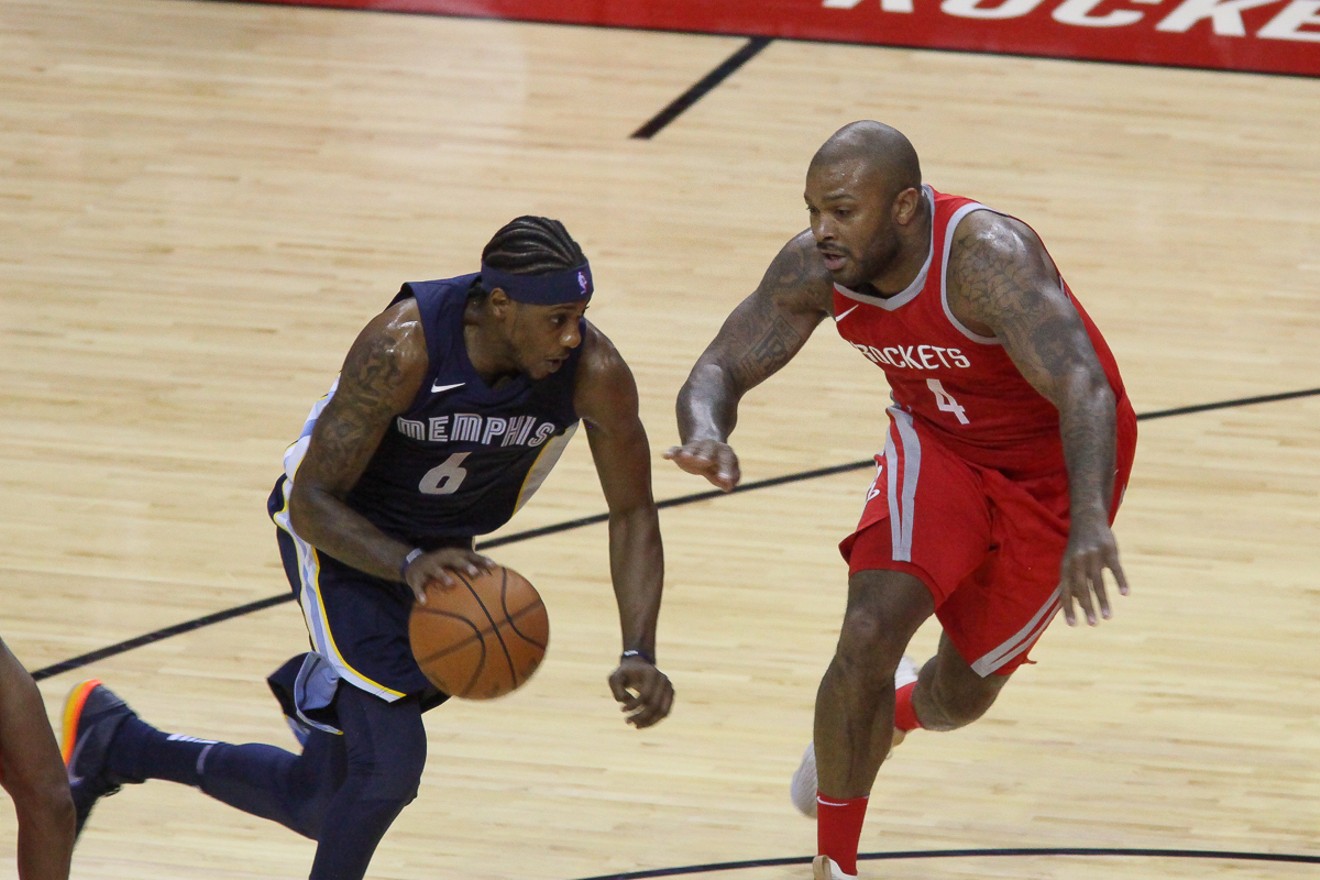 P.J. Tucker managed to avoid injury after a fall on Sunday, but with five games left, it's tough to balance resting guys with keeping their rhythm intact. Photo by Eric Sauseda
"Everybody wants rest, rest, rest. Well, they've got to play. Otherwise, we're going to lose the advantage of what we worked for for 80 games, and it's scary times for us. You've got to bring it and you've got to bring it every day."

After the Rockets blowout loss to the San Antonio Spurs on Sunday, Coach Mike D'Antoni didn't mince words. The Rockets may have locked up home court advantage throughout the playoffs by the time of tipoff against Phoenix on Friday, but they haven't won anything yet and D'Antoni knows how delicate the rhythm of NBA teams can be heading into the playoffs.

Over the past week, the team has given a handful of players days off, some more than others. The idea is to give some rest to guys who are nursing nagging injuries (Luc Mbah a Moute, Ryan Anderson, Chris Paul), while keeping others fresh for the playoff run (Eric Gordon, Nene). It is a popular theory among fans that the team is much better off resting everyone down the stretch now that the playoff seeding has been determined, but the Rockets coach may not agree.

There is no greater equalizer in any team sport than health. Ask the 2017 Texans or, for that matter, the 2007-08 Rockets, who won 22 games but fell in the playoffs after being overrun by injuries, particularly to Yao Ming. But, too much rest can be a problem as well. The rest versus rust debate has been going on for decades when it comes to teams that sweep a playoff series as compared to those who play six or seven games. Will the rested team show up and play poorly in game one because they haven't been playing? Sometimes yes, sometimes no.

With certain teams, particularly those with veterans who have won championships (Spurs, Warriors, etc), rest might be the smartest thing. Their players know what it takes to win and understand what they need to do to get back in rhythm. But, what of teams like the Rockets who have never been there before?

When P.J. Tucker took a nasty spill against the Spurs and Gerald Green briefly went to the locker room after an awkward collision, the outcry began to rest players to avoid injury. But, as D'Antoni points out, that isn't always the best solution.

If the playoffs began Monday, the Rockets would face the New Orleans Pelicans in round one. But, just a few wins or losses either way and it could be the Spurs, Thunder, Jazz, Nuggets or Timberwolves. The Rockets simply don't know who they will face and they can't take for granted that team will be a pushover. It seems unlikely, but if the Spurs fell to the eighth spot, that could be a tough match up for any Rockets team, but particularly for one that wasn't playing well going into the series.

Whoever the Rockets meet in the first round, they should beat. In most cases, they should obliterate them. And being healthy is alway the top priority. But, as the Rockets coach is aware, chemistry and rhythm play an important role as well. With only five games remaining in the regular season, there is ample time to work out the kinds AND preserve health. But, it shouldn't be either or.