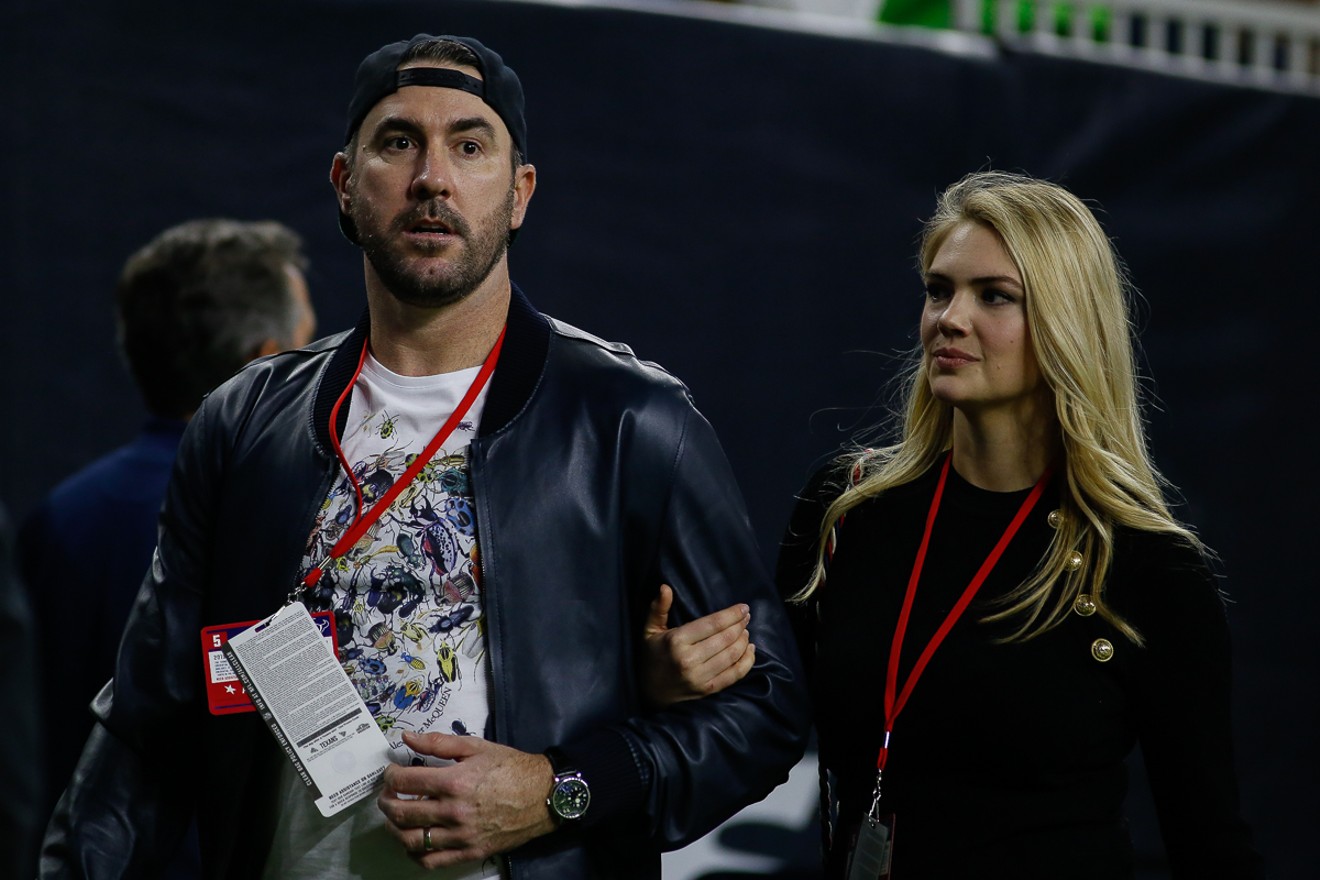 We wonder how Justin Verlander would react if a Hollywood producer asked his wife, Kate Upton, to hang out in the stands waiting for sex. Photo by Eric Sauseda
We know that news organizations are doing everything they can to find ways to keep sports writers busy (ahem). We get it. Professional sports writers have struggled to keep things interesting and, as such, so have the publications they write for. So, we should all cut them some slack when it comes to stories that seem to stretch the boundaries of sports to their very limit.

But, then there are the completely asinine ideas like one recent story from the Los Angeles Times, an outstanding news organization, their need to cover LA sports notwithstanding. Some genius had the idea to talk to Hollywood types about how they would spice up baseball (behind paywall) when it does finally return to live games. Given their location, it probably sounded like a cute idea until they decided to include the opinion of producer Mike Fleiss, who gave The Bachelor to the world. Because no doubt some reality show stooge would have some killer ideas about how to make baseball more fun.

And before you think, "Oh, well, this guy is just have some silly ideas," think again because Fleiss went in a direction that should have been expected, but nevertheless was enough to make us feel like we needed a shower.

He began, rather benignly, with the idea of amplifying trash talk on the field, increasing microphone volume and letting the fans hear it. Probably not a great idea for network TV, but not an awful idea. Then, there was this...

Fleiss is aware that some players, including the Dodgers’ Clayton Kershaw and Angels’ Mike Trout, have objected to the possibility of a bubble environment, in which they would be isolated from their families. For argument’s sake, let’s leave aside the issue of children and focus on players not seeing their wives or girlfriends, perhaps for months.

“The biggest problem with why sports leagues will never do it is that I don’t think the players will be able to maintain quarantine. These guys are never going to be able to go cold turkey. You’ve got to be able to embrace that truth and make that part of the game.”

Remember, Fleiss is the guy who dreamed up “The Bachelor.”

“You can [film] all the girls. They’re beautiful. They’re in the stands, separated in their own sections or whatever. Those guys are now playing for more than the pride of winning a baseball game. If you go on an eight-game losing streak, that’s not good.”


We'll give you a moment to pick your jaw up off the floor.

First, a number of players including two of the sports best have voiced concern about their inability to see their families, not wives, families. But, Fleiss is nonplussed and dives right into, "These guys are so pumped up on testosterone, how could they stay in a bubble? These guys gotta f***, right?" Gross.

Nevermind the old "men can't control themselves" argument, but think of how he just reduced these players' wives to living sex dolls whose entire job is just to sit around and wait for their husbands to get it on.

Juvenile and puerile, sure, but what came next was, honestly, astonishing. Fleiss actually suggests that they put the wives or girlfriends in the stands as some kind of eye candy for dudes staring at their televisions. It's not only sickening, it's potentially dangerous given many wives and girlfriends keep a low profile for a reason.

But, then, here comes what has got to be one of the most outrageous and moronic suggestions of all time, sports or otherwise. Fleiss not only wants the ladies in the stands, but he wants them to sit there, looking hot, and waiting to see if their husbands win. If they do, it's time for the the sexing! If not, insert sad trombone sound.

It shouldn't shock anyone that the douchebag creator of one of the dumbest reality shows ever invented would decide to treat women like objects of sexuality without any other thoughts in their pretty little heads than how to please their men and do so at a moments notice, like a first responder...or a call girl! But, the fact that the LA Times ran this garbage in the sports section is a low moment for them and the world of sports.

It is difficult to enumerate the ways this story should have been destroyed before it hit the print or website. Printing it out, setting it on fire and tossing it into Fleiss's swimming pool after filling it with gasoline was the first thing that came to mind, but we are open to suggestions.

God, please let sports get started again soon.
KEEP THE HOUSTON PRESS FREE... Since we started the Houston Press, it has been defined as the free, independent voice of Houston, and we'd like to keep it that way. With local media under siege, it's more important than ever for us to rally support behind funding our local journalism. You can help by participating in our "I Support" program, allowing us to keep offering readers access to our incisive coverage of local news, food and culture with no paywalls.
Make a one-time donation today for as little as $1.