Tuesday’s primary runoff election felt just a tad different from the pre-pandemic voting days Houstonians are used to. Held in the blistering July heat after being postponed in May thanks to the coronavirus, Tuesday’s election led Houston voters to line up in a socially distanced fashion in their face masks across town, where they waited to receive sanitizing wipes and plastic finger cover slips to ensure a sanitary experience with the voting kiosks. Welcome to the new normal.

Chief among Tuesday’s races was the contentious fight to go up against Republican U.S. Senator John Cornyn in November, where Democrat MJ Hegar looks to have eked out a narrow four-point victory over state Sen. Royce West of Dallas. Hegar, a former Air Force pilot and a political newcomer, was anointed early on in the race as the national party’s favored candidate after securing the support of the Democratic Senatorial Campaign Committee back in December.

The Associated Press called the race for Hegar late Tuesday night and Hegar publicly declared victory, but West said he wasn’t conceding yet and would give an update early Wednesday.

Hegar previously finished first in the March 3 primary, gaining 22 percent of the vote compared to West’s 15 percent in a crowded field that included Houstonians Amanda Edwards and Chris Bell. Back in 2018, Hegar lost her race for the U.S. Congress in Texas’ District 31 to incumbent Republican congressman John Carter.

West, a longtime presence in the Texas Legislature who much of the state Democratic party eventually rallied behind, gained momentum in the later weeks of the race by highlighting his past work on criminal justice reform in the wake of widespread protests over police brutality following the killing of George Floyd. West was hoping to be Texas' first black U.S. Senator.

In the campaign’s final days, West attacked Hegar for a $10 donation she made to John Cornyn back in 2011 and for voting in the 2016 Republican presidential primary, which he claimed were reasons voters should be skeptical of her loyalty to the Democratic Party. Hegar said her donation was an attempt to get face time with Cornyn and that her 2016 primary vote for Carly Fiorina was an attempt to prevent Donald Trump from becoming the Republican nominee, while alleging that West used his position in the state legislature to benefit his private legal business.

Hegar will now go on to challenge Sen. Cornyn, who has served in the Senate representing Texas for almost 18 years. A recent CBS News poll showed Cornyn up eight points in a hypothetical November election matchup against Hegar.

In a more local race just southeast of Houston, Fort Bend County Sheriff Troy Nehls trounced conservative fundraiser Kathaleen Wall of Houston in the race for the Republican nomination for U.S. House District 22, which covers Sugar Land, Katy and Pearland. Early returns on Tuesday night showed Nehls in the lead by a margin of 71 percent to Wall’s 29 percent, despite the fact that Wall poured over $8 million from her own pocketbook into the race while Nehls had raised less than half a million dollars as of the first week of July.

This isn’t the first time that Wall broke the bank while failing to win her party’s nomination for a seat in Congress — back in 2018, Wall failed to even make the runoff in the GOP primary for the 2nd Congressional District even though she spent almost $6 million. Wall also gained notoriety this cycle for a campaign TV ad that referred to COVID-19 as the “CHINESE VIRUS” and claimed that “China poisoned our people,” which was denounced by Asian American advocacy groups as racist.

Despite its history of reliably electing Republicans, the district has been labelled by the nonpartisan Cook Political Report as a toss-up after incumbent Republican Congressman Pete Olson announced he wouldn’t be running for reelection in 2019. Nehls will run against Democratic nominee and former foreign service officer Sri Preston Kulkarni, who lost his last race for this seat against Olson by a narrow 5 percent margin in 2018. 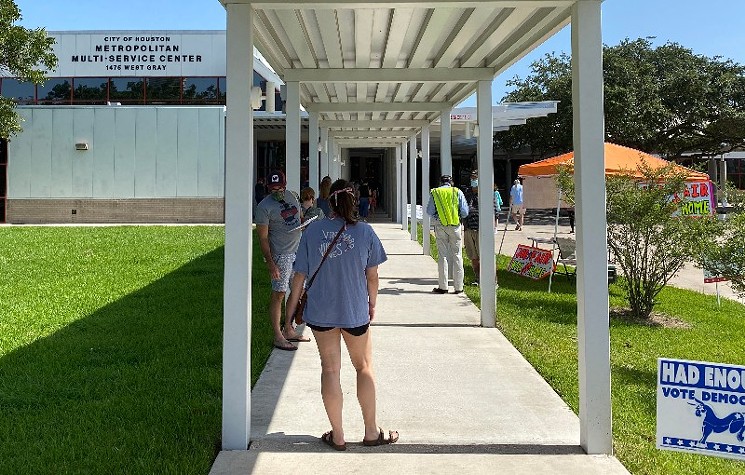 Looking at Houston-area Texas House districts, the long-tenured state Rep. Harold Dutton beat Houston City Councilman Jerry Davis by a four percent margin in the Democratic runoff for Texas House District 142, which covers Houston’s Fifth Ward neighborhood. Dutton is now one step closer to hanging on to the seat he’s held for the past 35 years after facing criticism about his role in crafting the legislation that led to the Texas Education Agency’s attempted takeover of the Houston Independent School District.

In northwest Houston’s Texas House District 148 runoff, former HISD board member and incumbent Democratic state Rep. Anna Eastman conceded to Houston attorney Penny Morales Shaw after election night returns showed Shaw up just 200 votes in their race for the Democratic nomination. Eastman had previously won a special election runoff for the seat back in January, and is currently serving out the remainder of Rep. Jessica Farrar’s term after Farrar resigned back in September.

Tuesday’s election also involved multiple runoffs for spots on the State Board of Education, including a closely watched matchup between Austin speech pathologist Lani Popp and Robert Morrow, an Austin area conservative provocateur and conspiracy theorist who’s famous for wearing a jester’s hat and making heinous racist and sexist comments over the years. Morrow, who calls himself a performance artist, somehow managed to snag first place in the March primary despite hardly mounting a campaign and publicly admitting he didn’t think he had any real shot at winning.

Popp was endorsed by all nine Republican members of the SBOE, the body that determines textbook curriculum within the state, who were clearly panicked at the prospect that they might have to work with someone as toxic as Moore. Early returns showed Popp with an insurmountable lead with 78 percent of the vote compared to Morrow’s 22 percent.

Visit the Texas Secretary of State website for a full list of election returns.
KEEP THE HOUSTON PRESS FREE... Since we started the Houston Press, it has been defined as the free, independent voice of Houston, and we'd like to keep it that way. With local media under siege, it's more important than ever for us to rally support behind funding our local journalism. You can help by participating in our "I Support" program, allowing us to keep offering readers access to our incisive coverage of local news, food and culture with no paywalls.
Make a one-time donation today for as little as $1.