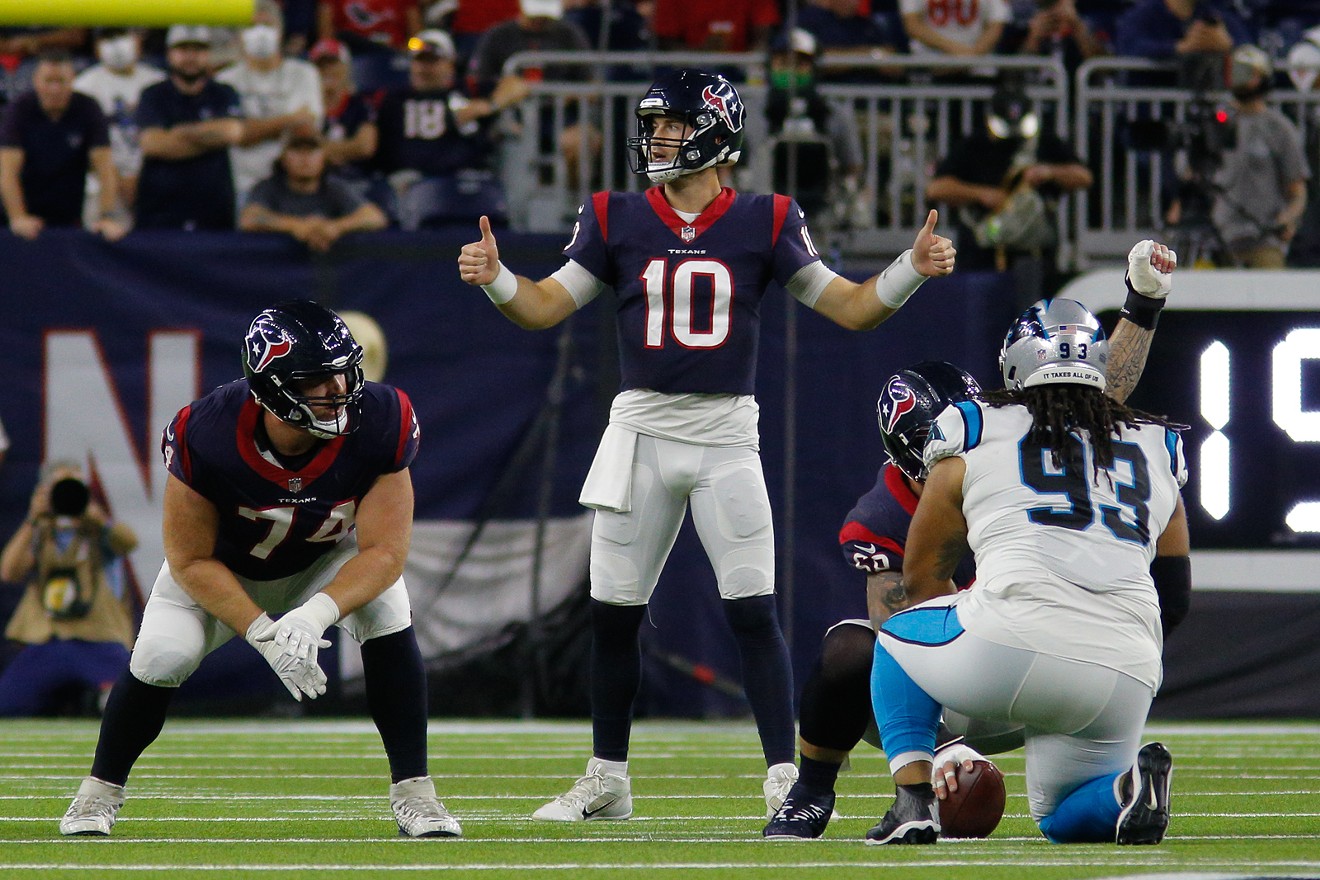 Davis Mills will try to get his first win as a starter in a rough spot for the Texans historically, Indianapolis. Photo by Eric Sauseda
Five weeks into the 2021 NFL season, if someone had told you there would be two 1-4 teams in the AFC South, you would have thought that person was perfectly sane. Is the same person told you one of those teams was the Houston Texans, that would have checked out. However, it falls apart from there. The guess on the other 1-4 team would most certainly have been Jacksonville, yet somehow they're even worse than 1-4, at 0-5.

Instead, the Texans' 1-4 divisional counterpart are the Indianapolis Colts, who have been buried under a sea of crazy injuries, and some predictably mediocre play from the newly acquired Carson Wentz at quarterback. The Colts are a flat out weird team. Their head coach and general manager are widely revered around the league as the quintessential "guys who are good at their jobs," and yet through 53 games that combo is a quite average 29-24.

It's only fair to point out that they are on their fourth starting quarterback in four years. Yes, the retirement of Andrew Luck in the summer of 2019 has sent them into an unenviable QB tailspin. However, the rest of the roster, when healthy, is good. Not great, but good, and the core is fairly young. In other words, this team SHOULD be better than 1-4, and that's likely reflected in the ten point spread on this game.

Indeed, for the third time in three road games, the Texans are double digit underdogs, as they head to Indy to face the Colts on Sunday. It's one thing to be a double digit underdog to the Browns or the Bills. Catching ten points to a 1-4 Colts team feels a little disrespectful. Let's look at a few things to watch for in Sunday's noon kickoff.


4. Colts attempt to bounce back
The Colts appeared on the verge of turning their season around on Monday night in Baltimore, leading the Ravens 22-3 in the third quarter, and firmly in control of a game against a perennial playoff team and MVP candidate quarterback. Unfortunately for the Colts, they allowed Lamar Jackson to hang round in this game, they missed several chances to put the game away, including a couple missed field goals, and the Ravens won the game in overtime. So instead of getting an invigorating road win, and having this game against the Texans as a layup to climb back to .500, the Colts now must keep from having the Ravens figuratively "beat them twice," once from the actual loss, and a second time by having the "Ravens' hangover" allow the Texans beat them.

3. Wow, this Texans' offensive line, though
In a year where the Texans were expected to compete for something other than the first overall pick in the draft, the news of Laremy Tunsil seeking surgery on a torn UCL in his thumb would be devastating. He is the team's highest paid player (not named Watson), and he protects the blind side for whoever is playing quarterback. Now, it will be Geron Christian taking over at left tackle. The Texans have already had to replace right tackle Marcus Cannon (back injury) with second year man Charlie Heck, and the interior of the offensive line has not performed well. The Texans have been the worst rushing offense in football (dead last in rushing DVOA), and it probably doesn't get better with two brand new tackles going against a Colts defense that is 2nd in the league in rush defense DVOA).

2. T.Y. Hilton, Texans arch nemesis
If you were creating an all-time Texans opponent team, based solely on players' performances against the Texans, T.Y. Hilton would be the team captain and the first inductee into the team's Ring of Honor. Even as Hilton's game has slipped the last few years from its peak of four or five years ago, Hilton still will typically dial up big games in Houston:


Carson Wentz on TY Hilton: 'Rumor is he's been pretty good in this series (against the Houston Texans)'

Hilton has seven games of at least 100 yards, including one of more than 200 yards, in his career against the Texans.

Thus far this season, Hilton has been banged up, but it looks like he is practicing this week:


The #Colts announced they are activating WR TY Hilton (neck) to return to practice this week. He remains on IR, but this is a good sign moving forward.

1. Davis Mills next steps
I don't know if I can recall a quarterback, let a lone a ROOKIE quarterback, making a bigger jump from one game to the next than Mills in between the 40-0 loss to the Bills and last weekend's close loss to the Patriots. In the loss to the Bills, Mills looked like a high school kid who won a contest to play in the NFL for a day. Against the Patriots, Mills made throws to every part of the field, went through his progressions, and for most of the first three quarters, made big throws in crucial situations, including king 3-3 on fourth down conversions. Matt Eberflus, the Colts DC, is an experienced coordinator who was in the running for the Texans head coaching job, and my guess is he will want to show the Texans what they're missing out on by flummoxing Mills.