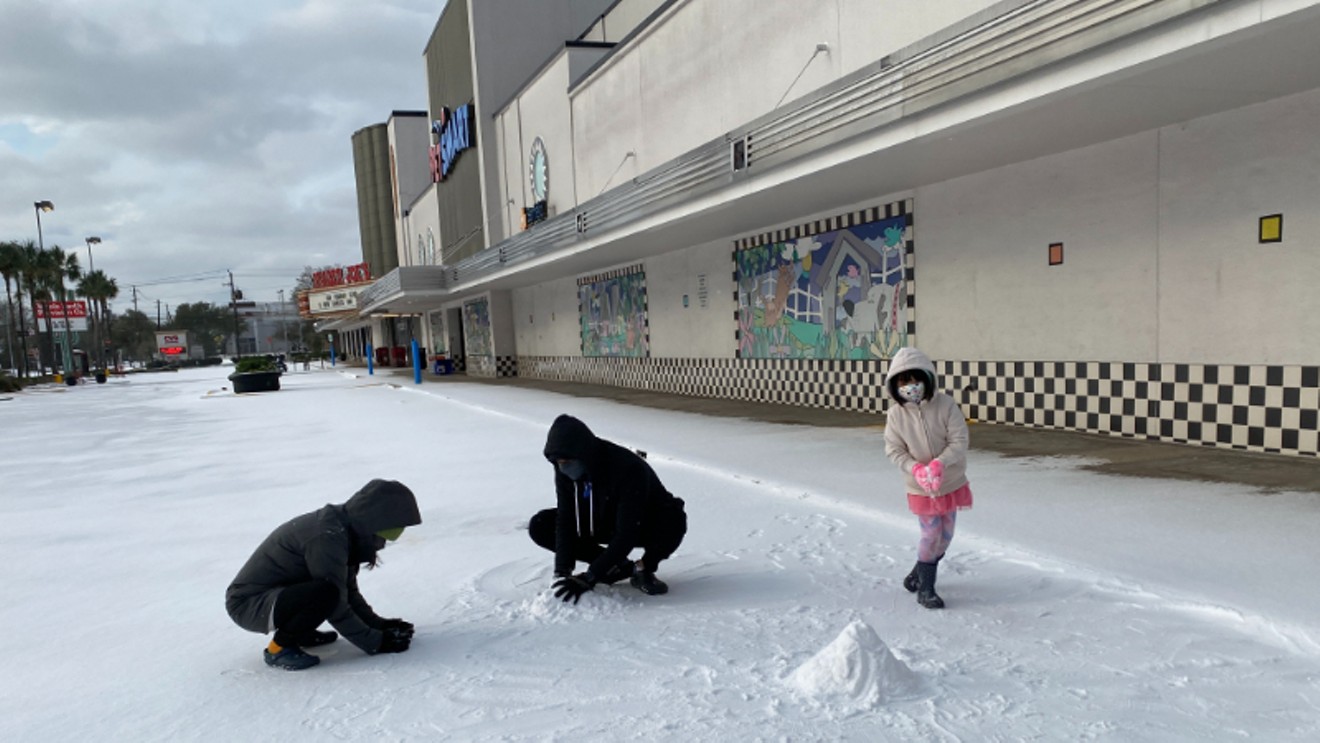 Having a little fun in the snow is the only silver lining to this miserable weather. Photo by Schaefer Edwards
As if the hellaciously frigid temperatures and icy, snow-covered roads weren’t cause for enough concern, thousands of Houston area residents woke up Monday without power during the worst winter onslaught our region has faced in over 30 years. At least a quarter of all CenterPoint energy customers had lost power Monday morning.

Temperatures stayed below freezing and kept falling overnight Sunday as ice, sleet and snow accumulated all across the Lone Star State. Ice has been reported on roads all across the greater Houston area, resulting in treacherous driving conditions and multiple accidents. Plenty of ice on Houston area roads according to TRANSTAR as of 10:50 a.m. Monday.
Screenshot
Houston Mayor Sylvester Turner and the Electric Reliability Council of Texas had both warned Sunday night that massive electricity demand from heaters across the state could lead to temporary “rolling outages” throughout Texas that might last for 15 minutes to an hour, but Turner tweeted Monday that as of 7:42 a.m. “about a quarter” of CenterPoint Energy customers were without power and that there’s no telling when service would be restored.

To make matters worse, CenterPoint's power outage tracker website went kaput Monday morning, making it even more difficult to put a finger on just how many people are stuck at home without heat or electricity. Before the site died completely, Harris County’s Office of Homeland Security & Emergency Management tweeted that the CenterPoint tracker's restoration estimates couldn't be trusted:

CenterPoint Outage Tracker restoration estimates are inaccurate. Due to technical issues, extreme cold and demand some generators are down statewide. Focus is on keeping grid from failure.

For now, stay indoors and layer clothing to keep warm.


CenterPoint addressed the situation via social media Monday morning with the ominous message that those who have lost power already might not get it back “for at least the rest of the day,” even though temperatures in Houston are set to plummet into the low teens tonight and won’t likely rise above freezing levels until at least Tuesday night, if we’re lucky.


Unfortunately, if you are a customer who is currently experiencing an outage, you should be prepared to be without power for at least the rest of the day. #houwx #hounews 5/10

For those without power, I know it is cold. The Mayor is in the same position but we will get through this together. st

Like many of you, I am in the 25% of all CenterPoint Customers without power this morning. I encourage everyone who can to practice #ElectricityConservation to do so.


Harris County’s Office of Homeland Security & Emergency Management confirmed that the hours-long outages many area residents reported Monday morning weren’t caused by rolling blackouts, and explained that there are downed power generators all across the state.

If power outage lasts more than an hour, it is not a rolling blackout. Generators are down across the state and operators are working on it - no timeline to restore yet.


Ace meteorologist Eric Berger of Space City Weather reported Monday that his League City home was without power as well, and said he was told ERCOT had to take multiple power plants offline due to the storm.

“This is unfortunate,” Berger wrote pointedly, “given that these conditions have been forecast to occur for almost a week now.”

Rice University cancelled all of its classes for the day on Monday morning after news of the widespread power outages spread, pivoting away from its plan to still offer virtual classes. The University of Houston also announced Monday morning that all university classes and activities are cancelled “through Tuesday” due to “power and operational outages associated with the winter storm.”

Fort Bend County Judge KP George was himself without power this morning.
Screenshot
In a morning update on conditions in Fort Bend County, George once again begged locals to stay home and leave the roads open for first responders and emergency workers, and asked folks not to be tempted to venture out by the winter wonderland outside.

“If you look outside it is beautiful, but don’t go out and get in a car...roads, which includes our major highways and side roads, are not passable.”

Fort Bend County Sheriff Eric Fagan was even more blunt in his assessment — “There’s no road that is safe in Fort Bend right now. None,” he said.

“And even if you don’t see snow, it’s even more dangerous,” Fagan continued, “because the cement is way slicker, and what they call black ice, you don’t see… if it’s not an emergency, please stay off the road.” 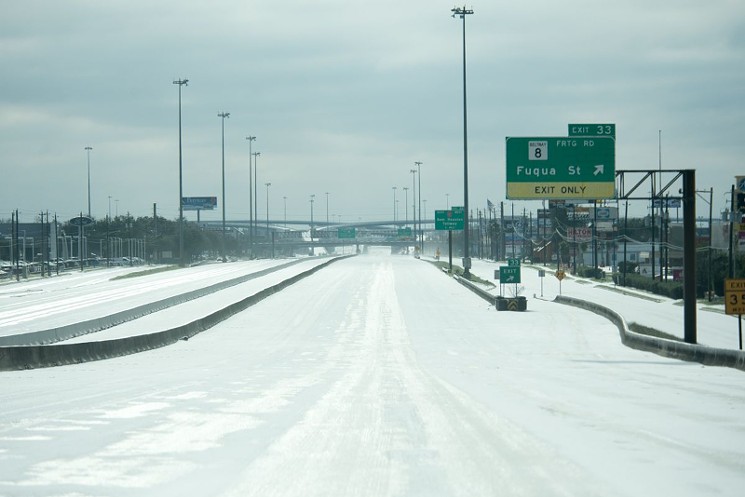 Just stay home, Houston.
Photo by Jack Gorman
KEEP THE HOUSTON PRESS FREE... Since we started the Houston Press, it has been defined as the free, independent voice of Houston, and we'd like to keep it that way. With local media under siege, it's more important than ever for us to rally support behind funding our local journalism. You can help by participating in our "I Support" program, allowing us to keep offering readers access to our incisive coverage of local news, food and culture with no paywalls.
Make a one-time donation today for as little as $1.