With Nasty Freeze On The Way, Hidalgo and Turner Urge Folks To Hunker Down and Stay Off the Roads

Harris County Judge Lina Hidalgo said locals should act like the coming winter storm was a cat 5 hurricane and to prepare accordingly. Screenshot
In a joint press conference Friday afternoon, Harris County Judge Lina Hidalgo and Houston Mayor Sylvester Turner stressed caution ahead of what’s likely to be the gnarliest bout of winter weather the Houston area has experienced in three decades.

Both officials begged folks in the greater Houston area to start preparing ASAP for the blast of Arctic air set to descend on our area this weekend that could bring freezing rain, sleet and snow starting Sunday night, as well as sub-freezing temperatures in the twenties and teens for at least 24 to 36 hours straight.

“What we’re about to see is not your typical annual hard freeze,” Hidalgo said. “This is a historic cold spell that has the potential of causing tremendous disruption to our region, and of being potentially deadly.” She cautioned that local roads could easily become impassable and that frozen rain could lead to falling tree branches and downed power lines across the area.

County meteorologist Jeff Lindner called the upcoming winter weather “a kind of double-header” between the potentially record-low temperatures we could see for multiple days straight in addition to all sorts of icy nastiness falling from the heavens at the same time. “It could be freezing rain. It could be sleet. It could even be snow. It could even be all three,” he said.


“Nobody wants to be responsible for sending people, for sending employees out into the streets in this kind of weather and then seeing a situation like what we saw in Dallas-Fort Worth… We need to leave the roads open for ambulances, that’s about it,” Hidalgo said.


Everyone assembled at Friday’s news conference stressed that local residents should act now to make sure they have everything needed to hunker down and stay home from Sunday evening through at least Tuesday morning. They’re hoping the stark warnings will prevent a highway horror-show like the one in Fort Worth Thursday, when more than 130 vehicles were involved in a horrendous accident on an iced-over Interstate 35. Six people died in the pileup.

Hidalgo urged local employers to do the responsible thing by telling their workers to just stay home until conditions improve.

“Nobody wants to be responsible for sending people, for sending employees out into the streets in this kind of weather and then seeing a situation like what we saw in Dallas-Fort Worth… We need to leave the roads open for ambulances, that’s about it,” Hidalgo said.

Turner agreed: “I’m asking people in the city of Houston as a whole to please stay off the road starting Sunday night through Tuesday, unless it is a dire, super-critical situation,” he said. Turner explained another way Houstonians can pitch in is by setting your thermostat a tad lower than you might’ve been planning on to reduce the burden on the region’s power grid.

“Instead of it being at 76, 78 [degrees], lower it a little bit, down to 72 for example for everyone, so we don’t overload the system,” Turner said.

CenterPoint Energy spokeswoman Alejandra Diaz said the electricity provider has already started preparing its local inclement weather plan. “In addition, we are planning to pause planned construction outages scheduled for Monday and Tuesday,” Diaz wrote in a statement to the Houston Press. “This means that if there’s a situation that might cause damage to the grid, we would isolate and disconnect service to a specific area while making necessary repairs.”

As a reminder that this potential crisis is on the way while there’s still a raging pandemic out there, Hidalgo and Turner announced that neither Harris County Public Health nor the Houston Health Department will be providing coronavirus tests or vaccinations from Sunday through Tuesday.

“We knew this weather was coming,” Hidalgo said, “so we front-loaded the vaccinations for those days today and yesterday. We simply didn’t make appointments for those days knowing that we were going to have weather.” 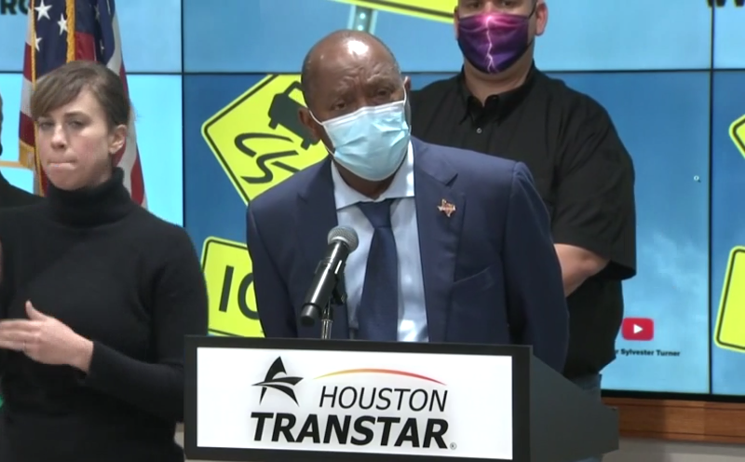 Houston Mayor Sylvester Turner said keeping your thermostat around 72 could help prevent widespread power outages.
Screenshot
Turner said that while the city health department scheduled fewer vaccination appointments for the start of next week than usual, it did still have “about 100 appointments” total on the books for Monday and Tuesday “that will be rescheduled.”

Later, Fort Bend County released a statement that all its COVID-19 testing and vaccination sites would be closed Monday and Tuesday and those with appointments for those days would be rescheduled.

All METRO public transportation services will be suspended Monday through Tuesday or until conditions improve, Turner said. In the meantime, METRO staff along with Yellow Cab Houston will be working to get the local homeless population into area shelters, including a warming shelter the city is setting up at George R. Brown Convention Center that’ll open Sunday at 2 p.m. Hidalgo said county staff will also be out visiting local homeless camps to distribute jackets and blankets, and that additional county-operated warming shelters will be announced in the days ahead.

Houston Independent School District — which was set to be open for business Monday despite the Presidents Day holiday — announced Friday afternoon that it will close all of its campuses and offices Monday and Tuesday. "Due to the threat of inclement weather and out of an abundance of caution, there will be no virtual or in-person learning. Employees will not report to work," read a statement from the district's press office.

Harris County District Clerk Marilyn Burgess said earlier Friday that the local district courts typically follow HISD’s lead on closures. “We are looking and anticipating we will probably be closed on Monday and most likely Tuesday as well,” Burgess said. The county district court offices — which have already shifted to only allowing visitors with appointments thanks to the pandemic — have already rescheduled all appointments set for Monday and Tuesday ahead of time. City municipal courts will be closed Monday and Tuesday.

In a statement sent to the Press, Houston Airport System spokesman Augusto Bernal said that while Hobby and George Bush International Airports will remain open, people with flights scheduled during the next several days should “please check with their airline for updates, delays or cancellations before going to the airport.”

“Passenger safety is our top priority,” Bernal wrote, “so if the weather conditions result in a significant accumulation of ice, snow or sludge, for a prolonged time on the runways, the airports might have to declare a ground stop; meaning no take offs or landings will be possible.”

City Fire Chief Sam Peña warned residents not to leave space heaters unattended, and not to use barbecue grills, ovens or stoves as indoor heat sources due to the fire hazards and the risk of deadly carbon monoxide poisoning.

Hidalgo urged locals to prep for this coming storm the same way they would for a particularly hairy hurricane.

“I just want to make sure that everybody knows that if the models are right,” Hidalgo said, “we’re about to see an incident the likes of which we have not seen in 30 years: a very high probability of power outages, dangerous conditions outside [and] road closures.”

“The same type of thing we would see in a category 5 hurricane,” she said.
KEEP THE HOUSTON PRESS FREE... Since we started the Houston Press, it has been defined as the free, independent voice of Houston, and we'd like to keep it that way. With local media under siege, it's more important than ever for us to rally support behind funding our local journalism. You can help by participating in our "I Support" program, allowing us to keep offering readers access to our incisive coverage of local news, food and culture with no paywalls.
Make a one-time donation today for as little as $1.