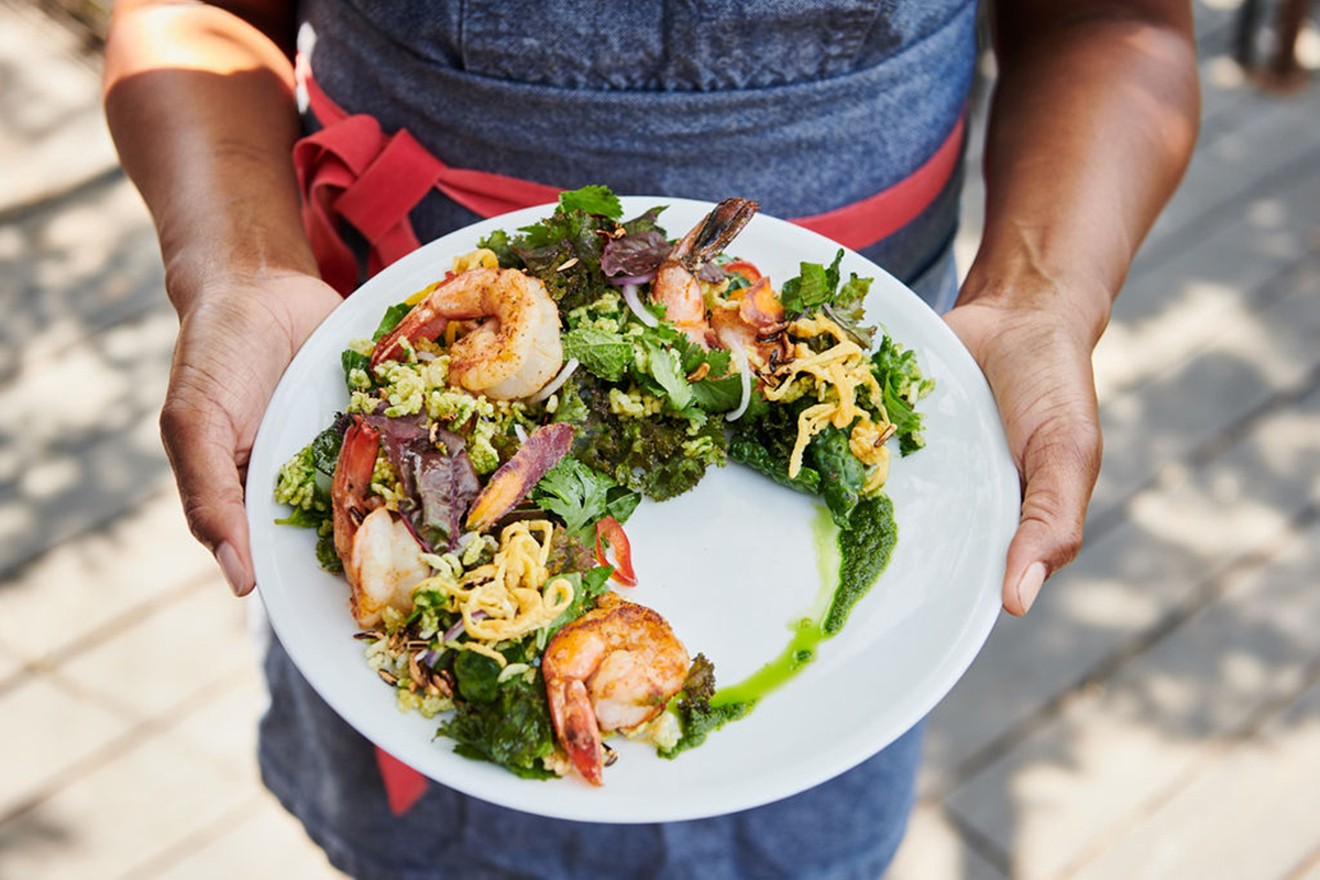 Chef Dawn Burrell's "Pivot" experiences combine a meal delivery service with informative online cooking classes. Photo by Amy Scott.
Welcome to the fifth part of a series where we showcase the noteworthy food and drink experiences of a very weird year. In the spirit of the holidays, it's also a very special collaboration between the food writers of the Houston Press and Houston Food Finder, the online publication founded by former Houston Press restaurant critic and food editor Phaedra Cook. This fifth edition showcases chefs who made the best of a bad year. Part six will cover coffee. In case you missed it, here's Part 4: Beer. See the list at the end of this article for other installments of the series. 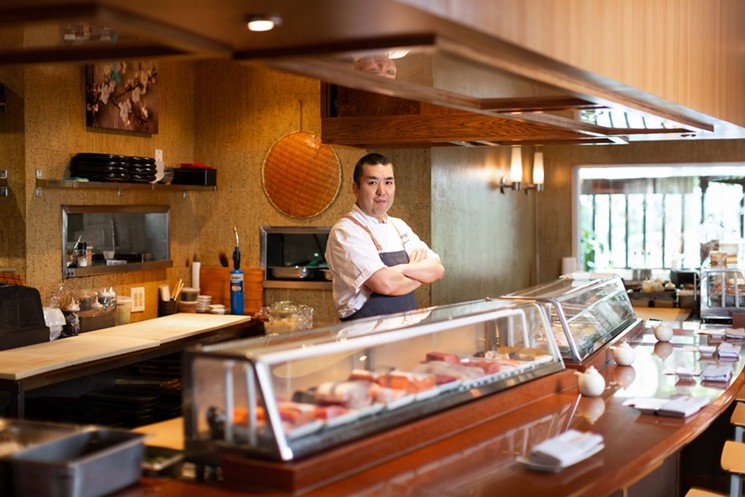 Chef Manabu Horiuchi at Kata Robata.
Photo by Julie Soefer.
Unlike past years, when we had the chance to visit and revisit restaurants throughout the year, 2020 has been a year filled with takeout, the occasional socially distanced dine-in experience and plenty of home cooking. The chefs that are honored here, the ones we recognize as this year’s favorites, are just a few that showed resilience despite the hardship, forging forward with efforts to innovate even as they just struggled to survive. Hats off to you, and thank you for the positivity you bring to the Houston food community.

Manabu Horiuchi, Kata Robata, 3600 Kirby: When a beloved restaurant closes, even on a temporary basis, there’s an acute sense of loss. Such was the case when, after months of just takeout service and a brief period of re-opening, Kata Robata shut down for several weeks during June and July. But it’s a testament to chef Manabu Horiuchi’s commitment to his staff and his customers that he offered full transparency and took his time to reopen. Instead of offering a pared down menu to make operations easier — he doesn’t take any shortcuts — he developed new dishes just as he would as in pre-COVID times. His new spicy Lobster and Crab Ramen, for instance, is simmered for seven hours to achieve a deep level of richness. His takeout sushi, likewise, is a thing to marvel at — the quality approximating the dine-in experience so closely that if you close our eyes and imagine, for a moment, it’s like sitting at the sushi bar. — Mai Pham, contributing writer, Houston Press

Vanarin Kuch, Koffeteria, 1110 Hutchins: In late 2019, Vanarin Kuch, formerly of Tiny Boxwoods and a prior competitor on "Top Chef: Just Desserts," opened his East-side pastry shop and café Koffeteria and introduced Houston to baked goods and pastries that strike a fine balance between genius and insanity. Some examples include the Beef Pho Kolache, Hot Cheetos Croissant and an ever-changing variety of savory danishes, including Asparagus and Gouda and French Onion. Some of his other don't-miss creations are the Pistachio Baklava Croissant and the Snickerdoodle Salted Egg Yolk Danish. On the drink side, the Salty Cambodian — a unique latte that gains richness from housemade sourdough butter, sweetness from condensed milk and is finished with a sprinkle of Maldon salt — is worth many return visits. The pastry world is filled with repetition, but at Kuch's shop, innovation is king. — Ryan Kasey Baker, contributing writer, Houston Food Finder

Ryan Lachaine, Riel Restaurant, 1927 Fairview: Within a week of Houston’s city-wide shutdown in March, Ryan Lachaine, in partnership with the The LEE Initiative and Maker’s Mark, launched the Restaurant Workers Relief Program to feed out-of-work and furloughed hospitality workers. For the duration of the program, Lachaine and his team prepared 300 free to-go meals daily, as well as supplying essentials like toilet paper and hand sanitizer. To keep his restaurant afloat and to fulfill the demand for more budget-friendly, takeout meals, Lachaine launched Louie’s, a takeout-only, virtual gourmet sandwich shop, operated from Riel. In between all that, he also managed to pick up an executive chef position at Commons Club at Virgin Hotels Nashville, while re-opening Riel for socially distanced dine-in. The fact that he’ll take a bone marrow whiskey luge shot alongside guests just adds to his lovability. — Mai Pham, contributing writer, Houston Press

Jas Phan, Migo Saigon Street Food, 9393 Bellaire: When COVID-19 struck, Jas Phan resisted offering his namesake Migo noodles to-go, insisting that he wouldn’t be able to guarantee the quality of his food if it wasn’t prepared in-house. But as COVID-19 wore on and it became clear that offering takeout and delivery was what he needed to do to survive, he relented — after doing extensive testing to ensure that the at-home dining experience would be as good as dining in. His insistence on quality and the fact that he can deliver consistently delicious noodles no matter the circumstances is something to be lauded. That he’s still honing his craft, perfecting dishes such mi vit tiem (braised duck noodle) or mi bo kho (Vietnamese beef stew with noodles), is a sign of things to come. We’re excited to be along for the ride. — Mai Pham, contributing writer, Houston Press

Jason Vaughan, Nancy's Hustle, 2704 Polk: The year started off strong for Jason Vaughan when he was named a semi-finalist for the James Beard Award's newly minted Best Chef: Texas category. Really, it was just a continuation of the numerous accolades that he has stacked up since the restaurant opened in 2018. Still, this year has been difficult for every restaurant, acclaimed or not. Nancy's Hustle completely closed more than once — first, during the dining room shut-down from March 16 to May 19, then again from September 13 to 22 so that the staff could "rest and regroup." In the background, Vaughan and co-owner Sean Jensen were working on new innovations and services, including a small, but well organized to-go system featuring three options including the Thicc Nancy’s cheeseburger combo. They added a groceries-and-goods section referred to as the Apocalyptic Bodega and rotating take-home dinner kits. Perhaps most significantly: Vaughan perfected his pizza game for a new restaurant Tiny Champions, which just opened its doors last week. — Ryan Kasey Baker, contributing writer, Houston Food Finder 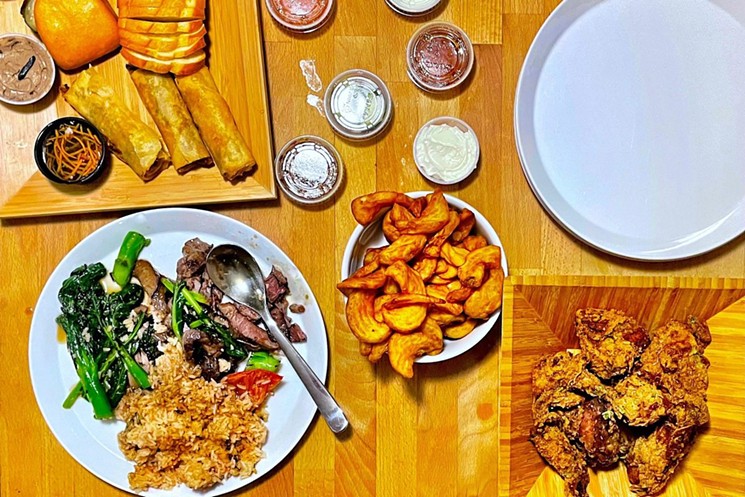 A spread of takeout food from Xin Chao.
Photo by David Leftwich.

Mark Clayton and Drew Gimma, Squable, 632 West 19th: When dining rooms were forced to close in March, this team quickly pivoted to curbside-only and added an online ordering platform. With hardly a misstep, well-executed dishes from a pared-down menu and paired with discounted wines were being delivered to your car window like an upscale version of Mel's Drive-In from the movie "American Graffiti." (All that was missing were the roller skates.) In addition, customers could order a few pantry staples, such as cultured butter and pasta. Once dining rooms were allowed to reopen, Gimma and Clayton continued to add new creative dishes featuring local produce and meat and even started Burger Tuesday, which showcased innovative versions such as the Lil' Ma, Clayton's take on a certain fast-food classic. Being named Best New Restaurant in a normal year is quite a feat. Maintaining that level of quality during a pandemic is almost impossible, yet Clayton and Gimma, along with with rest of the Squable team, managed to do it.

Christine Ha and Tony Nguyen, Xin Chao, 2310 Decatur: Opening a new restaurant with a new business partner during the COVID-19 crisis is like building a boat in a hurricane. However, Ha of The Blind Goat and Nguyen of Saigon House not only opened Xin Chao, but managed to create an eatery serving memorable and impressive dishes. Taking over the location that once housed Beaver’s and Decatur Bar & Pop-Up Factory, the team created a sleek modern space with an ample patio — something that is much needed right now. Some of the best dishes on a menu featuring modern Vietnamese include Nguyen-er Nguyen-er Chicken Dinner — crispy lemongrass buttermilk fried chicken — and the eggrolls, a melding of the recipes from both Ha's and Nguyen's moms. Quite frankly, Xin Chao served one of the best takeout meals I had all year. — David Leftwich, associate editor, Houston Food Finder

Dawn Burrell: On February 26, Dawn Burrell was named a James Beard Award semifinalist for Best Chef: Texas for her work as executive chef at Kulture. Only 19 days later, the downtown restaurant was closed due to the pandemic. It has yet to reopen. However, Burrell, a former Olympic athlete, hasn't allowed that to deter her. Working with I'll Have Have What's She's Having, a local nonprofit led by women in the Houston hospitality business that focuses attention on women's health, she help launched Pivot. Showcasing global comfort food, Pivot combines a meal delivery service with informative online cooking classes. Recent menus have explored West African cuisine while others have featured dishes such as Crawfish Cornbread and Glazed Japanese Yams. In July, Burrell officially left her position at Kulture to focus on Pivot and caring for her family, especially her mother and stepfather. — David Leftwich, associate editor, Houston Food Finder 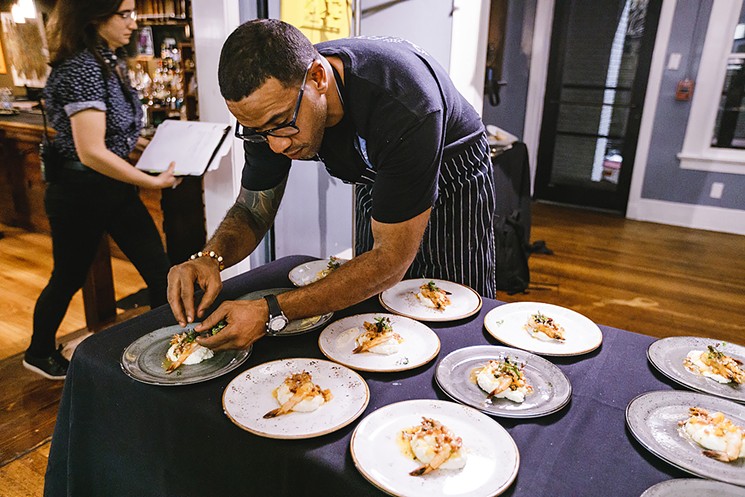 Chris Williams, executive chef of Lucille's.
Photo by David Wright.
Lucille's, 5512 La Branch: This year, the James Beard Foundation honored chef Chris Williams and his Museum District restaurant by showcasing his work at a "Taste America" virtual dinner night, which featured dishes such as gumbo z’herbes. We're not sure where the time has gone, but Williams has been serving his beautifully plated southern comfort food at Lucille's — including his grandmother's famous chili biscuits — for eight years. Though the honor was long overdue, in a year when food and drink gatekeepers from Bon Appétit to the Beard foundation itself have come under increased scrutiny for lack of diversity, it was a step in the right direction. Admittedly, the Beard Foundation still has a lot of work to do when it comes to fixing these systemic problems. However, providing opportunities in addition to the (usually annual) James Beard Awards allows a wider range of food and bar professions shine, and it is a step in the right direction. — Phaedra Cook, editor and publisher, Houston Food Finder

The Other Favorite Houston Food & Drink Experiences of 2020