Cooking In The Booth And The Kitchen: Bun B's Trill Burgers Continues To Gain Fans 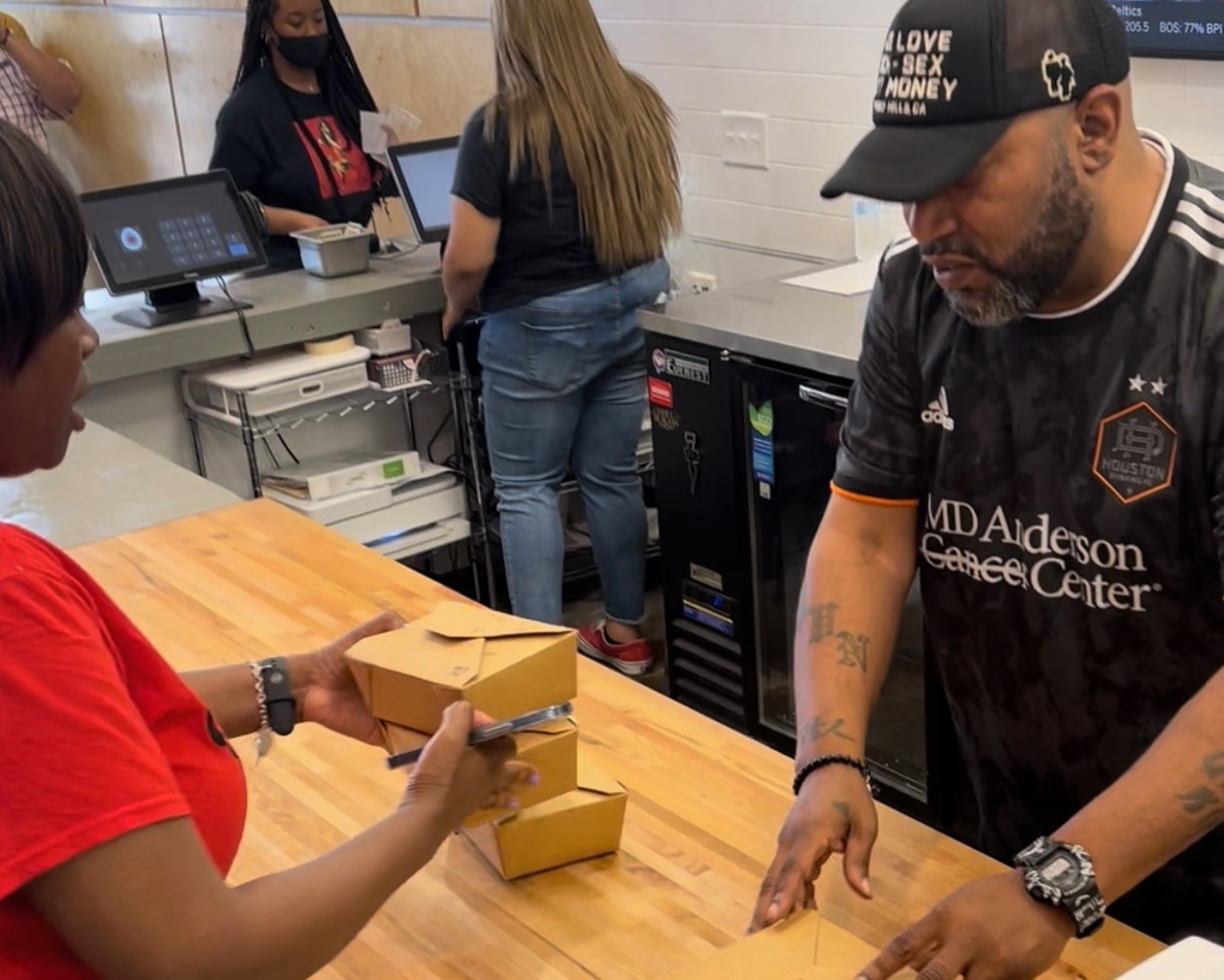 Bun B serves customers at a pop up. Photo By DeVaughn Douglas

Correction 3 p.m.: Patsy Vivares and Benson Vivares are no longer associated with Trill Burgers and publicist Nick Scurfield should have been listed as one of the originators of the venture.

Sitting on the corner of Edwards Street and Sawyer in a warehouse shopping complex is Sticky’s Chicken. The restaurant specializes in fried chicken, offering wings, fried chicken over rice, chicken sandwiches, sliders, and shareable plates. But on an exceptionally warm day earlier this summer the restaurant was preparing for something other than their usual fare.

Early in the morning, a line began to form in front of Stickys, with patrons peering into the windows of the chicken spot to see if they could catch a glimpse of anyone. Inside workers bustled around, with one stopping to walk up to the doors and assure awaiting customers that they would be open on time. Sitting at the front of the line at 11 a.m. was Virgil Gentry. He had woken up early just to make sure he was on time.

“Today is my birthday. I’m a lifelong fan of Bun B, I’ve never met him, and I’ve never had a Trill Burger,” explained Gentry as more and more people began to get in line. “I figure today is the day I can do both. Today I’m getting a Trill Burger.”

Trill Burgers is the brainchild of Bun B, Andy Nguyen, Patsy Vivares and Benson Vivares. and Nick Scurfield.  Nguyen has made a name for himself creating restaurants in California like Matte Black Coffee, Dough & Arrow, Banh Xeo Boys, Portside Fish Co., and more. Patsy and Benson have built a name for themselves here in Houston with Sticky’s Chicken as well as its breakfast offshoot, Scrmbld.

The face of the Trill Burgers brand is legendary MC Bun B, who is now adding restaurateur to his lengthy resume. This year alone he's dropped Mo Trill, an album with Cory Mo; assisted Mickey Woods and Todd on their latest release, Golden Triangle; continued to teach at Rice University; continued to helm a show on Sirius XM titled the 2 Trill Show; sold out NRG stadium for his night at the rodeo, remained on the board of directors of the Houston Cinema Arts Society, and just generally repped Port Author and Houston wherever he goes.  What began as Bun B’s appreciation for good food has turned into a burger that is sought out all over the nation.

“We started out as a food truck and Mr. Foodie over here found us,” laughs Patsy Vivares as she points over at Bun B. “If we were at an event and Bun was there, he would stop by our truck. That’s how we got to know him.”

Bun was already friends with Nguyen who had built a name for himself creating viral food offerings in California and was in the process of doing the same for Sticky’s. He approached Bun with a smashburger concept with Patsy and Benson as the chefs.  With that suggestion the seeds for a new food offering began to sprout.

“I already knew what they could do in the culinary world so them being involved was a huge selling point,” remembers Bun. “They brought me the original concept and it was a really good burger. Then they went and worked on it some more to lock in the flavors and came back with what the world now knows as a Trill Burger.”

Up to this point Trill Burgers does not have a brick and mortar but they are gaining attention due to their various pop ups. The restaurant has served burgers at Travis Scott’s Astroworld, LL Cool J’s Rock The Bells Festival, the Texas Livestock Show and Rodeo, Coachella, and more. The time and care put into the burger is paying off with the brand receiving praise online as more people get a chance to sample it at pop ups.
The praise is not just coming from Bun and people that have been fortunate enough to catch a pop up. Toward the end of July, Bun B and his Trill Burger won Good Morning America's “United State of Burgers Competition" where the Trill OG faced off against other burger offerings from Atlanta, Miami and Philadelphia. The competition, held in Times Square in New York, netted Trill Burgers a $10,000 cash prize and validation that the burger that they have is not just a celebrity gimmick. All of it is leading to Trill Burgers finally getting a brick-and-mortar location.

The focus on food being done right consistently as a pop up could be looked at by some as a big task, but for Bun B, who’s used to touring across the globe,  it almost seems like second nature. As soon as the doors open Bun is taking orders and managing the front of house. It is Bun’s belief that the flavor will win over any customer because it’s what got him.

“I not going to name the place, but I tried a burger the other day,” he says. “It was the first time I tried a burger that wasn’t a Trill Burger in a long time. It just wasn’t the same. I had to ask myself why I was even trying this when I’ve got my own burger. There’s a special thing happening in that kitchen and the people recognize it. They passed up countless burger places to get here so if they wanted a burger, they could have gotten one. But if you want a Trill Burger there is only one place.”

So Trill Burgers gets the stamp of approval from Bun B, Good Morning America, and people attending multiple pop ups.  Looking online it has been endorsed by Jadakiss, Fat Joe, Slink Johnson, Jae' Sean Tate, Soulja Boy and more.  But there are some out there that probably think it’s all celebrity hype. The first person in line at the Sticky’s chicken pop up, Virgil Gentry, was prepared to meet one of his favorite rappers as well as try one of the burgers.  He also gave the warning that if it wasn’t good he’d speak his mind. Sitting in a booth with his wife and son as they picked at a few of the fries left from the meal he was ready to give his full critique.


“The meat was seasoned. The bun was buttered. For lack of a better term…that was a good ass burger."

“No bias at all. Not showing him any favor at all,” exhaled Gentry as he wiped his mouth with a napkin and looked at the line increasing in size outside. “The meat was seasoned. The bun was buttered. For lack of a better term…that was a good ass burger. My only problem is I should have ordered two.”

He and other Houstonians can get the chance as more pop ups have been announced. Sunday, August 14 Trill Burgers were available at 8th Wonder Brewery, which already offers Bun B’s Trillionaire Watermelon Herbal Seltzer. Over 500 pounds of beef provided by Cameron, TX group, 44 Farms, was served to hundreds of people who descended on the EADO brewery.  Even Funnyleonidas, the credit repair specialist made popular on TikTok, came out and purchased 500 burgers for those waiting in line.  For Bun there is even more to come, as he jumped on Instagram to let fans know what was coming in the future.

"We served thousands of burgers," exclaimed an exhausted Bun B as he stepped away from the line.  Dressed simply in a black Trill Burgers T-shirt and hat with matching Sneaker Summit shorts he continued. "It took a long time but we made it happen.  This was a big test for us and we made it happen but we want to excel.  In two weeks we will excel.  We will sell more burgers, serve more people, and show more love to Houston as we always do."

On Sunday, August 28 Houston will be celebrating Bun B Day with a Trill Burgers pop up in front of city hall. If the last few pop ups are any indication, get there early because everyone is going to try and get a taste.
KEEP THE HOUSTON PRESS FREE... Since we started the Houston Press, it has been defined as the free, independent voice of Houston, and we'd like to keep it that way. With local media under siege, it's more important than ever for us to rally support behind funding our local journalism. You can help by participating in our "I Support" program, allowing us to keep offering readers access to our incisive coverage of local news, food and culture with no paywalls.
Make a one-time donation today for as little as $1.