Waiter is thoughtful about menu changes. Photo by: Kate McLean

Six years ago, you could have pointed out Austin Waiter from the bleachers of a Merrimack University lacrosse game. Fast forward and you’re more likely to spot him orchestrating dinner service through the massive window into the kitchen at Tony’s restaurant, 3755 Richmond. At the age of “the big 25” as he calls it, he’s running one of the most timeless fine dining destinations this country has to offer.

Waiter is a hungry, world explorer. At Tony’s not only can you find the dreamlike seasonal truffle pasta, but a delightful tasting menu with deft attention from the chef and staff. He has, and hopes to visit all the best restaurants in the world and it’s clear in his creations that he has learned greatly from them.

The Houston Press sat down to interview Waiter, outside, on a chill, sunny Houston day, they both drank espressos. It’s apparent that Tony Vallone had already begun to rub off on him…

HP: How did you become a cat guy?

AW: Dogs took way too much time, and I’m always at the restaurant so a cat was just way easier.

HP: What did you name your cat?

AW: When I got her, I went to Chipotle for lunch that day. I named her Purrito, after the burrito I had just eaten.

HP: Where are you originally from?

AW: I was born in Ohio, but grew up in Westport, Connecticut. It’s about an hour outside of New York City, so I went there a lot.

HP: Why Houston? How did you get here?

AW: I chose Houston because in school [The Culinary Institute of America at Hyde Park] we had to choose an internship and everyone kind of went to New York or Chicago. I decided to go a different route. Houston is up-and-coming in the food scene and I saw my chance to get there [Tony’s]. I loved Tony’s so much, I came back [after graduating] and have been here ever since. I planned on being here just a year, but I’ve been here about four years now.

HP: How did you get into food?

AW: I originally went to school to play lacrosse and then I took a year off, worked at a catering company to pass time and fell in love with it. I went to school [Culinary Institute of America at Hyde Park] and that’s my thing now, food.

HP: At the catering company, was there one job in particular that you loved?

AW: I think the creative [aspect], making plates pieces of art, making it look good. The catering company I worked for was really high volume, so it taught me work ethic. But also [plating] making it look good no matter what was very important.

HP: Talk to me about your tasting menu, what excites you?

AW: Right now, I think we are in a season of cool ingredients, but you have to be a little bit more creative because things aren’t as fresh. Things like, Texas citrus, like what I’m doing on the caviar dish. Also, the porcelet I’m really excited about, it’s a milk-fed pork from Canada. [We are] doing that with chanterelles. We used to get the loin, and rib and belly all together, but I fought them for like two months to only get the small little four-pound racks with eight bones on them that comes with the skin. It’s really good. 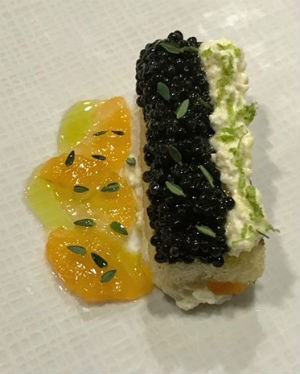 AW: I’m really into curing. I want to start curing and fermenting [more.] Right now, I’m working on a foie dish with hoshigaki, so that’s dried persimmon, they have been hanging in my office for about two months now. So, you hang them up and basically massage them every week. They dry and slowly the sugars come out to the exteriors of the fruit. It kind of has a fermented persimmon taste to it.

HP: Is anyone other than you allowed to massage them?

AW: Uhh, no. I solely massage them, once a week, every Tuesday.


HP: What is your favorite season?

AW: I’d say fall is my favorite season. There is a lot in season food wise and I like the changing of the season. It’s not overly hot, but especially up north where I grew up, all the leaves start to change.

HP: What’s the best dinner experience you’ve ever had?

AW: That’s hard. [pauses]. That’s a tough one. I think Alinea. Not only was their service impeccable but their food really outshined their service, which is a really hard thing to do. It was just a really fun trip. I flew up, ate dinner, flew back.

HP: What’s it like to work with a legend?

AW: It’s crazy he’s [Tony Vallone] got more energy than most of the younger staff in the building. Even me. You have to continuously take notes and stay on your game every day because he always wants to push forward. Which is really great. There is not a day where you can chill. It’s always, what’s next? What can you get in on the menu? What can we improve on? You learn so much every day working with him.

HP: How has he pushed you to become better?

AW: He demands consistency, which I think is the most important thing in the kitchen. So, if anything is not consistent, or something is changing throughout the process of creating and putting something on the menu he will find it and that pushes me to make sure it’s perfect. Of course, he does find stuff wrong every once-in-a-while and that’s when you go back to the drawing board and fix it.

HP: What were you for Halloween last year?

AW: I was Elsa from Frozen.

AW: We lost a bet on who was going to die first on Game of Thrones. All our [guy] friends had to dress up as Disney princesses.

AW: Pretty much all my vacations are food trips, so I kind of like plot where I want to eat. I like to book it really fast and go. I don’t like waiting. I like making last minute trips anywhere I possibly can.

HP: What’s on your radar next?

HP: You are a twin, is your brother into cooking too?

AW: (smiles) No, he cooks mac and cheese out of the box. That’s the extent of his cooking but he’s slowly learning (laughs.)

HP: Tell me about the T-shirts you help design…

AW: I help with this T-shirt company called Feed Me Apparel. Just on the idea side, but Shannon Smith takes over the development and getting them to print. You can find them on Etsy and Instagram, @feedmeapparel. I think one day they will take off, we are still in the beginning stages.

HP: What favorite misspelled kitchen labels have you come across?

HP: Which app on your phone are you addicted too?

AW: Right now, I’m either addicted to Instagram or the activity on my Apple Watch. I’m really into competing with Scott Sulma for how many steps we’ve had and also at events with event coordinators, how far we’ve gone. Who has moved the most.

HP: Are you winning?

HP: Who is Leila?

AW: She is our event coordinator for our catering department.

HP: You have two minutes left to buy beer, which case do you grab?

HP: If there were a Houston chef calendar, which month would you be, and why?

AW: I’d like to be March. It’s the turning point from winter to spring and it’s my birthday month. I’d definitely be March.