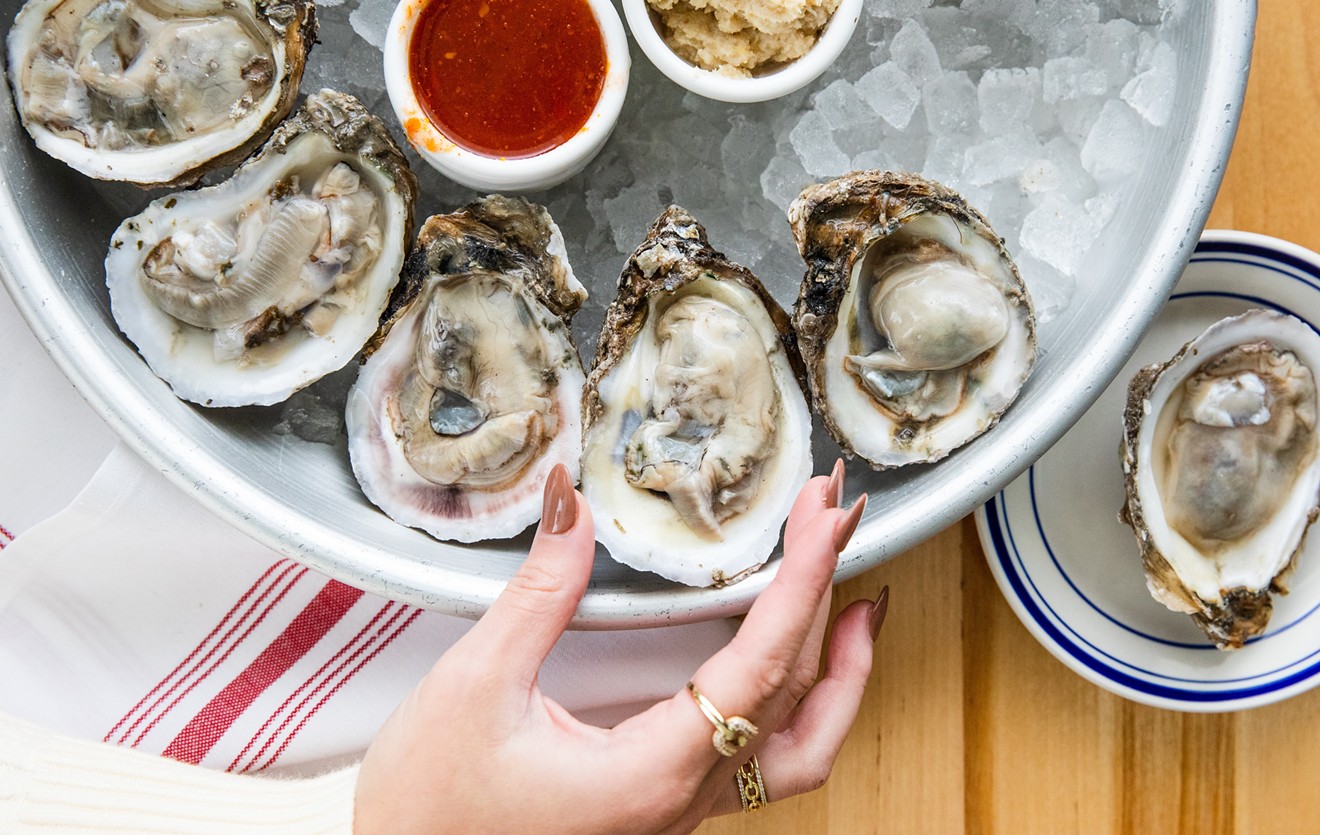 Oysters on the half shell are on d'Alba's happy hour menu. Photo by Becca Wright


d'Alba, 3304 Milam, announced its opening December 23 in a press release. Originally expected to open in mid-November of this year, the second location of the craft kitchen and cocktails concept encountered the usual delays and challenges while turning the space, which formerly housed a sports bar, into a modern and chic full-service restaurant. On the plus side, the new restaurant already had its menu and operating systems in place. Like its original location in Garden Oaks/Oak Forest, the new d'Alba has the same established recipes and large cocktail program to serve an area with high residential density. D'Alba's campechana has blue crab and shrimp.
Photo by Becca Wright
Guests will find its popular Balloon Bread, a freshly baked pita from a wood oven fire that gets topped with basil-garlic pesto and a drizzle of truffle honey. Other shareables include cannellini bean hummus with vegetable crudite and flat bread, blue crab and shrimp campechana and spinach and artichoke dip. There are charcuterie boards, raw oysters, wood-fired pizzas and a variety of green salads. Diners will also find a selection of pastas and a Big Plates section with Blackened Salmon, Confit Chicken Thighs and the Falcon Lake Farms Burger. The full bar at d'Alba means a wide selection of cocktails.
Photo by Becca Wright
The menu of cocktails includes gin-based drinks such as Corpse Reviver No.2 and the Butterfly G&T and a variety of tequila and mezcal concoctions. Other signature cocktails include the California Gold Rush made with Buffalo Trace bourbon and the Peach Agua Fresca, a refreshing rum beverage.

The new Midtown location has a happy hour like its predecessor Monday through Friday from 2 p.m. to 5 p.m. with specials on raw oysters and $5 drinks like the Alba Red Mule and a selection of several bubbles. It will celebrate its grand opening with its first weekend brunch January 1, 2023. 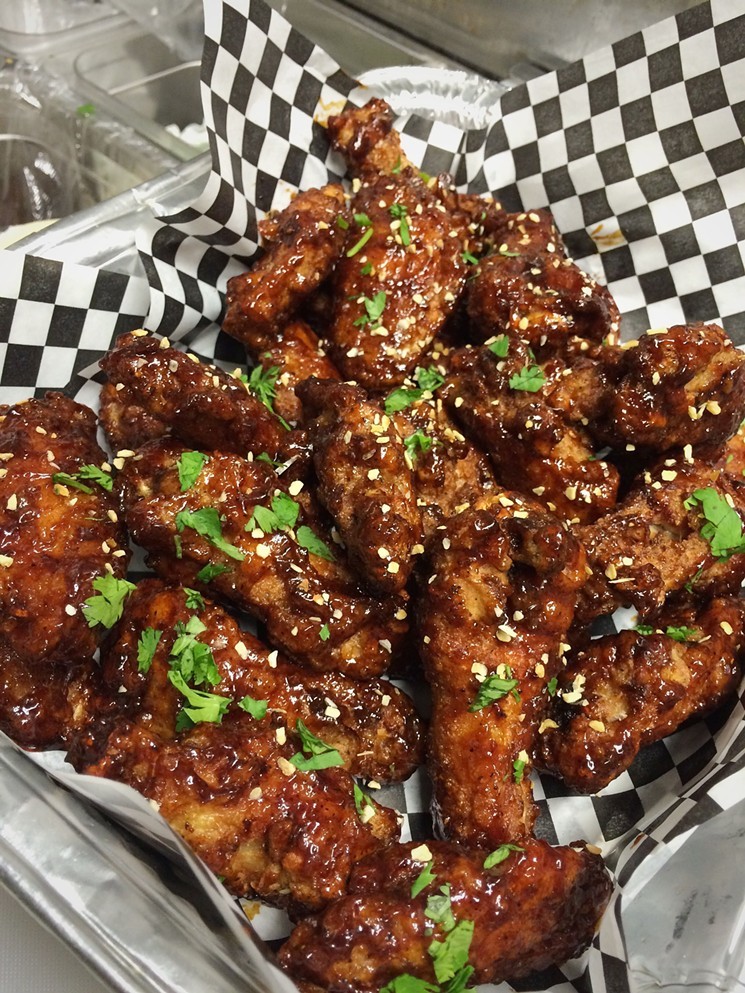 Unfortunately, these sticky wings aren't sticking to Sawyer Yards.
Photo by Benson Vivares
Sticky's Chicken, 2313 Edwards, closed December 21 as announced on its social media and reported by CultureMap Houston. Its Facebook post read, "The yoke just broke. Biggest and sincerest thank you to all those who have supported us through the years. It was a long and fun run. We love you Houston."

The wings concept from siblings Patsy and Benson Vivares first began as a food truck in 2014, positioned outside McIntyre's Downtown before opening its brick and mortar at Sawyer Yards in late 2019 with help from Andy Nguyen, chef Michael Pham and Tuan Bui, as we reported here in the Houston Press.

Its signature "sticky" sauce was a family recipe from Ceferino Vivares, the siblings' father. The sauce made its way onto many menu items including wings, sliders and its popular Chicken Over Rice. The Vivares siblings also hosted pop-ups for Bun B's Trill Burgers but are no longer affiliated with the smashburger concept. Local Table will open early in the New Year.
Photo by Jenn Duncan
Local Table, 24033 Cinco Ranch Boulevard, is slated to open January 2023 as the brand's flagship restaurant. It will be the biggest location with 14,500 square feet of space. The Katy restaurant will also feature a massive patio and offer a private room that will accommodate 60 people. It will be the fourth location for the locally-owned eatery with a fifth restaurant planned for The Woodlands at 4223 Research Forest in March 2023. Barrel of Monkeys Hospitality is actually a trio of Jessie Gonzales, Lainey Collum and Steven Ripley.
Photo by Kirsten Gillliam
Monkey's Tail, 2017 N. Frazier, has a tentative opening date of March 2023 but the opening of its second location is still a work in progress. When the Conroe spot opens, it will have the same menu as the original Monkey's Tail in Lindale Park, which is operated by Barrel of Monkeys Hospitality. Tacos will be authentic and handmade at Grease Monkey.
Photo by Kirsten Gilliam
Grease Monkey, 985 Wakefield, is currently under construction at the former Petrol Station and should open later in 2023. It's the second concept from Barrel of Monkeys Hospitality.  It will serve handmade Mexican tacos on fresh tortillas and have a beverage program centered around tequila and mezcal. There will also be a craft beer wall, rotating seasonal drinks and a small, curated list of natural wines under $60. Its "Free-Spirited" menu will offer a variety of non-alcoholic mocktails. Live music and delicious steaks will both be served at ROCKHOUSE.
Photo by Brandon Holmes
ROCKHOUSE Southern Kitchen, 6025 Richmond, is expected to open in February 2023. Located in the long ago home of the famous blues venue, Billy Blues, the 14,000 square foot space is currently being transformed from Diablo Loco sports bar into a Southern-inspired restaurant and live music venue. The new concept comes from the team that opened The Warwick this past April. Joe's Italian will replace Yanni's Greek.
Photo by Lorretta Ruggiero
Joe's Italian Restaurant and Pizza, 13203 Jones, will take the place of Yanni's Greek Taverna which closed this past July. We are searching for contact information in order to get more details. For now, the interior is still under renovations.

The Baker's Son by Valerio's, 8025 Main, softly opened December 1. The Filipino bakery is the second for the concept, which opened its first in Jacksonville, Florida in 2021. The concept comes from Jun and Kathleen Valerio. Jun Valerio's family owns and operates more than 30 bakeries on the West Coast and Jun grew up working in the bakeries and eventually managing a number of locations.

The offerings at the shop are too many to list but devotees of Filipino pastries will find a variety of ensaymadas, puto, and pianono, Filipino sponge cake rolls. There are meat-stuffed breads such as Adobo Pan de Sal, Ham and Cheese Buns and Chicken Asado. The bakery also offers a number of treats made with ube, the purple yam that finds its way into many Filipino desserts and pastries, giving them a distinctive hue.

Tulum HTX Bar & Restaurant, 903 Hutchins, opened softly in late October and is now ready to celebrate the New Year with a free New Year's Eve party December 31, 2022 from 8 p.m. to 2 a.m. at its exotic Mexico-themed venue.

Attendees 21 and up can enjoy the free buffet while dancing into the New Year with music from DJ OGIB. For its Free Countdown to 2023 Celebration, there will be appearances by FOX 26 television personalities Carolina Sanchez of 'The Nightcap' and Isiah Carey of 'The Factor Uncensored' as they host a live broadcast. The multi-level venue is also offering partygoers a complimentary champagne toast at midnight.

In keeping with its Mexican coastal theme, the buffet will fuel guests with a wide selection of nachos with toppings like bbq pork belly, chicken mole, oxtail and chicken tinga. There will be quesadillas and a variety of wings. Drink specials include $5 Vegas Bombs, $5 Patron tequila and $7 Skittles Shots. For larger groups, there are bottle specials such as Ciroc Ultra Premium vodka ($125), Crown Royal Canadian Whisky ($200) and Champagne ($50). The restaurant also offers non-alcoholic beer and wine on its Dry January menu.