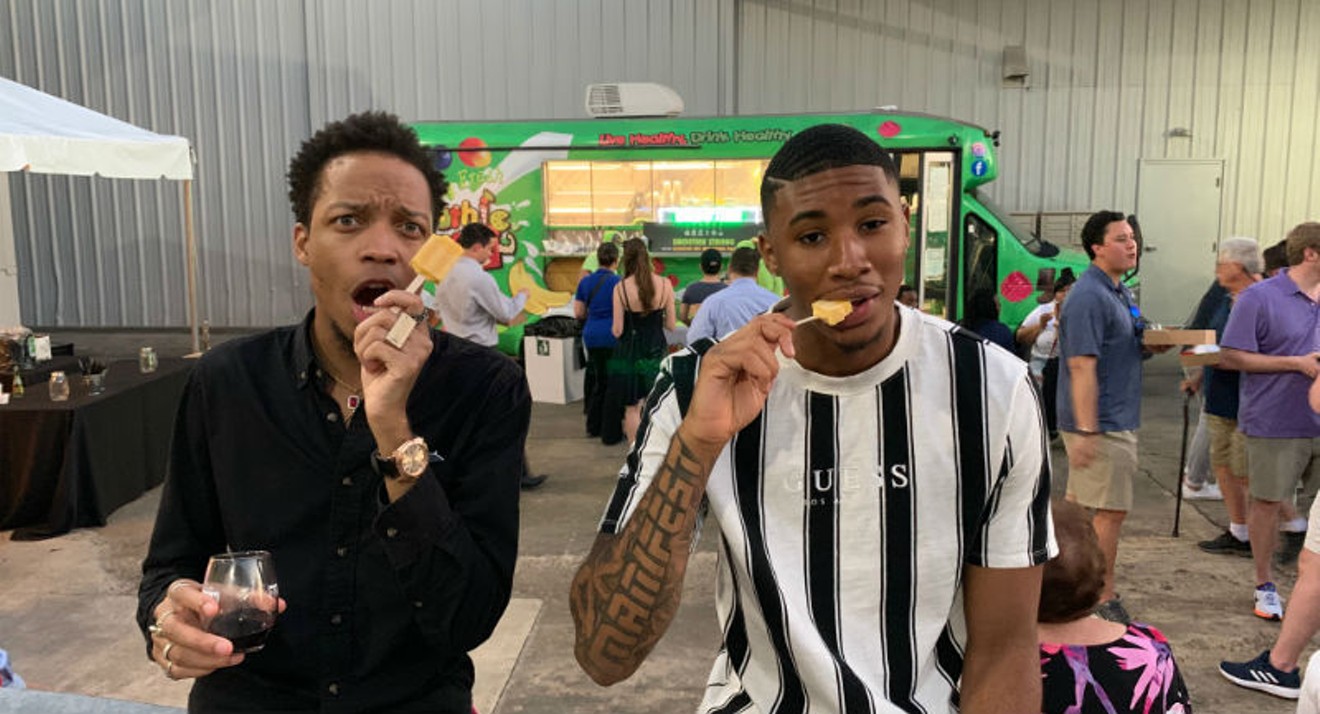 The Don Julio and mango Kic Pops were a hit, too. Photo by Kate McLean

The Houston Press Menu of Menu’s skrrrrt’d into its seventeenth year as people flocked up and down Silver Street Studios sampling items fresh-shucked and frozen. Ketel One, Don Julio and Balcones Distillery to name a few stood by to wash everything down all the while raising spirits along with the collective BAC. DJ Damon Allen spun a little house to warm things up and all of a sudden it didn't feel like Houston anymore. And it didn’t matter that it was a Tuesday, either.

A round of applause please for this year’s People’s Choice award recipient: Mia Bella Trattoria for their Lamb Meatballs and Truffle Risotto.

Here are a few standout bites from the evening:

Chef Evelyn Garcia, residing chef at Decatur Bar & Pop-Up Factory, served up the first bite of the day with Thai Brisket Curry.  So juicy, so rich it warranted a 180 degree turn to find out more. Lots of smiles coming out of this booth as, what’s this! Houston Press contributor and fellow pop-up queen Cuc Lam showed up to help out her buddy.

Another good starting point: Frenchy’s Fried Chicken made a Creole Boudin Egg Roll, crisp and creamy, served alongside a sweet dipping sauce.  One of those first tastes in a long line to follow that's so good you just decide to finish it.  And of course they didn't forget to bring Chicken Chunks dusted in that beloved, spicy flour mix.

Prestige Oysters Inc. hauled in fresh sacks from the Gulf that are, so far, the juiciest catch of the season. “Now is the perfect time of year, they’ve fed all season and are nice and fat,” says owner Raz Halili. More like plump and cocky— I've never seen oysters on an ice display cop such an attitude and rightfully so.  One bite is a complete mouthful, and upon puncturing the flesh, an explosion of rich creaminess unlike any other.  For real, do you want to go out next weekend?

I mean, look at it.
Photo by Kate McLean

Two thousand little donut holes walk into Silver Street Studios— and they belong to Duck Donuts! Open every day from 6 a.m. to 7 p.m., that’s just enough time to have no excuse not to visit. There is something very special about made to order donuts and with cake batter made fresh 'round the clock and endless combinations of toppings, drizzles, and crumbles, Houston is pretty lucky they scored a franchise like this one.

Tony’s Mexican Restaurant brings the braise once again with juicy carnitas served in warm corn tortillas previously slathered in meat drippings. I had to wipe my hand off on the side of a cardboard trash can, but I have to admit, I love your style. 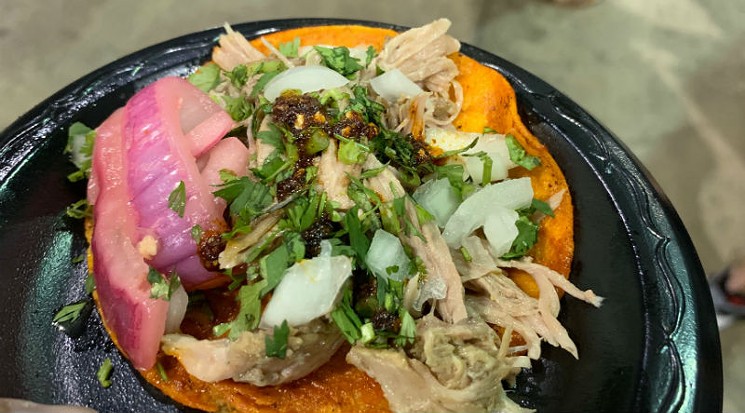 Tony's Mexican Restaurant had the juiciest bite by far.
Photo by Kate McLean
La Argentina Gelato had a steady line throughout the night as scoop after scoop of Dulce de Leche, and five other flavors disappeared into the crowd. Owner Olen Gutierrez married into a gelato making family; his father-in-law an Argentinian master and his wife trained at the Carpigiani Gelato University in Bologna. Using all-natural ingredients, they even import dulce de leche from Argentina.

“Oh, wow, cool. Isn’t the beef, aren’t the cows supposed to be great in Argentina?”

That answers that, I guess.

Ambrizia Social Mexican Kitchen knocked it out of the park with tart and juicy Cochinita Pibil on top of a jalapeño, poblano polenta. The polenta was perfect, not a hint of grain, all fluff and rich from the dairy, well done. And bonus points for passing out mini Tajin bottles with the margaritas— a great party trick, indeed.

Mahalo to Java Lava Brew for bringing those juicy, smoked pork ribs finished with huli huli sauce. Is there anything better than fatty pork falling off the bone? Nah. Nope.

Chef Brandon Silva from Wooster’s Garden added a gentle smoke to the flown-in-fresh-yesterday Hamachi served with salsa macha and topped with pork chicharrones. The complex Oaxacan sauce had the best flavor of the night, and when complimented he was quick to credit his team.
KEEP THE HOUSTON PRESS FREE... Since we started the Houston Press, it has been defined as the free, independent voice of Houston, and we'd like to keep it that way. With local media under siege, it's more important than ever for us to rally support behind funding our local journalism. You can help by participating in our "I Support" program, allowing us to keep offering readers access to our incisive coverage of local news, food and culture with no paywalls.
Make a one-time donation today for as little as $1.