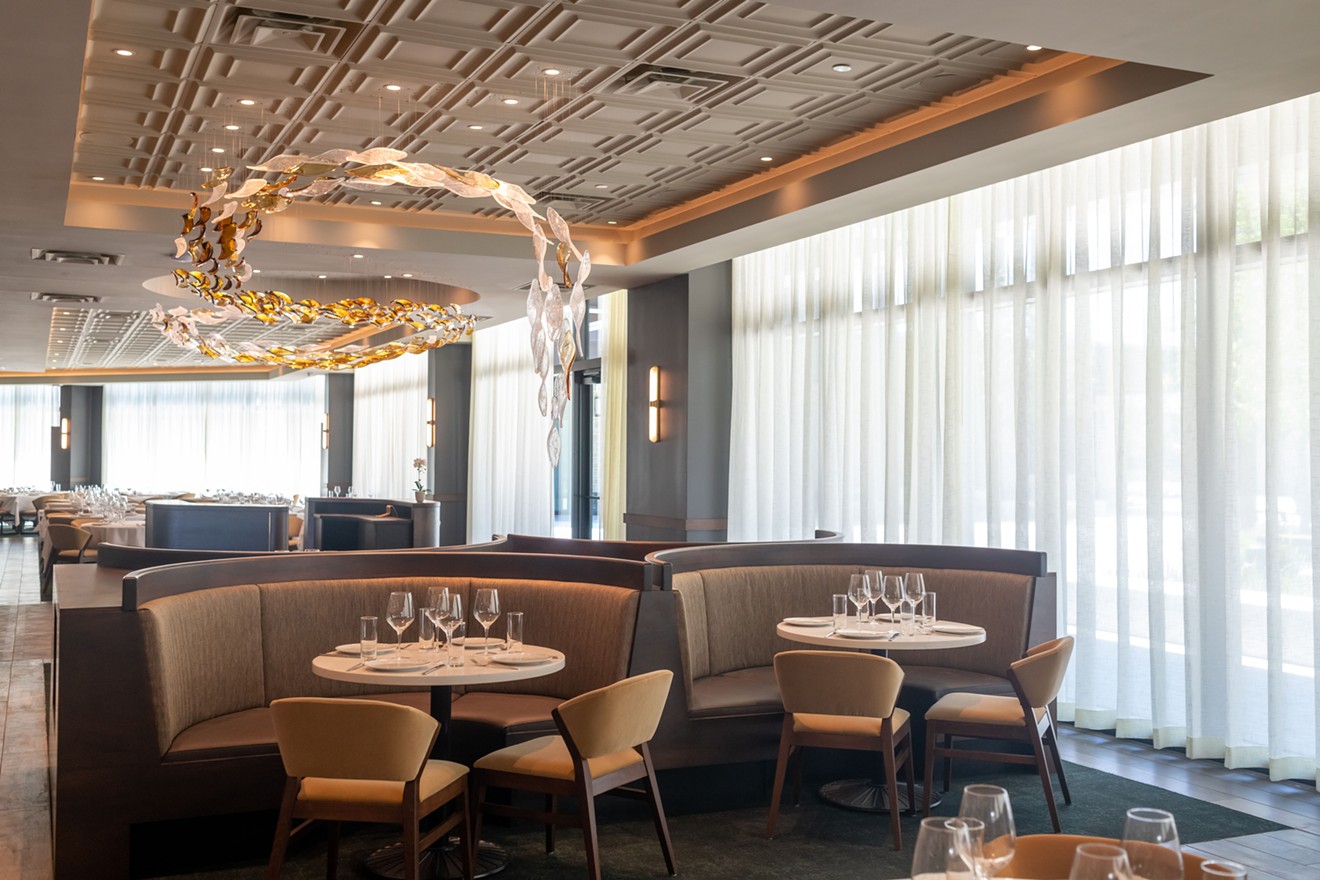 The steakhouse vibe is a little lighter at Georgia James. Photo by Anne Marie D'Arcy 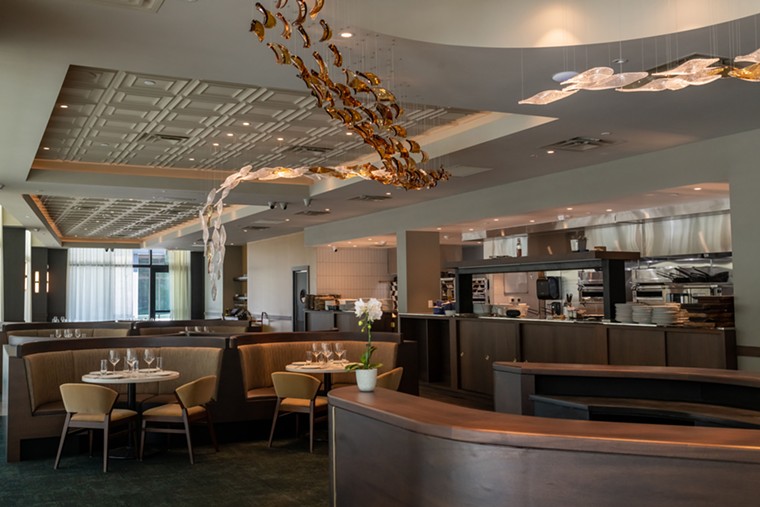 An open kitchen lets guests be part of the action.
Photo by Anne Marie D'Arcy
The Regent Square location is the first new build site for the brand which Shepherd says created a variety of benefits for the resulting design and functionality of the space. In a press release the James Beard Award-winning chef said, " We are so excited to welcome guests in to this cosmopolitan, serene and airy dining room that is as much a representation of Houston's evolution as it is our own."

The new Georgia James will anchor the second phase of Regent Square, an urban infill along the Allen Parkway Corridor, bridging downtown Houston and River Oaks, along Buffalo Bayou Park. It's also the first of three stand alone spaces, each with rooftop decks, to debut at Regent Square. Currently, another Underbelly Hospitality restaurant, Pastore, is being built out next door.

Georgia James will have a 7,000 square-foot first floor dining room with a second floor lounge flanked by two large terraces. Barrio lighting will give the outdoor space a neighborhood feel while fire pits, soft seating and skyline views invite guests to linger and relax. 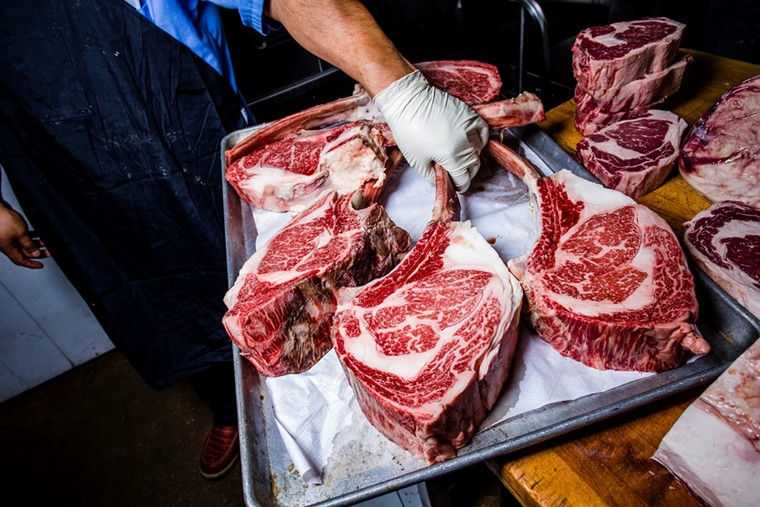 Steaks have their own aging room at Georgia James.
Photo by Drew Anthony Smith
Indoors, the serpentine floorplan apes the nearby Buffalo Bayou with green carpet and woodgrain tile floors continuing the nature theme. Walls of windows give views of the Regent Square green space on the south side while a decoratively tiled Beech oven, intimate raw bar, open kitchen and cocktail bar seating are showcased on the northern end. A sculptural lighting element of handblown Czech glass is meant to represent rising smoke from a fire pit. It was done by Blown, a Florida-based glass company.  The lighting element also divides two distinct dining areas; a western side with semi-private banquettes coupled with marble-topped tables and the eastern portion of the dining room with white tablecloths and Scandinavian-style walnut chairs. There's also a light-filled private dining area,  glassed-in wine room and visible meat aging room. 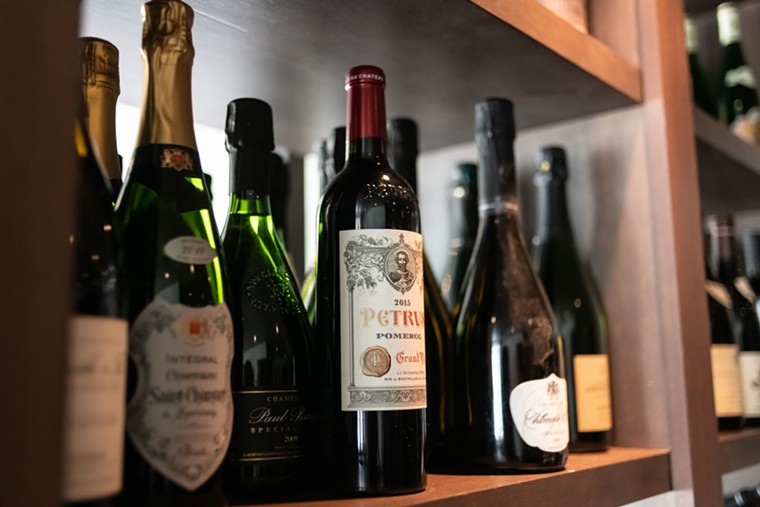 There will be reasonably-priced wines but also steakhouse splurges.
Photo by Anne Marie D'Arcy
The menu will still feature its signature cast iron-seared steaks, cold seafood and seasonal sides but there will also be homages to Houston's diverse culinary history with items such as Viet-Cajun Oysters, an inspiration from Chef Trong Nguyen's Crawfish and Noodles in Bellaire. Nguyen is a James Beard Award finalist who many culinarians credit for pioneering the fusion of Vietnamese and Cajun cuisines.

With custom-made wine racks holding 3,800 bottles of wine, guests will find a wine list of over 500 wines from all over the world. The acclaimed Underbelly Hospitality beverage team has sourced unique spirits from distillers, many close to home, with American whiskey being a particular focus. 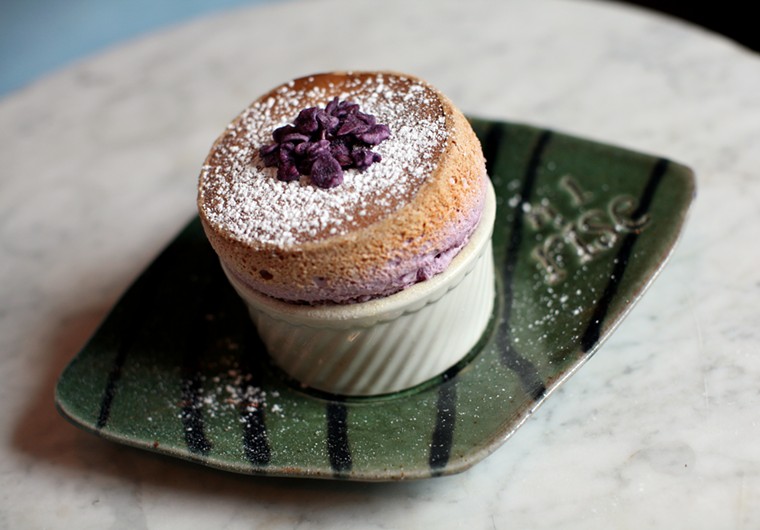 The Violet Souffle is pretty and delicate.
Photo by Rise
Rise, 26435 Kuykendahl, is coming to The Woodlands, as reported by Community Impact. A spokesperson for the company told the Houston Press that it is aiming for February 2023. The Dallas-based souffle restaurant had a location at BLVD Place for four years years but it closed in 2020 due to the ongoing construction on Post Oak which had an impact on access to the center where the restaurant was located. 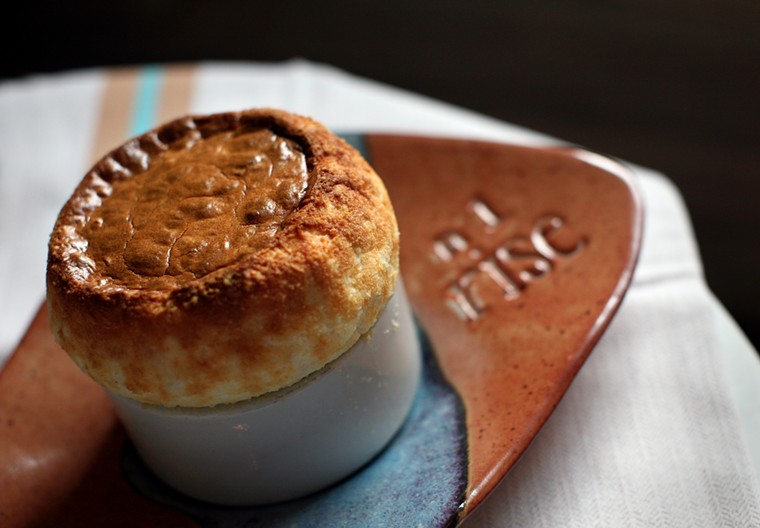 Get your jam on with the Jambon Souffle at Rise.
Photo by Rise
Founded by Hedda Gioia Dowd, the brand was inspired by the sweet and savory souffles made by her French mother and grandmother during her childhood summer trips to France. In 2008, with longtime friend and executive chef Cherif Brahmi, the company opened its first location, Rise No. 1, in Dallas. It opened its Post Oak location as Rise No. 2 in 2016, followed by Rise No. 3 in Fort Worth in 2017.

With its continuing growth, the company felt getting back to the Houston area was of primary importance and The Woodlands seemed a perfect fit, especially since the new location at Creekside Park West is nestled in the trees with a patio space and a calm and relaxing setting. It will join other Houston businesses that are making the move northward including the recently opened Goode Co. Fish Camp and the upcoming Phat Eatery and Bosscat Kitchen. 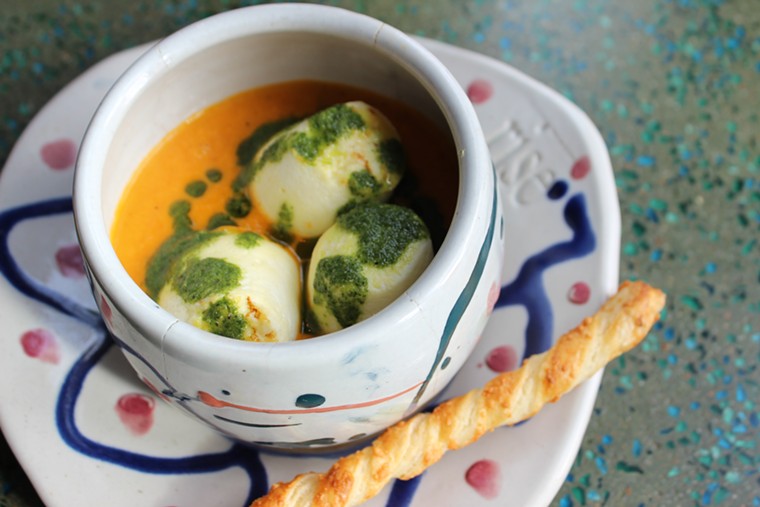 The Marshmallow Soup is really mini goat cheese souffles in a flavorful bisque.
Photo by Rise
Rise offers a menu of starters such as its popular Marshmallow Soup and Soupe a L'Oigne Gratinee. Savory souffles such as Jambon & Gruyere, Sun-dried Tomato & Pesto Chevre and Southwest Chicken are light, yet filling meals while entrees such as Steak & Pomme de Terre and Seared Ahi Tuna Steak offer hearty non-souffle options. For sweet souffles there are options like raspberry, chocolate, Grand Marnier and Praline Pecan along with other desserts including Classic Creme Brulee and Tarte Au Fruit.

The beverage menu includes coffee drinks, soft drinks and wine. However, The Woodlands location will feature a full bar when it opens. 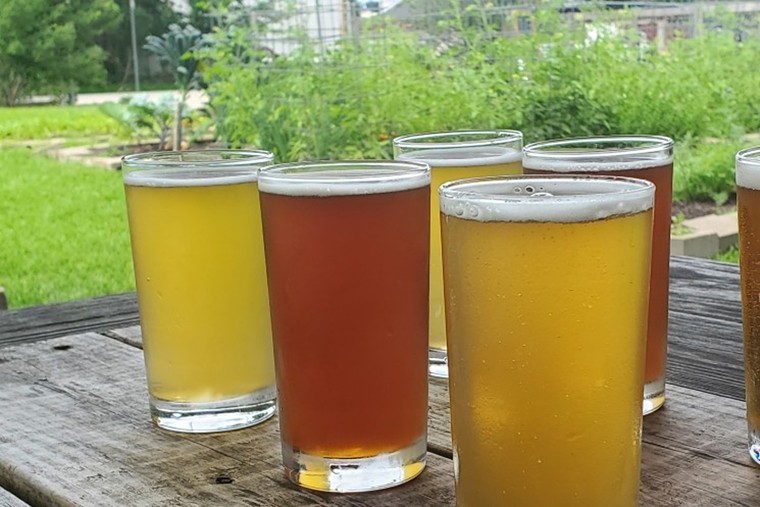 City Acre was voted Best Beer Garden 2021 in the Houston Press Best of Houston.
Photo by Jesse Sendejas
City Acre Brewing Co., 3418 Topping, has been bought by a new owner, according to Chron.com. This means that the northside brewery and taproom will not close July 3 as originally planned. Though the kitchen closed June 5, there are plans to reopen it sometime in July.

The new owner is a longtime customer, Jimmy Garrett, who also owns a local solar energy business. While Garrett said on the brewery's website that "the heart and soul of City Acre isn't going anywhere", he did mention that there will be an expanded menu and a wider variety of events and attractions. He is also looking to increase air-conditioned space at the brewery.

The founders, Matt Schlabach and Meredith Borders opened City Acre in 2016 and it became a comfortable and friendly place for beer lovers to hang out. Unfortunately, it was damaged by Hurricane Harvey in 2017. The owners said in a Facebook post that "rebuilding after Hurricane Harvey had us naively believing that we had seen the worst disaster City Acre would encounter", but the pandemic was another blow and  the brewery never seemed to get back to where it once was.

Bad Astronaut Brewing Co., 1519 Fulton, is expected to open this fall, as reported by CultureMap Houston. The new brewery from owners Chris Fall and Craig "Rocky" Keener will be located in a 30,000 square-foot former warehouse in Hardy Yards located at the intersection of Fulton and Burnett.

Fall and Keener both have experience as former employees of Karbach Brewing with Keener having served as innovations manager for the past wo and a half years, according to EaterHouston.

When it debuts, the focus will be on four beer types: a German Pilsner, Munich Hells, American IPA and a Hazy IPA. The brewery will be bringing in additional beers from other breweries along with wines and cider in the future. There will also be games like darts, shuffleboard, pool, air hockey and corn hole. 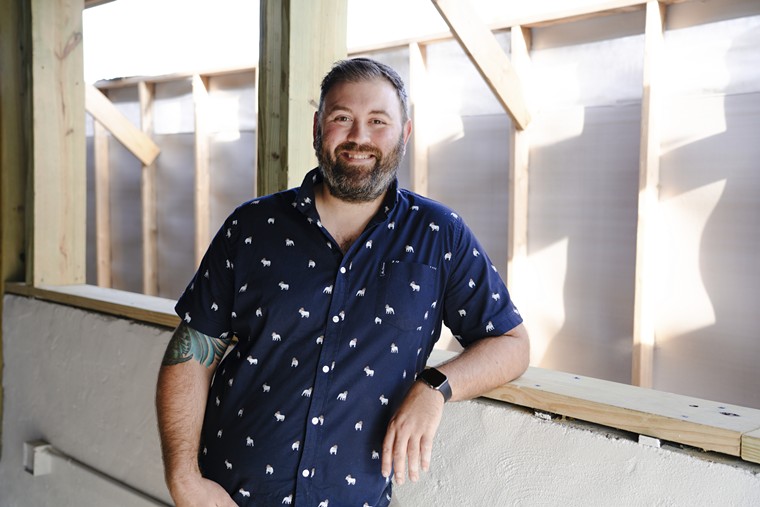 Matt Tanner is bringing a chill hangout to the neighborhood.
Photo by Mikah Danae
EZ's Liquor Lounge, 3302 White Oak, will open later this summer next door to another Agricole Hospitality concept, Coltivare. Co-owner and Operator Matt Tanner has joined with Agricole partners Morgan Weber, Ryan Pera and Vincent Huynh to create a playful, laid back bar inspired by their collective love of neighborhood dive bars and well-made cocktails.  The lounge will have a vintage vibe, befitting its 1950s-era building.

The cocktails on offer will include some frozen and on-tap selections along with draft and bottled beer, plus a well-thought out wine list. For snacks there will no-frills nosh such as Frito Pie, chips and dips and wagyu hot dogs. 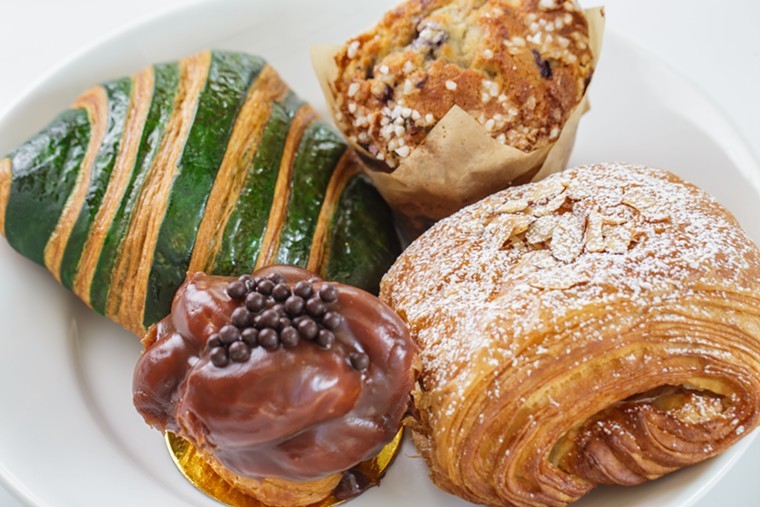 Common Bond's croissants and pastries are ready to be picked up at its newest On-The-Go location.
Photo by Andrew Hemmingway
Common Bond On-The-Go, 1127 Eldridge, opened June 29 in the Energy Corridor. It's the seventh On-The-Go concept and the 12th for the Common Bond brand overall. The Houston-based company secured the lease for the former Beans Cafe space with representation by SRS Real Estate Partners' Edward Heap. The landlord, Vista, was represented internally by Courtney Lavender.

The On-The-Go bakeries offer drive-thru service and quick grab items both savory and sweet. Sandwiches, pastries, cookies and croissants are on the menu along with a full range of coffee options.

Spring Street Beer and Wine,1920 Houston Avenue, closed June 19 after nearly five years. It opened in October 2017 with Matthew Sherrard  and Alex Flores running the show. Both Sherrard and Flores are currently pursuing other opportunities in the hospitality industry.

The former First Ward neighborhood bar is now under new ownership and will be operated as a completely new concept by some of the industry professionals behind Lincoln Bar, Pour Behavior and Conservatory Galleria.

Ori'Zaba's Mexican Grill, 20750 Kuykendahl, had its grand opening June 18 in Spring. This is the second Houston area location of the Nevada-based brand to open. The first Houston area spot opened at 13513 University Boulevard May 10 in Sugar Land.

The fast casual Mexican restaurant was founded in 2001 in Las Vegas and there are currently four locations in the city.  The Sugar Land store was its first expansion outside of Vegas and also the first for Texas. Owner and CEO of Astute Brands, Kori McClurg, is a veteran of the United States Air Force and the restaurants offer 10 percent off every day to all active, reserve and retired military members with a Military I.D.

Diners will find Mexican standards such as chicken or beef taquitos, burritos, tacos and nachos with create-your-own options. There are salads as well as its signature Zaba bowls plus popular snacks like the Zalapeno Ballz, a mix of shredded potatoes, garlic and jalapeno that is fried golden brown and served with chipotle ranch and fresh cilantro. The drink menu includes horchata, soft drinks and agua frescas. We were told that the Sugar Land location is currently working on adding alcoholic beverages to its menu in the future while the Spring location only has beer at the moment.

Woodbridge Wines is launching special Astros-themed bottles of its California Cabernet and Chardonnay  which will be available at Kroger stores and Spec's Wines, Spirits and Finer Foods July 11. Woodbridge is the Official Wine partner of Major League Baseball and the launch of the limited edition bottles coincides with MLB All-Star Week.

The 1.5 liter bottles are the perfect size for a game-watching party and will feature the Houston Astros logo and a baseball on the label.

Brisket Bar-BQ, 5208 Bissonnet, closed June 5
Shoot the Moon, 8115 Long Point, closed June 19
KEEP THE HOUSTON PRESS FREE... Since we started the Houston Press, it has been defined as the free, independent voice of Houston, and we'd like to keep it that way. With local media under siege, it's more important than ever for us to rally support behind funding our local journalism. You can help by participating in our "I Support" program, allowing us to keep offering readers access to our incisive coverage of local news, food and culture with no paywalls.
Make a one-time donation today for as little as $1.