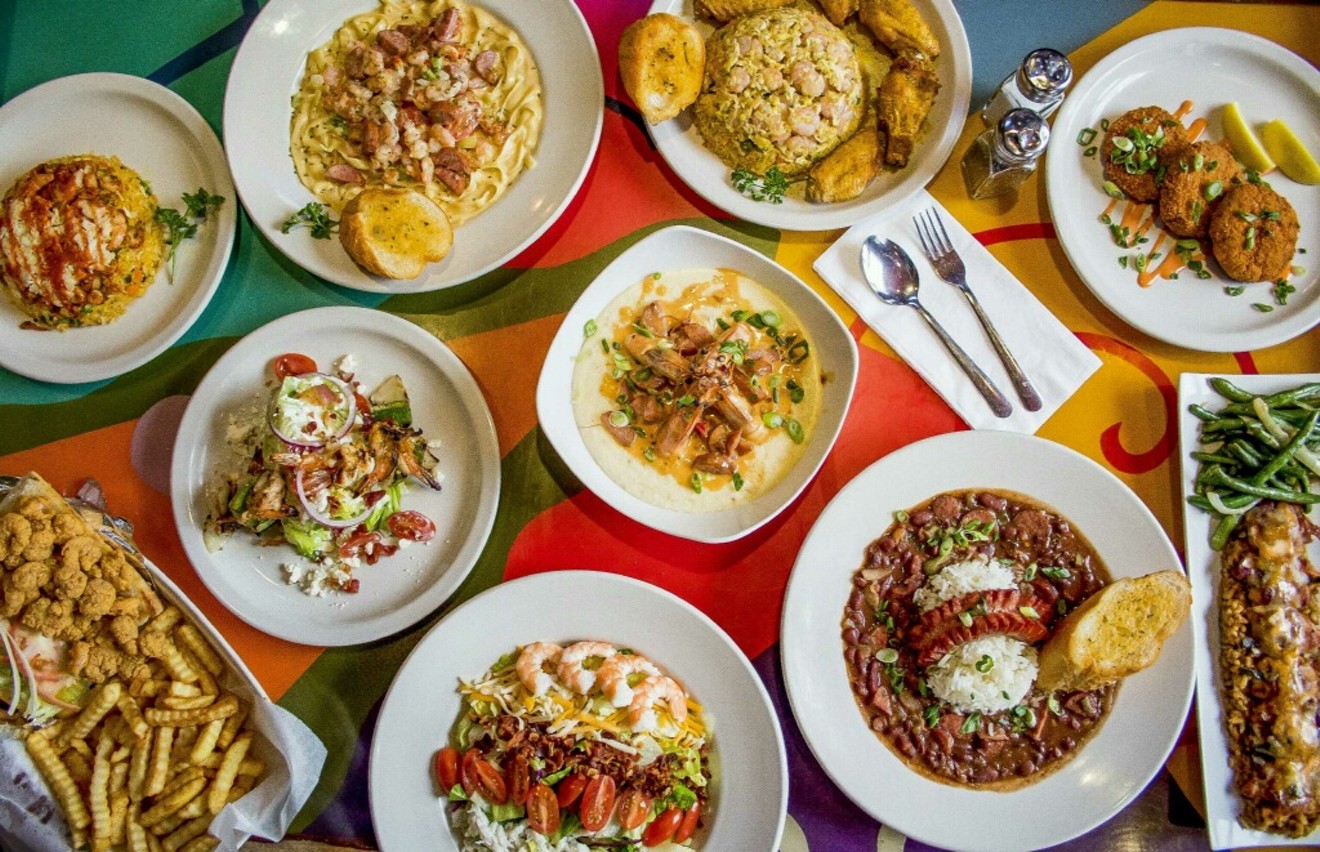 Cajun Heaven in Houston at Hank's. Photo by Amanda Vu

The Vu family emigrated from Vietnam in 1979 and settled along the Gulf Coast before ending up in Houston. Amanda Vu told the Houston Press that her uncle, Scott Vu had a passion for food and when he decided to open the first restaurant in Chinatown in 2006, after Hurricane Katrina, Vu decided to name the restaurant after a friend and mentor named Hanh who helped the family tremendously while they were getting on their feet. The family also lost an aunt whose name was Hanh, while leaving Vietnam. They decided that the Americanized version, Hank's, would pay homage to both. Rain is nothing when you have a covered patio.
Photo by Amanda Vu
Amanda and her brother Anthony Vu now own their own versions of Hank's, all serving fresh seafood and Cajun dishes like gumbo and etouffee, plus the seafood boils that entice diners despite the occasional two-hour wait. At the new Hank's Crab Shack, Amanda will be working the front of house and perfecting the cocktail menu, while Uncle Scott will be working his magic in the kitchen with a staff of 15-20 people, in order to keep the mudbugs and crabs flowing.

The new outpost plans to also mitigate the wait with more seating and offering full service or a fast-casual counter service option. The bar will have ample seating for those who prefer a full-on dining experience and the large, temperature-controlled covered patio will tempt seafood lovers for al fresco crawdad sucking and crab shucking. For take-out, the restaurant will offer the same drive-thru service as the other locations.

Crab boils need a cold beer or a cool cocktail to counter the spice and Hank's will have plenty of options, including the Crab Shack Long Island, a Grenade (available on the rocks or frozen), and Micheladas made with the restaurant's own in-house mix. 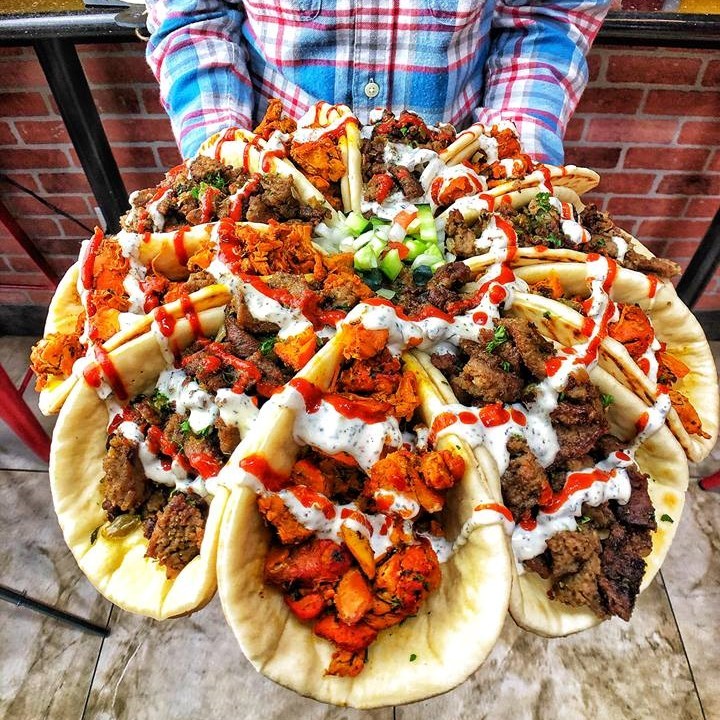 Gryos fit for a king, or queen.
Photo by Ibrahim Halawa
Gyro King, 12020 FM 1960 West, softly opened December 4, but the grand opening, which promises to be really grand, is January 13. The Mediterranean restaurant also operates a restaurant in Sugar Land and a food truck in the Medical Center. It caters to late night kebab seekers, with its opening hours of 11 a.m. to midnight, Sunday through Thursday and it stays open until 2 a.m., Friday and Saturday.

Besides kebabs and gyros, there are the rice platters, with choice of meats, plus salads and a few seafood dishes. The gyro fries are an unhealthy, over-the-top splurge, but a healthy juice from the juice bar could get the digestive enzymes in motion. There is also beef chapli, a Persian mincemeat kebab patty. For dessert, try some baklava or even French macarons. 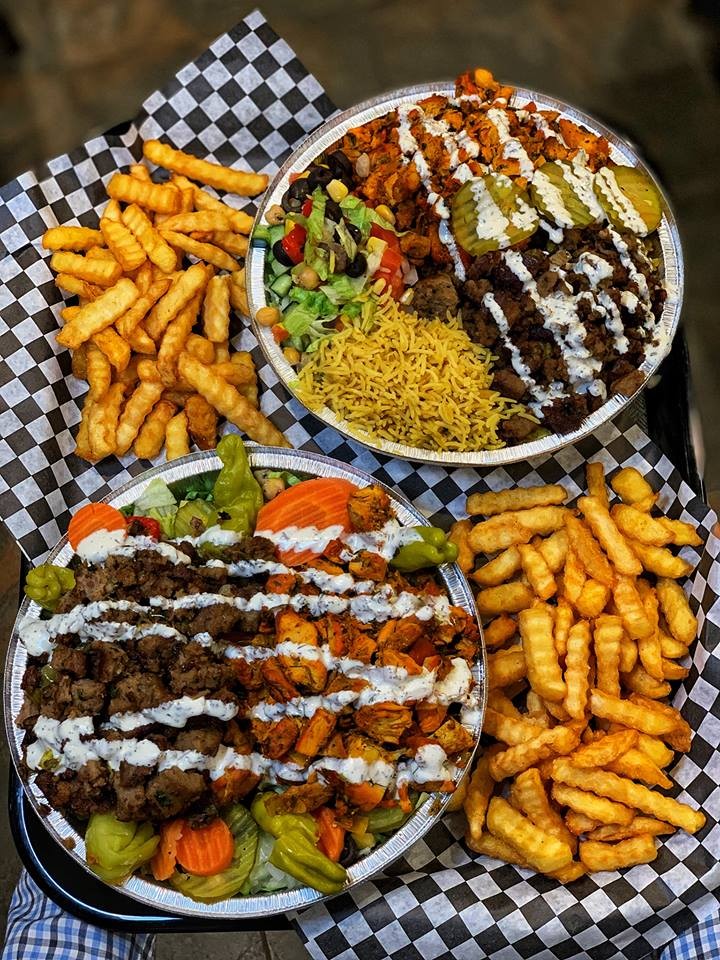 Meat me at Gyro King.
Photo by Ibrahim Halawa.
The Gyro King offers party platters for the big game or family get-together.

The grand opening will begin at noon and last all day, January 13. It will feature a huge give-away with items like televisions, iPads, beats headphones and gift cards. For little ones, there will be face painting and balloon-twisting. 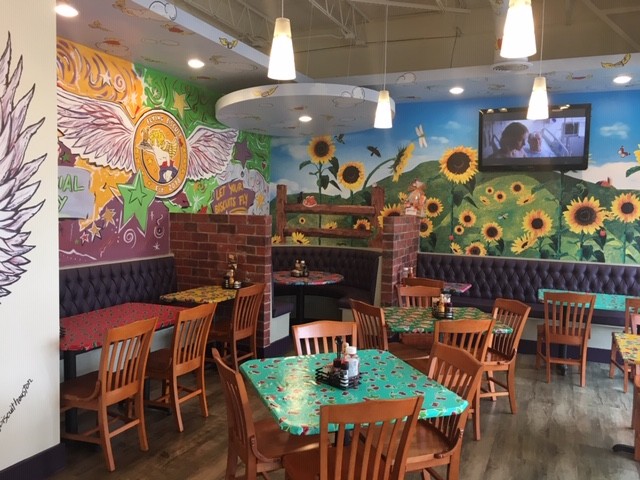 Flying Biscuit Cafe, 12389 Kingsride, opened December 3 in Memorial City.  Another Flying Biscuit will be opening late 2019 in Midtown at 2850 Fannin.

The restaurant chain was founded in Atlanta, Georgia in 1993 and currently has 14 locations. It serves Southern comfort food like shrimp and grits, "Not Your Mama's" pimiento cheese sandwiches and an oven-fried green tomato BLT. It is open for breakfast and lunch and serves breakfast all day, including eggs Benedict, buttermilk pancakes and biscuits, eggs and gravy. Unlike the current trend of boozy breakfast joints, Flying Biscuit Cafe serves non-alcoholic beverages including coffee drinks, chai tea and juices.

The first Texas store opened in Richardson in 2017. Javier Gomez is the owner of the Memorial City outpost and plans to partner with local institutions and organizations plus have the restaurant's presence at events like the monthly Coffee and Cars, which takes place the first Saturday of each month at Memorial City Mall.

The Rock is bringing back favorites.
Photo by Josh Olade
The Rock Food Truck, 15914 Telge, began its soft opening at Brew:30 Taphouse, in late November. Still in its early stages, the new food truck comes from Melinda Mayes, former executive chef and partner of Rockwell Grill, which closed in November 2016. The Cypress institution was a comfortable hangout, known for its juicy burgers. Now, Mayes has joined with former Rockwell Grill partner, Tiffany Richie and Gary Marler, who own Brewhouse:30 Taphouse, to fulfill the requests of former customers who miss the food of the shuttered restaurant. 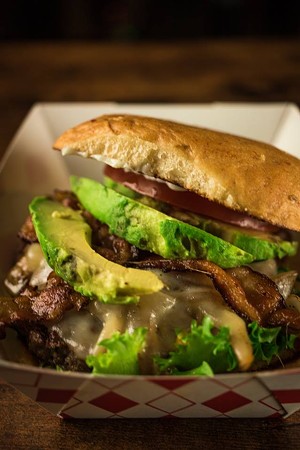 Avocado adorns the juicy Laguna burger.
Photo by Josh Olade
Mayes told the Press that favorites from the old restaurant will slowly make their way back onto the food truck's menu, depending on storage and refrigeration. Some items will become permanent, while others may rotate as specials. The super-green food truck can be found in the front parking lot of Brewhouse:30 Taphouse on Wednesday and Thursday, 5 p.m. to 8:45 p.m. and Saturday and Sunday, 11 a.m. to 9:45 p.m.

So far, dishes like the Rockblanco queso and Laguna burger are hitting the mark with patrons.

The doughnut empire began in Winston-Salem, North Carolina before expanding to cities like Savannah, Georgia and across the southeastern United States. The corporation has seen some major ups and downs throughout its history and has taken the business international. Krispy Kreme products can also be found in grocery stores throughout the United States and the United Kingdom.

The holiday-themed doughnuts such as Santa Belly and the Ugly Sweater left the stores on December 24, but it's the original glazed doughnuts that top the list for most Krispy Kreme fanatics anyway.

Canino Produce, 2520 Airline, will close January 21, according to abc13.com. Co-owner, Bill Canino and his brother-in-law, Lawrence Pilkington, are retiring and no family members will take over. Canino's father started the business in 1958. Canino says it breaks his heart to let go of the 30 employees, some of whom have worked there for nearly 50 years.

The lack of local farmers also contributed to the decision to close the market. However, plans for the redevelopment of the Houston Farmer's Market continue and food enthusiasts are sure to be pleased with the future upgrades to parking and the market itself. Along with all of the local farmers markets and fancy food halls, it will be another feather in Houston's cap, or chef's toque, further cementing Houston's reputation as a culinary and multi-cultural destination.

Cloud 10 Creamery, 3201 Louisiana, opened December 21. The artisanal ice cream shop closed its location at 5216 Morningside to relocate to the Mix at Midtown, as reported here in the Press.

Aqui, 520 Westheimer, closed December 23
Baba Yega, 2607 Grant Street, closed temporarily due to fire
Cloud 10 Creamery, 5216 Morningside, closed December to relocate
Fitzgerald's, 2706 White Oak, will close January 1
Fountain View Cafe, 1842 Fountain View, closed December 3
KEEP THE HOUSTON PRESS FREE... Since we started the Houston Press, it has been defined as the free, independent voice of Houston, and we'd like to keep it that way. With local media under siege, it's more important than ever for us to rally support behind funding our local journalism. You can help by participating in our "I Support" program, allowing us to keep offering readers access to our incisive coverage of local news, food and culture with no paywalls.
Make a one-time donation today for as little as $1.