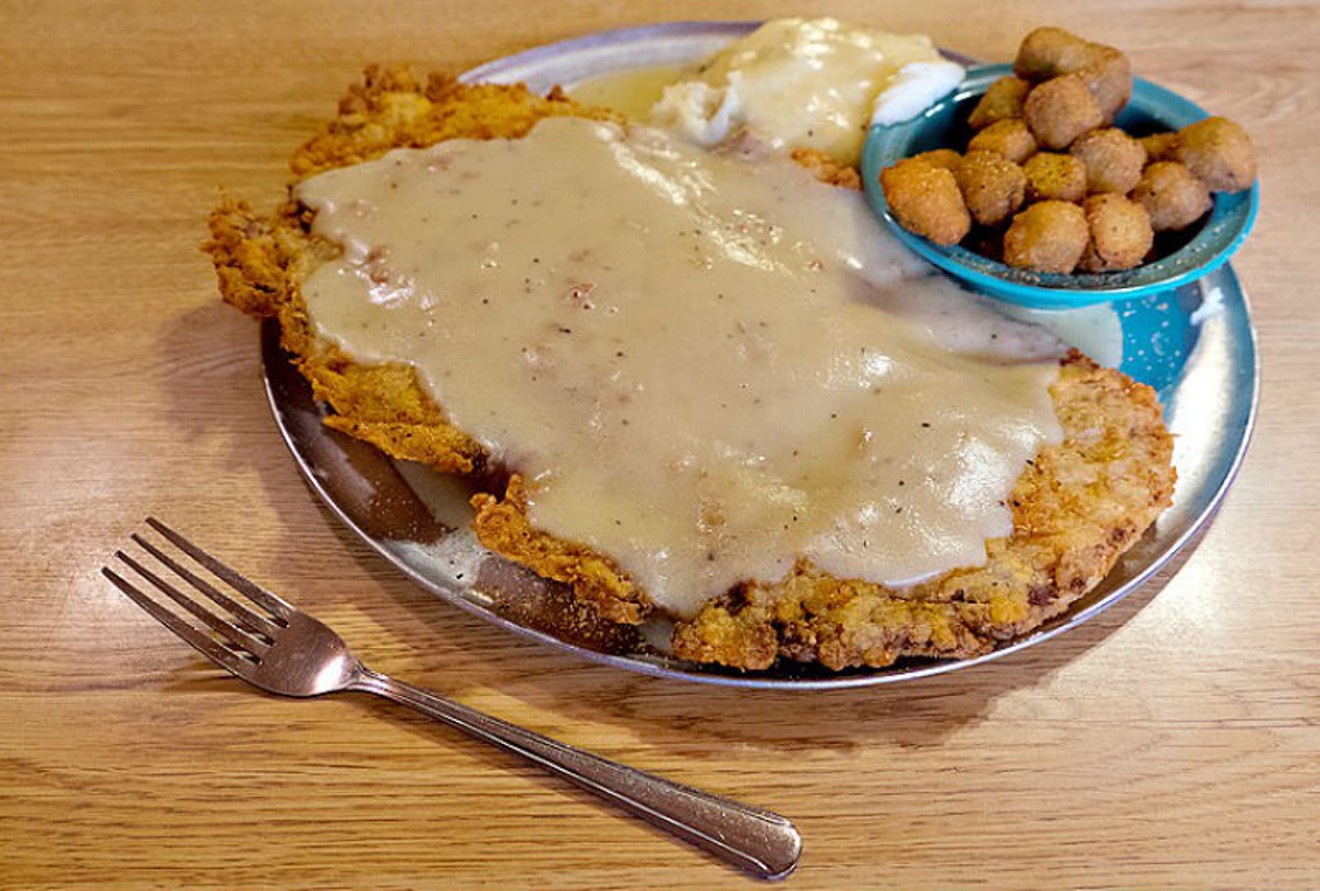 This is only the medium chicken fried steak. Photo by Phaedra Cook
The other day, a post popped up in my Facebook timeline discussing the weirdness that is restaurants closing out of the blue, with neither a word of warning for their customers or their employees. That sort of thing is always a bummer because it makes the whole thing feel extra fly by like the people behind the business never really cared about anything other than profit. At the very least, it’s a bad look.

So while it is indeed sad that Hickory Hollow is closing its location in the Heights, at least they’re giving us enough lead time to squeeze in a few more bites of barbecue, giant baked potatoes, and some of the best chicken fried steaks in the area. The location at 101 Heights Boulevard has been sold to Braun Enterprises, while their outpost at Fallbrook will remain open for now. The Heights location will remain open through January of next year.

One would think that five months would be enough lead time to properly celebrate and mourn the loss, but unlike some other recent closings, this one is hitting me particularly hard. Although I’ve called Houston my home for half a decade now, at my core I’m a transplant, one that doesn’t have the deep nostalgic ties that many of you do for the places you grew up eating.

It’s a testament to the quality of their food that I gravitate there so often because I don’t think there’s anything considered a light meal at Hickory Hollow. Even the small portions of their chicken fried steak would put most other regular portions to shame, and when you add on their sides you’re basically running head first into a food coma. If you’ve got plans, you really have to weigh that choice to go to Hickory Hollow, because when all is said and done you might be too stuffed to do anything, though you’ll never regret your decision.

Hickory Hollow has taken home the title of Best Chicken-Fried Steak multiple times when it comes to our Best of Houston, owing in large part to its perfect blend of quantity and quality. This isn’t one of those fancy steaks that out of its way to be different for the sake of being different; it features a simple breading that cracks in just the right way, with a solid breading-to-meat ratio. The gravy is simple as well, hitting that sweet spot of not drawing too much attention to itself while always not being under seasoned; it’s exactly what you want from a supporting player.

I’ve only eaten the large chicken fried steak once, the one that’s gotten them some national television attention. You can’t be a little intimidated when you get it to your table and you realize you’re about to try and eat something the size of a hubcap, plus two sides and a drink. The truth is the only reason I felt bold enough to eat a chicken fried steak that size was because it was election night, and I figured I deserved something nice on the precipice of something that might end up being so bad.

But it’s not as if those massive steaks are going away forever (yet). They’ll just take a little bit more work to get. But Houston is a city of out-of-the-way locations we still visit on the regular because our city is wide and our passions run deep. And even though I’ll miss the location, I’ll still have the memories of steaks consumed on nights of triumph and tragedy, of loneliness and friendship. I’d rather not say goodbye, but at least the ending won’t be a surprise.
KEEP THE HOUSTON PRESS FREE... Since we started the Houston Press, it has been defined as the free, independent voice of Houston, and we'd like to keep it that way. With local media under siege, it's more important than ever for us to rally support behind funding our local journalism. You can help by participating in our "I Support" program, allowing us to keep offering readers access to our incisive coverage of local news, food and culture with no paywalls.
Make a one-time donation today for as little as $1.