A Look Inside The Hidden Cellar: A Neighborhood Wine Bar in North Cypress

Happiness is a full wine cellar. Photo by Lorretta Ruggiero

A couple of weeks ago, we went in search of good wine bars north of Houston. Now, no list is ever complete and sometimes readers mention favorites that they feel weren't represented. Such was the case with The Hidden Cellar.

On a lazy Sunday afternoon, my husband and I decided to make the trek to North Cypress, to see if indeed this wine bar was worth the drive up the horror of Highway 290. The directions were pretty straightforward. Unfortunately, it required sudden merges, narrow lanes and an abundance of orange cones thanks to ongoing construction. We missed the unmarked exit and had to make a U-turn. Once we turned onto House and Hahl, there were a number of sharp curves (like 90-degree angle-type curves) until we finally arrived at a strip center that seemed to have been dropped in the middle of nowhere. 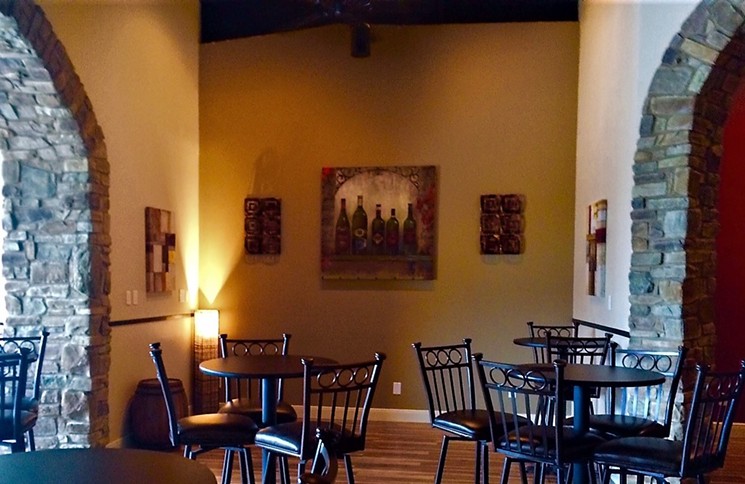 photo by Lorretta Ruggiero
The interior of The Hidden Cellar was a nice surprise, considering. There were stone arches and buttery-colored walls bedecked with wine-themed art. A few mid-century-style chairs in front looked comfortable, but the majority of the seating was high cocktail tables and run-of-the-mill bar stools.

The husband and I took a seat at one of the tables close to the small bar at the back. We were early birds, the only customers. A young man came over, gave us menus and explained the Sunday special: 50 percent off glasses of wine from opened bottles.

This seems to be common with wine bars, and it makes for a good way to get rid of the open wines left over from the busy weekend. There's always the chance that you get a wine that has been sitting open for a couple of days, but so far, we have been lucky that the wines have still been drinkable.

Our server asked what varietals we liked and we asked what cabernets he had open. He brought us a sample of the Silver Palm, which I thought was a bit tannic, but my husband liked it fine. I decided to go with the JaM Cabernet. Our server said it was "fruit-forward" and it was definitely that, hence the name "Jam." At first it seemed a bit thick in the mouth, but subsequent sips found me enjoying its plummy flavor.

The Sunday food menu is rather limited. It had the usual wine bar fare of cheese plates, hummus, olives, etc. We just wanted a simple bite to eat, so we decided to split a chicken salad croissant.

Okay. I know it's a wine bar and I wasn't expecting something Texas-size, but my husband and I had to try not to snicker when it was set down between us. It was a snack-size croissant with a few tablespoons of chicken salad spooned into its teeny pocket. The chicken salad delivered on flavor, with the pecans and dried cranberries, but it was très petit. At least it came with potato chips.

We decided to try some different wines. My husband went with a Malbec, the Reserve, and I went a little lighter with a French rosé, Belleruche. It had a nice floral scent and was even a little effervescent. Of all the wines we tasted, we liked the smooth richness of the the best.

By our second glass of wine, several regular customers had arrived and were sitting at the bar. The bartender, who was also our server, knew everyone and there seemed to be a comfortableness that you get only with familiarity.
click to enlarge 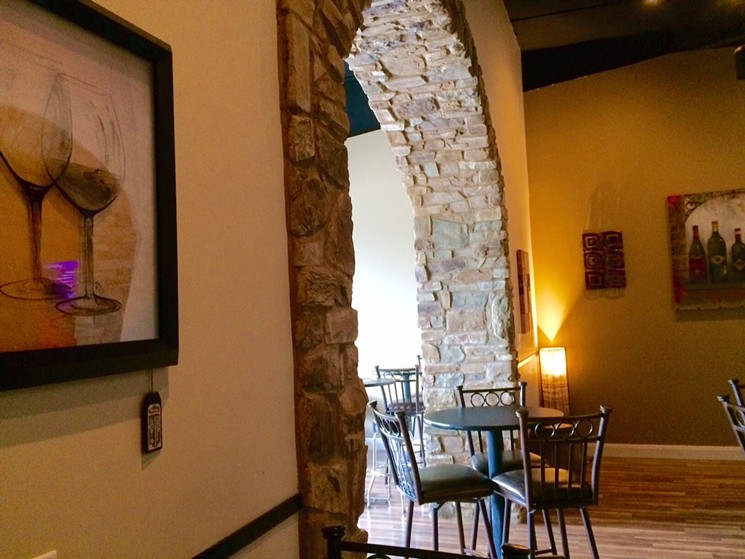 The elegant artwork goes well with the gorgeous stone arches.
photo by Lorretta Ruggiero
As we were getting ready to leave, another couple of regulars entered with a covered dish. I think they were well aware of the limited Sunday food options. They were kind enough to offer us a sample of whatever it was, but we were already on our way out the door. If we lived in the area, we might have been tempted to stay longer.

The wine bar is located in the Bridgeland and Blackhorse Ranch area close to the Blackhorse Golf Course. And the prices reflect the upscale community. While we were happy to pay $25 for four glasses of wine at half price, $50 would have been more than we usually would do. There was only a handful of wines under ten bucks a glass and the average is around $13. The pours were about average, so the better deal during the week would be to order a bottle.

The Hidden Cellar seems to be a good fit for the surrounding area, but it's not a destination wine bar unless you go for the live music on Fridays and Saturdays. It does have a larger dinner menu during the week and occasional food specials. The service was good, the decor is attractive and, for the regular clientele who know the winding curves of House and Hahl Road, this is their hidden gem. For the rest of us, it is a bit out of the way.