The Charlotte-Eclair is almost too pretty to eat. Almost. Photo by Karine Favre-Massartic

Cafe , 122 West Gray, began its soft opening February 9, just in time for le jour d'amour, Valentine's Day. The French cafe serves a unique variety of eclairs, such as vanilla lavender as well as the more traditional chocolate covered pastry. The menu also offers savory versions like salmon artichoke, for an elegant lunch. There are specialty coffees and loose-leaf teas, along with biodynamic and organic wines. For a traditional French repast, go for the quiche or croque monsieur. Have champagne on the terrace. 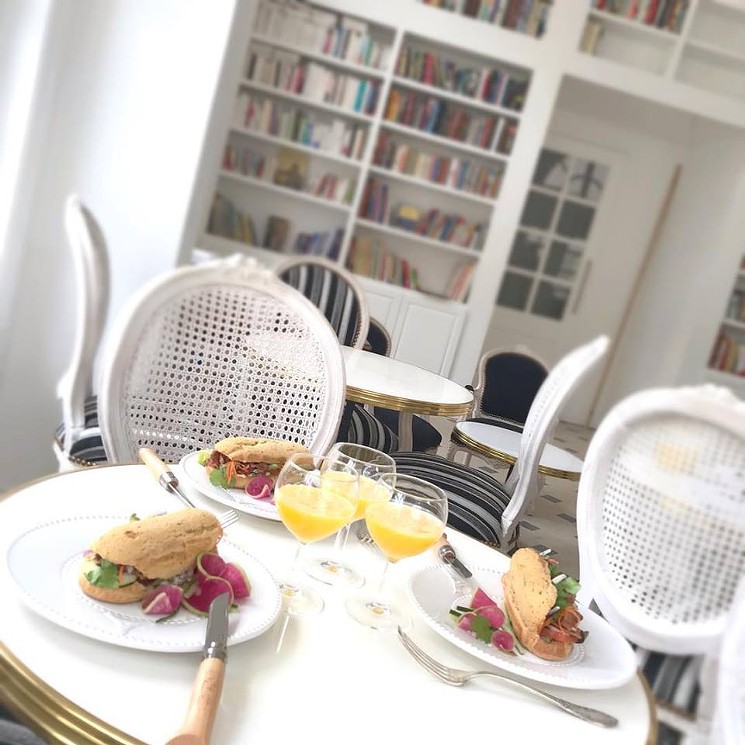 The decor is as delicious as the eclair sandwiches.
Photo by Karine Favre-Massartic

The pretty, feminine decor fits beautifully in the purpose-built, cream-colored building. The bookcases are filled with books for perusing, adding to the cozy, European cafe feel. For wannabe poets, daydreamers, and Francophiles, this is the place to indulge your fantasies. Or your craving for anything made with choux pastry.

This is for serious carne-philes.
Photo courtesy of Ford Fry Restaurants

Superica, 1801 N. Shepherd,  will open this spring as reported here in the Houston Press. Houston native, Ford Fry, will bring his Tex-Mex concept to the Houston Heights after the success of the other two Superica locations in Atlanta. Fry also owns State of Grace restaurant in River Oaks, which opened in 2015. A recent press release details the plans for La Lucha, a neighborhood, Gulf-centric bar under the same roof. Inspired by Fry's love of the over-the-top meals at the San Jacinto Inn, the bar will house an oyster-shucking room and a wood-burning hearth for roasting Gulf Coast-only oysters. There will be plenty of other Gulf Coast seafood on offer, as well as fried chicken dinners.


Arcodoro, 5000 Westheimer, a long time Houston favorite closed February 8, according to the Houston Chronicle. Owner Efisio Farris opened the Galleria restaurant in 1997, serving dishes inspired by foods of his native Sardinia. Efisio and Lori Farris also owned Pomodoro, an Italian restaurant in Dallas, which was opened in 1988, but closed in 2015 so that the owners could focus on Arcodoro. No word yet as to why the restaurant has shuttered.

Yo-ho-ho and seventy-five bottles of rum!
Photo courtesy of Levi Tatum
High and Dry, 306 Main, will have its soft opening February 17, with plans for a grand opening weekend starting March 10. Owner Levi Tatum, formerly the General Manager at Bovine and Barley, has created a rum-centric oasis, featuring over 75 curated rums, along with a cocktail menu making good use of the rums on offer with fresh juices and house-made ingredients.

The tiki gods watchover your rum filled adventure.
Photo courtesy of Levi Tatum
The custom-made, hand-carved, ten-foot-high tiki statues highlight the 50-foot long bar, accentuating the exposed brick of the hundred years plus building. The floors of the historic Main Street are original and the second story bar looks over Market Square and down into the glass ceiling of Okra Charity Bar.

After Hurricane Harvey, we Houstonians need a place called High and Dry.

The brewpub is kid friendly and pet-friendly. There is no kitchen, but there will usually be a food truck,  such as SUR Latin Fusion Cuisine, which was available to brewery visitors last week.

This little piggy has to find a new home.
Photo courtesy of Joe Duong
Ethel Mae Bourbon and Bacon, Barker Cypress has closed indefinitely, due to its proximity to Kids R Kids Learning Academy, as reported by Community Impact. The City of Houston's limited purpose city limits law prohibits the sale of alcohol within 300 feet of a childcare facility or private school.

Owner Joe Duong is completing renovations on his original The Shack Burger Resort at 16602 Cypress Rosehill. It has been closed since December but should reopen in a couple of weeks. Duong may transfer some of the menu items from Ethel Mae's to the Shack.

Another reason to visit Heights Mercantile is coming soon.
Photo by Lorretta Ruggiero

Postino WineCafe, 714 Yale, is coming to the Heights Mercantile in mid-spring 2018. The original Postino was founded in 2001 in a 1940's era building in Phoenix which was previously a post office, thus the name, which means postman in Italian. There are four other locations in Arizona and one in Colorado. The Houston location will be in a renovated 1940's warehouse.

Upwards Projects, the restaurant group behind the concept, renovates older, historically relevant buildings in revitalized neighborhoods. Postino co-founder, Lauren Bailey says, "There's so much to love about the city of Houston and the Heights in particular-with its eclectic and communal feel. "

There will be an expansive patio facing the bike trail for those who want a cool drink and a bite to eat after a ride. The cafe will be a comfortable, casually stylish spot for a long lunch with friends, especially with its daily drink specials, 11 a.m. to 5 p.m., offering $5 glasses of wine and 32 oz. pitchers of local brews for $5 as well.

There are more than ten varieties of bruschetta, with the option of mix and match choices. The menu also includes panini, salads, cheese and charcuterie boards to accompany a wine menu curated by Advanced Sommelier, Brent Karlicek.

If you have the wee ones in tow, there is a small kids menu.

Von's Chicken, 10026 Long Point, opened February 1. Known for its Korean spicy fried chicken, the chain from South Korea began its U.S. journey in Sunnyvale, California in 2014. This is the first Houston location and the second in Texas. The chicken is available roasted as well and diners can choose mild or spicy. There is a full bar to help quench the heat. Its early days are seeing some long waits and service issues, but the food is getting good reviews.

Green Ceviche, 12555 Westheimer, opened January 12. The restaurant offers a variety of fresh seafood ceviche. You just pick the style. There is Peruvian, Mexican, Asian, and Poke or you can create your own. There are also Baja tacos, salads, a kids menu, and beer and wine. There is another location in Edinburg, Texas. 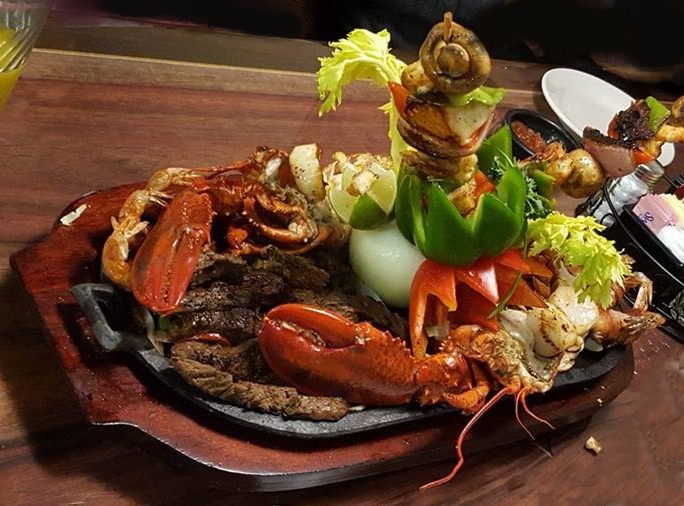 Photo courtesy of Blue Bayou Cafe
Blue Bayou Cafe, 12008 I-10 East Freeway, had its grand opening January 25, with live Zydeco music and lots of boiled seafood. The restaurant, formerly Crazy Alan's Swampshack Houston, received extensive flooding and damage during Hurricane Harvey. The owner has remodeled, repaired and rebranded. The new concept is a fusion of Cajun and Mexican flavors, so carnivores can order over-the-top fajita platters like the Parillada Patron or seafood fans can opt for the ultimate in boiled seafood, the Queen Pot.

The restaurant has great crawfish specials so check out its Facebook page for the $4.99 a pound specials, with a five-pound minimum order. Happy Hour is Monday through Friday, 3 p.m. to 7 p.m. with $2 house margaritas and $1.99 domestic draft beers. Happy Hour also offers half-priced appetizers, in the bar only.

There is an iPad station with multiple iPads for the kiddos. The restaurant also has occasional live music.

There is still a Crazy Alan's Swampshack in Kemah.

I like big carbs and I cannot lie.
Photo courtesy of Delices de Maurice

Delices de Maurice, 22764 Westheimer, is a French bakery whose beginnings go all the way back to Lebanon when the family first started a patisserie in 1963. In 1996, Dany Srour and his wife Nadine opened Delices de Maurice in Beirut. Srour came to Houston to work as pastry chef at Flo Paris in 2015 before deciding to create a new bakery in honor of his father's business in Lebanon many years ago. It opened December 11, 2017.

The bakery serves breakfast and lunch, with items like croissants, fruit tarts, baguette sandwiches, French onion soup, and crepes. They are open Tuesday through Saturday, 7 a.m. to 6:30 p.m. and Sunday, 7 a.m. to 5 p.m. The restaurant is closed on Monday.