Merchant is open with crepes, lunch fare, coffee and wine. Photo by Gwendolyn Knapp
Merchant, a popular breakfast spot in New Orleans, opened location at 1707 Post Oak Boulevard (at San Felipe) on September 5, according to Eater Houston. With the tagline “coffee, and grapes,” the cafe offers Illy coffee and specialty drinks like chicory lattes. It also serves sweet and savory crepes, sandwiches and salads. The cafe is open from 7 a.m. to 5 p.m. but there are plans to stay open until 10 p.m. as the restaurant adds staff. Within a few weeks, it will also serve wine and beer.

The New York and Chicago Pizza Company is relocating from its present location at 12361 Barker Cypress, Suite 100, to a larger space in the same shopping center at Suite 900, formerly occupied by Wine Styles, as reported by Community Impact.

Owner and New York native, Domenic Catalano, told the Houston Press that the last day of operation for the present location would be October 1. He hopes to have the new space ready for business by late October. The restaurant serves both New York and Chicago style pizzas along with beer and wine.

Catalano has plans to open a second restaurant at Highway 290 and Mueschke, with a fully-stocked bar and a NY coffee shop-style breakfast menu. The opening is slated for January 2018.

Hurricane Harvey put a kink in the opening of the White Oak Biergarten, 2520 Houston, formerly Lucky’s Pub in the Heights, with 12 feet of floodwater and a floating semi-truck. Jim Buchanan was preparing to open his Buck’s Barbecue Co. inside the now damaged venue. Those plans have been put on hold for a month or so, according to Houston CultureMap.

Meanwhile, Buchanan will set up shop at the Great Heights Brewing Company, 938 Wakefield, on Friday nights at 6 p.m. and Saturdays and Sundays at 11 a.m., for those eagerly anticipating the ribs with espresso rub.

Cordúa Restaurants has closed its Upper Kirby eatery Amazón Grill, 5114 Kirby, and rebranded it into an online-based food delivery service called Amazon Grill on the Go, according to Houston Food Finder. Meanwhile, the restaurant space will now become a fifth location of local burger empire Christian’s Tailgate Bar and Grill. 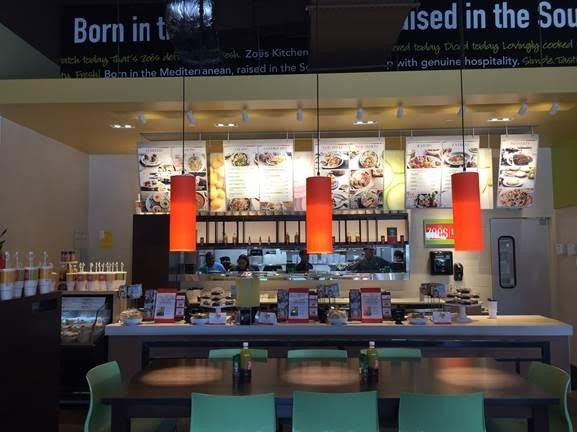 Inside Zoe's Kitchen in Westchase.
Photo courtesy of Zoe's Kitchen
Zoe’s Kitchen is opening a Westchase store at 2550 Citywest on September 14. The restaurant will accept monetary donations for the American Red Cross and will match a portion of the donations until September 30. The fast casual chain serves fresh, Mediterranean-inspired cuisine.

Cliff’s Grill, 6605 S. Main in the Medical Center, known for its hamburgers, is back open after receiving some flood damage, according to its Twitter page.

Another Houston institution, Sylvia’s Enchilada Kitchen, 1140 Eldridge reopened on September 12. The restaurant suffered flooding damage from Harvey and was closed for more than two weeks. It’s back to serving its full menu and Enchilada Queen, Sylvia Casares, plans to reschedule her popular cooking classes soon.

Buy the Wine Glass, 19620 Kuykendahl in Spring, has rescheduled its “ '90s R&B Day Party,” originally planned for August 26 (something else was going on then — like, a hurricane), to September 16. The event will feature the Ground Level Music band and the Fleur de Lis Eatery Food Trailer.

All the Crave has personal-sized cheesecakes such as banana pudding.
photo by Marlene Farmer
All the Crave Cheesecakes is relocating from 17527 Huffmeister to 11901 Barker Cypress in mid-October, according to Community Impact.The cheesecake boutique serves pretty, single-serving cheesecakes in a variety of flavors.

Willie’s Grill and Icehouse raised $134,145 for the American Red Cross by donating 20 percent of its sales this past Labor Day weekend. The donation is earmarked for Harvey Disaster Relief and the funds will stay in Southeast Texas to help families in local communities. Willie’s has 16 locations in Texas.

Hasta La Pasta, 6915 Cypresswood, is closed temporarily because the restaurant received three feet of water during the flood. According to Community Impact, owner Alan Smith hopes to reopen in November after extensive repairs are made. Smith had many volunteers help to remove damaged items from the restaurant and says, “The response for help has been heartwarming.”

In the same shopping center, several other businesses were dealt a heavy blow from Hurricane Harvey. Rao’s Bakery Coffee Cafe, 6915 Cypresswood, is also closed for repairs. The Champions location is one of four bakeries owned by Jack Tortorice, two of which are located in Beaumont and thankfully survived Harvey’s wrath.

Gringo’s Mexican Kitchen, 6925 Cypresswood, was also badly flooded and is closed for demo and repairs. There is no opening date as of yet. The owners recently opened a new Gringo’s at 30420 FM 2978 in the Woodlands on August 22.

Around the corner, the groovy pizza place, Mellow Mushroom, 16000 Stuebner Airline, suffered a similar fate and hopes to rebuild as soon as possible. According to its Facebook page, there have been a lot of volunteers helping, many of them loyal customers.

Bullritos next door is also closed for repairs.

Another hard-hit Champions restaurant, Perry’s Steakhouse and Grille, 9730 Cypresswood reopened September 11. Perry’s has created a three-course menu for $45 with $5 going to the J.J. Watt Harvey Relief.

If you must have hummus, you must at Mary'z Lebanese Cuisine on Washington.
photo by Troy Fields
As if Hurricane Harvey wasn’t enough, two Houston businesses suffered fire damage over the weekend. Lebanese Cuisine, 5825 Richmond, burned to the point of tear-down status on September 9, as reported by the Press. They hoped to rebuild, but it could take months due to the extensive damage. The second location of Lebanese Cuisine at 4500 Washington is still open to serve those craving hookah and Mediterranean dishes. Go support them with your business.

There was also a fire at the former Royal Oak Bar and Grill in Montrose, which was soon to be replaced by Shawn Bermudez’s new concept, Present Company, 1318 Westheimer. According to CultureMap, the business will not open in October as scheduled. Bermudez said, “The damage is pretty severe and will take me that much longer to open...I promise this place will not disappoint.”

The crew of volunteers working at the Midtown Kitchen Collective to prepare thousands of meals and sandwiches for Hurricane Harvey victims is passing the baton to Second Servings, a charity which rescues prepared food from restaurants and events, according to Houstonia. Jonathan Beitler of Barrelhouse Media and other industry professionals have donated numerous hours, often while working in their own restaurants or jobs, to make meals with the abundance of donations from farmers markets, food distributors, and grocery stores. Beitler says they have transitioned all contracts to Second Servings.

Cat Nguyen of Republic National Distributing Company has created a Google Doc entitled, “Disaster Plan for Restaurant Communities” in English and Spanish and shared it with counterparts in Florida prior to Irma’s landfall.

That’s it for this week’s openings and closings. Here’s our monthly list (delayed due to Harvey) of everything that was reported open or closed in August.

Businesses Reported as Opening in August 2017: