Finding Their Feet: Presidio Has a Great Vibe, but the Kitchen Is Sorting Itself Out We swooned over the burger, an 80/20 mix of 44 Farms chuck cooked medium rare. Photo by Troy Fields
It’s just past 7 o’clock on a Thursday evening at Presidio in the Heights. On the patio out back, two guys in jeans and button-downs sit center stage, alternating turns as they play ’70s, ’80s and ’90s rock ballads like Bruce Springsteen’s “Hungry Heart” on acoustic guitar. A slight breeze helps to tame the early summer humidity as my friend Dee and I decide what to order from the evening’s menu.

“This is so perfect,” she says, taking in the surrounding scene — casual, bohemian, chicly clad twenty- and thirtysomethings, preppily dressed guys in polo shirts and shorts, and groups of friends and couples seated in communal fashion at wooden picnic tables. Dusk has begun to settle in, so that the sky shines a brilliant shade of turquoise-tinged royal blue even as string lights, hanging in a low arch just above the picnic tables, illuminate the entire tableau, imparting a warm, cozy ambience. On the side of the building, high above the treetops, the restaurant’s motto is painted in bold white lettering: “For Any Occasion.”

Presidio was bound to have a great patio. If there was one thing you could predict about this latest venture from Charles Bishop, who is also behind the popular Liberty Station, Cottonwood and Southern Goods, it was that the patio was going to be one of its highlights.

The rest of Presidio was more unpredictable. Originally announced as a concept called 60 Pioneers, it was supposed to have been a joint venture between Bishop and Lyle Bento of Southern Goods, until the two became embroiled in a lawsuit and the project went south.

Moving forward without Bento, Bishop relaunched the space as Presidio, tapping Adam Dorris of the critically acclaimed Pax Americana in Montrose as the consulting chef. A few months in, it was announced that Dorris would part ways with Pax Americana to helm Presidio full-time.

The vibe at Presidio will remind you of everything cool you love about joints in Austin; it’s at once a neighborhood watering hole and a cool-kid hangout spot. Canary-yellow bike racks greet you out front. Vertical columns made up of herb-filled planters on the exterior wall evoke a farm-to-table feeling.

Inside there’s an entire wall filled with decoupage made from old books about Texas. In the unisex bathroom, a giant, tub-shaped, white utility sink, complete with creaky iron faucets, exudes as much Southern charm as the individual stalls, which are tiled in a pretty, artisanal, pale-blue pattern.

Dark-stained, handcrafted tables and white farmhouse chairs, washed concrete floors, and a bar with a window that opens onto the patio create a space that feels like it could be a modern-day Cheers.

But where the vibe is totally on point at Presidio, the food can be hit-or-miss. My first visit, unfortunately, was largely a miss. I don’t know what happened, but of the five dishes we ordered, four had notable problems.

The grilled melon, one of Dorris’s signatures from his Pax Americana days and the first thing to hit our table, set the tone for a series of disappointments. My companion’s first comment, when he bit into it, was, “This is weird.” Taking a bite, I understood exactly what he meant: It was weird.

The cantaloupe had been cooked to the point where it had lost all firmness and was little more than mush. But it was more than that. The candied hazelnuts and feta — the same ingredients that Dorris had used to great effect in the Pax Americana version of this dish — were thrown in with a bunch of new ingredients — pepper jelly, chopped chives, sage and a lot of dill —that were jarringly incohesive. If the aim was to create a better version than what had been done at Pax, it seriously missed the mark.

An order of heirloom carrots, likewise, needed work. “They blanched all the flavors out of the carrots,” my companion said plaintively when he tasted them. Described on the menu as confited and roasted, the carrots looked the way vegetables do when they are boiled for too long: All the color had been bled from them, so that what was left were pale, tan-colored, squishy-textured roots that had no bite.

Sweet potato beignets were forgettable, the crisp texture you would have wanted on the exterior not quite there. A scallop crudo was plated prettily but was unpalatable.

Thank goodness for the grilled napa cabbage, which was the only glimmer of Dorris’s talent that we experienced that day. Served in two long ovals underneath a blanket of freshly grated, snowy-white parmesan cheese, the Caesar salad-esque preparation, with white anchovy, grilled lemon, honey crisp apple slivers and a green goddess dressing, was not only creative but delicious.

We left that night without ordering entrées or dessert. In addition to the lackluster cuisine, the dining room was so uncomfortably hot that we really couldn’t have enjoyed the food even if we wanted to. My skirt was sticking to my legs on the seat of the chair. My companion said he could feel the perspiration dripping in rivulets down his back. The ice melted almost immediately in our water, and our drinks were lukewarm before our first plate had arrived.

Which is why I was so pleasantly surprised by the wonderful time Dee and I had on the patio the following week. It helped that the weather was milder, to be sure, but where the kitchen couldn’t seem to find its feet on the first visit, the execution, on the whole, was much better on the second.

An appetizer of spring peas with fresh ricotta, served with toasted bread and adorned with edible purple flowers and slivers of decorative radish, was creamy, balanced and thoroughly enjoyable. We both swooned over the burger we ordered. Made of a house-ground, 80/20 mix of 44 Farms chuck, the thick-cut patty was cooked to a juicy, oozing, full-of-flavor medium rare. Butter lettuce, bright red tomato slices, bacon jam and grain mustard were added in good proportion, and the challah bun was dense yet soft and plush, with the right amount of give. The burger is offered in one-patty or two-patty configurations, and we found the single patty to be plenty. It was a formidable sandwich, made all the more so by medium-size hand-cut fries, the kind that retain a crisp long enough to keep you happily munching for the duration of the meal.

In fact, the first three dishes we had were good enough that we didn’t let the two dishes we didn’t like — a “Big Ass salad,” an overfilled bowl of greens with tortilla strips on top in which we ended up picking out chunks of tomato and blueberry while leaving the rest, and an entrée plate of tri-tip that was sinewy and lacked seasoning — define our experience. 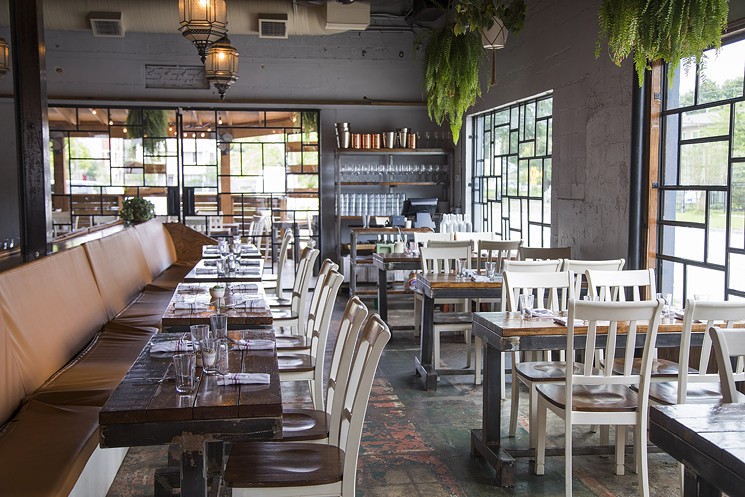 There’s an entire wall filled with decoupage made from old books about Texas.
Photo by Troy Fields
Presidio has potential, but at this point, what it has going for it is more about the look and less about the substance. Four months out, it’s clear that the kitchen is still grappling with what it wants to be. Dorris is an excellent chef, but he can’t seem to let go of what worked at Pax Americana, so that the resulting menu is sort of a Pax Americana redux, only not anywhere near as good.

Does that mean you won’t have a good time at Presidio or that you won’t enjoy the experience? Not necessarily. It means that if you go, you should go knowing what its strengths are and plan accordingly: Get there early enough to snag a spot on the patio, and order the burger or something uncomplicated, like the chicken wings. Have a beer or a cocktail, and bring friends.