Openings and Closings: Mademoiselle Louise, Rustika and The Roastery Open The L is for Louise, not Laverne.
Photo by Frederick Fortin

Mademoiselle Louise, 1725 Main, opened les portes  January 7 on the bottom floor of the Sky House apartments. Frederick Fortin, from Normandy, France, left his career in telecommunications to study the art of patisserie at prestigious schools such as Ecole Nationale Superieure de la Patisserie in Yssingeaux and Ecole de Boulangerie Patisserie in Paris. Trips to Texas over the past 15 years to visit family and friends led him to bring his family to Houston in 2017, according to French Morning. 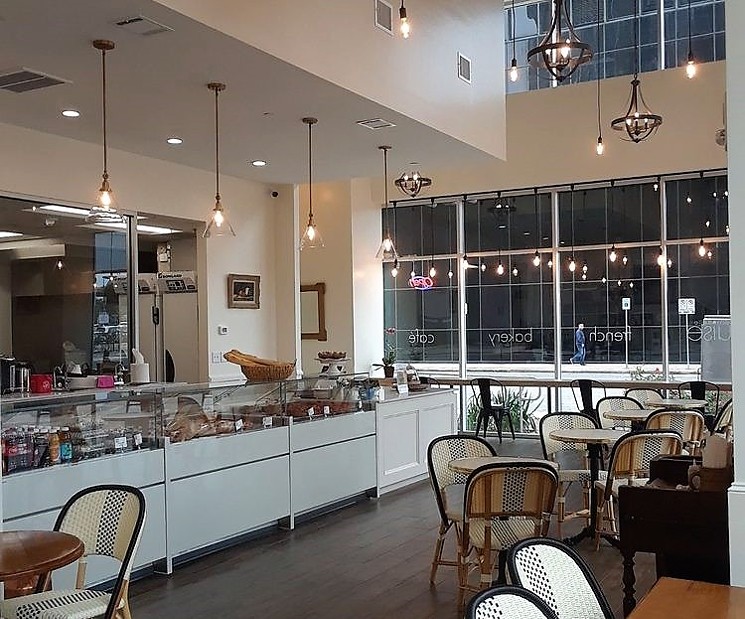 Mademoiselle Louise brings French pastries to Downtown Houston.
Photo by Frederick Fortin
The new cafe is white and bright and features a mix of wicker bistro chairs, counter seating and wrought iron chandeliers. While the interior will tempt office workers and downtown visitors for a coffee and a freshly-made croissant, the variety of made-from-scratch breads will be available to take home for dinner. Deciding between a baguette, focaccia or ciabatta will depend on your fancy that day.

There are also sandwiches and salads, plus a variety of sweets like tarts, pain au chocolat and madeleines. There are treats americain like cupcakes and blueberry muffins, as well. The coffee comes from Java Pura. 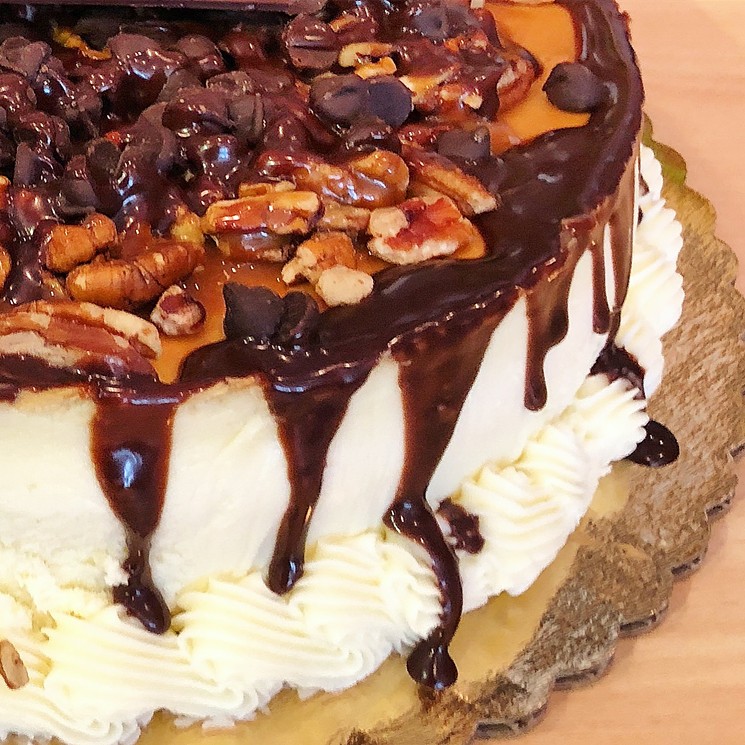 This could make a person pass out from pleasure.
Photo by Marco Reznick
Rustika Cafe and Bakery, 3227 Highway 6, began its soft opening January 25 and a grand opening is planned for February 1. The Sugar Land location makes the third in the bakery franchise for husband and wife duo, Francis and Leonardo Reznick, who were born in Mexico City and are of Jewish Eastern European descent. 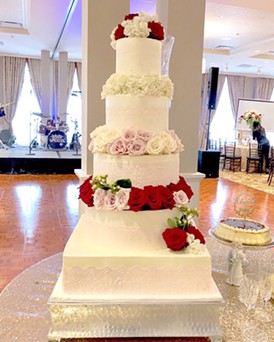 Rustika creates stunning wedding cakes.
Photo by Marco Reznick
They began the business in 1994 and it has now become a family-run effort with son Marco Reznick running day to day operations and expanding with new locations. The international influence shows in the variety of dishes available from matzo ball soup and tacos to crepes and cheese blintzes. However, menus vary at each location, which includes a cafe in downtown Houston tunnels and one in West University, so check them out online first if you have your heart set on a specific item.

Besides being a comfortable spot for breakfast and lunch, the bakery creates wedding cakes and delicious desserts. In 2014, the Houston Press listed them as the best cakes in Houston. The cakes are made with no preservatives.They also provide catering services for corporate events and weddings.

BYOB is allowed with a $10 corking fee per bottle of wine and $5 per six pack of beer. There is also a kids menu.

A fourth location is planned for the Friendswood area soon. 
The Roastery Coffee Kitchen, 2300 N. Shepherd, opened January 30 on the second floor of the Heights H-E-B grocery store. It is the first location within the 610 Loop.

The coffee beans are Fair Trade and grown with sustainable farming practices. The menu is chef-driven with sandwiches, salads, made to order mini donuts and fresh-baked pastries. There's also gelato. Mini-donuts are made to order at The Roastery.
Photo by Jason Giagrande
The coffee shops feature modern decor with marble counters, stained concrete floors and bar-high tables, along with flexible seating areas outdoors and at community tables. Though the cafes are attached to the H-E-B stores, they have their own entrances.

The next location will open in early spring at the 5895 San Felipe. There are several more planned for 2019.

Soul Food Vegan, 2901 Emancipation, had its grand opening January 12. If you think that Cajun comfort food and Southern traditional favorites could never be a tasty without meat, think again. This new vegan eatery is offering up boudin balls, mac n' cheese, collard greens and cupcakes, all without animal products. And vegans and non-vegans alike are enjoying the food.

While some of the food is fried, there are salads and dishes like jambalaya and dirty rice as well, plus a few pastas such as cashew Alfredo and Cajun pasta melt. And cauliflower steak is on the menu. That brassica is still trending.

Liefs, a Dutch vegan restaurant, is on track for a June 2019 opening, according to Eater Houston.The new concept comes from husband and wife Fem and Thomas Massink from Amsterdam, who originally came to Houston for the oil and gas industry.

The menu is still being tweaked, but expect items like veggie-packed power bowls and poffertjes, a Dutch pancake served with sugar.

La Argentina Gelato, 6363 San Felipe, opened January 19. This is the second location from founder Daniel Mansilla and daughter Florence Mansilla.  Besides ice cream, gelato and frozen yogurt, there are sandwiches and empanadas  made with ham and cheese, chicken or ground beef. There are sweets like macarons and alfajores, a traditional South American cookie.

Mansilla and family immigrated from Rosario Argentina to Maracibo Venezuela in 1982. In 1985 through 2003, they operated a gelato cafe in Maracibo.

Milk & Sugar Creamery, 1848 Westheimer, began its soft opening January 18 and had its grand opening January 25, as reported by Eater Houston. The ice cream shop features house-made ice cream and creative mix-ins. It is open Monday through Thursday and Sunday, from noon to 9:30 p.m. On Friday and Saturday, it opens from noon to midnight, so you can top off an evening out with a fresh-made waffle cone of yum. Thai tea seems to be a favorite flavor.

Wings are everywhere in our big city.
Photo by Sam Elsaadi
Big City Wings,1522 Kingwood Drive, opened January 25. The Houston-based wings eatery has seen a lot of expansion in the past year with a recent opening in Spring and five other locations in Pearland, Houston and Katy. An eighth location is slated for March 2019 at the Grand Parkway and Rayford Road.

The sports bar is family-friendly and offers all kinds of favorites like burgers, wings and nachos. And beer. Go coastal at Capt. Brad's Coastal Kitchen.
Photo by Brittney Aplin
Capt. Brad's Coastal Kitchen, 24435 Tomball Parkway, opened January 28. The new seafood restaurant comes from Brittney Aplin, whose father Brad Aplin, founded Bluewater Seafood in Houston, which has three locations. Brad Aplin came from a commercial seafood family and worked along the Gulf Coast as a commercial shrimper, crabber and oysterman. Sadly, he passed away from cancer in May 2017. The new restaurant is named for him.

There are the usual fried favorites of shrimp and catfish, along with char-grilled oysters, grilled fish entrees (with tasty seafood cream sauces) and po-boys. Starters like fried alligator and gumbo get the party started, but it's the crawfish pistolette that makes this writer's taste buds happy. 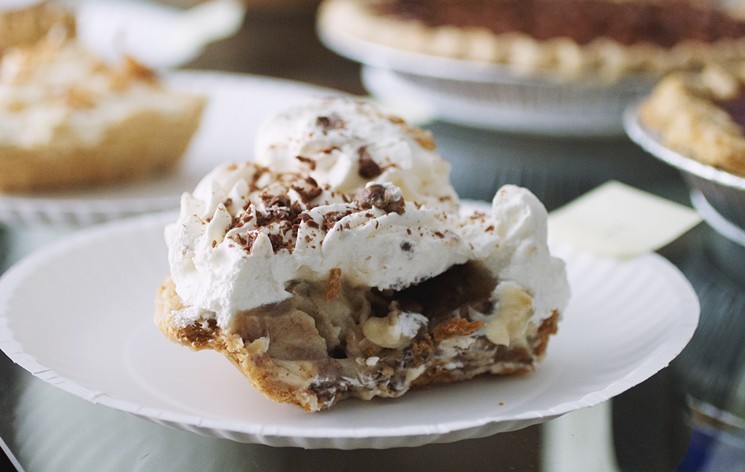 Bayou Goo is the pie to do at House of Pies.
Photo by Ericka Kwee
House of Pies, 1330 Lake Woodlands Drive,  is the fourth location of this Houston diner. It has served pies and home-cooking since 1967. Many a Houstonian has spent a late night soaking up an evening's worth of booze with biscuits and gravy in one of its vinyl booths. I was well into my thirties before I ever ate at a House of Pies before midnight.

The Woodlands location is not open 24/7 as of yet, but it has been packed with folks happy to have a closer location in their neck of The Woodlands. They too go gaga for the Bayou Goo.

Mel's Seafood Shack, 2521 N. Durham, has closed permanently, according to The Leader News. The food truck started serving up boiled crawfish three years ago, with sisters, Melissa and Melinda Faust, originally from Louisiana, at the helm. Unfortunately, they can no longer continue as a food truck and a brick and mortar is not in the cards for now. Melissa Faust headed back to Louisiana, while Melinda Faust continues with her full time job in the oil and gas industry.

With crawfish season in high gear, that's a bummer for residents in the Heights.

Stuttgarden Tavern, 4002 N. Main, closed January 20. This was the fourth location of the German-inspired restaurant and bar, which has three other locations in the Galveston area. Co-owner Derek Groenwold told The Leader News that " All other (restaurants) will remain open...All of our other locations are doing well."

McAlister's Deli, 1001-D Avenida, has closed. While the fast-casual sandwich shop, which started 40 years ago in Oxford, Mississippi, has been very successful, with more than 400 locations across the United States, this location at the George R. Brown Convention Center just never seemed to live up to the chain's standards. Its Yelp reviews were abysmal and this writer personally knows it never seemed to be able to meet the demands of its customers, many of them visitors to our fair city. Another Avenida tenant, Bud's Pitmaster BBQ met the same fate in October 2018.

Gone are the days when desperate convention attendees scoured the EaDo area looking for a decent bite to eat. With new arrivals like The Rustic and Rodeo Goat, convention area restaurants need to up their game to compete.

Cane Rosso, 4306 Yoakum, closed December 30
Canino Produce, 2520 Airline, closed January 21
Carmelo's, 14795 Memorial, closed temporarily January 23
Dream Tacos, 3773 Richmond, closed January 6
Frenchy's, 3919 Scott, closed January 4
Hickory Hollow, 101 Heights, closed January 13
Panda Garden, 5534 Wesleyan, closed for relocation, January 23
Pax Americana, closed January 12
Sud Italia, 2347 University, closed January 1 for rebranding
KEEP THE HOUSTON PRESS FREE... Since we started the Houston Press, it has been defined as the free, independent voice of Houston, and we'd like to keep it that way. With local media under siege, it's more important than ever for us to rally support behind funding our local journalism. You can help by participating in our "I Support" program, allowing us to keep offering readers access to our incisive coverage of local news, food and culture with no paywalls.
Make a one-time donation today for as little as $1.