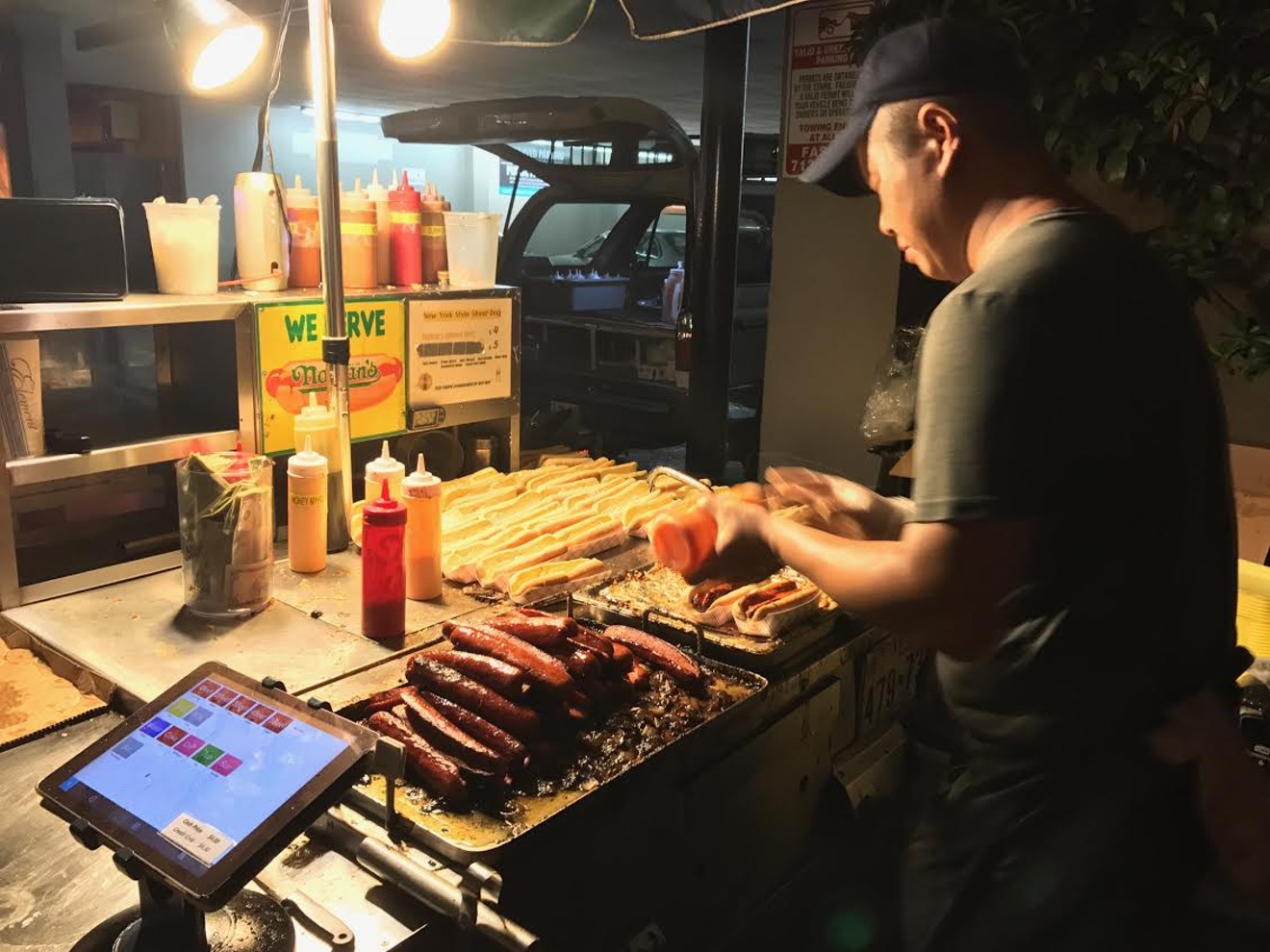 The cart was started about five years ago by YoYo, whose real name is Danny Kim. He left his family's business in Los Angeles to come to Houston, where he also has relatives, with the idea of creating a hot dog style that could be known as Houston's own. He spent some years working in the restaurant industry here, including as a sous chef at Ra Sushi. With family in Chicago, Kim had researched what made that city's hot dogs so special, and also turned to the stands of New York for inspiration.

"He really wanted to infuse Asian ingredients into it and invent the Houston-style hot dog," Kim's partner Damion Loera tells the Press, noting that Kim is of Korean descent. 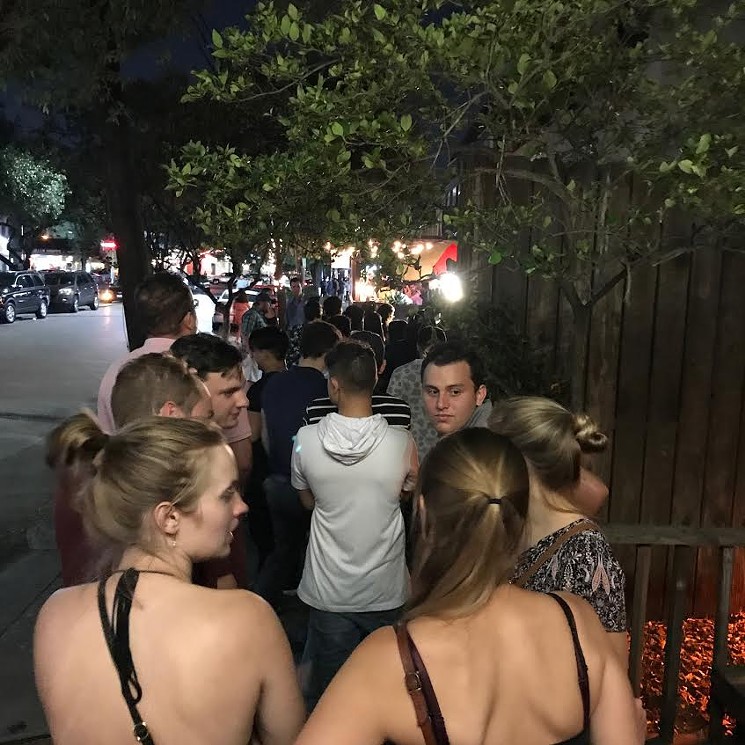 At 11 p.m. on a Friday, the line is already deep.
Photo by Gwendolyn Knapp
Five years later, customers line up a hundred deep on Friday and Saturday nights to get a taste of this wild, decadent Houston specialty.

"For Danny, it definitely fits his character," Loera says of the YoYo dog. "He's sort of out there."

The later it is, the longer the line. The cart stays open until 3 a.m., catering to college students and revelers who are out after last call. 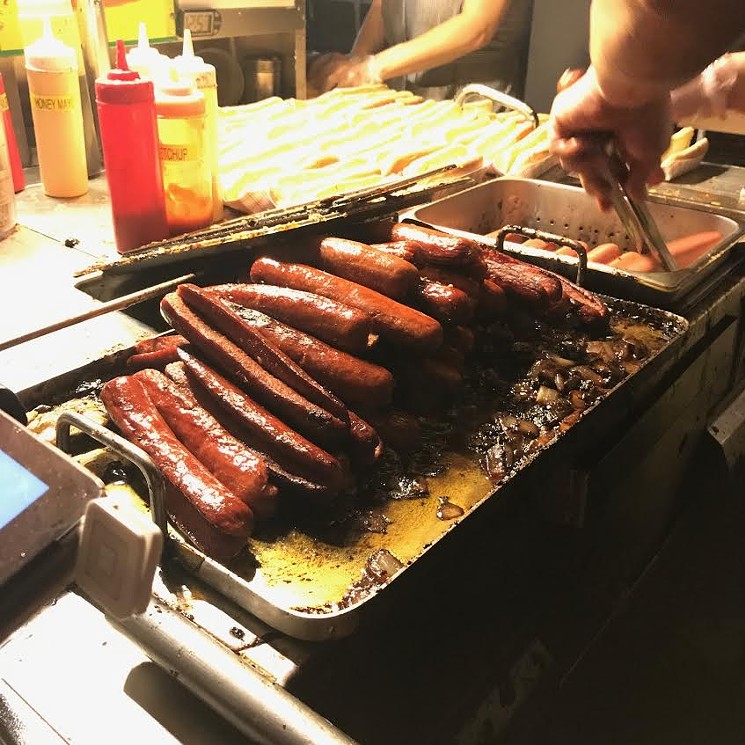 Griddled onions and salty dogs.
Photo by Gwendolyn Knapp
The way Kim batches and prepares his hot dogs is pretty unique, considering he works from just a small stand in the middle of the sidewalk, handling numerous customers, ingredients and the griddle in a seamless fashion. It's a dance, really, best performed with his wife, who helps Kim build the hot dogs four dozen at a time.

"it is crazy for a cart," Loera says. "That's why the line is so long. Whenever you're in the food industry, you learn how to manage food and the flow of it. I mean, three different things — the toasted buns, the hot dogs, the onions, are all done on the same griddle."

The buns get a layer of cream cheese, which one has to imagine was designed to go on first to keep the bread from becoming soggy. The beef dogs, which, ingeniously, appear to marinate in the previous batches' meaty juice before hitting the grill, are layered onto the buns with a sprinkling of pepper, and then comes the show.
click to enlarge

Building dogs at YoYos.
Photo by Gwendolyn Knapp
First, the curry ketchup, then the spicy mustard. Next, a creamy layer of sweet grilled onions and a crisp layer of salty, fried onions. The dogs are then topped off with a hit of the sweet honey mayo, which is apparently inspired by a sauce common in sushi restaurants, along with the sriracha.

Speed, agility and patience factor into running a high-volume cart like this.
Photo by Gwendolyn Knapp
click to enlarge 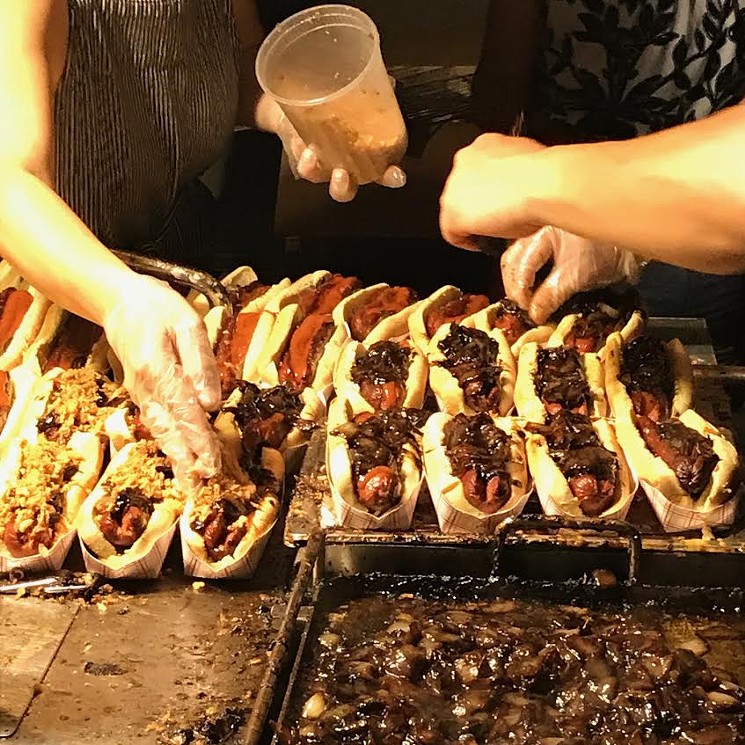 Onions on onions.
Photo by Gwendolyn Knapp
How Kim remains as calm and downright cheery as he does while a zombie-level infestation of hungry, drunk people close in on him, wiping their sweaty paws all over the iPad register, is anybody's guess. 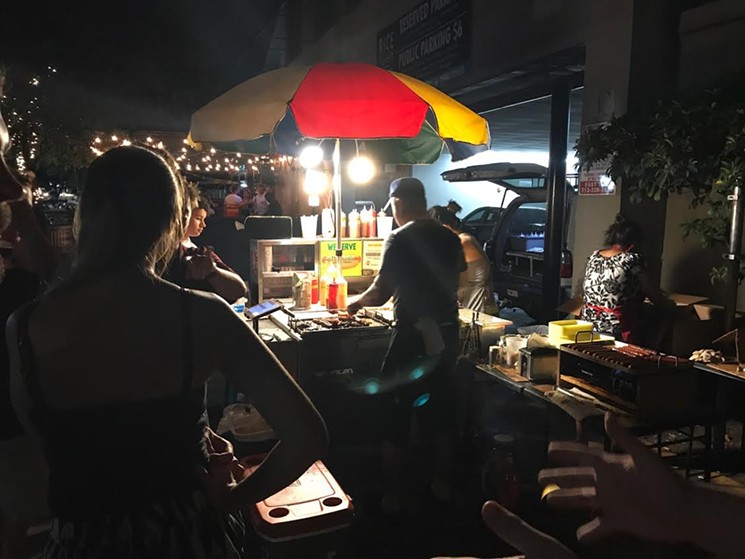 So close, yet so far away.
Photo by Gwendolyn Knapp
When you get your own hands on a YoYo's hot dog for the first time, served in small paper holders atop the ubiquitous styrofoam tray that accompanies most raw meat at the grocery store, it's best to drag it back into a dark lair, like the Ginger Man. There, you can wash down the salty, sweet, crunchy, tender, crispy and absolutely rich and wacky drunk food with an ice cold brew while talking about the crazy experience with friends. If you can ingest more than one: kudos and for shame. 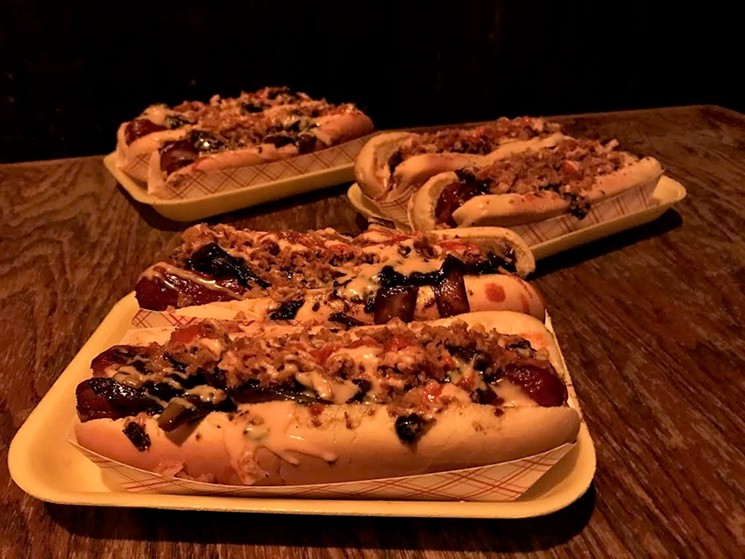 Hot dogs don't photograph well in a bar, but they do taste incredible.
Photo by Gwendolyn Knapp
Today Kim has about eight people on his team, including Loera, the former owner of food truck Kurbside Eatz, who closed that business after five years to revamp the truck into the new YoYo's mobile hub, which hit the streets in August. They also operate a cart in Midtown. All of these mobile locations serve just the hot dog, though the truck will likely add fries and a vegetarian option in the coming months, perhaps a tofu or black bean hot dog. The food truck and Midtown locations also have daytime hours.

There are also talks of eventually expanding into a brick and mortar in the future.

"Definitely we want to open up a brick and mortar," Loera says. "That's our ending goal. Maybe a kiosk somewhere in the Heights, but we haven't thought about expanding the menu really. People want the original. It has that twist with the texture and different flavors. That's all they want."

Correction: This article previously mentioned that the hot dogs are marinated in pork fat, a mistake that we regret. YoYo's hotdogs are Kosher all-beef franks.