Nola West: Finding the Heart of Creole Where You Least Expect It, in Houston 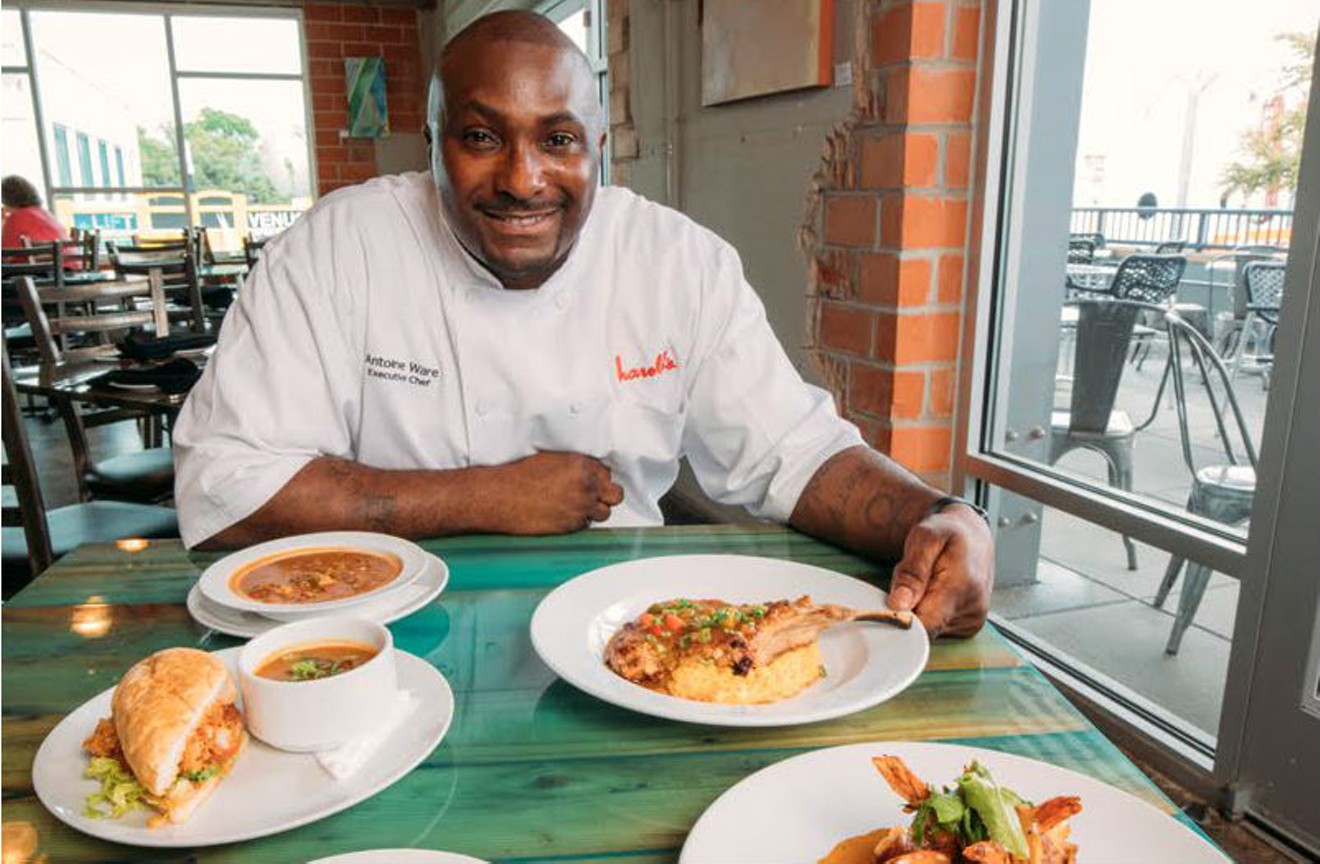 Chef Antoine Ware serves up his take on grillades and grits at Harold's in the Heights. Photo by Troy Fields 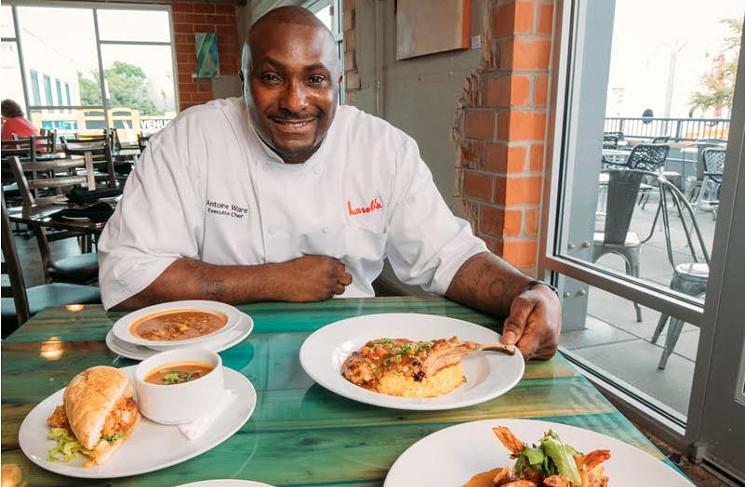 Chef Antoine Ware serves up his take on grillades and grits at Harold's in the Heights.
Photo by Troy Fields
Houston is a city that loves it some gumbo, po-boys, charbroiled oysters and Hurricanes. That’s obvious. But how much do Houstonians actually know about New Orleans cuisine? While Cajun traditions run deep here, Creole also seems to have a softer, quieter presence in the Bayou City — it’s one element that I find really intriguing. Though it comes with caveats.

“They can’t do red beans,” a New Orleans native, whom I ran into at the Houston Livestock Show and Rodeo, informed me. “They can do po-boys and gumbo, but not red beans.” And this warning, according to Harold’s in the Heights chef Antoine Ware: “You never get into a gumbo conversation with somebody here. It just goes on and on.”

I’ll be honest. Eating Creole outside of New Orleans can be scary. A particularly terrible grilled mahi “po-boy” I ingested in Cocoa Beach, Florida, in 2013 still haunts me to this day, as does an Atlanta bar gumbo from late 2016. It’s easy to destroy New Orleans’s classics, because understanding them in the first place can be a challenge.

Sorry, Cajun and Creole Aren’t the Same Thing
Perhaps the most prevalent misconception about Louisiana’s unique foodways is the belief that Creole and Cajun cuisine are the same thing. A simple search for Creole cuisine in Houston via Google produces 28 restaurant results, as opposed to 19 for Cajun. But under the heading “Cajun/Creole” on Yelp, more than 360 restaurants are listed for the greater Houston area, which is pretty astounding, but what exactly does “Cajun/Creole” even mean?

In the simplest of terms, you can think of Creole as city food and Cajun as country food. “One of the great things my mom always said is it’s the difference between eating in Paris and Lyon,” Alex Brennan-Martin, proprietor of Brennan’s of Houston, says. “They’re both French food, but Creole is a little more stylized and refined.”

But even that is too superficial a definition. Both styles of cooking share a French heritage, though the Cajuns descended from Acadians, who were cast out of Canada for religious beliefs and then settled in the wilds of south Louisiana, while Creoles tended to be a wealthier mix of French and Spanish settlers in New Orleans whose cuisines morphed into America’s first melting pot, with Native American, West African, English, German and Italian influences in tow.

In essence, both cuisines were directly influenced by the access early settlers had to local food and ingredients, which is why Creole tends to be a bit fancier — shrimp rémoulade and trout meunière — and Cajun a bit heartier — one-pot stews and boudin. Though some signature dishes overlap, they tend to be different in preparation, such as gumbo and jambalaya, to which Creole chefs might add tomato or hold off on rice, whereas a Cajun chef would likely double down on gamey meats or a darker roux.

Within the realm of Creole itself, you have different factions as well. There is high-end French Creole as seen at longtime fine-dining institutions such as Antoine’s and Galatoire’s, where dainty soufflé potatoes still reign as king. There’s Creole soul food, stemming directly from New Orleans’s strong African-American cooking tradition, which you can find at Treme institutions like Willie Mae’s Scotch House and Dooky Chase. Creole-Italian, as cultivated by the city’s immense Sicilian population, specializes in stuffed crab and mirliton — which is a squash-like vegetable native to Louisiana — and spaghetti with red gravy and cucuzza (also a squash). Much like the Viet-Cajun cuisine of Houston, New Orleans’s Vietnamese presence, which isn’t as big as the one here, but certainly just as important, has directly affected its cuisine as well, with chefs now fully embracing Southeast Asian flavors as another defining element of Creole.
In the 1970s and 1980s chef Paul Prudhomme put Cajun cooking on the map, at Creole institution Commander’s Palace and at his eponymous eatery K-Paul’s in New Orleans, of all places, with the advent of blackened redfish, which “almost wiped out a species of fish,” according to Brennan-Martin, who also calls Creole and Cajun “hopelessly intertwined.”

Cajun-tinged Creole dishes directly influenced New Orleans chefs and diners’ tastes for generations to come, but for New Orleans natives (especially home cooks), Cajun flavors still weren’t a thing. “I never had blackened redfish until I was an adult,” chef Ware notes. “I was like, why is he burning the fish?”

In the years since Katrina, New Orleans has seen a wealth of restaurants opened by Cajuns, including Donald Link (Cochon, Peche, Herbsaint), Isaac Toups of Toups Meatery and Nathaniel Zimet of Boucherie, which is named after the heart and soul of Cajun cooking: whole-hog butchery. But honestly, there seem as many Cajun influences here in Houston. Even at Brennan’s of Houston, where chef Danny Trace makes lamb boudin or has his in-house butcher break down whole hogs to make sausage and terrines, that’s a huge new advent for the classically Creole institution.

For a taste of the Cajun-Creole conundrum, Trace also is a fan of chef Graham Laborde, who is a Lafayette native (i.e., Cajun) but has trained in New Orleans’s kitchens, including Commander’s Palace, and now shows off his Louisiana upbringing at his ode to I-10 down the road, Bernadine’s, 1801-B, North Shepherd. 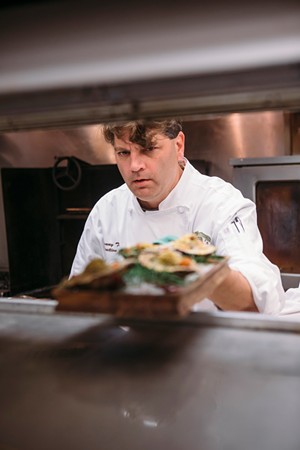 Chef Danny Trace hard at work in the Brennan's kitchen.
Photo by Troy Fields
The History of Brennan’s: It’s Complicated

Most people think Brennan’s of Houston is directly related to the original Brennan’s in New Orleans.

Well, it kind of is, but in order for you to understand, let’s break down the Brennan family. First, there was the patriarch, bar owner Owen Brennan, who opened his eponymous restaurant, Brennan’s, in 1946. In 1956, it then moved to its current address, 417 Royal Street, where the restaurant still resides today. After Owen Brennan’s passing, his father, siblings and children inherited the restaurant and a family rift occurred while they were disputing the future of the business. By the late 1960s, several of Owen Brennan’s children, including family dynamo Ella Brennan, were operating Commander’s Palace in the Garden District, and also opened Brennan’s of Houston, the building of which, oddly enough, is a direct replica of 417 Royal, which was designed by architect John F. Staub, years before the Brennans ever bought it.

The Commander’s Palace and Brennan’s of Houston faction of the family has been responsible for some of America’s most remarkable dining achievements, from the discovery of chefs Paul Prudhomme and Emeril Lagasse to producing certainly the most famous turtle soup recipe in existence. Ella Brennan was -responsible for ushering New Orleans’s hospitality into the modern age, as well as potentially creating Bananas Foster by accident, but it was her son, Alex Brennan-Martin, at Brennan’s of Houston who launched one of the first chef’s tables in America.

He operates Brennan’s of Houston, while his sister Ti Martin and cousin Lally Brennan now run its sister restaurant, Commander’s Palace, among other upscale eateries in New Orleans and elsewhere.
Meanwhile, the original Brennan’s is currently making a major comeback under the new ownership of Ralph Brennan (Lally Brennan’s brother), who saved the restaurant from complete demise after his cousins Pip and Ted Brennan steered it into bankruptcy in 2013.

For a taste of the Brennan family’s famed turtle soup, head to Brennan’s of Houston, 3300 Smith, which uses the same recipe as Commander’s Palace, though with a slight Texas twist — it’s a lighter, brighter soup with more lemon.