Not Your Pre-Pandemic Salad Bar 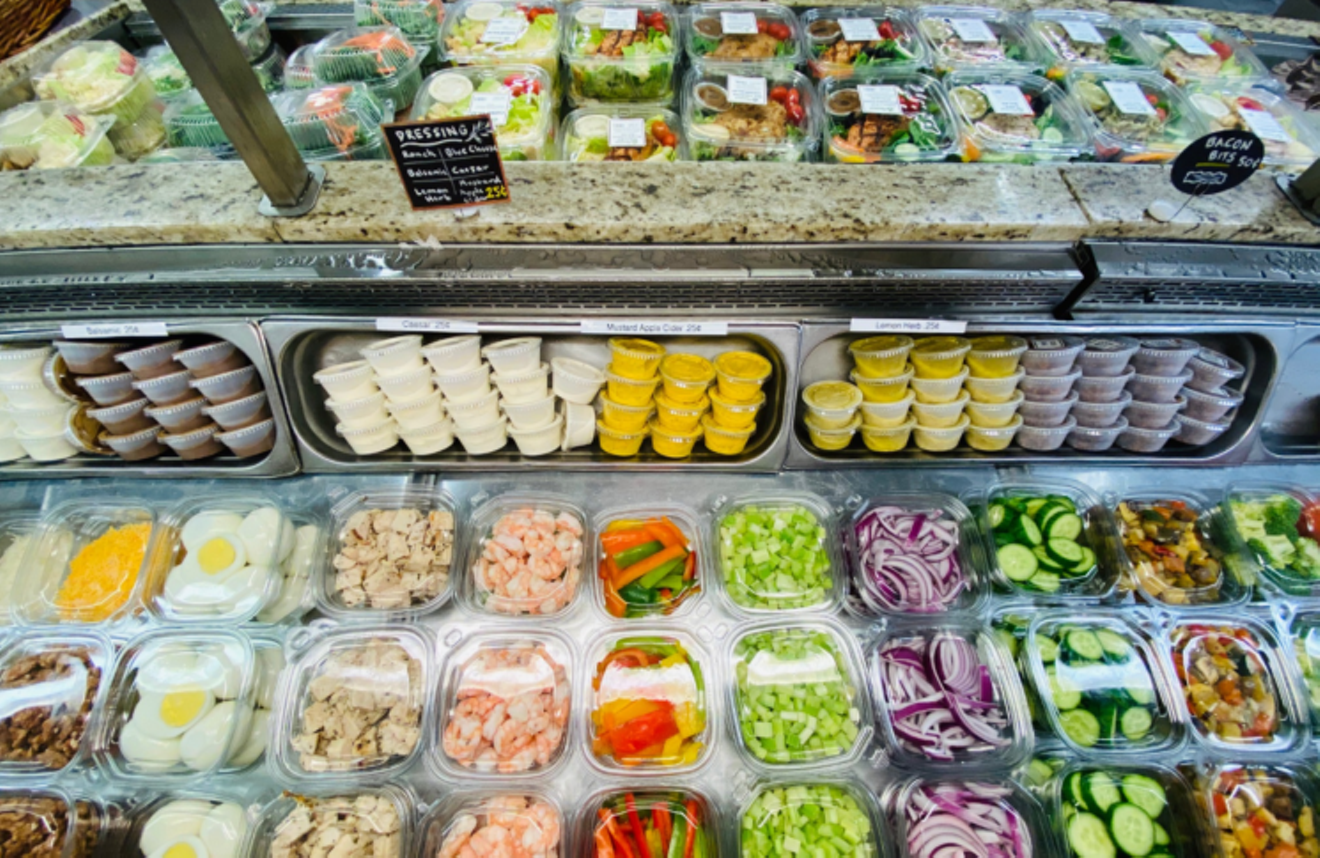 At Phoenicia, guests can still design their one salads, but the ingredients are packaged separately now. Photo by Haig Tcholakian/ Phoenicia Specialty Foods

The days where you could go full When Harry Met Sally Meg Ryan on your salad bar—personally selecting each and every tomato—may be gone. Limiting high-contact surfaces is key in preventing the spread of COVID-19, and standard salad bars are rife with them.

In light of Texas’ health regulations for restaurants, Houston’s salad bars have needed to transition from self-serve style to employee-served and prepackaged styles.

While there is currently no information that the novel coronavirus is transmittable through food, it can be spread through commonly touched surfaces, said Christopher Sparks, chief sanitarian of the Houston Health Department.

“When you’re talking about self-serve salad bars and self-service stations, we want to try and promote the least amount of touching of those common surfaces,” he said. “If they want to serve people, they need to have employees serving. That way you limit the number of individuals who are touching those commonly touched surfaces, and we avoid the possible transmission through that.”

The state regulations mandate a restaurant’s employees serve the food for any buffet offerings. And a salad bar would fall into that category.

Salad bars can also be redesigned by offering pre-packaged items, but Sparks said those should still be controlled by employees. The worry is that while choosing what they want, customers may go through the process of touching and picking up several items.

“Still keeping in place the procedure of allowing the employees to serve those prepackaged items would help with that concern that we have,” he said.

Some places like the Houston-based chain Salata were already aligned with the new safety standards pre-pandemic.

“We were a little bit ahead of the curve as far as COVID-19 and all the guidelines, because we have a staff behind the line that serves the guests,” he said. “While the guests can see the toppings, they don’t get to touch their toppings. So, everything is made for them by our team members with gloved hands and masks on.”

With sneeze guards already in place, the primary adjustment Salata had to do is making the additional toppings and beverage stations staffed by employees, rather than being self-served.

But other places have not had the same luck.

Another chain known for its salad concept, Sweet Tomatoes, recently closed all of its locations, including several in Houston. Unlike Salata, it operated under the buffet-style approach. In mid-June, the owner and operator of Sweet Tomatoes, Garden Fresh Restaurants, LLC, filed for bankruptcy and is liquidating its assets, citing the inability to survive the impacts of the pandemic and the health regulations for self-serve stations.

Taste of Texas also typically operates with a traditional salad bar buffet, said owner Nina Hendee. But the restaurant has transitioned to having plexiglass in front of its salad bar with the servers behind it.

“The servers are the only ones touching the items,” she said. “And they change gloves after every guest and sanitize all of the items.”

Hendee said the restaurant is simply following guidelines as the government issues them.

“Everything is prepackaged in its own plastic container, and our staff has gloves and a strict sanitation protocol,” she said.

Beyond having those premade items, Phoenicia also offers a prepackaged version of a pick-and-choose salad bar, where guests can select greens, toppings, and dressings, but everything is proportioned and prepackaged separately. It has also converted its extensive olive bar in the same way.

But the stations are not served by employees, and customers are allowed to pick out their own items.

“I think it’s more common knowledge that people are supposed to be respectful and not touch too many things if it isn’t necessary. It’s more an honor system in regards to that,” Tcholakian said. “Just like any product in a grocery store.”

And moving forward, with the longevity of the pandemic unknown, she foresees the adjustments being longer-term.

“In our lifetime, it’s the end of the salad bar,” Tcholakian said. “I would say it will be more the prepackaged type of options or full-service salad bars. This may be the end for a lot of salad bars.”

It also depends on how much customer habits will have changed after undergoing the pandemic and its effects, she noted. And after recent regulations, she thinks people will be resistant to a return to the traditional salad bar.
Which is something chief sanitarian Sparks also speculated.

“It will really depend upon on how many individuals are willing to make changes to our regular cultural approach to everyday life,” he said. “It needs to happen on both sides. Not only on us as individuals, but the self-service stations recreating themselves in a way where they can put measures in place.”
KEEP THE HOUSTON PRESS FREE... Since we started the Houston Press, it has been defined as the free, independent voice of Houston, and we'd like to keep it that way. With local media under siege, it's more important than ever for us to rally support behind funding our local journalism. You can help by participating in our "I Support" program, allowing us to keep offering readers access to our incisive coverage of local news, food and culture with no paywalls.
Make a one-time donation today for as little as $1.