"It was like this precious, precious gift was put in my hands. I was thinking please, please don't drop it. This was everything I wanted, to carry on in my mentor, my good friend's footsteps," Kate McLean says, cradling her hands together as she talked about her return to Tony's Restaurant and Catering after having left in 2017.

That mentor was Tony Vallone, the colorful restaurateur who owned and operated a number of restaurants over the years in Houston but it was his namesake, Tony's, that has withstood the test of time since its opening in 1965. Known for its authentic upscale Italian cuisine, it was also Tony himself, hosting and greeting customers that kept guests returning again and again. Tony Vallone passed away in September 2020.

We sat down with McLean to discuss her life with and without Tony's and her return to its famous kitchen.

Her career at Tony's began with a stint as sous chef after working in restaurants in Provence, France and Hawaii. When she was promoted to executive chef in 2013, not only was she still quite young but she was the first female chef to lead the kitchen at the venerable restaurant, which has served presidents, celebrities, royals and Houston movers and shakers for over 50 years.

Prior to Tony's death, McLean started hanging out with the Vallones again. "I knew I had to have Tony in my life. We kept in touch and spoke pretty regularly. We got to have a different version of the relationship that we had before."

Kate McLean cleans ducks for a meal.
Photo by Brian Brossa
We asked McLean what the impetus was for her to leave the executive chef job in 2017. She replied, "About six months before I left, I thought 'I need growth'.  The publicist at the time, Jeremy Parzen, was writing Tony's book. I had always wanted to be a writer. I pitched to Tony at the time that I would write as Tony, from the days when he was a line cook. I wrote Tony a chapter. It was the night of the 50th celebration, this monumental birthday. It turns out that wasn't the growth that I needed. I don't always have the answer about what I want to do in life, but I have a lot of faith. I started praying that spring."

McLean was ready for some time off. As most restaurant industry professionals know, the restaurant is not a nine to five job, especially for an executive chef. McLean admits that even on her days off, the wheels were always spinning. "Seven and a half years at that pace, I definitely wanted to take a break. I brought it up to Tony and he said, 'No, stay. We'll figure things out'. But, I just prayed. My body moved itself into the position that it was time to leave. It was the hardest thing I've ever done."

"I don't want to be known just as a chef. I want to operate in these different creative mediums and work hard at them. I see myself as doing lots of stuff."

Those different mediums include working as a bartender, restaurant consultant, podcast host and also as a writer here at the Houston Press. Eventually, McLean landed at Houston Food Bank, a gig that came about after an assignment McLean did for the Houston Press about a shooting in Sunnyside. As she was interviewing people about the incident, she realized that the nearby residents only had the convenience store for their grocery needs. That fact sent McLean on a journey of educating herself about food access. Before she knew it, she was running food distribution supersites at NRG Park and Bush Intercontinental Airport, earning her forklift certification in the process.

McLean also was working with Nicole Lander, the Chief Impact Officer at Houston Food Bank. "I learned so much from her leadership style." Lander sent McLean into the Sunnyside area and surrounding neighborhoods to work with residents and food distribution partners to discuss their needs, solutions and ideas. McLean says " I equate it to treating every single partner as if they just bought a $300 bottle of wine. I'm going to walk you through this dinner experience and I am going to take care of you."

Besides her work with non-profits like Houston Food Bank and I'll Have What She's Having,  McLean has been in various kitchens over the past few years doing consulting and working special events. However, she says that it was the nights she spent at Tony's after he passed away, talking to his wife Donna Vallone, that made her think about returning to the place which held so many memories for her. "It was those nights at Tony's, in the front, that I saw myself there, I saw myself returning. I started to dream it. What would that look like?"

McLean in podcast action.
Photo by Brian Brossa
The opportunity came when Austin Waiter, the executive chef who succeeded McLean at Tony's, announced recently that he was leaving to head up the kitchen at The Marigold Club, an upcoming restaurant and bar from Goodnight Hospitality.  With Waiter's departure, McLean began working with longtime Tony's sous chef, Joey Gomez, with whom she had previously worked at Tony's for years. "He and I kind of grew up together. There was this one year where he just got really good. He just blossomed. That was really the same year it happened for me. I became a better operator and more creative."

Gomez's father Chelino Gomez is also back at the restaurant where he had worked for decades. McLean is excited to have Joey as her right hand man and Chelino as her business brain. "Chelino taught me the business of the kitchen. I could go on and on about the people at Tony's, in the kitchen and the front of house."

Of course, the one person who won't be there is the man himself, Tony.  And that's where McLean gets emotional and, unlike her usual self, speechless. "Oh, man. It's been 14 months. I am at a good place now in my grief. I feel him. I know he's there. I know he's with Donna. I know he's with us. There will be moments when I am just talking to him. I have so much energy for this. I just can't wait to get back with Donna and to honor him. And roll with the punches like he did."

Kate McLean with Tony and Donna Vallone at his eponymous restaurant.
Photo by Tony's
Even though McLean knows that it can be an intricate dance between tradition and innovation, she credits Tony Vallone for being willing to change things up in his day. Certain menu items are sacrosanct but McLean feels that she can help keep his spirit alive by creating new dishes. "He lives within us and Donna has always been there. She's still there greeting everyone, touching every table."

McLean continues, "Tony and Donna were inseparable. She and I have a great relationship. I am excited at the thought of working with her, and her daughter, Lauri Vallone Mazzini, as well. She runs the business. She was Tony's right hand. And the fabulous Tony team. I just want to get home and back to them."

McLean plans to celebrate Tony Vallone Day at the restaurant every April 1, the day that former Houston Mayor Annise Parker designated as Tony Vallone Day in the city. " I want to celebrate our dude, " McLean says. "Maybe with a fine dining dim sum. Martinis walking around. We're going to dress up, too. Tony wore a tuxedo every day." McLean hints that she may have her own high fashion version of a tuxedo made, albeit one that can be easily moved around in for service.

McLean is also planning a tasting menu. It may be called Kate's Playground, it may not. But she definitely wants to utilize the wine library with its Murano glass chandelier and Versace chargers.  McLean wants to go beyond just pleasing people with delicious food and drink. "How do we stimulate you? It's music. It's show. I want to take this beautiful enclosed area and turn it into an experience." She mentioned having a mime but thankfully, that was just a joke.

Mclean is currently busy with the lunch, dinner, tasting, dessert and bar menus but she says her first area to hit was pasta. "Tony was always saying, 'We need to work on your pasta.' I just wasn't getting it. I have worked on my pasta and now, I get it."

McLean also has big plans for the bar with bites both show-stopping and practical. Show-stoppers might include a foie gras torchon, molded like a Hershey's kiss, covered in chocolate and wrapped in foil with a tiny Tony's tag peeking out.

With her tasting menu, she wants to be inventive and show her "bad-ass" cooking techniques but McLean also wants to stay in Italy as far as the cuisine goes, though much of her ideas also draw on her French techniques as well.  One possible dish is a six-foot long pappardelle, placed in a spiral on a plate and topped with fish, along with Castlevetrano olives and fish fumet that looks like bubbles when the ocean hits the sand. Other Italian-inspired dishes might include a fritto misto of tiny root vegetables and perhaps an anchovy aioli. 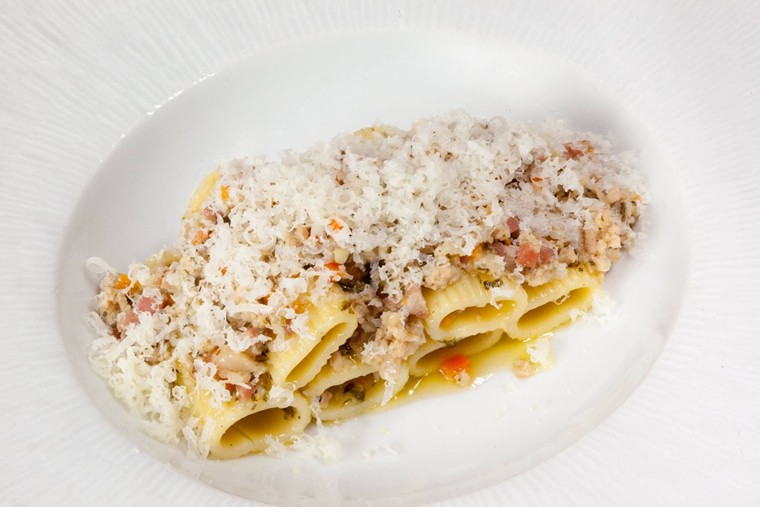 Tony Vallone's Bolognese Bianco stays.
Photo by Tony's
McLean compares her return to Tony's as wanting to get home after a long vacation. And she believes that the experiences she's gained have helped her to be a better leader. "I feel better equipped. I've gotten more tools. I feel stronger as a female operator." For those newfound leadership skills, McLean gives credit to Margaret Downing, Editor-in-Chief at the Press, where McLean wrote on various issues, primarily Chef Chats, cocktails and food stories. She is extremely grateful for Lander's guidance at Houston Food Bank and her work relationship with Brian Brossa, her one-time boss at Enoteco Rossa and fellow co-host of the podcast, Pre-Shift with Kate and Brossa.

Her attitude of gratitude lights up her face. Talking to the energetic chef about her culinary journey, one is struck by not so much the fire in her belly as the flame in her heart.  "I'm just so grateful to Donna. I don't need anything else. I didn't know life could be like this. I just feel so happy and complete."

Kate McLean returns to Tony's February 10 just in time to execute the Valentine's Day menu which will offer dishes like Tony's Classic Bolognese Bianco and Kate's Spaghetti Marechiaro, a partnership that continues in spirit.
KEEP THE HOUSTON PRESS FREE... Since we started the Houston Press, it has been defined as the free, independent voice of Houston, and we'd like to keep it that way. With local media under siege, it's more important than ever for us to rally support behind funding our local journalism. You can help by participating in our "I Support" program, allowing us to keep offering readers access to our incisive coverage of local news, food and culture with no paywalls.
Make a one-time donation today for as little as $1.