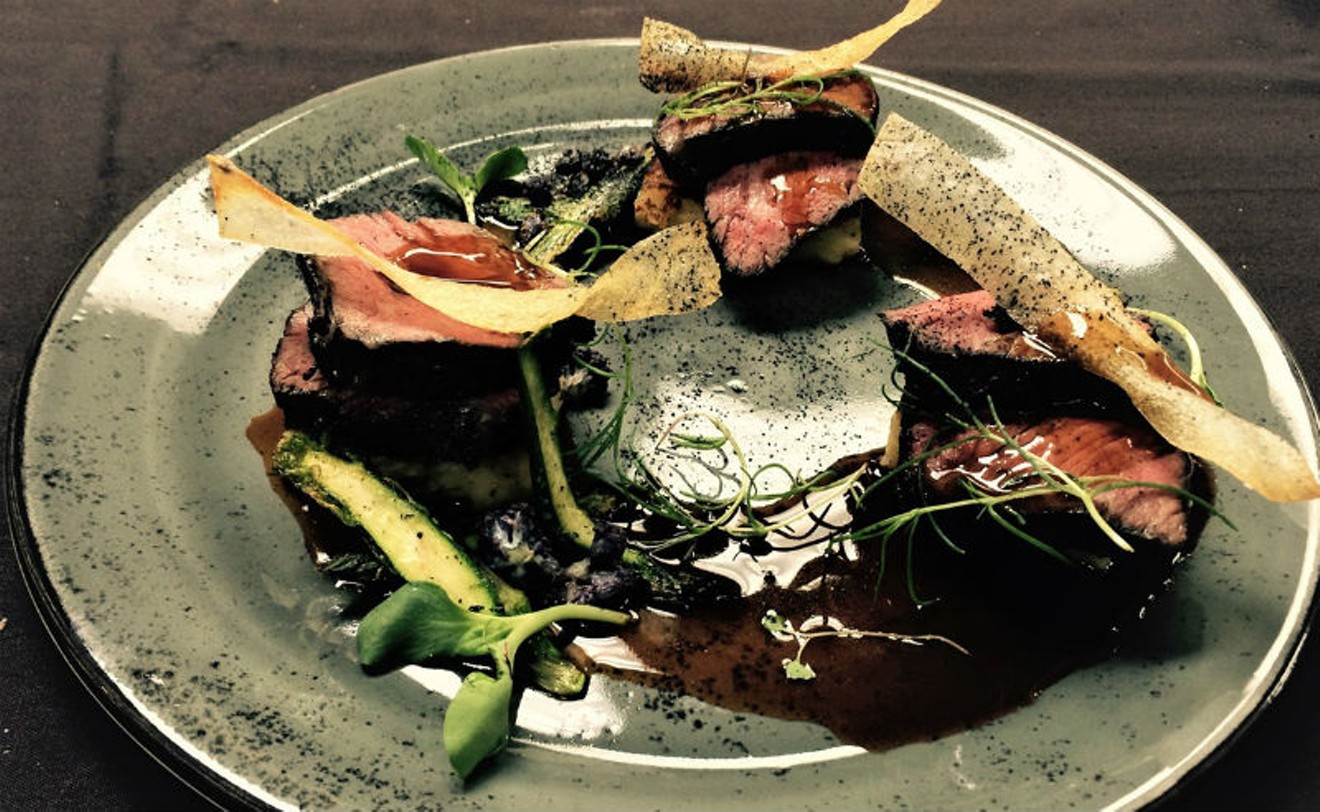 The 14th Annual Landry's Iron Chef was held at the Galveston Island Convention Center with a number of local and national Landry's chefs competing in a two-day event to take home awards in a variety of categories. There was also the chance to win a spot on a menu in the Landry's restaurant canon, which includes more than 600 restaurants and a multitude of concepts across the country with international franchises as well. And, as of November 4, owner Tilman Fertitta just added Del Frisco's Double Eagle Steakhouse and Del Frisco's Grille to his restaurant empire, according to Houston Business Journal. Chef Ariel Fox puts the finishing touches on her Pollo en Cacahuate.
Photo by Christa Cassata
This year saw some Houston notables like Ryan Braden of Brenner's on the Bayou, Jason Cole of Willie G's, Ken Hicks of Cadillac Bar and Tim Eckard of McCormick and Schmick's. Also competing was Dos Caminos' Concept Executive Chef, Ariel Fox. Fans of Gordon Ramsay's Hell's Kitchen will remember that Fox went head to head with Mia Castro on Season 18 to vie for  $250,000 and a spot at Ramsay's Hell's Kitchen Restaurant in Las Vegas. Now, Fox has returned to her spot at Dos Caminos in New York City. The Iron Chef competition saw her not only competing but also assisting Houston super chef, Hugo Ortega, in the large spread of food that he and his crew created for Tuesday night's festivities at the Pleasure Pier. Willie G's Jason Cole took home an award for his Tiger Prawn Salad.
Photo by Lorretta Ruggiero
We got a first-hand, close-up, behind the scenes view of the chefs as they busily swept across the kitchen creating their dishes for the round table of judges, most of them COOs and Vice-Presidents of various Landry's holdings. Ortega was the celebrity judge for both the Iron Chef and the Junior Chef competitions.

There was some good-natured ribbing, a lot of jocularity and maybe a few f-bombs dropped in the hectic kitchen, with the walk-in door swinging open non-stop. A peek inside would make any home cook drool at the bounty of fresh and beautifully prepped ingredients. The expression "too many cooks in the kitchen" came to mind, but each seemed laser focused on the task at hand, which meant chopping, cooking, assembling and plating furiously as their time was called. Those who weren't up to bat hung around the tasting table eagerly awaiting the chefs' plate for a bite of their competitor's creations. Landry's Iron Chefs at work.
Photo by Lorretta Ruggiero
Each competitor had chosen a category way in advance, so these combatants were well-equipped for battle with their mise-en-place and carefully wrapped ingredients ready to go. A fellow chef dramatically mopped chef Jason Cole's brow as he labored over his Cajun-stuffed pork chops. Everyone stood in awe as Jessie Barthel of Post Oak Hotel assembled her lemongrass cheesecake over a circle of Fruity Pebbles kept together with a special white cocoa powder from Switzerland. As Chef Fox brought her Pork Belly Yucatan to the chefs' tasting table, I asked about the large leaf that she was using as a wrapper. It looked very familiar. She told me it was a Mexican Pepper Leaf. I recognized it as the plant I have in abundance growing along my back fence at home. If Chef Ortega needs a massive supply for his mole verde, I have plenty.

We left the chefs to their work, which I am sure they appreciated. It's tough to create a stellar dish, away from your familiar kitchen, for a circle of powerful judges to critique. Doing it under the curious gaze of looky-loos was probably not easy.

We took our seats in the ballroom to watch Mike Lee of Garden & Valley Isle Seafood, out of Honolulu, as he instructed us on Hawaiian fish cutting. The theme for the Junior Chef competition was Hawaiian cuisine and the students would get Lee's fresh tuna and Opakapaka to work with the very next day. Mike Lee shows his tuna cutting skills.
Photo by Lorretta Ruggiero
Lee showed the audience how a 39-pound Big Eye Tuna is butchered for retail. His wild fishery uses long line fishing to catch the Big Eye and Yellowfin tuna way out at sea. In fact, the boats have to go beyond a 70-mile radius to leave fish for sports fishing.

We learned that the Big Eye is slower-swimming and is caught at a deeper depth, making for an oilier and softer flesh, with a deeper color for sushi. The 52-pound Yellow Fin was then cut and Lee explained that because it is a faster swimmer at a relatively more shallow depth, it yields a firmer meat. Chef John Baker's bento boxes were stunning.
Photo by Lorretta Ruggiero
After a lunch of freshly cut sushi, the gathering of media and PR folks were back in the kitchen watching knives chopping at lightning speed and pans flying from fire to counter tops as each chef vied for compliments from their fellow competitors and championship status from the judges. The Pleasure Pier was awash in chefs and stormy weather.
Photo by Lorretta Ruggiero
After the first day's competition, the chefs and other Landry's employees were treated to dinner and cocktails on the Pleasure Pier in Galveston. There was a cocktail competition which included bartenders from six local businesses. Before opening the line to his generous dinner buffet, Ortega said a few words about his path to culinary stardom; from his roots in Oaxaca, Mexico to being one of Houston's most celebrated restaurateurs and a James Beard Award winner. His humbleness is always endearing and the crowd of chefs seemed taken with his humility. They were also taken with his cuisine as chefs from New York, Las Vegas and San Diego got a taste of Houston's finest Mexican flavors prepared by Ortega, Fox and his staff. There was a multitude of salsas, but I only got to taste two before the gale winds and threatening storm forced the crowd to retire to an indoor spot. However, I did get the opportunity to taste the delicious alligator ribs, something I have never tried before, but if Chef Ortega is cooking them, I definitely will again. Each school was paired with a mentor chef from a Landry's concept. Before entering the kitchen to prepare their dishes, they were given their mystery box reveal and time for team planning. Some of the teams were made up of six or seven students but had to be cut down to three contestants each in the kitchen.

The students were then taken to different stations to learn more about the restaurant industry. There was the judges' table where they saw first-hand how experts taste and value a plate. They also went to the photography station where they were shown the ins and outs of food photography. Then, they were given a short presentation on the importance of social media and public relations in the hospitality world. They also spoke with Landry's recruiters to learn more about job options. The Junior Chefs had a bounty of goodies to choose from.
Photo by Lorretta Ruggiero
When the students made their way into the kitchen, teams staggered for time's sake, it was easy to spot the ones who were eager beavers and the ones who still hadn't completely woken up. Some of the knife skills had this mom on edge for a bit. Though I did give out one band-aid that day, it was non-kitchen related. One tall young man from Clear Creek, under the watchful gaze of Chef Carlos Rodriguez, did seem to have some mastery with his blade. Once the kitchen had all four teams inside, the energy picked up and the students began to immerse themselves in the spirit of competition.

They had a spread of typical ingredients used in Hawaiian cuisine from which to choose: Kewpie mayonnaise, sa giang (dried shrimp), yuzu kosho, pickled ginger, pineapple, avocado and many more familiar and not-so-familiar foods. One Iron Chef lamented the fact that none of the schools chose to include SPAM in their dishes. The team from Pasadena ISD working on their winning dish.
Photo by Lorretta Ruggiero
Each mentor chef led the young people in a different way. Chef Mike Frietsch of Brenner's on the Bayou was a precise task master, advising his Pasadena ISD team on how to execute a perfect purple potato smear. Chef John Baker was a more mellow guide as he coached the Katy ISD team, led by instructor Chelsea Glumm. Glumm told me that Baker had four daughters of his own, which accounted for his paternal calmness. Chef Faithy Harris-Dowdell was already on my radar as a big personality and his mentorship style reflected that as he joked and teased the kids from Deer Park into creating their dish. The secret ingredients for the Junior Chef Competition 2019.
Photo by Lorretta Ruggiero
When the time was up for each team, they presented their item to the long table of judges. They were asked questions as to why they made the choices they did, such as using a certain style bowl or adding Sprite to the sauce. They were also quizzed on their use of the secret ingredients which included sea beans, Okinawa purple potatoes and hearts of palm. Then the winners were announced. First Place went to Pasadena ISD for their seared sesame tuna. Deer Park ISD received Honorable Mention for their pan-seared Opakapaka and sea beans.

Chef Ariel Fox gave a speech to the students describing her first failed attempt on Hell's Kitchen, Season 6 and her subsequent return and win last year on Season 18. She told them that sometimes you have to embrace failure to learn from it. Chef Ortega encouraged the students and expressed his gratitude for his own success, telling the students " No matter what path you choose to take, it will be great because you are in America".

And that's why Houston loves the guy. Chef Andreas Siedel of Strip House Downtown NYC took home top honors.
Photo by Landry's Inc.
For more information about the Landry's Iron Chef 2019 winners, check out Landry's Inc. on Facebook.
KEEP THE HOUSTON PRESS FREE... Since we started the Houston Press, it has been defined as the free, independent voice of Houston, and we'd like to keep it that way. With local media under siege, it's more important than ever for us to rally support behind funding our local journalism. You can help by participating in our "I Support" program, allowing us to keep offering readers access to our incisive coverage of local news, food and culture with no paywalls.
Make a one-time donation today for as little as $1.