Why Isn’t There Already a Michelin-Starred Restaurant in Houston? 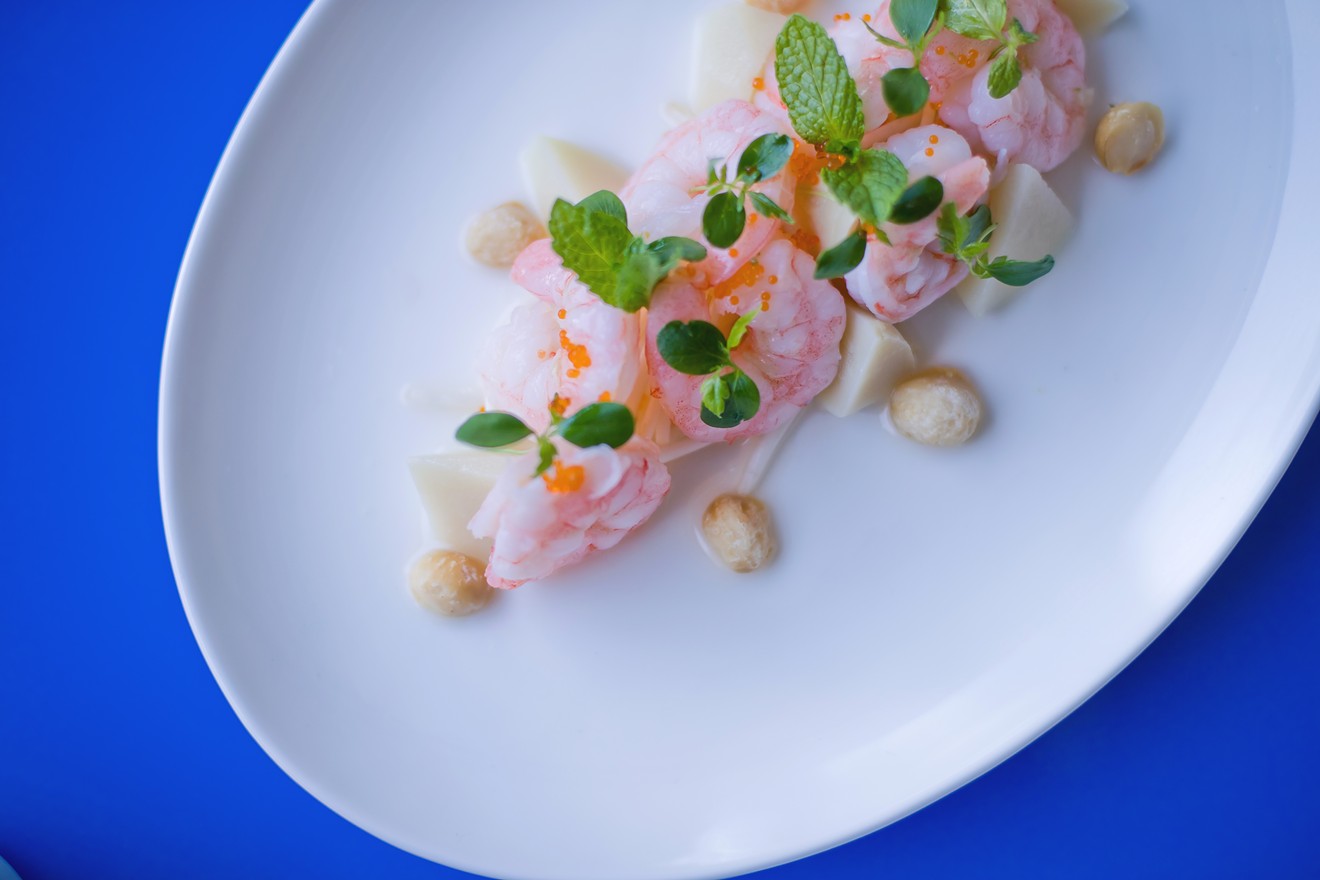 The spicy wild-caught Gulf shrimp salad was made specially for the Houston location. Photo courtesy of Morris Malakoff

On Wednesday, March 29, the wait was finally over for many a food lover in Houston. The first restaurant in Houston with a Michelin-star pedigree opened its doors to great acclaim and fanfare. From the Hakkasan Group, which owns and operates several high-end restaurant and nightclub brands worldwide, Yauatcha is a modern reinterpretation of the traditional Chinese teahouse, featuring both contemporary Cantonese dim sum and patisserie using Asian ingredients and European culinary techniques.


If you have ever watched a movie, documentary or television show involving a well-known or highly regarded chef, then you may have heard of a “Michelin Star” or Michelin rating system. In Burnt, a 2015 American drama film that stars Bradley Cooper and Sienna Miller, Cooper plays a chef who experiences a fall from glory and obsessively attempts to redeem himself and attain his third Michelin star. Sukiyabashi Jiro, the subject of David Gelb’s 2011 documentary film Jiro Dreams of Sushi, was awarded three stars by the Michelin Guide and is regarded as one of the best sushi restaurants in the world. When celebrity chef Gordon Ramsay’s New York restaurant, The London, lost its two-star Michelin rating in 2013, Ramsay admitted crying and stated that it was like “losing a girlfriend.”

So what is the deal with having a Michelin star anyway? Why don’t any Houston restaurants have the prestigious designation? And isn’t Michelin a tire company, after all?

According to Michael Ellis, international director of the Michelin Guide, the guide was the vision of brothers Édouard and André Michelin, who founded Michelin, the French tire manufacturer. In 1900, the first guide was published and given to motorists and cyclists for free. The purpose was to provide them with helpful information about service station locations, route and where they could eat and sleep their way.

Because places to eat were listed, the guide eventually led to the need to discern what kind of food was served, whether the food was good and the details of the restaurant. The brothers believed that the guide, the original “content marketing” idea, would help promote and encourage more travel, which would have a direct impact on their 12-year-old tire business.

“The selection of restaurants in the guide offers the best restaurants in each category and inclusion is an honor in and defines the establishment among the ‘best of the best,’” Ellis says. “In New York, there are 900 restaurants that have been reviewed by the Michelin inspectors. Only 76 of them receive a designation of one, two or three stars. Additionally, the Bib Gourmand distinction is used to identify restaurants that have good value for money and are some of the Inspector’s personal favorites. The stars have had the same standard of designation for nearly 100 years. The information and criteria required for classification and awards are revised and updated every year, and the standards and criteria are the same in all countries covered by the Guide.”

According to the Michelin Guide, the ratings are defined as follows:
One star — cooking, worth a stop
Two stars — Excellent cuisine, worth a detour
Three stars — Exceptional cuisine, worth a special journey
Bib Gourmand — Inspector’s favorites for good value. A diner can expect to find two courses and a glass of wine or dessert for $40 or less.

According to Ellis, “Michelin does not publish how many inspectors it employs, but each inspector dines and reviews approximately 250 restaurants a year. Inspectors may be based in certain cities but travel to other markets in order to reduce or eliminate any intrinsic bias. The stars certainly receive the most attention but are only a fraction of the guide’s content.”

So what makes the Michelin Guide and its rating system unique compared to other culinary rating systems or guides? Anonymity and consistency seem to be the keys. “Because the reviews are compiled from culinary and hospitality experts who have been in the industry for ten years, at least, and their identity is entirely anonymous — the Michelin Guide is exceptionally unique,” says Ellis. “This anonymity allows the inspectors to dine just as any guest would and thus receive the same treatment. Our inspectors make visits to restaurants to gauge the quality of cuisine offered to the everyday customer. They are not given preferential treatment and they always pay their bills in full.

“Additionally, the inspectors solely evaluate the food on the plate. They make note of the decor, and of the restaurant itself, but their evaluation is based on five criteria: quality of the products, mastery of flavor and cooking techniques, the personality of the chef in the cuisine, value for money, and consistency between visits. Additionally, the inspectors apply the same time-tested and rigorous methods in every restaurant in every country. This allows for consistency among starred restaurants globally. Diners can expect similar levels of quality in a one-starred restaurant regardless of whether they are dining in Italy or Brooklyn.”

“The James Beard Awards began in 1990, while the first starred restaurant was recognized in 1926,” says Ellis. “Another significant difference is that James Beard recognizes chefs and culinary leaders only in the United States. The Michelin Guide began in France and within four years had spread to Belgium, the Netherlands, Germany, Spain and more. Today there is a Michelin Guide in 28 countries around the world, with new editions added every year.

“Currently, in addition to Washington, D.C., the Michelin Guide only assesses and awards Michelin stars to restaurants [in the United States] located in New York City, San and the Bay Area, and Chicago. In order to be considered for a Michelin star, a restaurant has to be located in a city where the Guide is published. Globally there are nearly 30 Guides that focus on individual cities, countries or regions. The locations of the guides are determined by many factors such as the diversity and prominence of the culinary scene.”

Houston has had its fair share of James Beard winners in the past couple of years, so could Houston be the next city to be added to the guide? Ellis is noncommittal. “We are always keeping an eye on hot dining scenes. We have nothing to announce at this time, but there are chefs doing incredible things all across Texas that we are watching closely.” 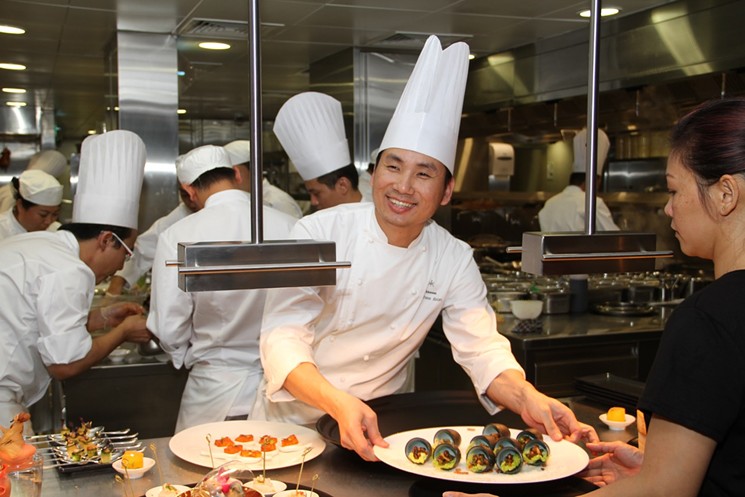 Executive chef Ho Chee Boon says he hopes the Houston restaurant will attain a Michelin star just like its London original.
Photo courtesy of Yauatcha
Check These Out

Although Yauatcha Houston is technically not a Michelin-rated restaurant (yet), this will be the first opportunity for Houstonians to enjoy a Michelin-star experience. “The first Yauatcha in Soho, London, was awarded a Michelin star in 2005 within a year of opening, and it has maintained this star to this day,” says Executive Chef Ho Chee Boon. “For it was heartening to see such a well-respected, international gastronomic organization such as Michelin recognize that a Chinese restaurant could be considered to be worthy of such a prestigious award.” With that kind of consistency, one can be hopeful that the Houston outpost will have the same high levels of cooking and ingredients.

According to Boon, the menu in Houston will feature many of the signature dishes from Yauatcha in London, including , har and char siu buns, which are three of dim sum. “But we have also created dishes for Houston that use local ingredients, such as spicy wild-caught Gulf shrimp salad with bamboo shoots and cloud ear mushrooms,” says Boon.
Recommendations and “must-haves” from Boon include:

Venison Puff: “One of our most popular dishes in London, the venison puff is filled with sweet and sticky venison marinated with black pepper sauce and char siu sauce.” 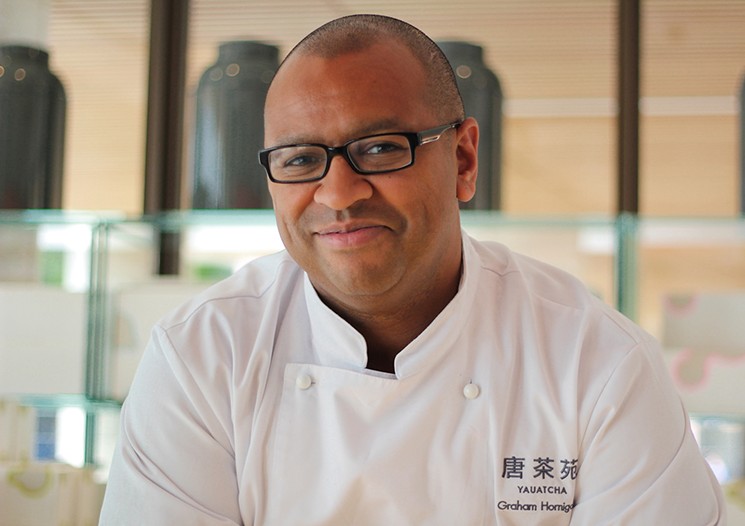 Tropical Dome: Made with coconut dacquoise, and pineapple 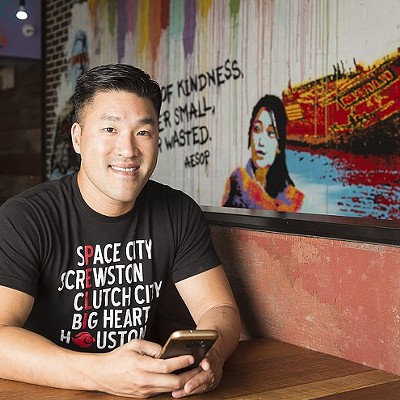