Noe's Cafe, 2120 Spring Stuebner, opened January 26. We mentioned their soft opening last week but we have more details about the new restaurant opening at The Market at City Place. It's the third concept for Wanalee and Adam Gorelick who also operate Noe's Crepes in Conroe and Charm Thai Bistro in Spring, which is located across the street from the new Noe's Cafe. Adam Gorelick is teacher turned chef/restaurateur at Noe's.
Photo by Michael Anthony
The Gorelicks first met when Wanalee was working as an au pair. She grew up in Thailand and studied to be a social worker before making her way to the United States. Husband Adam recently gave up his career as a math and science high school teacher to focus on the couple's growing businesses.

Their newest venture is a 3rd wave coffee shop and cafe which will serve breakfast and lunch from 8 a.m. to 3 p.m. with an eye to adding dinner service in the future. There will be freshly made pastries, waffles, french toast, crepes and omelets for breakfast plus burgers, pasta and seafood for lunch and eventually, dinner. The restaurant has an outdoor patio and will have a beer and wine license plus frozen drinks. Chicken and waffles are on the menu at Noe's Cafe.
Photo by Michael Anthony
The cafe will also serve locally processed and ethically-sourced Geva coffee from North Houston and Purefi Coffee Roasters coffee from Spring, Texas. The shop has high end espresso machines form Slayer and Faema. Let them eat foie gras on filet mignon!
Photo by Alex Wu
The Ranch Saloon + Steakhouse will open at NRG Park February 28 through March 20. Debuting at The Houston Rodeo 2022, this first-of-its-kind concept comes from Berg Hospitality. It will offer rodeo patrons a sit-down dining experience on the NRG Park grounds and guests can opt for the Saloon or Steakhouse experience depending on how casual or formal they want their experience to be. In keeping with the fun spirit of the Rodeo, both will offer full bars.

The Saloon is a first come-first served set-up so cowpokes who just mosey in will be able to enjoy a casually upscale menu and venue with nightly live musical entertainment, a large bar and a covered outdoor dining patio called The Porch. The Apple Rum Cake at The Ranch Saloon +Steakhouse is a pretty thing.
Photo by Kirsten Gilliam
While the Saloon is more casual, it's still got fine dining prices with starters such as Blue Crab Beignets ($24), Tuna Tartare ($26) and be still my broke-ass heart, Oysters ($48). If that's too rich for your blood, there's Chili ($8/$12), a Hamburger ($16), a Wagyu Hot Dog ($12) and a Pulled BBQ Chicken Sandwich ($16) on the less costly side, especially considering how much the Midway fare is anyway. The Saloon also has entrees like the Snake River Farms Pork Chop, Bone-In Chicken Shank and Mushroom Rigatoni for those trying to escape all things fried or on a stick.

For the Steakhouse side, high-rolling guests can reserve tables in advance. The menu offers caviar service, seafood starters, entree salads plus a variety of steak cuts from North American Wagyu Filet Mignon to USDA Prime Porterhouse. Most steaks run from $64 to $92, though it has a select offering of A5 Japanese Wagyu and Kobe from 100 percent Tajima cattle, the rarest and most exclusive beef in the world, for a wee bit more. 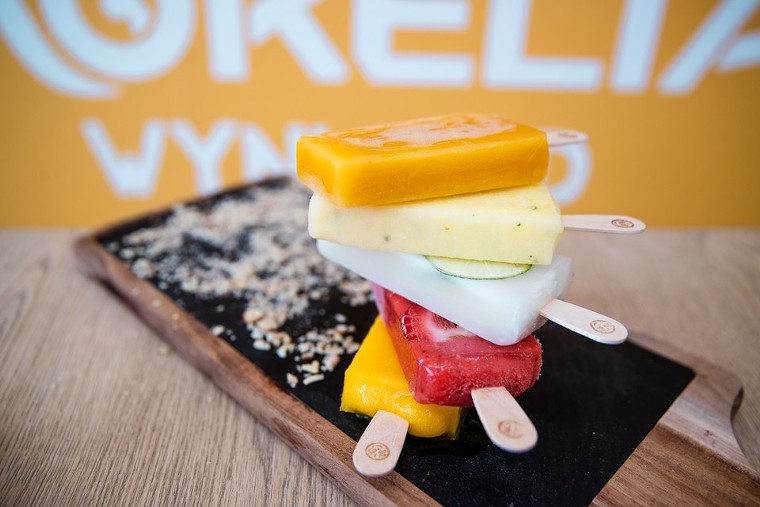 Morelia Gourmet Paletas, 16155 City Walk, will celebrate its grand opening January 28 and January 29 in Sugar Land.  A fitting location for a sweet Mexican popsicle shop, the new store will take its place next to Jupiter Pizza and Waffles Co. and the Art Museum TX. This will be the first Texas location for the Miami-based brand which has nine stores in South Florida and one in Charlotte, North Carolina plus shops in Mexico and the Dominican Republic.

For its opening celebration, the shop, also known as Paletas Morelia, will be giving away free paletas both days until sold out. That's more than 1,000 frozen treats per day. Dippings and Toppings will be extra, however. 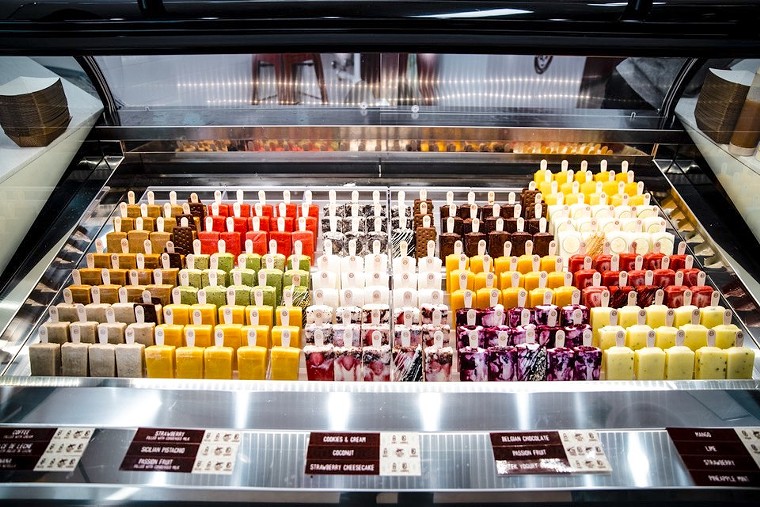 Paleta soldiers await dipping and topping.
Photo by Morelia Gourmet Paletas
The paletas, or Mexican popsicles, are larger than normal ice pops and at Paletas Morelia, they are hand-made with 100 percent natural ingredients. Customers will find fruit flavors such as strawberry, mango, pineapple and passionfruit made with fresh fruit, along the lines of Italian gelato and French sorbet. Fruit is a more common base for paletas but there are also rich and creamy options like Belgian chocolate, Sicilian pistachio and coconut using secondary ingredients such as water, milk and condensed milk for a more ice cream-like texture. There are more over-the-top choices too, including OREO Cookies & Cream, Reese's Peanut Butter and Dulce de Leche.

There are 16 Kosher-certified popsicles to choose from and that's before dippings and toppings. Willie's has something for everyone (salads not pictured).
Photo by Becca Wright
Willie's Grill & Icehouse, 2600 Smith Ranch Road, opened January 17 in Pearland. This is the 19th location for the Texas-based brand in the state. It's only the second Willie's to feature an expansive bar, taking it a step above its icehouse roots.

With its sprawling outdoor patios, both covered and open, the casual restaurant offers a comfortable place for families and friends to hang out. Parents with small children can grab a picnic table by the sandbox to keep an eye on their l'il critters while those who wish for more privacy can usually find a booth inside. The interior still fills a bit outdoorsy with the retractable glass garage doors usually being open except during really inclement weather. Willie's has new Texas Toast sandwiches.
Photo by Becca Wright
The decor is rustic like any place that calls itself an icehouse should be, with Texas-inspired, vintage-style memorabilia and just enough large flat-screen televisions for game watching but not obtrusively. The menu offers hangout-friendly fare like Fried Pickles, Loaded Fries, Chips and Queso and its famous Hand-Breaded Onion Rings. There are burgers, chicken sandwiches and po'boys plus tacos (brisket, Baja shrimp or mahi-mahi) sirloin steaks, fried or blackened catfish, baby back ribs and chicken fried steak.

The giant iced-down cooler at the entrance has a wide variety of beers and bottled drinks plus there are frozen cocktails, a selection of wines plus a full bar.

East End Backyard, 1105 Sampson, is currently closed for renovations and construction. It is shooting to reopen in March with a new covered patio and a "food element".

Hay Merchant, 1100 Westheimer, closed January 23
Kenny & Ziggy's, 2327 Post Oak, closed to relocate January 16
One Fifth Red Sauce Italian, 1658 Westheimer, closed January 22
Steamboat House, 8045 N. Sam Houston Parkway, closes January 29
KEEP THE HOUSTON PRESS FREE... Since we started the Houston Press, it has been defined as the free, independent voice of Houston, and we'd like to keep it that way. With local media under siege, it's more important than ever for us to rally support behind funding our local journalism. You can help by participating in our "I Support" program, allowing us to keep offering readers access to our incisive coverage of local news, food and culture with no paywalls.
Make a one-time donation today for as little as $1.