International Smoke, 800 Sorella Court, will make its Houston debut July 5, adjacent to the Hotel Sorella at CityCentre. The San Francisco concept comes from owners Ayesha Curry and James Beard award-winning chef, Michael Mina. Curry is known for her best-selling cookbooks, her Food Network celebrity and of course, much to the chagrin of Houston Rockets fans, her marriage to NBA star, Stephen Curry.

Mina is a prolific restaurateur and the duo have drawn on their own ethnic backgrounds and global travels to bring an eclectic menu of grilled and smoked dishes. While some Houstonians may whinge about " another barbecue restaurant", a quick look at the menu shows that International Smoke is anything but. 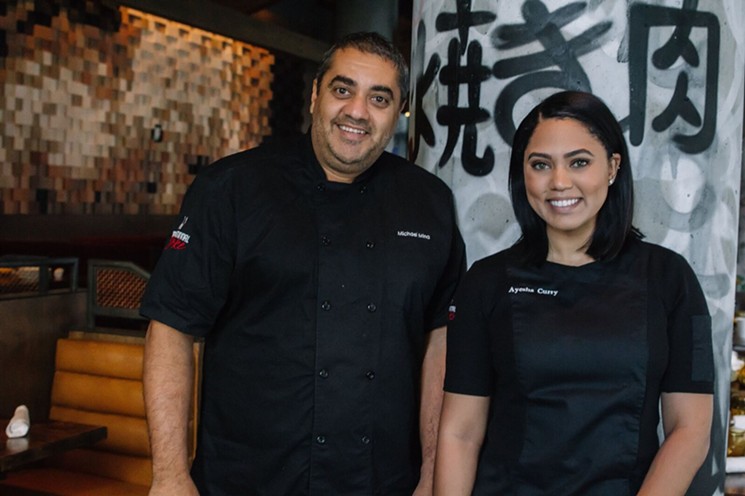 Chef Michael Mina and Food Network star Ayesha Curry.
Photo courtesy of International Smoke
This isn't your favorite paper plate, three-meat, sweet tea joint. Unless your Mom and Pop dive serves lemongrass pork chops with stir-fried clams and glass noodles. Nor is it similar to the upscale barbecue restaurants that have glammed up like the city's finest steakhouses.

Curry and Mina have wisely chosen Houston's E.J. Miller as executive chef and he will be doing regional sourcing from local farms and ranches such as 44 Farms, Blackhill Farms, Gundermann Acres and others. Miller, formerly of Riel and several Clark Cooper Restaurants concepts, will showcase his Houston roots.

While much of the menu leans to the exotic with spices, techniques and ingredients from all over the world, there are some familiar items such as the " St. Louis Cut" smoked pork ribs, served with a choice of American BBQ, Mexican Adovada and Korean Gochujang.

The restaurant will be open for happy hour and dinner, with lunch and brunch service to follow later in the summer.

As for the disgruntled Rockets fans giving fake and nasty Yelp reviews to the as of yet unopened restaurant, we are better than that. In a diverse city of six million people, there are bound to be some yabbos. Don't be a yabbo.

Early birds can order the breakfast tacos or rolls until 11 a.m. and late risers have a variety of sandwiches made with local artisan bread to choose from, as well as wraps, salads, and chowdas. Unlike most sandwich shops, beer and wine are available.

The Dallas-based sandwich shop opened its first Houston store at 4444 Westheimer with a grand opening May 31, 2017.

Summer's here and the tea drinking is easy.
Photo by SuperbStudio Co.
Muse Tea, 1809 Eldridge Parkway, began its soft opening June 7 and had its grand opening weekend June 23 and 24 with BOGO beverages. The tea shop offers boba, milk teas, smoothies, and matcha as well as coffees such as Vietnamese iced coffee.

When it's ninety-eight degrees, coffee needs ice.
Photo by SuperbStudio Co.
The shop plans to eventually serve snacks such as popcorn chicken and garlic fries as well as hot drinks in the future.

For a tasty snack, try the youtiao, a Chinese cruller similar to fried churros. The menu showcases a variety of Malaysian dishes with flavors such as coconut, basil, pineapple and curry.

Shrimp and noodles.
Photo courtesy of Phat Eatery
With its sign stating that PHAT means highly attractive or gratifying, it's bringing a unique cuisine to the Katy Asian Town that seems to be churning out a new restaurant or cafe on a weekly basis.

Henderson and Kane General Store,715 Henderson, which began its soft opening in mid-June will celebrate its grand opening on July 4, according to Houston Food Finder.

The food shop from John and Veronica Avila, also the owners of El Burro and the Bull at the Conservatory food hall downtown, sells house-smoked meats, sausages and fresh-baked pastries along with products from local producers and vendors. There are plans to add more locally and humanely raised meats and co-op offerings.

The grand opening celebration will offer a full barbecue menu, beer and wine, plus a great view of the fireworks at Eleanor Tinsley Park.

The Ranch Bar + Kitchen, 13245 Jones Road, began its soft opening June 25. The new business is taking over the former "The Office" space and has transformed it into a fun space decked out with unusual tchotchkes and retro games, including video games like Mortal Kombat, Blitz, and NBA Jam. There are also a couple of pool tables, darts, and a giant Connect Four. For those who want to get a little more interactive, hopscotch and Twister are painted on the floors.

The owners, Amy and Austin Schuring, want the vibe to be laid back, old-school hippie and local. They also operate The Farm Drinkery at 16646 Champion Forest in Spring, which opened four years ago.

The walk-up snowball stand will operate out of what was once the bank teller drive-thru. Now, when you deposit your money, you will get a frosty treat in return.

The snowballs are made with organic syrups from California-based Nature's Flavors, with choices like fruit punch, watermelon or chocolate peanut butter. Shaved ice enthusiasts can snowcap their frozen treats with condensed milk, chamoy or organic milk floaters from MALK, which makes vegan nut milks such as rich maple pecan, almond and cashew here in Houston. Prices start at $2.50 for an 8-ounce and $3.50 for a 12-ounce.


Pepper Twins, is on track to open a new location at CityCentre in the fall. The newest outpost of the critically-acclaimed Sichuan-style restaurant, with its focus on organic ingredients, will be on the second story, adjacent to RA Sushi. There will be a shared terrace overlooking CityCentre's central plaza and a private patio facing an interior courtyard.

Woodson's Local Tap + Kitchen is expanding to Spring at the Birnham Woods Marketplace and is expected to open in late 2018. The first location opened in The Woodlands in March 2017. Local is part of its name and part of its philosophy. The new restaurant will feature local food purveyors including Slow Dough Bread, but also local builders and custom furniture.

The new spot will host an expansive dog-friendly patio and a modern, rustic decor.

To get an idea of what to expect, make the drive to The Woodlands location and try out the menu, which includes some typical bar favorites like wings and chicken fried steak, but also artisan fries like the Magnolia Fries which are french fries topped with brisket, fried onions, fried pickles, bbq sauce and queso. If you're looking for something even more off the wall, try the Reuben egg rolls. For something much lighter, there is the veggie pasta made with yellow squash and zucchini noodles.

There is an extensive beer menu, with a number of Texas craft brews. Tuesday night is $7 Flight Night from 4 p.m. to midnight.

Owner Allison Chavez has a tendre for crepes.
Photo by Julie Soefer
Sweet Paris Creperie and Cafe, has announced that it will open a new crepe cafe in The Woodlands in late fall at Market Street on Six Pines Drive. Market Street opened in 2004 and will be undergoing major renovations to its green space, landscaping and outdoor seating.

Ivan and Allison Chavez opened the first Sweet Paris in Rice Village in 2012 and there are now four locations: Rice Village, CityCentre, a recently opened store in Katy and one in Mexico. Besides the upcoming Woodlands cafe, there are two more in the works for Highland Village and College Station.

If you want something s'more from your crepes, try Sweet Paris.
Photo by Julie Soefer
The couple's love for crepes, savory and sweet, has led to an expansive menu that features crepes including ham and Gruyere or chicken enchilada and the local favorite,The Houstonian; a breakfast crepe of mozzarella, bacon, sausage, potatoes, two scrambled eggs and fresh jalapenos. Breakfast crepes are available until 3 p.m.

For those who have le dent sucree, the sweet crepes can be ordered with that European favorite, Nutella, or even an apple cinnamon creme brulee crepe. Try a cup of hard cider with that one.

Wine and champagne are available for Francophiles wanting to while away an afternoon dreaming of Paris and forgetting the Houston humidity. To be fair, Houston has better air-conditioning.

A spicy ham and turkey sammie with a liquid lunch sounds good to us.
Photo courtesy of Carla Gomez
La Vista 101, 1805 W. 18th, debuted its new lunch menu this week, with most meals coming in at a reasonable $9-11. There are salads, sandwiches and burgers. The sandwiches are served on house-made focaccia  and include the "lavistadelphia" cheese steak (say that three times in a row) and for veg-heads, there is the grilled veggies and grilled portobello sandwiches.

Photo courtesy of Carla Gomez
Burger buffs can choose the house beef burger ($9) or the tuna burger ($10) with jalapenos and feta. They include a side of pasta salad, sweet potato fries or shoestring fries. Considering the bounty (or abomination) of $12+ burgers in Houston that don't include fries, that's a good deal.

Last minute breaking news: Fusion Eats will open July 10 at 9 Greenway Plaza East. From the creators of Fusion Tacos in the Heights, Julia Sharaby and chef David Grossman, the new spot will offer some of the Fusion Taco favorites including fried avocado, chicken tikka masala and lamb keema. More on that next week.

Reported Closings for June 2018:
Artista, at the Hobby Center, closed
Krispy Bird & Batter, 5922 Richmond, closed
Popeye's Louisiana Kitchen, 7100 Lawndale, closed temporarily May 25, due to fire
Randall's, 12312 Barker Cypress, closed
KEEP THE HOUSTON PRESS FREE... Since we started the Houston Press, it has been defined as the free, independent voice of Houston, and we'd like to keep it that way. With local media under siege, it's more important than ever for us to rally support behind funding our local journalism. You can help by participating in our "I Support" program, allowing us to keep offering readers access to our incisive coverage of local news, food and culture with no paywalls.
Make a one-time donation today for as little as $1.