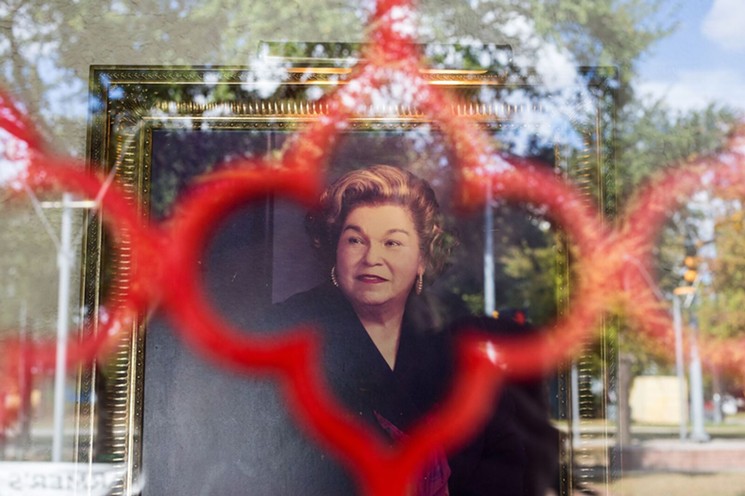 Aside from seating for 180 guests in the interior dining area, including bar seating and a flexible private dining room, there will be three covered patio seating areas for an additional 100 diners. Executive chef Alex Padilla, who has been at the helm of the kitchen at The Original Ninfa's on Navigation since 2006, will also oversee kitchen operations as Corporate Chef. There are plans to hire a chef de cuisine for the Uptown location in the next few months. Chef Alex Padilla mans the wood-fired grill.
Photo by Kirsten Gilliam
The new location will continue to serve the same fajitas and Ninfaritas that Houstonians crave. "Mama" Ninfa Laurenzo opened her first restaurant in 1973, which many people believe to be the birthplace of the now ubiquitous "tacos al carbon".

Jonathan Horowitz, CEO of Legacy Restaurants says, "We don't see the need to make any significant changes to The Original Ninfa's formula — both the classic items and the exciting new additions Chef Padilla has made over the past 12 years are extremely popular with our guests."

A new "Original Ninfa's" is planned for next year.
Artist's rendering courtesy of Michael Hsu
Modifications and updates on the new space will begin in the fall, with Austin-based architect and designer, Michael Hsu, creating the interior design. Hsu is also overseeing the design of Legacy Restaurants newest  concept, Mama Ninfa's Tacos Y Tortas.

A jumbo lump crab cake makes brunch luxe at The Original Ninfa's.
Photo by Becca Wright
The kitchen will be expanded to accommodate a wood-burning oven and wood-burning grill. There will be also be a tortilla-making station. Construction Concepts, based in Houston, will carry out the renovations.

Poboys are perfect for scarfing during a Texans game.
Photo by Cooper + Ricca
Legacy Restaurants also launched two locations of The Original Ninfa's on the Club Level at NRG Stadium, August 15, along with four kiosks of their other concept, Antone's Famous Po'Boys.

The Original Ninfa's at NRG will serve beef and chicken fajita tacos and salads, chips and queso, and the popular red and green salsas. And, of course, handmade tortillas.

Antone's, which was founded by Jalal Antone in 1962, will sell four of its original sandwiches, the Original, Super Original, Turkey and Swiss, and Tuna, plus a couple of salad options.

Po'Boys are easy to hold while cheering and doing the wave. Plus, it leaves one free hand for over-priced beer.

Mama Ninfa's Tacos Y Tortas, 800 Capitol, inside Understory, at Capitol Tower, will open in 2019 as well. The casual restaurant will serve Mexican street tacos and tortas. They will also sell the tacos al carbon and queso for which Ninfa Laurenzo was renowned. Executive chef Alex Padilla will adapt the recipes for the new concept. There will be a full bar with a menu that includes the famous Ninfaritas. The new concept will be open for breakfast, lunch, dinner and late night dining.

There are plans to open several more locations in the next couple of years.

Understory is one of several food halls and culinary hubs planned for the next year in Houston. It will be located in the Capitol Tower, which will also contain business offices, making for a lot of foot traffic and hungry employees.

The Dallas-based sandwich shop was founded in 2012 by Hunter Pond, who left law school to open the first shop in Snider Plaza. It grew to eight  Dallas-area locations and recently expanded into the Houston market this year with stores in River Oaks and Montrose. CEO Ken Bridge and executive chef and operating partner, Billy Kin, will keep some of the same items from Republic Diner such as the scratch-made ramen and award-winning kimchi. There will also be robata dishes from the Binchotan grill and bento-style lunches available seven days a week. Izakaya is a type of Japanese pub serving small courses, similar to Spanish tapas, while patrons socialize over a glass of sake or beer. Blackbird will offer a variety of sake, Asian beers and Japanese whiskeys to accompany its menu items.

Chef Olivier Ciesielski is taking it casual.
Photo by Phaedra Cook
L'Olivier, 240 Westheimer, will become Avondale Food and Wine, according to CultureMap Houston. The new concept, named for the Avondale neighborhood in which it's located, will have a retail wine showroom with its own entrance, displaying 100 wine bottles chosen by local wine consultant Nate Rose. It will no longer have a full bar, but will be wine and beer only.

The concept will be more casual than L'Olivier and will give chef/co-owner Olivier Ciesielski an opportunity to create a more diverse menu with shareable plates and a rotating menu with local and seasonal ingredients. Ciesielski was born in France, worked in French restaurant kitchens like Le Crillon in Paris and served as personal chef to the Onassis family, before landing at La Colombe d'Or in Houston and eventually a decade long career as executive chef at Tony's.

H-E-B, 14540 Memorial, will close September 9 to make way for its reinvention as an e-commerce distribution center, according to the Houston Chronicle. The new warehouse will support H-E-B's home delivery and curbside pick-up business. It will be the first of its kind for H-E-B, while the company is building another one in San Antonio.

While some shoppers were unhappy about the availability of certain perishable items due to the smaller size of the location, others are disappointed to see it leave due to the convenience of having a supermarket in the area. President Scott McClelland says there are plans for a future H-E-B store in the zip code, but it could take some time.

Whole Foods Market 365, 101 North Loop West, held its grand opening August 22. This is the second Texas location of the less expensive version of Whole Paycheck. It's a welcome addition to the Independence Heights area and will include an outpost of the Austin-based juice and coffee bar,Juice Society, plus a Peli-Peli Kitchen, the fast-casual spin-off of the popular South African restaurant, Peli-Peli.

Cafe Benedicte,15455 Memorial, reopened August 6, nearly a year after closing due to devastating damage from Hurricane Harvey, according to CultureMap. Owner Vahid Navissi's flood insurance premium had not been paid, due to an oversight, leaving no insurance funds to rebuild. Now, with help from a longtime customer and friend, Navissi has quietly reopened.

There have been a few modifications, with an extended bar for more seating, an added draft system for beer and the conversion of a private dining room into a lounge. The restaurant will serve a limited menu as the staff gets back up to speed.

Broken Yolk Cafe has eggsactly what you need.
Photo by Lorretta Ruggiero

Broken Yolk Cafe, 7019 Barker Cypress,  opened August 13. The California-based breakfast and lunch spot started in the Pacific Beach community near San Diego in 1979. Long lines of loyal customers and a fortuitous feature on the Travel Channel's "Man Vs. Food" in 2009 brought in investors looking to create a franchise model with the restaurant. It now has 28 locations nationwide.

It serves the usual staples like omelets and pancakes, but its variety of eggs Benedict are some of the most popular items. The Golden State Benedict has poached eggs on an English muffin with grilled tomato, avocado( sooo Californian), bacon, hollandaise and Sriracha sauce. There's also the Sope Benedict with corn tortillas,shredded beef, poached eggs, hollandaise AND ranchero sauce, topped with cotija cheese and avocado.

The restaurant serves cold brew of both the caffeine and the hops variety. For mimosa mavens, there are several different flavors available, or champagne for those who like their bubbles straight. Hours are 6 a.m. to 3 p.m., daily.

Bacco on the Bayou, 4005 N. Braeswood Boulevard, opened July 17. The Meyerland wine bar offers a comfortable ambiance with leather armchairs and wood-covered walls. Besides a selection of wine and beer, there is a food menu featuring cheese plates, soups and salads and a variety of pizzas, each named after a Greek mythological figure.

Unlike most wine bars, Bacco's offers a kids' menu for " Little Winos", with cheese pizza, grilled cheese, and mac and cheese. Kids like cheese.

Another Freddy's is on the horizon.
Photo courtesy of Freddy's Frozen Custard and Steakburgers

Photo by Dawn McGee
Hubcap Grill, 1918 Nasa Parkway, softly opened August 22, as reported by the Chronicle. The burger restaurant has locations in Downtown Houston, Galveston, Houston Heights and Bush Airport. It closed its Kemah location March 31 in order to relocate to the Seabrook spot.

It repeatedly wins awards for its never frozen chuck beef burgers served on homemade toasted rolls. The French fries are fresh-cut and twice-fried. Try the specialty burgers and fries. The sinful toppings will pop the elastic in the granny panties you wore for extra stretch.
KEEP THE HOUSTON PRESS FREE... Since we started the Houston Press, it has been defined as the free, independent voice of Houston, and we'd like to keep it that way. With local media under siege, it's more important than ever for us to rally support behind funding our local journalism. You can help by participating in our "I Support" program, allowing us to keep offering readers access to our incisive coverage of local news, food and culture with no paywalls.
Make a one-time donation today for as little as $1.