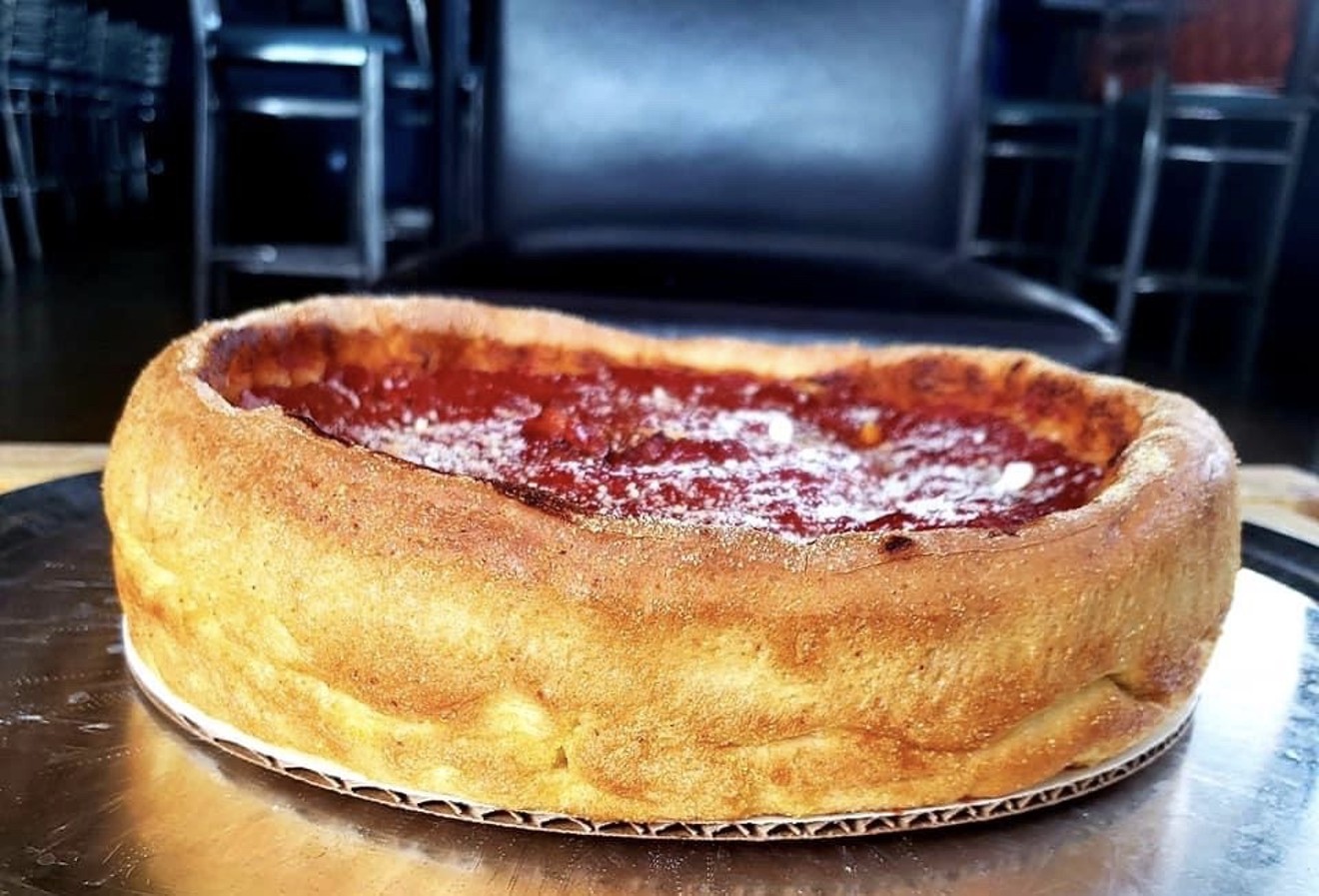 Deep-dish pizza coming out of Volcano Room has hungry folks happy. Photo by Joe Amato
Watching restaurants and bars create new ways to generate revenue during this nationwide crisis has been impressive. Family meal packs for curbside pickup, gallon margaritas, cocktail mixers and even caterers and private chefs working with bars are just a few creative solutions recently witnessed. Out in the suburbs of Houston, the Bay Area’s boating community is making things happen for local bars and restaurants. The support has been tremendous. A clever little bar located in Seabrook stands out by combining food with cocktails, managing to keeping staff employed and bills paid. Volcano Room's lively crowd before the shut down.
Photo by Stephen Ross
Owner Stephen Ross opened his island inspired bar, Volcano Room, in May 2016. With blacked out windows, bamboo ceilings and a couple of tiki statues randomly placed against dark walls, Volcano Room gives the feeling of seclusion and isolation away from the busy world. A solid black wall in the bar’s side room once lit with glowing glass skulls has been replaced by an adult game room with arcades, Skee-ball, air-hockey and more for those wanting to test those gaming skills after a few cocktails. The main room remains the same with a lounge area, bar tables, high-back orange booths, a thick concrete bar and just enough space for a DJ and dance floor. 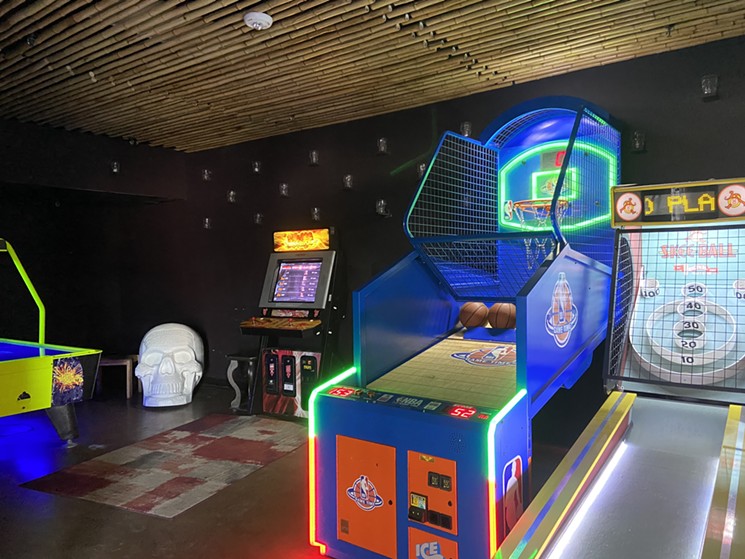 Combine your inner child with an adult beverage and try your luck at these classics.
Photo by Jennifer Fuller
From the start, Ross has provided bar snacks for guests at Volcano Room. Various macaroni and cheese dishes such as The Cartel topped with chorizo, queso blanco and diced jalapenos, Hawaiian sliders with jerk chicken or melted brie and ham and a small charcuterie board were popular menu items. Soon guests stopped by for more than just the sultry vibe and signature martinis of Volcano Room. Not long after opening, more elaborate entrees were desired over bar food. One bar regular, Joe Amato, overheard these conversations and presented an idea to Ross. Amato, having an extensive background in restaurants and graduating culinary school, impressed Ross and the two began to collaborate. 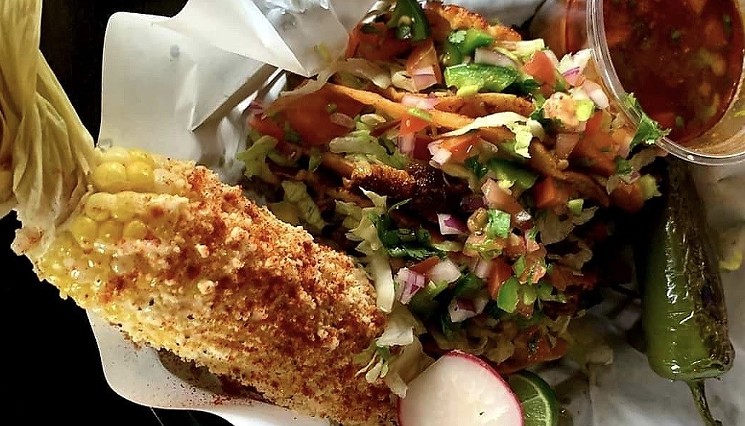 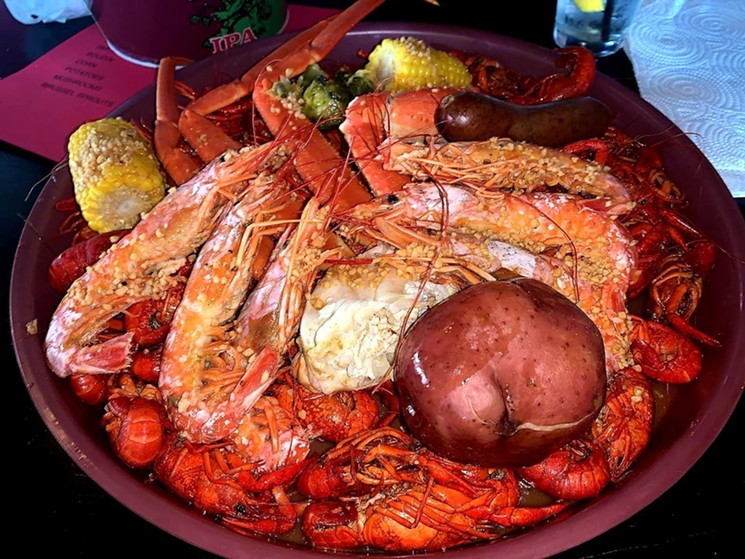 Crawfish, crab, shrimp and IPAs for the win!
Photo by Joe Amato
Amato has been crushing it with his interpretation of Chicago’s well-known deep-dish pizza. After a heated discussion in a local Facebook group about the need for a good, local deep-dish pizza, Amato saw a challenge and an opportunity. With his culinary background and some trial and error, Amato finally found his pizza-pie sweet spot. A pound of meat, a pound of cheese and 12 ounces of homemade sauce in every pizza makes his ooey-gooey, cheesy pies incredible. The pie dough is rolled in cornmeal, loaded with all the goods, placed into a buttered 10” deep-dish cake pan and popped into the oven for almost an hour. As these pizzas bake, the smell of melted mozzarella, garlic and a hint of buttered popcorn from the homemade crust travels throughout every corner of the bar. 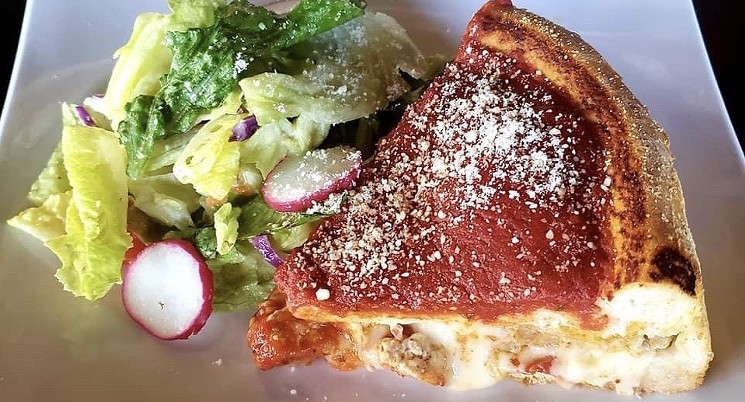 Plate up a thick slice of deep-dish and go to town.
Photo by Joe Amato
With the recent challenges and Ross temporarily unable to operate Volcano Room as a bar, Ross and Amato turned Volcano Room into somewhat of an anchored food truck with booze. Guests pre-order deep-dish pizzas and show up to Volcano on the designated day and time for pick up and have a cocktail or two while pizzas are cooled and packed, all while practicing social distancing and other recommended safety precautions in and outside the bar. This has allowed Amato to continue to make a profit and personally stay afloat. By continuing this operation, Ross has been able to generate enough income to keep his staff employed and give locals a reason to get out, have a cocktail, enjoy a great meal and feel sense of normalcy.

Volcano Room
4650 E NASA Pkwy
Seabrook
281-549-4080
KEEP THE HOUSTON PRESS FREE... Since we started the Houston Press, it has been defined as the free, independent voice of Houston, and we'd like to keep it that way. With local media under siege, it's more important than ever for us to rally support behind funding our local journalism. You can help by participating in our "I Support" program, allowing us to keep offering readers access to our incisive coverage of local news, food and culture with no paywalls.
Make a one-time donation today for as little as $1. 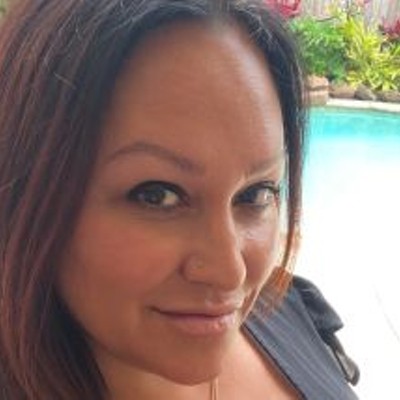