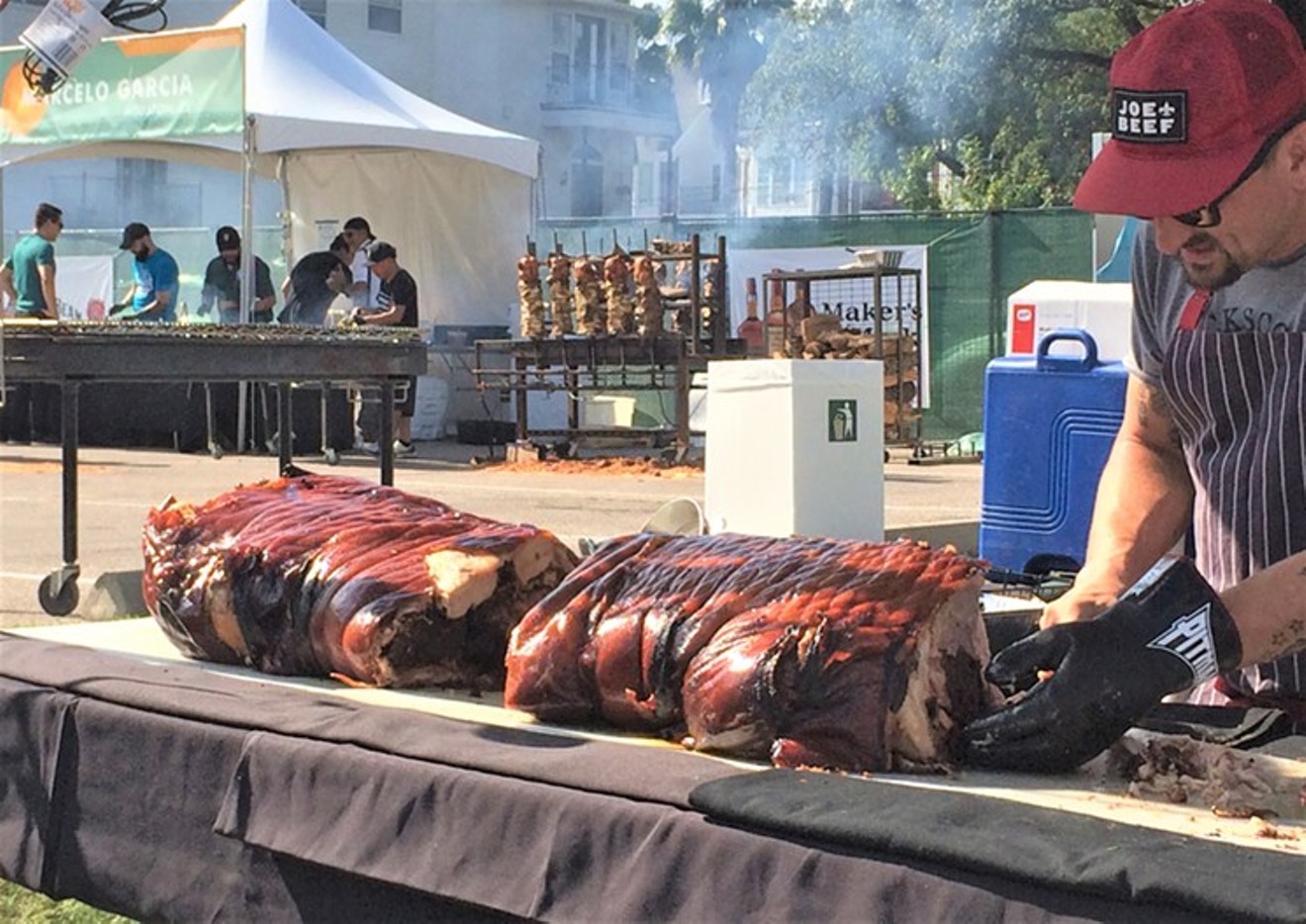 Southern Smoke 2019 included lots of meat, including this massive slab of pork from Chris Cosentino. Photo by Lorretta Ruggiero
Southern Smoke Festival is back this year, after a nearly three-year absence. Due to the COVID pandemic, the fall charity festival from Chris Shepherd's Southern Smoke Foundation was last held in 2019. This year, its organizers have chosen to make the foodie fest's return bigger and better and longer than ever before.

Instead of being a one- or two-day affair, this year's festival covers three days of food, drink and some of the best chefs nationwide, including culinary stars here in Houston. 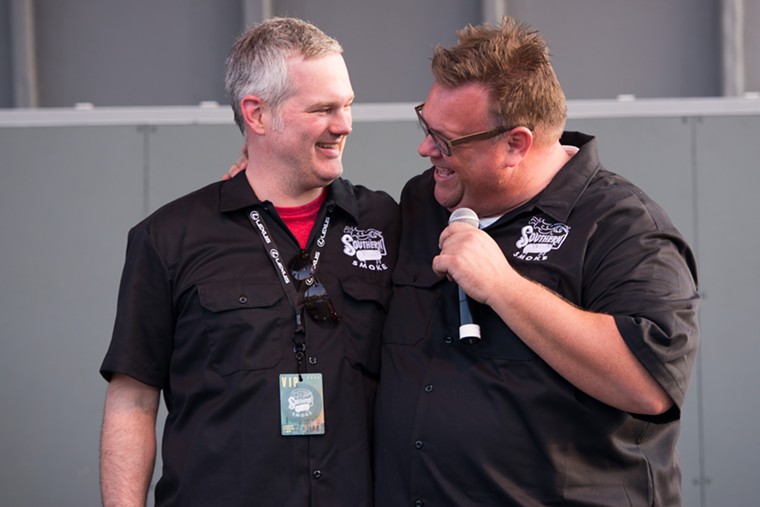 Antonio Gianola and pal Chris Shepherd.
Photo by Catchlight Photography
Southern Smoke Foundation was originally a party thrown by James Beard Award-winning chef Chris Shepherd and some of his chef and pit master friends to raise money for Shepherd's friend and former sommelier, Antonio Gianola, after learning that Gianola had been diagnosed with Multiple Sclerosis. That party raised $181,000 for the MS Society. For a couple of years, the MS Society was its sole focus.

Each year, the event grew with chefs from all over the country participating. When Hurricane Harvey hit the Gulf Coast of Texas and flooded much of the Greater Houston area, the SSF organizers saw that there was a desperate need for many in the food and beverage industry whose businesses and jobs were adversely affected. The foundation expanded its focus and began to assist many people in the industry including chefs, line cooks, servers, farmers and many more. Aid has been given to individuals in need for medical care, natural disasters and financial help in surviving the COVID pandemic. 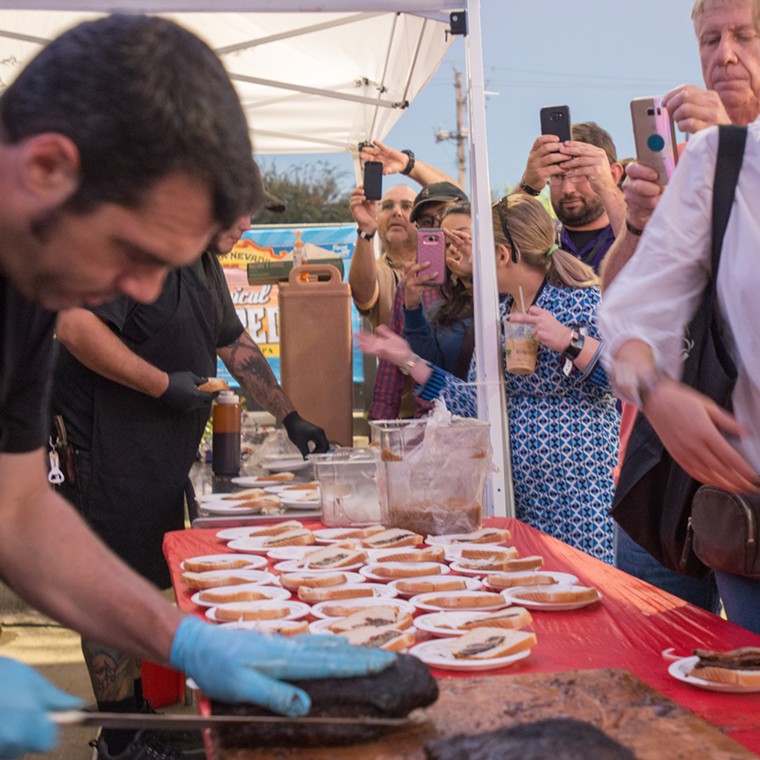 "Hey, it's Franklin!"
Photo by Catchlight Photography
Its outreach includes not only Houstonians and Texans, but other industry professionals in cities like Chicago and the rest of the country. This past July, Shepherd announced that he was leaving his beloved Underbelly Hospitality group to focus more on the Southern Smoke Foundation and increasing its charitable footprint.

With the bigger mission comes a bigger festival and this year's includes three star-studded foodie events that has something for everyone and everything for someone who buys the Baller Pass. That's the $2,000 ticket for all three events and we hear it's sold out.

We have the run-down for each event: 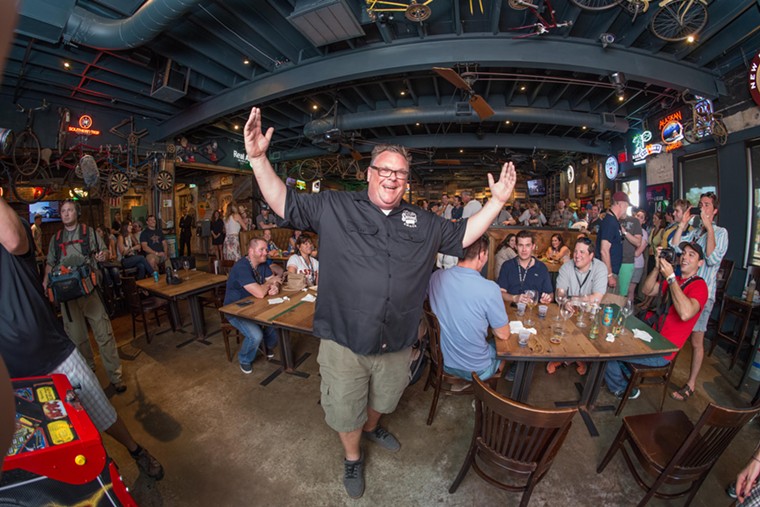 Chris Shepherd is ready to get this party started.
Photo by Catchlight Photography

The opening party starts off with a night of amazing food and music. Hosted by Franklin BBQ's James Beard Award-winning pit master Aaron Franklin and Hot Luck Fest, it will take place in the historic 1933 building overlooking Hermann Park Golf Course. Chris Shepherd will be headlining the event with Top Chef judge and food writer, Gail Simmons, making Pastrami-smoked Turkeys. There will also be talented chefs from across the nation dishing out delicious bites in the courtyard garden. Paola Velez will be serving a Tamarind Rainbow Cookie while Mason Hereford will have a Collard Green Melt. Guests will also be able to enjoy Tuna Sashimi from Jordan Rubin and Mushroom Chicharron with Single Origin Chevre from Chad Houser.

Music will be provided by Robert Ellis, DJ G-Funk and Me Nd Adam. 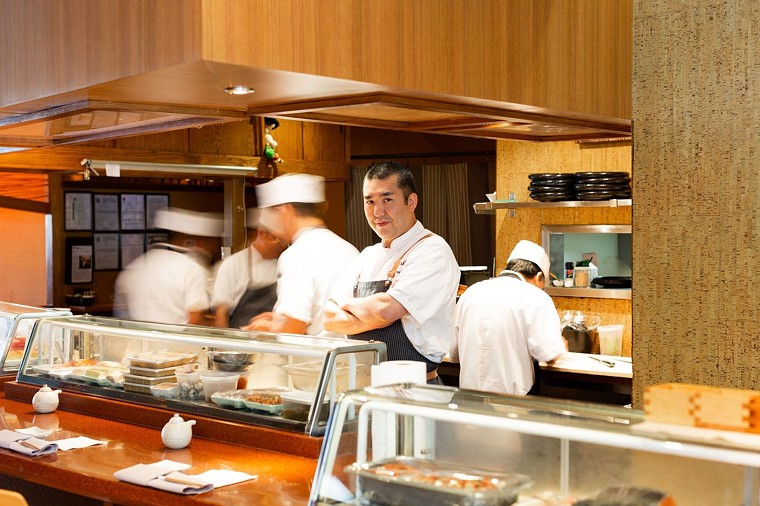 Chef Hori will be breaking it down at Southern Smoke on Ice.
Photo by Julie Soefer
Southern Smoke On Ice
The Manor House at The Houstonian
Saturday October 22, 2022
SOLD OUT

Unfortunately, this event is sold out but the lucky folks who dished out 1,000 smackeroos will be able to dine on a raw bar filled with seafood, watch Manabu Horiuchi of Kata Robata break down a whole tuna, and sip on high end wines and champagnes.

This event is the more laid back, outdoorsy affair that Southern Smoke regulars are used to in the fall. However, there's even more food than ever before with over 40 chefs cooking over pits, live fire and any other heat source available. And the culinary talent is not limited to just Houston chefs. There are award-winning and renowned chefs from across the U.S. including Tom Colicchio, Karen Akunowicz, Jamie Bissonette and Claudette Zepeda. Of course, there are plenty of Houston restaurants representing as well with Aaron Bludorn from Bludorn, Dawn Burrell from Late August, Leonard Botello IV from Truth BBQ and Chris Davies from Underbelly Hospitality. And many, many more. It's like a roll call for James Beard Award, Food & Wine magazine, Top Chef and Iron Chef winners.

Chef Sarah Grueneberg will throw down Scamorza Stuffed Kale Palotte.
Photo by Alexis Reaves
While the bites on offer are too many to list here, a sampling of yum includes Jerk Chicken with Pineapple Glaze from Tavel Bristol-Joseph, one of Food & Wine's Best New Chefs 2020, and Whitefish Clam Ceviche on the half Shell from Fermin Nunez, a Food & Wine Best New Chefs 2021 recipient. The live fire offerings include Pork Hot Links & Chow Chow Peas from Erick Williams, the award-racking-up Chicago chef who was named James Beard Awards Best Chef 2022:The Great Lakes and Lil Brisket Sandos from Aaron Franklin, the super-popular pit master/chef whose lines always seem endless at the Southern Smoke Festival. Stephanie Izard, the first female winner of Bravo's Top Chef, in 2008, will be serving up Grilled Chicken Wings with This Little Goat Chili Crunch while Brooklyn's Bill Durney of Hometown Bar-B-Que will have Smoked Lamb Belly Banh Mi.

Live music from Maggie Belle, Disko Cowboy and Shakey Graves will have folks dancing from chef to chef. There will be wine, spirits, beer and cocktails plus plenty of non-alcoholic beverages to keep everyone hydrated as they wander about in a state of foodie euphoria.

Attendees can bid on a backyard barbecue with these two guys.
Photo by Catchlight Photography
In addition, there will be a live auction to benefit the Southern Smoke Foundation with amazing items like two tickets to Jimmy Kimmel Live paired with a stay at the Beverly Wilshire, a Franklin's BBQ Pit, a wine-focused trip to Burgundy, France, a pizza party at Chris Shepherd's house with Chris Bianco, a backyard barbecue with Shepherd and Aaron Franklin and a VIP experience at Aspen Food & Wine. There are also bottles of Pappy Van Winkle and other items up for auction as well.

Tickets, along with the full list of participating chefs and other important information can be found at southernsmoke.org.
KEEP THE HOUSTON PRESS FREE... Since we started the Houston Press, it has been defined as the free, independent voice of Houston, and we'd like to keep it that way. With local media under siege, it's more important than ever for us to rally support behind funding our local journalism. You can help by participating in our "I Support" program, allowing us to keep offering readers access to our incisive coverage of local news, food and culture with no paywalls.
Make a one-time donation today for as little as $1.