Pink Princess and Jello With Mayonaise: The Wild and Wonderful Foods of Thanksgiving The plate that launched a thousand fits. Note the absence of Five Cup Salad ... Photo by Nicholas L. Hall
The Thanksgiving table is pretty consistent from house to house, family to family. Turkey, stuffing, green bean casserole. Lather, rinse repeat. It's a meal defined almost exclusively by tradition. The same things, in the same ways, year after year after year. At least in the basics.

Within the broad strokes of the turkey template, there's plenty of regional and familial variation. Just as most every family follows the general plan, it seems most every family also has its thing. That one, kind of off-kilter dish that makes their meal special, that makes it theirs. Sometimes, those dishes are beloved by the whole family, cherished recipes handed down through the generations. Sometimes, they're a mixed bag of devotion and disgust. Always, they provide familial definition to a universal meal. Without them, it just wouldn't be Thanksgiving.

In my family, that dish is Five Cup Salad. It's an oddball concoction of sour cream and canned fruit, broadly belonging to the Ambrosia category. It has graced our holiday tables as far back as I can remember, showing up not only for Thanksgiving, but Christmas, Independence Day, and once for my daughter's birthday, by special request. Over the years, we've taken it slightly for granted. So much so that my mom, dismayed at the volume of leftover Five Cup a few years back, decided nobody would miss it. November 26, 2015: The Thanksgiving Day that will live in infamy. There was open insurrection. The next year, she made a double batch. You wouldn't believe the leftovers.

Combine all ingredients in a bowl. Get seconds, or my mom will be mad at you.
*Mom recommends doubling up on the mandarins. Somebody complained once ...

I find these dishes fascinating. I find the family obsession with them even more so, especially when it comes as a combination of love and loathing. I reached out to a handful of Houston's food and beverage pros, to get a feel for how the folks who feed Houston the rest of the year feed themselves for the holidays. Some of their replies were delicious. Some were hilarious. All of them spoke to the value we place on our traditions, even when they're kind of goopy.

Chelsy Magee, bartender at Starfish, definitely falls into the goopy camp. Her family calls their special dish "Pink Princess." It's kind of a kissing cousin of Ambrosia, with a decidedly sweeter tooth. "It’s so bad for you, but I can’t turn it down," says Magee. "My aunt has made us this “Pink Princess” since before I can remember, and it was a recipe from a friend of hers. I can’t turn it down. It’s like that fruit cake nobody wants to receive for Christmas, but you can’t help but take a bite."

1 large container of cool whip
1 can of strawberry pie filling
1 can of sweetened condensed milk
pecans to taste
Mix all together the night before and let chill in the fridge.

Kehlen Scott, from Anvil Bar & Refuge, takes her sweet tooth in a different direction, with a dish that takes some people by surprise. "My Mom’s side of the family brought [noodle kugel] over from Germany when they arrived during the Great Depression. My great oma always made it, so my oma made it and my mom too." Scott says it can take some convincing, with folks balking at a sweet twist on what most expect to be savory. "It is just such an odd dish. A sweet warm noodle casserole with cottage cheese, spices and raisins. I’ve never seen it at another Thanksgiving table, but those who come to ours are immediately won over by it." Of course, that winning-over comes with a subtle side of motherly insistence, as is often the case with the foods we learn to love. "With my mom staring them down, no one refuses."

Tish Ochoa, co-owner of Heights favorite Melange Crêperie, has had her family's unique holiday dishes on the brain lately. "I was just talking about our Thanksgiving jalapeños. Are those not tradition everywhere?" After Ochoa's description of the snacks — a sort of refined jalapeño popper - they just might be.

"Those jalapeños are a longtime family tradition, and we’ve made them since I was a baby. They were a specialty of my grandmother's and are the most popular dish on the table!" To prepare them, Ochoa's family roasts jalapeños, stuffs them with cream cheese, double-dips the stuffed chiles in beaten egg white and fries them. "They're amazing," says Ochoa. "It’s not thanksgiving without them. All the children in our family grow up eating them. My grandma died a few years ago, but we still always have them on the table, and they are a shared family recipe."

Not Tyler Horne's Grandma's Jello Dessert ...
Rod Herrea
Tyler Horne, Director of Farmers Markets at Urban Harvest, is lucky enough to have his grandmother around still. She's responsible for one of Horne's favorite parts of Thanksgiving, though the rest of his family may not agree so enthusiastically. What is this contentious holiday specialty? "Cranberry jello "salad” with mayo and iceberg lettuce layers. Everyone in my family hates it, except me," says Horne. "This is the 1950’s version of salad with the trifecta of processed foods: jello, cream cheese, and canned fruit."

A lot of our traditional holiday foods seem culled from promotional cookbooks of yesteryear, from the infinite variations of Ambrosia to condensed soup specialties like green bean casserole. While the culinary pedigree of such dishes might be suspect, the emotional one is not. "Everyone in my family basically thinks it’s disgusting, but it’s the only thing my grandma makes each year, and at this point it’s become something we all look forward to," continues Horne.

Combine jello, cranberries and pineapple. Divide and let set in the fridge for a few hours. Once set, Combine cream cheese with crushed pecans and spoon a layer on top of the jello. Pour remaining jello mixture and allow to set. Serve on a piece of iceberg lettuce.

Sometimes, the foods of our festive eating are so ingrained in tradition that they simply cannot be infiltrated. There's not a "weird" dish on the table, but any would-be interlopers are automatically given that label. For someone obsessed with food, this back-and-forth can almost become its own tradition. That seems to be the way of things for Adrienne Byard Hastings, Craft Spirits Specialist for Republic National Distributing Company. "My family’s Thanksgiving is as traditionally white people as you can get," says Hastings, who has tried, unsuccessfully, to shake things up. "Turkey, mashed potatoes, sweet potatoes with marshmallows, bread stuffing, green bean casserole, cranberry dressing, corn. We always have deviled eggs and crudite to snack on."

The closest Hastings has come to success was convincing her mom to ditch the powdered gravy in favor of scratch-made; she is now the family's designated gravy-maker. Her other efforts have not been as successful. "I tried to introduce some maple-roasted acorn squash one year and they STILL won’t let me live it down," she notes. "Until I take over full control of Thanksgiving, slowly introducing some new items will have to be put on pause! And believe me — the acorn squash will make a comeback!" 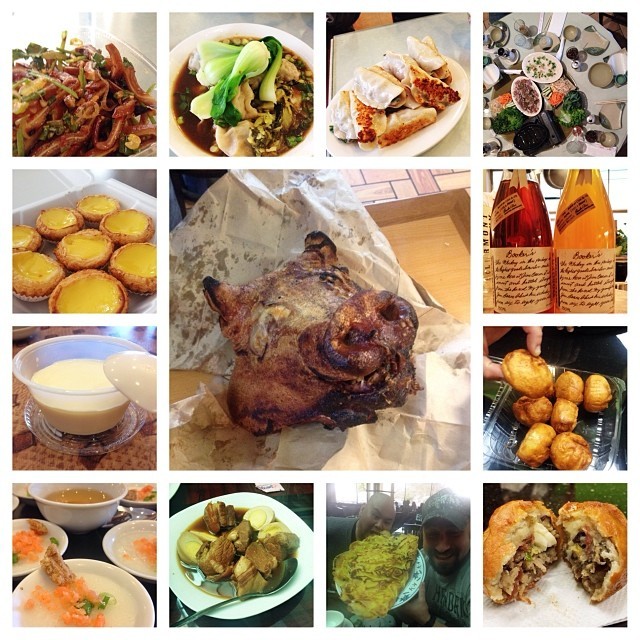 Alvin Schultz prefers a Thanksgiving crawl through Chinatown to a more "traditional" sit down meal. Fried banh bao pictured bottom right.
Courtesy of Alvin Schultz
Of course, not every Thanksgiving tradition involves cooking. For Alvin Schultz, chef/partner at Mind Body Fuel, Thanksgiving has taken on an entirely new tradition. "It started w JJ [chef Jonathan Jones] and I not really liking traditional thanksgiving food and wanting to crawl Chinatown because everything out there stays open on holidays," says Schultz, who has been organizing his Chinatown Thanksgiving crawl for the last five years or so. "The fried bao from TP Banh Bao is the perfect savory (slightly sweet) starter, crispy and fried, decadent 3-4 bites to start a celebration," continues Schultz.

Schultz's crawls frequently begin at TP, both for the impeccable appetizers and as a convenient bit of timing. "Sometimes they take a while to fry so we use TP bao as a point where everyone can meet- whichever group is there first will order 10-15 depending on how many people we are expecting. They hold up pretty well so we’ll order extras and bring them to the later stops for people that join late." As for why the bao in particular defines Schultz's unorthodox Thanksgiving meal, Schultz points to their uniqueness. "I’ve never seen them fried outside of Houston, or even TP bao specifically so it really eats like a local Houston Chinatown delicacy. Have you eaten it? It’s so freaking good it belongs in every meal."

That last bit has always been one of the funny things about Thanksgiving, to me. We look forward to the meal all year long. We plan meticulously. We shop, and we prep, and we cook for hours. We express our never ending devotion to the various foods that grace our tables. Then we table those foods for an entire year. Why? I suppose part of it is the preservation of the specialness those foods get by virtue of their infrequency. If we roasted a turkey once a month, it wouldn't have the same pomp and circumstance. Our infrequent indulgence may well preserve those foods in another way. Once a year, we can all wax rhapsodic about cranberry-cream cheese aspic, or "weird Pink Princess fluff." Once a month, those oddities might lose their liturgical luster. That doesn't mean you can stop making Five Cup Salad, mom.
KEEP THE HOUSTON PRESS FREE... Since we started the Houston Press, it has been defined as the free, independent voice of Houston, and we'd like to keep it that way. With local media under siege, it's more important than ever for us to rally support behind funding our local journalism. You can help by participating in our "I Support" program, allowing us to keep offering readers access to our incisive coverage of local news, food and culture with no paywalls.
Make a one-time donation today for as little as $1.

Nicholas L. Hall is a husband and father who earns his keep playing a video game that controls the U.S. power grid. He also writes for the Houston Press about food, booze and music, in an attempt to keep the demons at bay. When he's not busy keeping your lights on, he can usually be found making various messes in the kitchen, with apologies to his wife.
Contact: Nicholas L. Hall