Road Trips: Louisiana's Best Boudin And Cracklin' Stops Along I-10 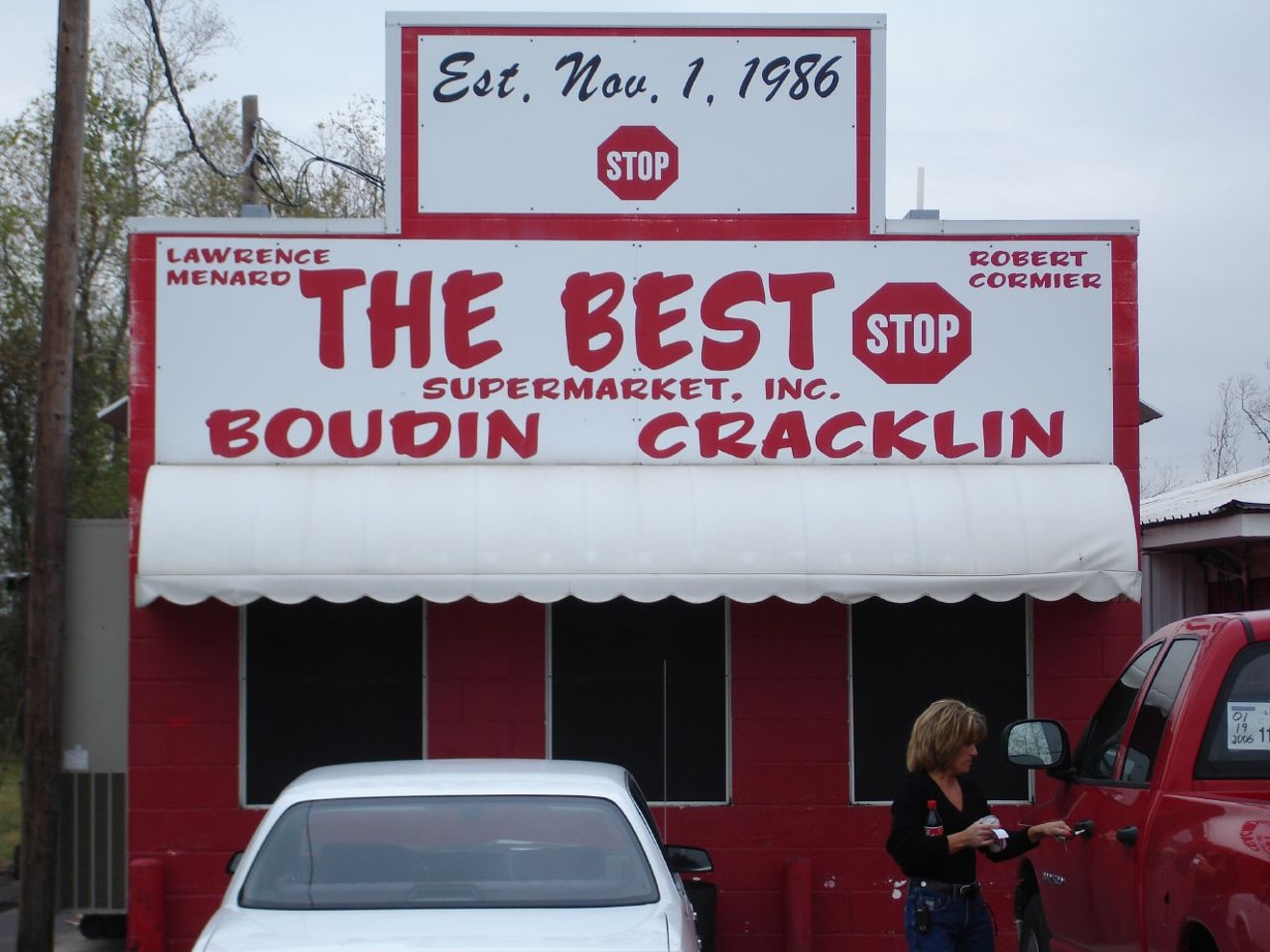 For most boudin fans, it really is the best stop. Photo by Jim Hobbs
Say you're driving east. Maybe you're heading all the way to the coast, or just to Baton Rouge or New Orleans. There are a few vital stops you're going to need to make, besides just gas and rest areas, if you find yourself barreling through Louisiana on I-10 — for meat, Cajun meat, that is.

These aren't the hidden boudin and cracklin gems that you'll get lost looking for. These are actually fairly well-known and respected spots that are easily accessible from I-10 and won't put a huge dent in your travel time. But they all pretty much rule. No complaints here.

For the most part, you can get your boudin, boudin balls and cracklins hot and ready to eat, but the wise traveler will also bring an ice-packed cooler for frozen take-home items that many of these shops also stock — venison sausage, andouille, alligator and more delicacies you can freeze until gumbo season.

While these roadside meat stands are great pit stops on the drive through Louisiana, one might argue that they're even worth the trip alone. Get a little rental cabin in Breaux Bridge or a hotel room in Lafayette and live it up for the weekend. Whatever your modus operandi, here are seven spots you can't miss along I-10. 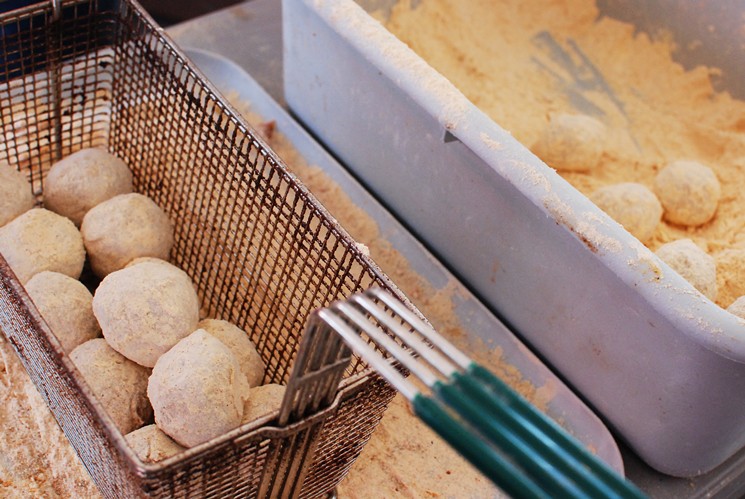 About three hours from Houston exists the bastion of all things Cajun roadside meat, so much so that the town of Scott even hosts the state's lone Boudin Festival every April. Get off here and you'll immediately a) likely get annoyed at the town's unfortunate roundabout and b) be privy to three of the best boudin stops in all of Louisiana. 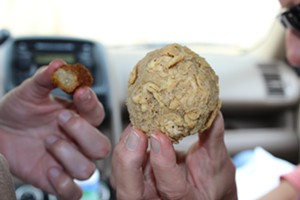 A cracklin and boudin ball from Billy's.
Photo by Gwendolyn Knapp

What you want to do here is order up both the boudin balls, which are about as big as Eight Balls and just as heavy, and of course the ultra-gutbusting cheese- and boudin-stuffed egg rolls. They will blow your mind but hopefully not the seat of your pants.

This is one of the bigger stops for boudin along the highway o' meats. There are several locations, but the one in Scott is the largest and is pretty great; just look for the jester out front.

The boudin and cracklins are both pretty reliable here, and if you're traveling with a lot of people, it's also a good rest stop. But don't leave without ordering the real gem, Natchitoches meat pie, flaky and succulent and everything you want your arteries to be clogged by on the road.

Supermarket of meats, that is. You know how people are mesmerized when they enter a Buc-ee's for the first time? Best Stop has that same appeal for hardcore carnivores. It's here you'll find freezers of take-home meats, including numerous sausages — chaudin, boudin — and even alligator meat. If you prefer a snappier boudin, with a crisp casing, the smoked version is your jam. The fiery pork and rice combine to make my personal favorite in all of Louisiana. It's incredible. The cracklins are some of the best around, undoubtedly. 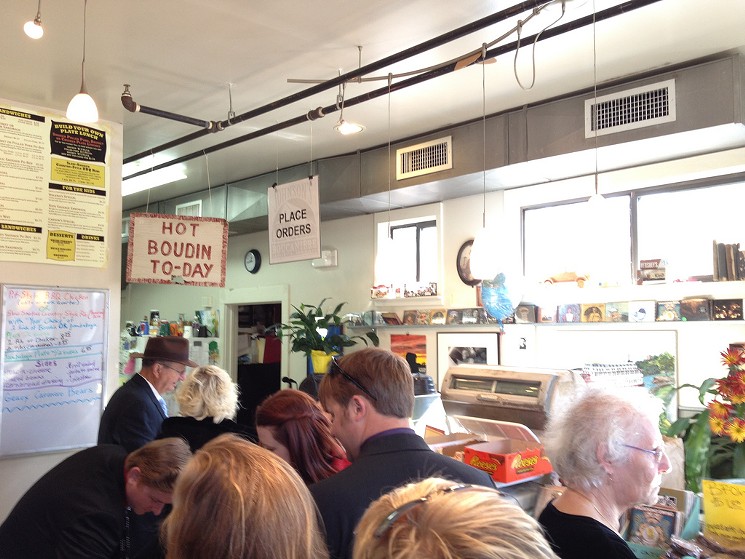 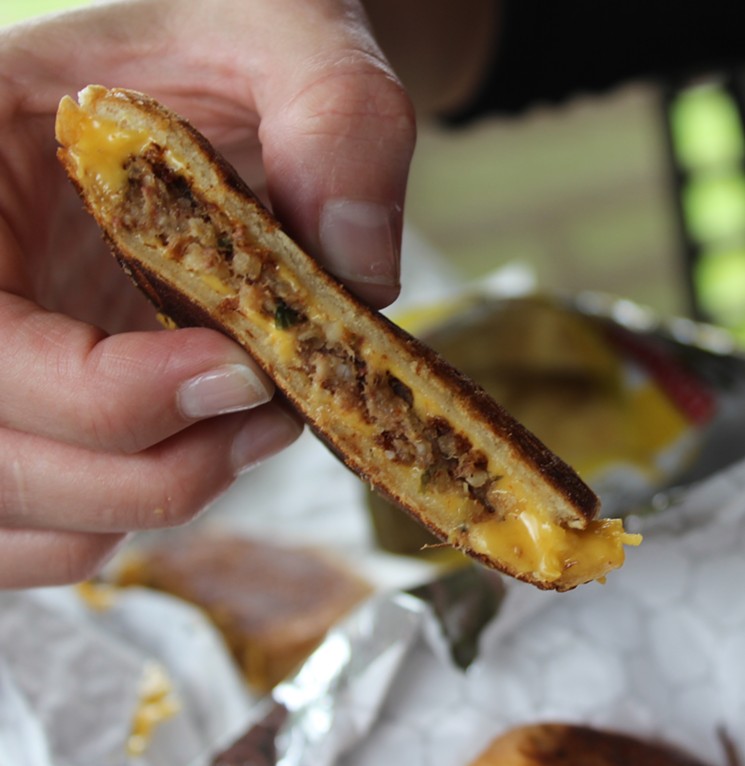 One of the best sandwiches you'll ever eat, the boudin grilled cheese.
Photo by Gwendolyn Knapp
Exit 101: Lafayette

Look for the famous Hot Boudin To-day sign out front, and once inside, do not pass up the boudin grilled cheese. That's right, it's essentially a patty melt made with boudin, except it's also flattened out novella-thin and is likely the most incredible foil-wrapped delicacy on a griddled bun that you'll ever eat. Never have I come across a superior sandwich.

This is a family-run business and old man Johnson still works the counter, with a boudin recipe that harkens back to the Johnson's Grocery that opened in Eunice, Louisiana, in the 1930s. Don't skimp on the bread pudding either. Anyway, just the sight of it on the counter will get you.

Okay, okay. This isn't really about the boudin. It's about the gumbo. The best in Louisiana. If you're jonesing for a bowl, you need to stop. And like all good Cajuns, Prejean's serves its gumbo with a heaping side of potato salad. 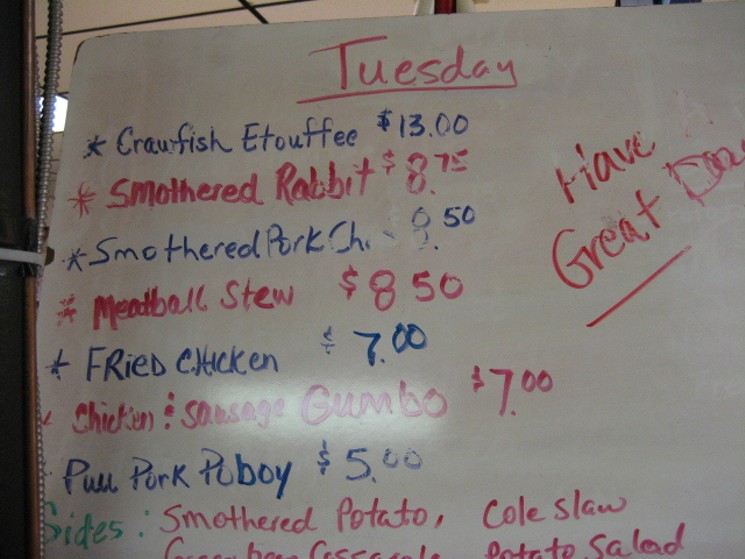 The great thing about Poche's is that it has incredible boudin and boudin noir (in which the pig's blood is also mixed into the sausage, giving it a deep, almost black hue) and all the perks of a Cajun meat market, but the Breaux Bridge favorite also has an incredible cafeteria with tons of daily specials, from smothered rabbit to fried fish, that are worth the stop alone. Definitely plan a trip for lunch, then peruse the coolers of meats to stash in your own cooler, and don't forget to stock up on warm boudin for later on down the highway. 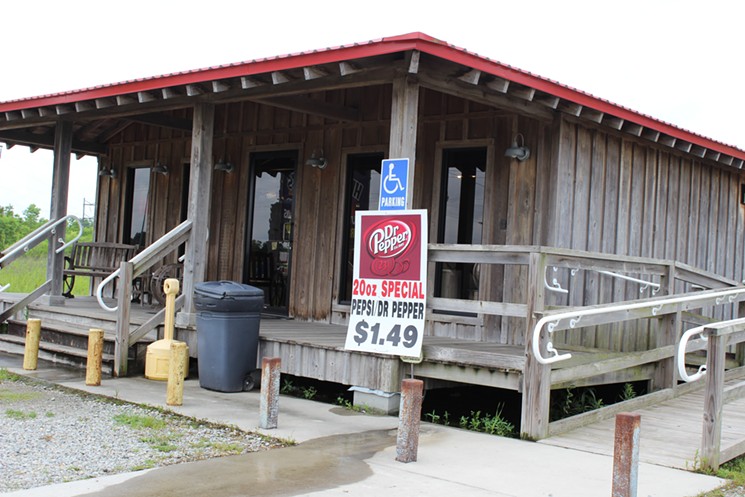 This shack is home to one killer tasso sandwich.
Photo by Gwendolyn Knapp
Exit 115: Henderson

What makes this Cajun shack so great is the drive-through. When you pull up, make sure to order the barbecue tasso sandwich. It comes on soft white bread with tender, incredible tasso — that's smoked pork shoulder — and loads of barbecue sauce and mayonnaise. It's a knockout. But the cracklins make for a good, salty side too.

There's also another gas station-style spot at this exit, Chicken on the Bayou, that does pretty good boudin, including alligator and crawfish versions, but there's usually an insane line. Not so at Hebert's. It's an underrated gem.