A farm to table fantasy realized. Photo by Lorretta Ruggiero

Houston's culinary diversity and bounty of talented chefs is no longer a secret. The Bayou City has popped up more and more in national food magazines and television shows and each time, the hosts and journalists find themselves "surprised" that Houston is a cradle of global cuisine with an intimate small town feel.

And now Bravo's Top Chef televised cooking competition has made its way to Houston, filming on location all around the city and featuring a number of our chefs, restaurants and local celebrities while contestants vie for the title of Top Chef. Houston only has one chef in the current competition and that chef is Evelyn Garcia (Kin HTX). So far, she is still a strong competitor and the most recent airing of episode 9, Freedmen's Town, shows that she has the potential to make it to the top of the pack. Grumman, Garcia and Burrell are a wonder trio.
Photo by Bob Ruggiero
Our city's chefs and restaurateurs have been racking up acclaim such as the James Beard Award nominations and awards for the past decade. And while female chefs have always been a part of our culinary make-up, recently the sisters are doing it for themselves on the national scene and making their skills known. Last season's Top Chef Portland featured two of Houston's best chefs, Dawn Burrell (Kulture, the upcoming Late August) and Sasha Grumman ( Rosalie, Sasha's Foccacia). Burrell made it to the top three. So, someone came up with a great idea to put the talents of these three Top Chef contestants, Burrell, Grumman and Garcia, together for a night, not in the heart of downtown Houston, but in the northern reaches of Spring at CityPlace Marriott. While many inner loopers are loathe to make a drive into the suburbs, those who did for The Butcher's Ball Spring 2022 Farm to Table Dinner, that was held April 29, found themselves dining on a spectacular four-course meal in a fairy tale setting. The dinner also launched the inaugural HTX Whiskey Weekend at CityPlace, a three-day event of whiskey and chef-driven food. Farm to table goes posh at CityPlace.
Photo by Lorretta Ruggiero
I've often found myself gaga over the farm to table articles that occasionally pop up in my Food and Wine or Bon Appetit magazines. I've watched numerous television shows about chefs afield and moveable feasts, drooling not only over the food, but the whole ambiance of an outdoor feast. The Butcher's Ball dinner that evening was straight out of a magazine shoot with stunning floral displays, long wooden tables and distressed ivory-colored chairs. It was like going to a rich cousin's wedding but with much better food. A team member keeps an eye on the beef cheeks.
Photo by Lorretta Ruggiero
And the weather could not have been any better. With a view of the manmade lake, which also had a nice breeze coming off of it, it was a perfect setting for dining al fresco and a blessed relief for the teams working the live fire grills. The chefs and their crews could be seen working away while guests wandered with a glass of prosecco from California's Jonata or an Old Fashioned provided by MKT Distillery out of Katy, Texas. The prosecco was drier than most with less sugar and a light crisp taste for an aperitif. The Old Fashioned was beautifully smooth and made a whiskey fan out of my companion. 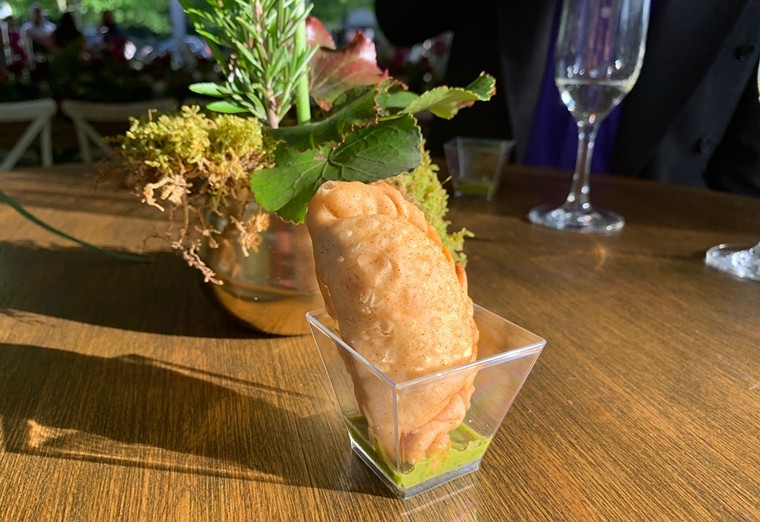 The sun shines on a solitary empanada.
Photo by Lorretta Ruggiero
We were offered empanadas as an appetizer, which was a bit strange considering that the event listing said  appetizers would be provided by Sushi Rebel's chef Daniel Chang. I am going to go out on a limb and say that the empanadas, which were perfectly serviceable, were not a Chang creation. They could have used a bit more of the piquant green sauce provided to give them a needed burst of flavor.


Dinner itself was a little later than we expected so we availed ourselves of another glass of prosecco, generously offered by Natalie Vaclavik, National Sales Manager at Jonata and also The Hilt, which would be providing the wine pairings for the evening. Vaclavik was the perfect ambassador for the wines. She was a vineyard nymph keeping glasses filled and bonhomie flowing. Snapper Aguachile was a perfect spring dish.
Photo by Lorretta Ruggiero
Finally, the first course was served and it was a vibrant and colorful Snapper Aguachile from Garcia. Edible flowers and thinly-sliced radishes were a perfect complement to the bright green liquid. The crispy plantains added some crunchy texture to the soft slices of snapper. I could have had just the broth alone and felt happy and healthy. It was a beautiful way to start a meal and the 2018 Hilt Estate Chardonnay was perfect pairing, allowing the dish to shine. The chardonnay was more citrus and honey than butter and oak, something I greatly appreciated. These meaty mushrooms come from Tomball.
Photo by Lorretta Rugiero
Each chef appeared before her course to describe it. The second dish was from Grumman, whose nom de plume, The Fierce Chef, fits her. She's a burst of energy and an advocate of using local ingredients. Her course was a plate of funghi from Lone Star Mushrooms, which is located in Tomball. The King Oyster mushrooms were smoked and  several of my tablemates thought they were eating meat when they bit into them. They were accompanied by potatoes and topped with preserved lemon dill yogurt, getting a kick of spice from the zhug, a Mediterranean herb and spice blend that is in keeping with Grumman's culinary style. The 2018 Hilt Estate Pinot Noir had a smooth fruitiness that counter balanced the spice but was bold enough to pair with the meaty flavor of the mushrooms.

The Sophia Johnson Band kept the tent swinging.
Photo by Lorretta Ruggiero
It was a long, languid affair and the band eventually took the stage. The Sophia Johnson Band is out of Austin and the Texas Swing tunes fit in perfectly with the outdoor farm to table vibe. Johnson is a native of Birmingham, England and her sweetly plaintive voice is accompanied by her mean guitar skills, whether she's singing a Patsy Cline tune or jamming a Bob Wills song along with her bandmate's steel guitar. We enthusiastically enjoyed the band and Houston Press readers can expect that Classic Rock Bob Ruggiero will have more to say (and more expertly) about them in the future. Suya flavors mingle with live fire heat at The Butcher's Ball.
Photo by Lorretta Ruggiero
Chef Burrell took the stage to introduce her dish, a plate of Suya-dusted Beef Cheeks which we had seen cooking on the fire earlier. While suya is the name of a West African skewer dish, it is oftened used to describe the blend of spices which can vary but usually include dried peanuts, garlic powder, ginger and chiles for heat. Burrell's version definitely had some heat and the live fire application gave a beautiful crust while still allowing the meat to be tender on the inside. The tomato corn curry was a flavorful accompaniment, as well as a dipping sauce for the meat. The 2016 Jonata Fenix Red Blend held its own with the strong taste of the spices. Chef Burrell hugs her sister Valerie after delivering her course.
Photo by Lorretta Ruggiero
Burrell described her dish as a preview of what diners can expect to see at her upcoming restaurant Late August at the Ion. While guests will find flavors that reflect the African diaspora, chances are Burrell's earlier stints at places like Tyson Cole's Uchi will mean some Asian influences as well. As for when the restaurant will open, my lovely dinner pal and Burrell's sister, Valerie, said that she thinks it may be, fittingly, late August of this year. 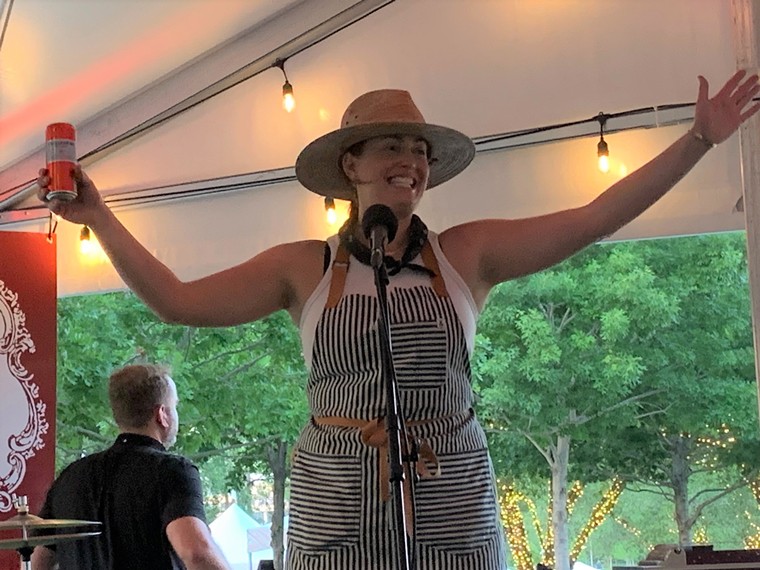 The Fierce Chef introduces her mushroom dish.
Photo by Lorretta Ruggiero
The final treat of the evening was a Berry Crumble from Grumman, topped with a Sweet Corn Ice Cream by Burrell. The menu listed a Fish Sauce Caramel from Garcia as well, but if it was there, I didn't really taste it. It was a down home dessert for a farm to table experience and I wish my appetite had not been so completely satisfied that I could not do it justice with more than a few bites. The team from Still Austin Whiskey Co. is the bee's knees.
Photo by Lorretta Ruggiero
The band ended their set, the chefs made the rounds and the evening ended with guests heading to the lakeside area for cigars and whiskey tastings. The next day's events were to include more whiskey sampling along with chefs creating tasty bites. The first HTX Whiskey Weekend was off to a fine start and the CityPlace area was a pleasant retreat for the evening. The development is a bit behind on adding all the restaurants and businesses that were planned, due to the pandemic. However, the CityPlace Marriott itself gets five star online reviews and there are plenty of wooded trails for a city escape. Look for it to be a destination in the future. The chefs have a laugh after a hard day's night.
Photo by Bob Ruggiero
And the event's organizers were wise enough to bring in three of Houston's top chefs and the folks from The Butcher's Ball to provide guests with a memorable evening.
KEEP THE HOUSTON PRESS FREE... Since we started the Houston Press, it has been defined as the free, independent voice of Houston, and we'd like to keep it that way. With local media under siege, it's more important than ever for us to rally support behind funding our local journalism. You can help by participating in our "I Support" program, allowing us to keep offering readers access to our incisive coverage of local news, food and culture with no paywalls.
Make a one-time donation today for as little as $1.