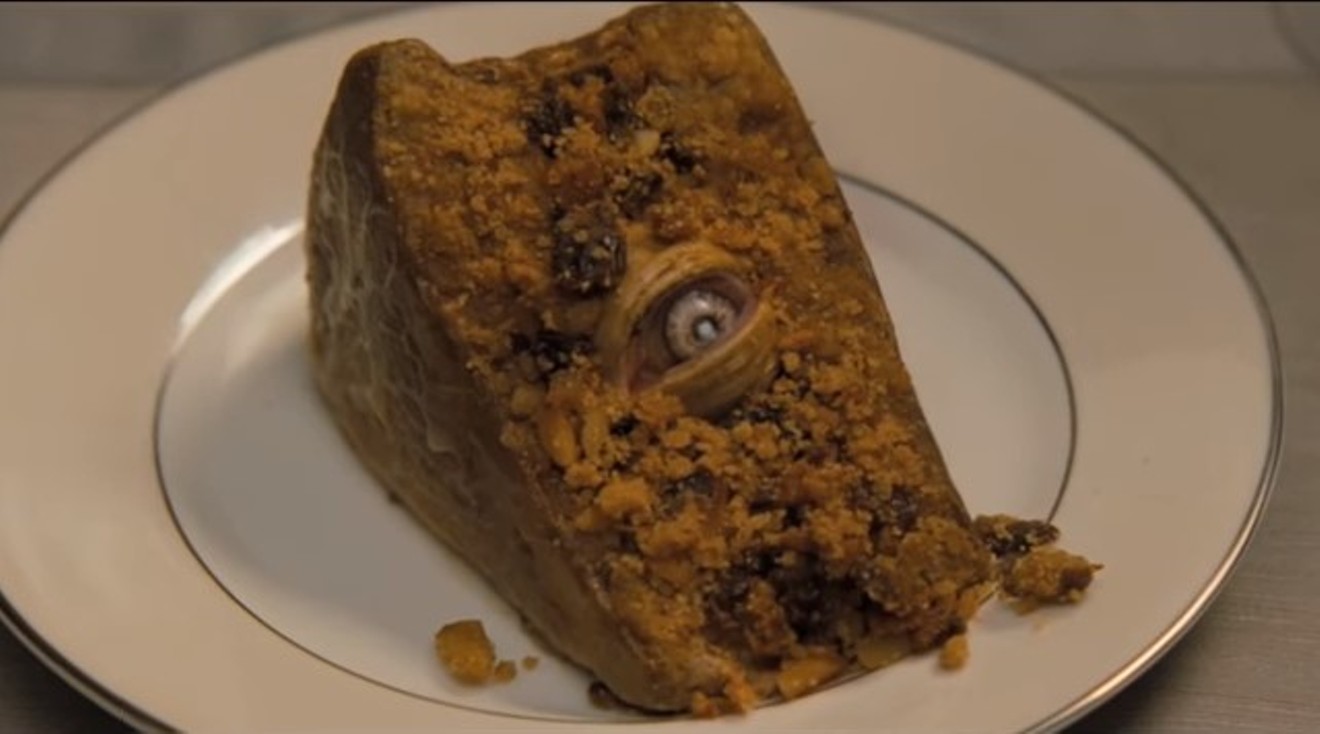 Autumnal eyeball cake, anyone? Photo courtesy of Movie Clips/Youtube
It seems like it would be an easy task, but no, whittling down the numerous gross and mesmerizing horror film food scenes is a relatively difficult task.  There are classics, of course, that most horror fans will immediately point to: Dinner scenes from Texas Chainsaw Massacre, Alien, Eraserhead or Alfred Hitchcock's Frenzy, the raw offal consumption by Mia Farrow in Rosemary's Baby, the campy, slow deaths in Attack of the Killer Tomatoes, the Beetlejuice "Day Oh" dance number when that shrimp cocktail becomes a face-hugging monster's hand.

But the following food clips dig a little deeper into the horror film genre.  There was no greater decade that embraced sick food scenes than the gore-loving '80s. Food also plays a big role in horror comedies. Here are ten great scenes to check out before Halloween, and one even comes with its own recipe.


10. What Ever Happened To Baby Jane?

A bold essay in the art of the macabre is how this movie was described in its original trailer.  While the movie is famous for resurrecting the careers of its stars and known rivals Bette Davis and Joan Crawford, as well as exacerbating their feud—  Davis was nominated for an Oscar for her role as Baby Jane, and Crawford allegedly campaigned against her, even accepting the award for winner Ann Bancroft  — this psychological horror still holds up as one of the greatest, campiest films ever made, with one killer food scene. There's nothing more glorious than hearing Davis utter the classic line "Oh, Blanche. You know we got rats in the cellar?" while serving up lunch on a platter.

Nothing like a good old gypsy curse to ruin dinner. Such is the case in Drag Me To Hell, the 2009 comedic horror film from writer and director Sam Raimi, who also did the Evil Dead remake, a sure sign he is a devotee to horror comedy. Over dessert, doomed loan officer Christine manages to stab an eyeball, soaking her plate in blood, and almost chokes on a fly, which she then burps up much to the detestation of her boyfriend's mother. Not too traumatizing an evening for a main character that's also been forced to sacrifice her own kitten.

Fans of the movie will be happy to know that they can recreate the harvest cake via this handy online recipe, say, for an upcoming Halloween party. Don't forget to invest in a cool edible eyeball, or make your own with the family.

Spoiler alert: Typically innocuous beverages play a big part in the horror of Jordan Peele's directorial debut, Get Out, also of the horror comedic bent, albeit with a deeper, satirical lens aimed at racism.  White hypnotherapist Missy sends her daughter's black boyfriend, Chris, into the "Sunken Place" via her tea-stirring, which will allow a white man to take over his entire body. It's basically enslavement tea. After the guy has been trapped and ready to have his body snatched by the evil family, the daughter then takes time to hunt for more black men online in her bedroom while enjoying a big glass of milk with Froot Loops. It's all truly terrifying. But the twist ending is so worth enduring the torturous build up.

There was a time when actors named Cory were still on top of the world and vampires with LA rocker mullets ruled the box office. The year was 1987 and any kid that saw Joel Shumacher's classic Lost Boys surely remembers the beloved scene in which head vampiro David, played by a platinum pre-Young Guns Kiefer Sutherland, serves up some gnarly Chinese food that leads poor protagonist, Michael, into thinking he's eating  maggots and worms.