Tales From The Top Shelf: Baijiu 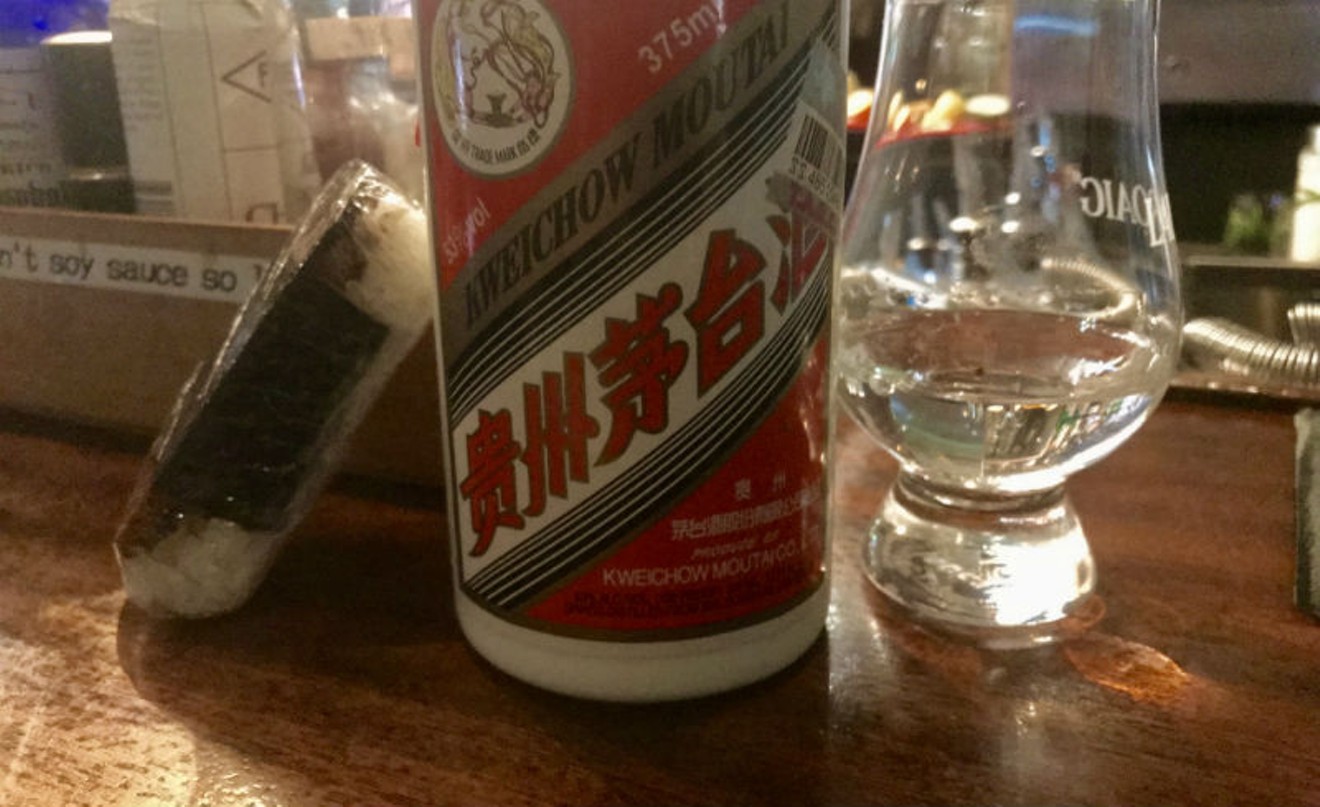 Oh hey there spam musubi looking all sexy. Stop it. No you stop it. Photo by Kate McLean
Though it’s the most widely consumed spirit in the world, Baijiu isn’t exactly flying off the shelves in America. It doesn’t appear on too many cocktail lists either—even the chichi ones. Baijiu is more of an acquired taste; a mysterious circus of both scent and flavor all masked in the pristine appearance of something more neutral, like vodka.

In 2013, the “westernized” version “Byejoe” was released in an effort to charm the American market. Cute, thanks China. A phonetic salute to how the spirit is actually pronounced, Byejoe is “distilled in the east and blended in the west,” and hasn’t quite performed on the market as hoped— though with a population of 1.4 billion sipping Baijiu as their go-to, the Chinese aren’t really sweating it.

Like most spirits, Baijiu has different tiers of quality, and since it isn’t heavily regulated— price is as good a gauge as any. Maotai is the premier brand and considered a major status symbol in Chinese culture. “Imagine it as a gift of prestige—every promotion, or wedding, you gift Maotai. It shows ‘hey, I’m a baller and I appreciate you like a baller, so here is my baller gift,” explains Christopher Huang, owner of Ninja Ramen and Flying Pho. Maotai is available at Ninja Ramen for $30 a pour and the snapshot is totally worth its price tag. Huang also recommends China Place Liquor City for sourcing Baijiu—they treat their Louis XIII like Cartier, jewelry case and all.

Just one shot, clear in a whiskey glass, resembles an epic underwater battle raging deep enough below the surface to reflect nothing amiss. “It ends up tasting very umami— a lot of people compare it to soy sauce. It’s like a non-salty soy sauce,” says Huang. Because of its high quality, Maotai is both clean and complicated all at the same time.

The majority of Baijiu is made from sorghum, though wheat, rice, sticky rice, and corn can be used—and typically it's a blend of a few. During the fermentation process, qu is used in place of yeast which is a unique agent made from mold, yeast, and bacteria that’s been fused together via incubation and dried into bricks. Pretty confusing, but this funky catalyst combined with the use of solid grains (also a rare method) lends to the distinctive flavor. On top of that, the strongest flavored Baijiu is fermented from one to six months. Most fermentations only last a few weeks.

Countless references to the spirit occur throughout Chinese history; Confucius was even recorded rapping about the recipe in 500 B.C. though it wasn’t distilled and recognized as the national liquor until the Yuan dynasty (1271-1368 A.D.) But perhaps it began much earlier than written word with the legend of Emperor Yu the Great and his lover Yi Di.

A long, long time ago—like 2100 B.C.—Yu asked Yi Di, “babe, can you make me a sandwich?” (She was known for making the best midnight sandwiches in all the land.)  Instead Yi Di came back with a grilled cheese AND a bottle of Baijiu, a surprise she had been working on for him anyway. Yu was delighted and they spent the next two days doing ... (what?) And that’s how it all began or at least how the legend has been interpreted by some. The End.
KEEP THE HOUSTON PRESS FREE... Since we started the Houston Press, it has been defined as the free, independent voice of Houston, and we'd like to keep it that way. With local media under siege, it's more important than ever for us to rally support behind funding our local journalism. You can help by participating in our "I Support" program, allowing us to keep offering readers access to our incisive coverage of local news, food and culture with no paywalls.
Make a one-time donation today for as little as $1.