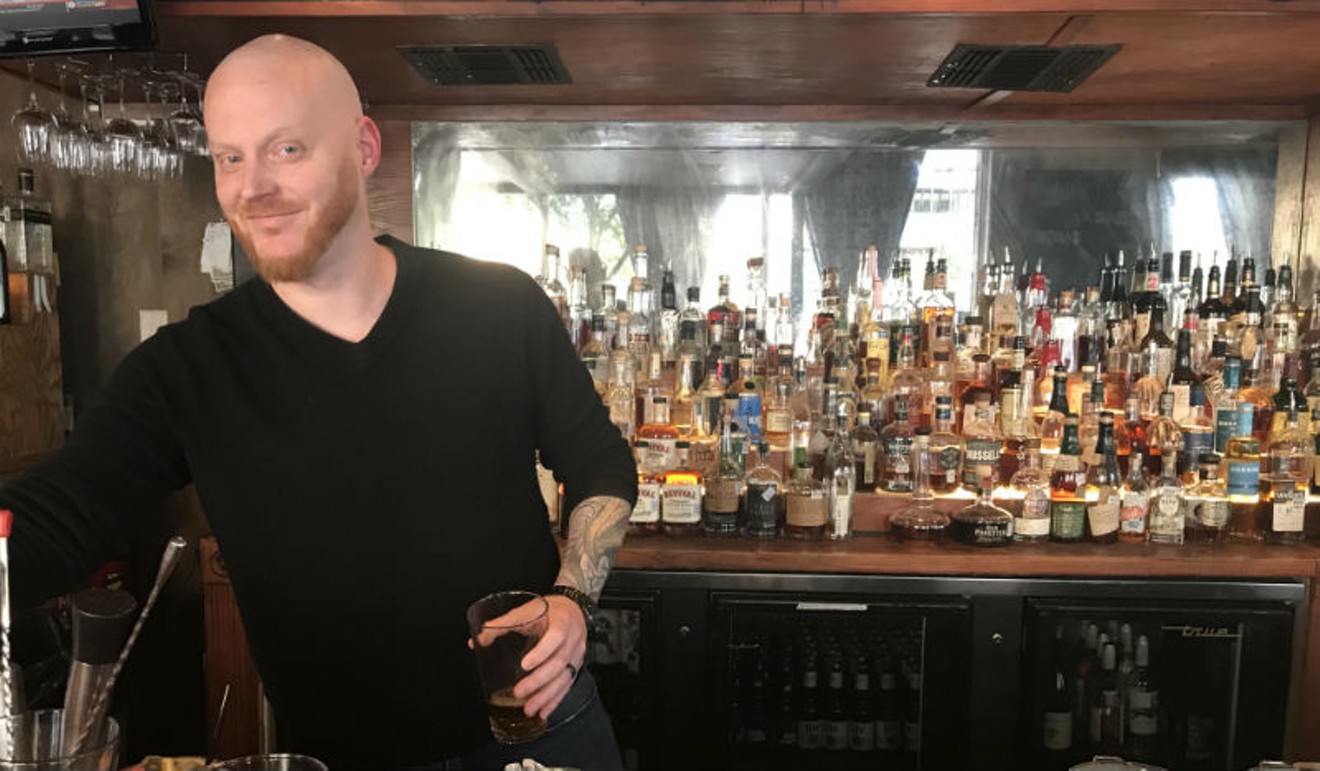 Jace VanHoozer Photo by Kate McLean
At 40 years old, Jace VanHoozer has been bartending for half his life. “That makes me 127 in bar years,” he said sitting on the tip of the dark leather seat, in the back room of Reserve 101. Eleven years ago, Mike Raymond had approached him about a whiskey bar he wanted to open; the goal being to be the best in the world. Whisky Magazine, Eater, Thrillist; many others would agree he succeeded.

“It’s hard to pass on an opportunity like that; someone who really believes they can make something great.” A few years after that first conversation things fell into place, and VanHoozer joined the Reserve 101 team.

Whiskey excited him, it was something he didn’t know much about. At Dave & Buster’s, after reaching the peaks of management within the No. 1 store in the company at the time, he was influenced by his peers in more ways than one.  “It formed my vision in what I needed as far as accumulating my skills. I knew I needed to put myself in situations I was less than familiar with.” During his nine years behind the bar at Reserve 101, not only has he tasted the majority of the hard-to-find bottles they keep, but he can speak to them as well.

“I was always the talkative kid in class; I liked meeting people, talking to people,” he says. After a year spent at Blinn College, VanHoozer realized that maybe that wasn't the path for him.  Soon after, when he began waiting tables, it clicked. He could meet people and make money doing it.

For VanHoozer, the culture of Reserve 101 is in the cultivation of clientele. “Our TVs are small for a reason. At this stage in the game, what I really like are the third and fourth questions I get to ask. That’s when you get a little more in depth.” VanHoozer strives to make those ordering a Bud Light feel just as comfortable doing so as those who flew in just to taste that limited edition bottle found nowhere else.

“There are three bottles in the nation, is this something you want?” is a question the Reserve 101 team is familiar hearing. VanHoozer explains that, “[because] we have a great relationship with some of the distilleries, a lot of times when something rare is released we have the good fortune of being alerted.”

It’s true, we are in the midst of a resurgence as more and more whiskey-centric bars pop up. Watering holes that have been lucky enough to reach the ten-year mark know it’s an uphill battle as they constantly compete with openings. Reserve 101 will turn 11 in January. “After the honeymoon period, that’s when you know what you’re made of, the whiskey, our knowledge, that’s why our doors stay open.”

Taste around the very big block that is Whiskey at Reserve 101.
Photo by Kate McLean
“Slane’n & Bangin”

Shake with ice, strain, and serve over ice. And just like that, Paul Wall entered the equation. Turn the bass up just a notch.

Well, that's fun.
Photo by Kate McLean
Shot of Advice: I think the most important thing is being able to compartmentalize what's important to you. My career is being a dad, that’s my thing. Twenty years behind the bar, that’s just my job. Also, finding your balance between being overly analytical and being haphazard. That balance is different for everybody.
KEEP THE HOUSTON PRESS FREE... Since we started the Houston Press, it has been defined as the free, independent voice of Houston, and we'd like to keep it that way. With local media under siege, it's more important than ever for us to rally support behind funding our local journalism. You can help by participating in our "I Support" program, allowing us to keep offering readers access to our incisive coverage of local news, food and culture with no paywalls.
Make a one-time donation today for as little as $1.