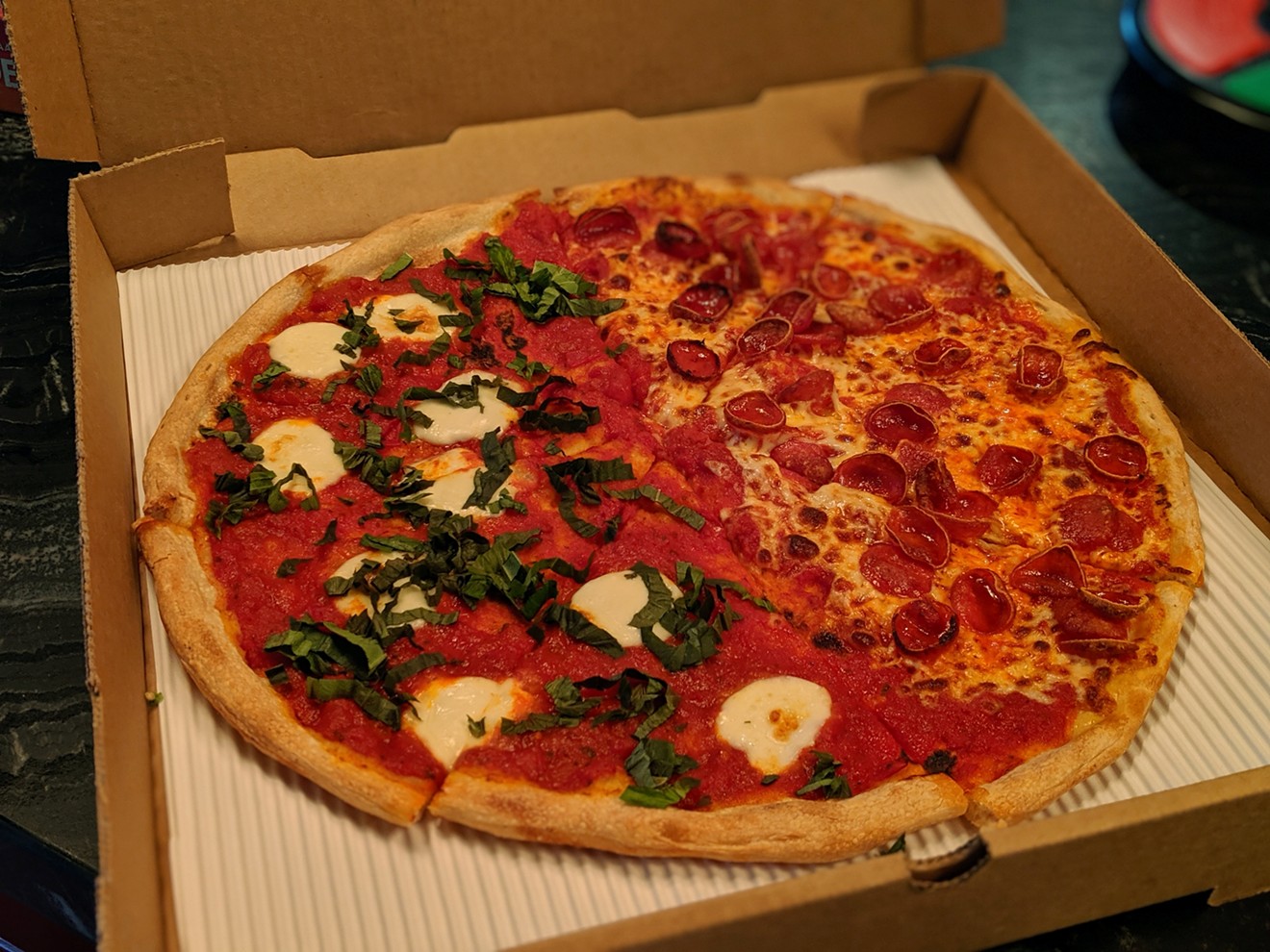 Luna Pizza is a homegrown mini-chain from the owners of Barnaby's Cafe. Photo by Carlos Brandon
As we round out the second month of this weekly column, one thing is becoming more clear with every slice — Houston's pizza treasures are abundant. The city of fajitas and dumplings hides, in plain sight, a sprawling community of pie joints as bountiful as they are delicious. Many of them exist inconspicuously in strip malls and business centers, around the corner neighborhood joints tossing dough for those lucky few in the know, or award winning Italian kitchens making waves in the national food media — this town's got them all.

One of these homegrown pizza gems is a local mini-chain that first popped up a half-decade ago in the shadows of Upper Kirby and has since expanded to three locations. Luna Pizza, a hole-in-the-wall pie joint by the owners of Barnaby's Cafe, serves personal and large Neapolitan pizzas off a minimalist, ingredient-focused menu. Sauce-forward pizza with an extremely crispy locally-sourced crust.
Photo by Carlos Brandon
With its fast casual counter-service model, limited seating and strip mall location, Luna Pizzeria looks, at first glance, like the kind of place that does cheap personal pies for a tasteless and on-the-go lunch crowd — another Mod Pizza rip off with dollar store ingredients and pre-tossed dough in a freezer.

But looks, in this case, are deceiving. These are no fly by night pies. While the menu offers a "build your own" option, it's the six signature pizzas you need to set your sights on. Each is focused on one or, at most, a handful of simple ingredients. Toppings like sweet Italian sausage, small crispy pepperonis and four types of fresh mushrooms make up the contents of these beautifully authentic Italian pizzas. Pepperonis curl into small suction cups that crisp around the edges and crunch in your mouth.
Photo by Carlos Brandon
The dough, sourced locally from Angela's Oven, bakes thin and crisp, with a thick outer edge that stops just short of crunchy while retaining its bready charms. It is, and I say this sincerely, one of the best pizza crusts in Houston.

Unlike other sauce-conserving joints that do traditional Neapolitan with just smear of tomato sauce, Luna's pizzas are both sauce heavy and sauce forward. A wonderfully sweet marinara-style sauce coated our half-and-half large with margherita and pepperoni. Naturally, the sauce shone brighter on the near-cheeseless margherita, though was still rather pronounced on the more dairy-focused pepperoni — generously covered in it's crispy namesake ingredient. Chopped salad with soppressata salami, Parmesan, and Kalamata olives.
Photo by Carlos Brandon
While the menu is both short and minimalist, the kitchen does offer a small selection of Italian sandwiches and classic pizzeria salads. The chopped salad with soppressata salami, shaved Parmesan, Kalamata olives and artichokes is a highly Mediterranean option that pairs well with any of the houses' signature pies. Canned beer and a mild selection of wines are on the menu, not unlike the restaurant's dog-friendly sister concept.

Despite its lack of publicity, Luna has thrived in its understated Kirby strip mall location and has even expanded to a Heights location off Washington and a Galleria(ish) location on Westheimer west of Uptown. These hole-in-the-wall stores conceal what may be one of the city's best pies, and certainly a top contender for Houston's best crust. In the face of more formal competition, Luna gives the James Beard semi-finalists in town a run for their coal and wood-fired money.
KEEP THE HOUSTON PRESS FREE... Since we started the Houston Press, it has been defined as the free, independent voice of Houston, and we'd like to keep it that way. With local media under siege, it's more important than ever for us to rally support behind funding our local journalism. You can help by participating in our "I Support" program, allowing us to keep offering readers access to our incisive coverage of local news, food and culture with no paywalls.
Make a one-time donation today for as little as $1.