Thank Betty White for being a friend to animals at Angel Share. Photo by Taylor Hall


Mark your calendars because you don't want to miss these deliciously fun culinary happenings:

Betty White, one of America's most-loved comediennes and actresses, passed away of natural causes December 31, 2021, just a couple of weeks shy of her 100th birthday January 17. Americans were preparing to celebrate the milestone with her but now, it will have to be done in her memory.

In honor of the television star's life and commitment to animals, some Houston restaurants and bars are offering specials to raise money for rescues and animal rights organizations.

Angel Share, 924 Congress, will be offering happy hour all day, January 17, with half-off drafts, wells and wine by the glass with hot dogs and French fries, two of White's favorite foods. There will also be special Betty White Drink Yo Face Cocktails made with vodka, White's liquor of choice. Toast to Dolly's 76th birthday at Angel Share.
Photo by Claudia Casbarian
Then on Wednesday, January 19, the bar, which has art work of Dolly Parton by Kati Ozanic of Yak Werks, will celebrate another of America's sweethearts, Dolly Parton. Known for her heartbreakingly beautiful songs and involvement in child education and vaccine research, Parton's fans can drink to her birthday at Angel Share with half-off rose all day.

Etoile Cuisine et Bar, 1101-11 Uptown Park Boulevard, had already set aside the month of January to raise funds for Rescued Pets Movement with a special prix-fixe dinner. In honor of White on her 100th birthday, owner/chef Philippe Verpiand and wife Monica Bui have pledged to double the donation on January 17 by donating $14 of every special prix-fixe dinner menu sold that day. The four-course dinner is $65 per person, plus tax and gratuity.

Joining Etoile in raising funds for Rescued Pets Movement that day will be Ember & Greens, 9403B Katy Freeway. The restaurant will donate 5 percent of its sales from lunch and dinner January 17 to the animal rescue plus 5 percent of sales from its side company, Lola & Baxter, its own brand of healthy dog food and treats. Antone's Famous Po'Boys is continuing its H-Town Original Campaign with a signature sandwich in honor of its 60th birthday by rolling out the Billy F Gibbons Whisker Bomb Po'Boy January 17 at both its TC Jester and San Felipe locations. The sandwich is a collaboration between ZZ Top frontman and guitarist, Billy F Gibbons, and Antone's executive chef Alex Padilla.

The po'boy is made with buttermilk fried green tomatoes, harissa, chipotle mayo, goat cheese, spice mix, and arugula plus Billy F Gibbons' Whisker Bomb Have Mercy Sauce. It will be available through June 1 for $9.95. Proceeds from the sale of the sandwich will go towards The Clifford Antone Foundation, an organization out of Austin that is dedicated to preserving music culture and community by caring for elders and investing in youth.

Bowl and Barrel, 797 Sorella Court, is offering a $10 Kid's Bowl special Monday, January 17. It includes one hour of bowling plus rental shoes, a meal and a drink for kids 12 and under.

Oyster season is still here and Brennan's of Houston, 3300 Smith, is celebrating the bivalves with a Sip and Slurp event, January 18 from 4 p.m. to 7 p.m. Guests can sip bubbles and slurp raw or grilled oysters out in the courtyard. There is a contingency plan for inclement weather. Tickets are $45 and include oysters and bubbles selected by Brennan's Wine Guy, Rich Carter. 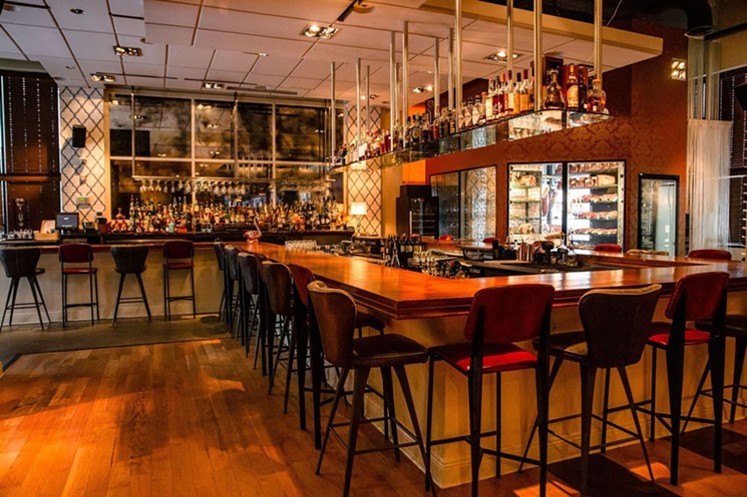 Saunter up to the bar and order a martini in your best British accent.
Photo by Kirsten Gilliam

For those who fancy themselves suave and debonair in a James Bond sort of way or just love the glamorous life, Doris Metropolitan, 2815 S. Shepherd, is hosting a Bond-themed black-tie affair January 20 beginning at 8:30 p.m. There will be photo ops, ice sculptures, swag bags and specialty cocktails for purchase at this high-end and chic Israeli steakhouse.

There is no cover charge but reservations are encouraged via Resy. Cocktail dresses and tuxedos are also encouraged. 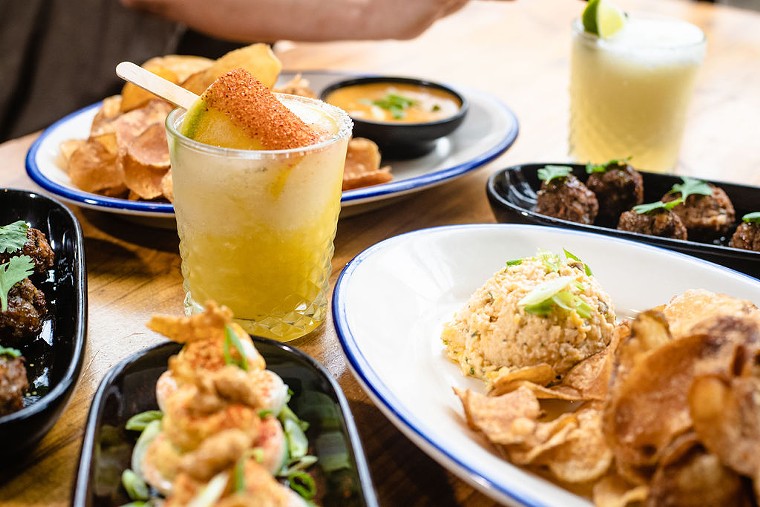 The Rustic has two Houston locations and both offer a daily happy hour from 3 p.m. to 6 p.m. That's correct, daily. That means that folks who work hard during the week and can't make it to the very short weekday happy hours around town can take advantage of drink and food specials on the weekend. The restaurant, bar and live music venue is offering $5 house margaritas, frozen or on the rocks. There are also $5 bar bites: meatballs, deviled eggs or queso, hot or cold.

For those with a little more scratch to spare, its Legendary Rustic Rita is only $9 for happy hour. It's made with Osadia Blanco and includes a Mango Patron Citronge Popsicle. The mango treat by itself is $3.

The Rustic also has some zero-proof sparkling soda mocktails such as the Desert Pear Spritz, Hibiscus Mockarita and Winter Sunshine for $3.95. They are available at its uptown location, 1121 Uptown Park, and its downtown spot, 1836 Polk. Feges BBQ goes whole hog with happy hour.
Photo by Julie Soefer
Feges BBQ in Spring Branch, 8217 Long Point, just launched a generous happy hour that runs Tuesday through Saturday from 3 p.m. to 6 p.m. Guests can delight in half-price select wines and $3 select beers. However, the best part is that the family-friendly restaurant is offering $10 happy hour prices on its BBQ Quesadilla, Chopped Brisket Sandwich, Pulled Pork Sandwich, Smoked Turkey Salad Sandwich and Rib Tips. The $10 happy hour deal also includes the Half-Size Whole Hog Plate which is Carolina-style whole hog with cracklin, mop sauce and charred coleslaw, all sitting on top of hog fat cornbread. You had us at cracklin then you took us all the way with hog fat cornbread. URBE's new Plato de Botanas gives a variety of street food bites.
Photo by Paula Murphy
URBE, 1101 Uptown Park Boulevard, has added some new menu items for dinner including its Plato de Botanas, a platter meant for sharing that offers a good sampling of Hugo Ortega's Mexican street foods with taquitos, gorditas, quesaditas, elotitos, garnachas and salsa. It has also added other noshes like Ostiones Callejeros, a half dozen fire-roasted oysters in Valentina butter with pickled vegetables, and Costillas de Peurco, a dish of wood-roasted pork ribs in salsa verde.

Camarones a la Diabla, spicy shrimp in adobo, is a new addition to the entree menu and guests can indulge in a delicious Spicy Sangrita, made with spiced tomato juice, lime, mezcal and Dos XX to accompany their eats.
click to enlarge Adobo shrimp can be added to the Spicy Sangrita for an additional charge.
Photo by Paula Murphy

The restaurant also has happy hour from 4 p.m. to 6:30 p.m. Tuesday through Saturday with $2 off select wines, beers and cocktails. It also has a good selection of happy hour bar bites including some new ones like the Camarones Enchilados and a happy hour version of the Plato de Botanas.
KEEP THE HOUSTON PRESS FREE... Since we started the Houston Press, it has been defined as the free, independent voice of Houston, and we'd like to keep it that way. With local media under siege, it's more important than ever for us to rally support behind funding our local journalism. You can help by participating in our "I Support" program, allowing us to keep offering readers access to our incisive coverage of local news, food and culture with no paywalls.
Make a one-time donation today for as little as $1.